U.S. heifer and steer slaughter totals are pushing the high for the year, but expectations are for those numbers to start to decline. Historically, beef animal slaughter peaks for the fall around the Labor Day holiday, and the trend looks to be holding this year. The last week of August saw the largest weekly slaughter totals for the year, and expectations are for those numbers to hold going into early September. Slaughter totals have been elevated by the movement of heifers into the feedlots as tough pasture conditions and high price feed inputs have limited the number of heifers going into the breeding herd. Recent Cattle on Feed reports are starting to reflect tighter placement numbers, and overall cattle supplies are expected to tighten going into the end of the year. In addition, demand for high quality beef has stayed supportive as packers have had to keep cash price relatively firm to secure supplies. In all, the projections for the end of the year and going into 2023 look supportive as cattle number will start reflecting the tightening supply. 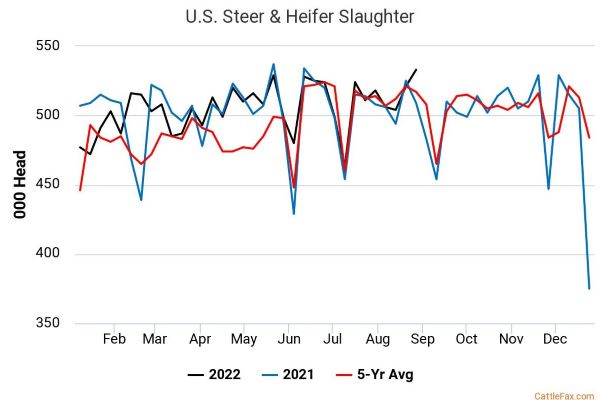 CORN HIGHLIGHTS: Corn futures trading with double digit gains throughout most of the session, ending the week with impressive gains. September surged higher on lack of deliveries, a weaker dollar, higher wheat prices and short covering. Bears may have been exiting today as commodities were gainers with higher energy prices a driving force, gaining nearly 3.00. September corn closed at 6.98-1/2, gaining 24 cents on the session and its highest close since June 22. September added 29-1/2 cents for the week. December corn added 16-1/2 cents for the session, closing the day 6.85, adding 19-1/4 cents from last Friday.

The new estimate for US ending corn stocks may end up being the lowest in ten years if yields and planted acres are lowered. The average estimate for the national corn yield is 172.4 bpa and a crop over 1 billion bushels smaller than last year’s. Yesterday’s report of ethanol production showed more active demand taking inventories down to 23.1 million barrels. Sharp gains in wheat and soybeans spilled into corn. On Monday the market will have new data to digest. DTN upped their yield with their digital rad now at 1.70 bpa, up near 3 from their estimate last month. The USDA July yield estimate was 175.4. Private firm Plant Labs is estimating yield at 177.6 bpa above their estimate last month of 176. They use a satellite imagery. The market may very well be putting in premium as the world keeps a focus on developments in Ukraine regarding the Zaporizhzhia nuclear power plant.

SOYBEAN HIGHLIGHTS: Soybean futures closed higher today as the dollar fell, crude oil made back some of its losses, and there was likely some short covering ahead of Monday’s WASDE report. Sep soybeans gained 18-3/4 cents to end the session at 14.89-1/4, and Nov gained 26-1/4 cents to 14.12-1/4.

The soy complex rallied today followed by strength from crude oil and a dip in the US dollar index. Today private exporters reported sales of 3.8 mb of soybeans for delivery to Taiwan during the 2022/2023 marketing year, and China is also rumored to have bought US soybeans for October-December delivery. China continues to lock down cities with the latest being Chengdu, a city of 21 million people as the country aims for the unattainable zero-Covid policy. Soybean demand at least has not shown signs of slowing as in addition to the US purchases of soybeans, they have been buying from Brazil as well as Argentina. Reports from the US Gulf harvest has shown some quality concerns over the crop with reports of sprouting and mold issues, and Monday’s WASDE report will shed more light on soybean yields and planted acres. The average trade guess for the bien yield is 51.5 bpa, from the USDA’s 51.9 bpa last month. The average trade guess for US bean ending stocks for 22/23 is 0.247 bb, from 0.245 bb last month. The weather forecasts look favorable for beans with rain in Nebraska, Iowa, Wisconsin, and Illinois, while much of the central Corn Belt and the West remain hot and dry once the cold front passes. Nov beans remain in their pennant formation but successfully closed above the 50-day moving average today.

Wheat led the way higher today. More concern about the Ukraine export situation may have played a part with talk that there will be meeting next week between Russia and Turkey to discuss the export agreement. So far, 70% of what Ukraine has exported has been corn, but the perception that those shipments may be cut off (in addition to wheat) have traders concerned. Overall, there is a lot of uncertainty as to how much wheat will ultimately be exported out of the Black Sea. There are still reports of Russia’s wheat crop being record large but to date their export pace has been well below what it would take to get to the USDA’s 42 mmt estimate. IKAR in Russia raised their production estimate to 97 mmt which is up 9 mmt from the USDA’s last estimate. Here in the US, planting conditions for the HRW crop are looking poor for this fall with dryness a big worry. As a reminder, Monday will feature the next USDA report at 11 AM central, which may provide some direction to the markets.

Money flowed into the cattle markets on Friday as the front month futures pushed through the highs for the week, setting up a possible challenge of the August highs just above the market. The improved technical picture and prospects of tighter cattle supplies will keep the market supported going into next week’s open. Cash trade was quiet on Friday, with most activity seemingly done for the week. This week saw light to moderate trade developing in most areas with northern dressed deals at $226 up to $227, which is mostly $2.50 lower than last week’s totals. In southern trade, live business was at $141, about steady with last week’s price levels. Estimated slaughter numbers are peaking at the end of August going into September. This was expected, given the higher placement number this spring, influenced by a large heifer placements total. The market is anticipating slaughter to peak and number to tighten post-Labor Day. The demand for higher quality beef is still a market factor supporting prices as packers are still staying aggressive to meet that demand. This is still measured by a Choice/Select spread trading over $20.00. Retail values were lower on Friday. At midday, choice carcasses dropped 0.77 to 257.24 and select was 0.02 lower to 236.02. The load count was light at 79 midday loads. Feeder cattle saw additional price recovery and buying strength to end the week, despite a strong trade in grain markets. Talk of a strong cash market tone in the feeder market helped bring buyers into the mix. The Feeder Cash Index turned 1.17 higher to 180.31 yesterday and Friday’s numbers were still unavailable. This helped support the feeder market. Sept feeders were trading at a $2.00 premium to the index and that could keep prices limited to the upside or tied to the index as September expiration is around the corner, but if index and cash prices are trending back higher, this gives the front month futures room to work higher overall as well. Friday’s trade was very supportive and should keep the buyers active going into next week. The cattle market may be looking to the USDA WASDE report on Monday and the next corn crop production numbers and the results of that report on the grain market will likely bring volatility into Monday’s trade.

October hogs had positive gains for the second session in a row, closing above the 200-day moving average on Thursday, which brought additional short covering. This may be tied to the premium of the cash market over the Oct futures or the on-going rolling of short October positions into deferred contracts. For December, price fought of early selling pressure and turned higher, posting a bullish hook reversal on the bottom of the chart. Follow through next week will be key off of today’s price action. There is still no sign that a near-term low is in place. The market will need additional buying strength and may need to have improved fundamentals for that low to get established. The cash trade is still trending lower, and midday direct cash trade was softer again on Friday. Morning direct trade was 3.59 lower to 90.59 and a 5-day rolling average of 94.97. The Lean Hog Cash Index continued to slide, reflecting the recent cash weakness, losing 1.22 to 100.26. Oct futures are still trading at a 7.085 discount to the index and could limit the downside pressure in the futures, but compared to direct trade, October is now at a premium, and the weak cash tone is still a concern to the market. Retail values turned firmer at midday on Thursday, 1.82 to 104.26 as prices have trended higher this week. Today’s midday load count was moderate at 223 loads. The estimated hog slaughter for today was 480,000 head, up 49,000 from last week, which was influenced by the Labor Day holiday and 14,000 from last year. The hog market is still in the process of trying to forge a bottom. The market is volatile and has been open to big swings in price. The fundamentals will need to be consistently firm for the market to feel more optimism. Retail values have seemed to stabilize, but the trend in the cash market keeps our near-term bias defensive.

DAIRY HIGHLIGHTS: The second month Class III chart is testing a break above $21.00 again, as the October contract added 99 cents this week. It’s Class IV counterpart was no slouch with a gain of 77 cents in the first full week of September with a $24.40 close, keeping a large premium intact. It was a big week in the spot markets with the block/barrel average up more than 11.00 cents to push to a seven-week high. Meanwhile, spot butter traded to a new all-time high at $3.17/lb on a 7.00 cent gain as powder continued its recovery with a 5.50 cent jump. On Monday, the USDA will release the September WASDE report, which is likely to add fuel to the volatile grain/feed markets, but otherwise it will be a quiet week for fundamental updates.