The impact of the Russia-Ukraine war is showing on grain exports, as expected. Ukrainian grain exports for the month of March (the start of the conflict) has tumbled nearly 70% from the totals in the month of February. Exports in February were estimated at 5.0 MMT and dropped to 1.4 MMT in March. The March total was still ahead of market expectations, which was forecasting a range of 600,000-800,000 mt total for the month. Most of these shipments have been accomplished by rail, as Ukrainian ports are closed due to the war. The expected drop in grain exports has fueled the most recent rally in grain prices, and as the conflict continues, the market will hold value as the demand for Ukrainian grain supplies shifts to other exporters. 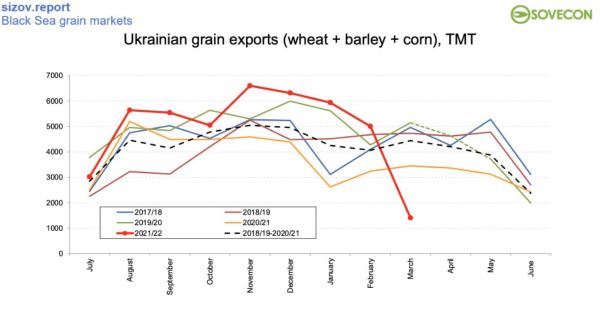 CORN HIGHLIGHTS: Corn futures ended the session in the black gaining 1-1/4 to 9-1/2 cents higher as December 2023 lead today’s gainers, closing at 6.38. July gained 3-1/4 cents to close at 7.50 and December added 4-1/4 to score another new contract high close at 7.09. December 2022 is up against channel line resistance. Expectations for more demand out of China have not yet been rewarded. The USDA WASDE report is due out tomorrow at 11:00 central. Ending stocks are expected at 1.4 bb and if this is accurate would be 40 mb less than last month.

Export sales at 30.8 mb old crop and 0 new crop were termed solid but not outstanding. This is the third week in a row where exports have been slower suggesting higher prices are keeping buyers apparently only buying as needed. This compares to four and five weeks ago, when sales were yearly highs, a reflection of concern of war in Ukraine. While that concern is still there and impactful, Brazil’s second crop corn is coming along well with Conab increasing the production estimate today to 115.6 mmt (4.555 bb) from the previous estimate of 112.34 mmt. The market is already expecting 115 mt according to pre-USDA report figures. In bushels this is an increase of 128.4 mb. Rising bird flu cases and lockdowns in China due to covid are keeping prices in check. Rain is forecasted for the Panhandle regions of Texas and Oklahoma where conditions remain in either extreme or excessive drought. The longer-range outlook remains above normal in temperature and below normal in rainfall.

SOYBEAN HIGHLIGHTS: Soybean futures found positive news in the form of a slight reduction in the Brazil soybean crop estimate by CONAB, which dropped production from 122.77 mmt to 122.43. Many private estimates hold near 120 mmt. Some support comes from a 6-10 day forecast that has most of the Midwest above normal in precipitation suggesting some intended early plant acres will not be so early. Meal was mixed with soybean oil showing good strength today, adding nearly 120 points. May soybeans added 26 to close at 16.45-1/2. November gained 22-1/4 to end the day at 14.66-1/4.

Tomorrow the USDA WASDE report is expected to show carryout near 254 mb for the 2021/2022 season. World ending stocks are anticipated to come in at 88.4 mmt, down from 90 last month and 101.7 a year ago. We anticipate a supportive report, but it likely expected and therefore could be considered old news. The recovery in November soybeans in three of the last four sessions suggest the trade is getting concerned acres intended for soybeans could switch back to corn. Export sales today at 29.4 mb were solid bringing year-to-date totals to 2.062.9 bb or 98.7% of expected sales of 2.090 bb. We would not be surprised to see exports increased on tomorrow’s report. November soybeans are up against resistance at the 21-day moving average at 14.66. A push above this technical resistance could set the stage for a move to 14.85. Currently November has reached just above a 50% retracement of the recent low of 13.94 and high of 15.20-1/4.

There is little fresh news for the wheat market to go on today, which may in part have caused the trade to set back. It is also likely that the market is seeing some profit taking ahead of tomorrow’s WASDE report. While there are no major changes expected for wheat, surprises are always a possibility and traders may have wanted to step aside beforehand. The pre-report estimate for US wheat carryout is pegged at 654 mb – this compares to 653 mb in March. Export sales also remain sluggish with the USDA announcing an increase of 5.7 mb for 21/22 and an increase of 8.2 mb for 22/23. It is possible that on tomorrow’s report the USDA will again lower exports due to poor performance. It was anticipated that the US would pick up some of the slack due to the reduction in Black Sea exports but so far that has not been the case with other countries stepping in. India’s Ag Minister said they could export up to 11 mmt of wheat vs the USDA’s estimate of 8.5 mmt. The bull needs to be fed, so to speak, and without new headlines the market may be stagnating. That is not to say that a bullish tone does not remain in place though. For one thing, as the war continues, each day that passes is one less day in which grain could be shipped out of the Black Sea. Here in the US, low winter wheat crop ratings remain a bullish factor as well. And those ratings are derivative of a larger issue, that being drought conditions in the US plains. As of today, the warm and dry conditions look like they will worsen, and strong winds could also be a detriment to the crop.

CATTLE HIGHLIGHTS: Cattle futures finished mixed to mostly higher on Thursday, as additional short covering brought some more price recovery to the markets, especially deferred contracts. Apr live cattle gained 0.300 to 138.000, and Jun was 0.125 lower to 134.100. For feeders, May lost 0.475 to 159.475.

Other than June cattle, live cattle futures saw some money flow again on Thursday. June futures failed to hold an early bid, which could be tied to short positions rolling out of April into the next month. The weak price actions could keep the June contract in a consolidation pattern, but if a bid returns, recovery could have Jun futures looking to test resistance up to $135.300 and the 200-day moving average, a key barrier. The cash market has stayed light this week, with little business again on Thursday, and likely wrapped up for the week. On the week, the market has marked most trade at $138 and $222 dress trade, fully steady with last week. Today’s slaughter totaled 124,000 head, slightly heavier last week, but 4,000 greater than a year ago. This heavier slaughter pace is keeping pressure on the market in general. Boxed beef values have been trading firmer but were caught a light bid at midday with Choice gaining 0.44 to 271.48 and Select adding 0.33 to 261.38 on movement of 53 loads. The USDA released weekly export sales on Thursday morning and new net sales of 14,000 MT for 2022 were down 39% from the previous week and 43% from the prior 4-week average. Japan, South Korea, and Mexico were the top buyers of U.S. Beef last week. Feeders saw bear spreading with good buying strength in the deferred contracts. May feeders are likely tied to the index, which gained .05 to 155.59, but is running at a discount to front month futures. A firm close in the corn market weighed on the front month feeder contracts. The action of grain markets after Friday’s USDA Supply and Demand report will likely be the key to price action for livestock markets going into the weekend. The markets are trying to put in a turn, and some of the price action today maintained a turn in the trend. Charts are still weak overall and are still very susceptible to a test of the recent low.

June hogs stayed in a consolidation pattern, building a “bear flag”, as the Jun hogs challenged but stayed below the 50-day moving average. This keeps the door open for a test of the 100-day and trendline support as low at $104. June is holding a strong premium to the cash market, and the market is content to possibly take that premium out. The cash market trade was firmer in midday trade. National Direct midday values were 0.85 higher at 100.23, and the 5-day average is at 100.36. The Lean Hog Index was lower, losing 0.58 to 101.08. The Apr contract expires on the 14th and was supported by its discount of 2.030 to the cash index. Pork carcass values were firmer at midday, jumping 7.79 to 112.16 on a load count of 130 loads. The strong midday retail move wasn’t enough to support the front-end of the market. Weekly export sales were improved with new net sales of 41,200 MT for 2022 were up 49% from the previous week and 44% from the prior 4-week average. Mexico, China, and Japan were the top buyers of U.S. pork last week. The hog market got some favorable news on Thursday, but it was still difficult for front-end prices to rally. The deferred strength likely reflects the projected overall tight hod supplies, and strength in long term grains. Overall, the market is still searching for a low.

DAIRY HIGHLIGHTS: Class III milk was lower today with the second month contract closing down 15 cents at $24.70. Spot cheese hit a new high for the move of $2.31125/lb, making 2022 just the third year ever where the block/barrel average has traded above $2.30/lb among 2014 and 2020. Spot whey was 1.75 cents higher today and has seemed to at least take a temporary pause in its recent downslide. Cheese prices continue to get help from solid demand news and, consequently, Class III milk has persisted just under the 2014 highs. We will remain cautious at these price levels especially with the potential seasonal weakness entering spring and keep rewarding the sturdiness in contracts out into 2023.