Weekly export sales brought some surprises to the soybean market as sales were well above expectations. For the week ending November 10, total soybean sales for the week were 3.03 MMT. This was well above the high end of expectations at 1.7 MMT. In total, the U.S. has sold 35.9 MMT of soybeans for the marketing year, which is 4% over last year on this week. The strong sales were likely the impact of the recent dollar weakness moving U.S. soybeans into a more competitive spot in the marketplace. A large portion of the sales were bought “under the table” in orders that were below the required reporting levels, but rumors were rampant of strong Chinese buying in the market last week. Apparently true as China and unknown destinations purchased nearly 2 MMT of those sale, with Mexico adding 450,000 Mt. A trend the soybean market will be watching to see if it continues. 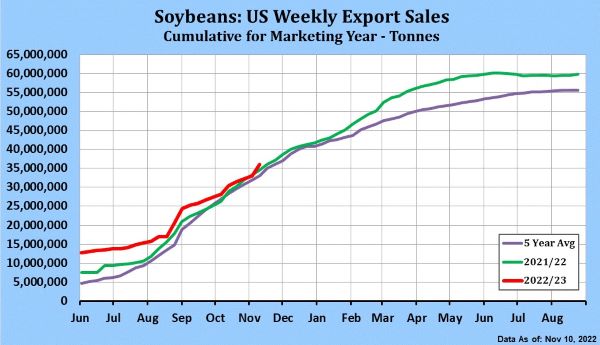 CORN HIGHLIGHTS: Corn futures reversed from their lows just before the close and ended higher on the day. News that the Black Sea grain deal would officially be extended brought prices lower, but solid corn exports gave the market fundamental support. Dec corn gained 2-1/4 cents to end the session at 6.67-1/2, and March gained 1-1/2 cents at 6.69.

Although news that the Ukrainian export corridor would be extended should not have come as a huge shock, markets turned lower nonetheless. Russia has agreed to extend the pact allowing Ukrainian exports to leave out of the Black Sea for another 120 days. In exchange, promises were made that any obstacles to Russia’s ability to export their own grain and fertilizer would be removed. Despite the renewal of the agreement, Russia continued to heavily fire on more key Ukrainian targets today. Corn export sales were good offering support and the final numbers for last week were 46 mb with 36 mb going to Mexico. Shipments lagged the weekly total needed at only 22 mb, and total corn commitments are down 52% from a year ago. Yesterday Mexico purchased an additional 49 mb of corn which will reflect in next week’s export sales. Ethanol production fell last week to a five-week low of 1.011 million barrels per day which comes at the same time that crude oil and veg oil prices are falling. Further bearish pressure comes from Brazil and their potential record crop which has been receiving favorable weather conditions. March corn is trending sideways to slightly lower but has respected and closed above the 100-day moving average which is acting as support.

Soybeans should have been on track for a higher close after today’s export sales report revealed a massive 111 mb of soybeans were exported last week, but pressure from world oil markets, reignited recession fears, and a slowing demand from China sent the soy complex lower. Soybeans have recently been largely supported by the high price of bean oil and the historically high crush margins. Bean exports have begun to slip and Brazil will begin to take a bigger slice of the export business in the coming months. As for bean oil, palm oil has fallen by 10% in the past week and crude oil has dropped to just over 81 dollars a barrel, falling over 3.50 a barrel today. This downward momentum has put significant pressure on bean oil and crush margins leaving soybeans vulnerable to lower prices. Domestic recession fears along with concerns over China’s sagging economic state has worried traders as well. There was hope that China would begin to relax their strict Covid policies but now with infections breaking out in Beijing along with other major cities this will be postponed. The Brazilian crop has been planted under nearly perfect conditions and may show record production, although drought in Argentina and some dryness in some parts of Brazil may be detrimental. Between Brazil and Argentina, the USDA is projecting a combined 1.17 bb production. Jan beans are trading sideways to lower but have remained above their 100-day moving average which has acted as support.

The wheat market was under pressure on the overnight as an agreement was reached on extending the Ukrainian Grain deal. Even though this was mostly anticipated, the news still triggered selling pressure across the wheat complex. Prices tested key support levels of $8.00 for Dec and $8.20 for March, and those levels help on the day.  Price action overall is still negative, and the possibility of testing longer term trendline support is still in the cards at $7.80 under the December contract. Weekly export sales registered new sales of 290,300 MT for 2022/2023, with primarily for Mexico, Japan, and Chile the top buyers of U.S. wheat last week. Exports totaled 118,600 MT for the week. Export numbers did tick up on the week, likely tied to the recent weakness in the U.S. dollar, but still lackluster overall. Year over year, sales are down 7% from last year at a combined 12.7 MMT, as the U.S. struggles against cheaper global competition. Fresh bullish news is still difficult to find in the wheat market overall, but just moving past the Ukrainian grain deal extension could build some support as the market likely had it priced in. The focus shifts to the global demand and weather as there are still key production areas in question beyond the Southern Plains in the U.S. In general, both US and global wheat supplies are limited and should offer support to the market.

Money flow resumed in the cattle market on Thursday, building some optimism in prices. The cattle market is looking toward the Cattle on Feed report on Friday after the market close. Expectations are for the cattle supply to reflect continued tightening. Total cattle on Feed are expected to be 98.3% of last year, Placements down 96.3% of last year, and marketings at 100.8%. The placement and total cattle numbers will stay the focus of traders for both the near and long-term. A strong cash market tone helped push prices higher. Southern trade was reported at $151-152, which was higher than early week trade. The Northern trade was $154, also firer than early week bids. Retail values were higher at midday, as choice carcasses gained 1.03 to 258.12, and select trade added 1.63 to 232.98 on light movement of 71 midday loads. Weekly export sales saw new net sales of 13,400 MT for 2022 and net sales of 3,800 MT for 2023. Shipments were 18,200 mts. Canada, South Korea, and Hong Kong were the top buyers of U.S. beef last week. Today’s slaughter totaled 129,000 head, even with last week, but 7,000 greater than a year ago. Feeders finished with strong gains, supported by the live cattle market and weaker tone in grain market. The feeder chart saw a technical breakdown on Tuesday but quickly erased that with the strength and strong price action today, likely triggering some short covering. With November expiring, January is the new lead month, a closed with a strong technical signal with resistance at the 200-day moving average at 181.700 above. The Feeder Cattle Index traded 0.41 higher to 175.39. Strong couple of days for the cattle market fueled by the strength in cash and price optimism going into the cattle on feed report.

LEAN HOG HIGHLIGHTS: Lean hog futures were mixed to mostly higher on Thursday as the December contract stays pressured, and more price optimism is building in deferred contracts. Dec hogs slipped 0.600 at 84.975, but Feb was 0.450 higher to 90.350.

February hogs kept the short-term up trend pushing higher for the fourth consecutive day and is looking to challenge resistance at 92.00. Buying strength is reflecting the possible improved demand and tighter hog numbers as the market moves into late winter. The Dec contract is still pressured by fundamental weakness. Retail values where firmer at midday, pork carcasses traded .16 higher to 93.79, as prices have trended lower this week. The load count was moderate 158 loads. The Pork Carcass Index was softer, losing 0.07 to 95.93. The retail market was looking optimistic that prices may have been looking for a seasonal bottom, but today price action still has the market searching. Weekly export sales were reported on Thursday and didn’t provide any price incentive. USDA reported new net sales of 25,200 MT for 2022, and 1,000 mt for 2023, as Japan, Colombia, and South Korea were the top buyer of U.S. pork. Despite talk of looking for more pork imports, China was inactive in last week’s sale report. Direct cash trade was lower on Thursday, losing 2.40. The direct trade averaged 83.12, and a 5-day rolling average of 84.36. The Lean Hog Index was softer, losing 0.31 to 88.22. The cash index holds a 3.245 premium to the futures, which could provide support for the front month contract. Prices are trying to push back to the upside, and strong price action today should lead to additional strength. The fundamentals are still the key, especially if retail values can find a seasonal bottom. The money flow seems to be liking the deferred futures vs the front month December at this time overall.

DAIRY HIGHLIGHTS: After a nice turnaround so far in November, the dairy markets took a small breather today. While the block/barrel average is back over the $2.10/lb mark where it fizzled in early October, the second month Class III chart is again struggling at the $22.00 point. Next week is flush with reports before the holiday as both October Milk Production and Dairy Products Production will be released on Monday, followed by October Cold Storage numbers on Tuesday. Until then, the only drivers are the daily buyer and sellers in the spot market trade which showed light volume again today.