Output and stockpile projections for the week ending July 29 are based on six analyst estimates compiled by Bloomberg.

Corn Shipment Out of Ukraine on Track

The first on-water shipment of corn out of Ukraine since the start of the war–which departed from Odessa yesterday–has so far progressed without incident, opening the door for more shipments to make their way out of the war-torn country. “Another 15 ships are lined up to follow it as they seek to finally exit Ukraine ports after being trapped there since February,” Arlan Suderman of StoneX says in a note, adding that each of these ships are carrying roughly 10,000 metric tons to 60,000 tons of grain. However, Suderman adds, it’s still unclear about the path vessels will take on their journey back to Odessa, and issues about ensuring the ships and hiring adequate crews to run them remain.

The first ship carrying Ukrainian grain to world markets was sighted in the Black Sea off the coast of Turkey on Tuesday, a Reuters witness said, ahead of an inspection scheduled for Wednesday morning.

The vessel, the Sierra Leone-flagged Razoni, left the Ukrainian port of Odesa on Monday and the Turkish Defence Ministry said it was expected to reach the entrance to the Istanbul straits around 9 p.m.

Canada’s wheat and canola crops are faring better than expected after spring planting was hampered by weather that was too wet or too dry.

“The crop caught up a bit in July, it’s not as far behind as it was,” said Neil Townsend, FarmLink’s chief market analyst. “We think the outcome is going to be a good crop.”

The turnaround comes after crops in Canada’s western Prairies faced lingering drought conditions at the start of the season and parts of Saskatchewan and Manitoba were walloped with a series of storms and below-normal temperatures. Canada is the world’s largest canola grower and a major wheat exporter.

U.S. corn yields are estimated at 176 bu/acre and production at 14.417 billion bu, according to a survey from brokerage StoneX. 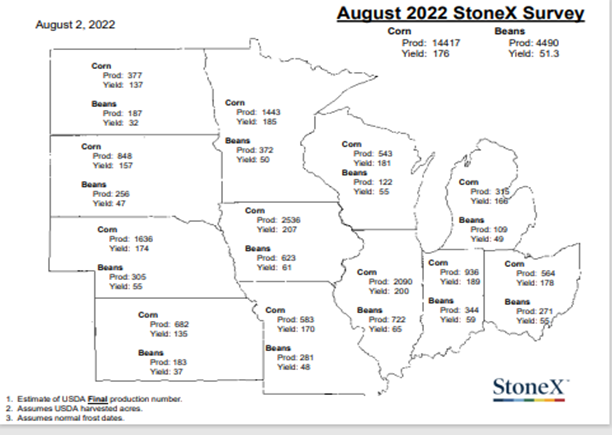 The Brazilian unit of grain merchant Bunge BG.N has agreed to supply Brazil’s oil major Petroleo Brasileiro SA PETR4.SA, known as Petrobras, with soyoil for production of “Diesel R5,” according to a statement on Tuesday.

Bunge said it started supplying soyoil to Petrobras in July, adding initial tests will demand some 1.5 million liters of it.

“Around 12 million tonnes have already been harvested as of the end of July. We expect to harvest up to 20 million tonnes of wheat alone, which is fivefold more than domestic needs. Therefore it is crucial for us to help farmers safeguard and deliver the new harvest,” Shmyhal was quoted as saying by Ukrainian media at a government meeting on Tuesday.

Resumption of agricultural product exports from the Port of Odesa is important in connection with this, he said.

“First of all, this provides the ability to increase foreign currency revenue and the income of businesses. Not only in the agricultural sector, where hundreds of thousands of people work, but in related industries, as well. The second aspect: Ukraine remains an important player on the global food market,” Shmyhal said.

According to the Ukrainian Agrarian Policy and Food Ministry, 48-50 million tonnes of grains could be gathered in the country’s new harvest on the whole.

The Ukrainian Grain Association also forecasts wheat and corn exports for the 2022-2023 agricultural marketing year at 10 million tonnes each and barley exports at 2 million tonnes.

The Purdue University/CME Group’s agricultural sentiment index increased to 103 points in July from 97 in June, according to a survey of 400 agricultural producers.

EU soft-wheat exports during the season that began July 1 totaled 1.84m tons as of July 31, compared with 1.66m tons in a similar period a year earlier, the European Commission said Wednesday on its website.

Crop quality varies widely with southern areas of the province in better condition than areas further north, the province’s agriculture ministry says Tuesday in a report.

CME Group Inc. is considering new wheat futures as traders shy away from the existing Black Sea contract due to Russia’s invasion of Ukraine, according to people familiar with the matter.

The Chicago-based bourse, one of the world’s largest derivative exchanges, has been consulting with traders and brokers on starting a contract for Romanian wheat, said the people, who asked not to be identified because the information is private. No final decision has been made and talks may not result in a new product, they said.

The move comes after interest in the current Black Sea contract — based on the price of Russian wheat — tumbled following the invasion of Ukraine in February. While the existing futures are cash settled, many grain traders and agricultural processors have steered clear of any deals involving Russian products.

The new Romanian contract would be cash settled and based on price assessments by S&P Global Platts, the people said. Negotiations are at early stages, and recent news of the first grain shipment to sail from Ukrainian ports earlier this week may help provide relief to market participants who would prefer to stick to the existing contract.

Supplies of fertilizer from Russia, outside of ammonia, have returned to near-normal levels, CF Industries CF.N executive Bert Frost said on Tuedsay, after Moscow’s invasion of Ukraine disrupted shipments.

Gas prices have surged since Russia’s invasion of Ukraine in February, with Moscow squeezing supplies to Europe in response to Western sanctions. Gas is the main input for nitrogen-rich ammonia fertilizer, while urea is a basic product of those plants.

Fertilizer Europe, which announced the output curbs on Tuesday, is calling on the European Union to move away from Russian gas, energy and raw materials. The industry body didn’t name the companies that have curtailed production.

In July, the European fertilizer giant Yara International announced it had curtailed several sites due to the energy crisis and warned of more cuts. Similarly, Borealis, another European producer, earlier said it was considering plant halts for economic reasons.

Fertilizer Europe urged the EU to pay close attention to fertilizer application in the coming season to maintain the region’s agricultural advantages in the face of drought conditions.

Lebanon will release a ship carrying barley and wheat flour after authorities concluded the grains weren’t stolen from Ukraine.

The Syrian-registered Laodicea was seized last week after Ukraine’s embassy said the cargo originated from Zaporizhzhia, Mykolaiv and Kherson in southeastern Ukraine and was loaded at Feodosia in the Russian-occupied peninsula of Crimea.

The investigation “didn’t prove the existence of a criminal offense, as it was not found that the goods were stolen,” Public Prosecutor Ghassan Oueidat said in an interview. The ship’s owner “came to the investigation and handed over papers and documents that showed no suspicions about the goods.”

Nitrogen Import Demand to Pick Up

Nitrogen prices should firm into 4Q, due to crop seasonality and sharply higher input costs. A strong dollar has made an already pricey crop input more expensive. Ammonia prices are forecast to rise into the winter, albeit countered by the additional supply from Saudi Arabia’s Ma’aden. European gas futures suggest an ammonia cost of production above $1,600/mt free on board (FOB) in 4Q, though we expect significant demand destruction at that level to temper the price gain. Russian fertilizer continues to flow at levels higher than initially expected following the February invasion, but at prices $5-$20 per metric tons (mt) below the spot market.

Chinese urea exports, officially banned through May, appear unlikely to resume significantly in 3Q despite a five-year operating-rate high. 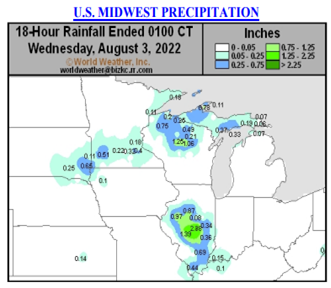 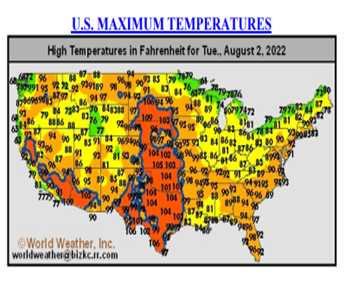 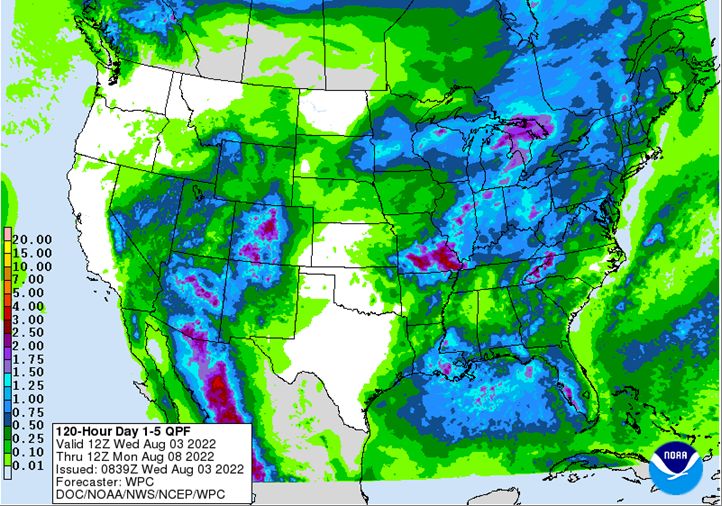 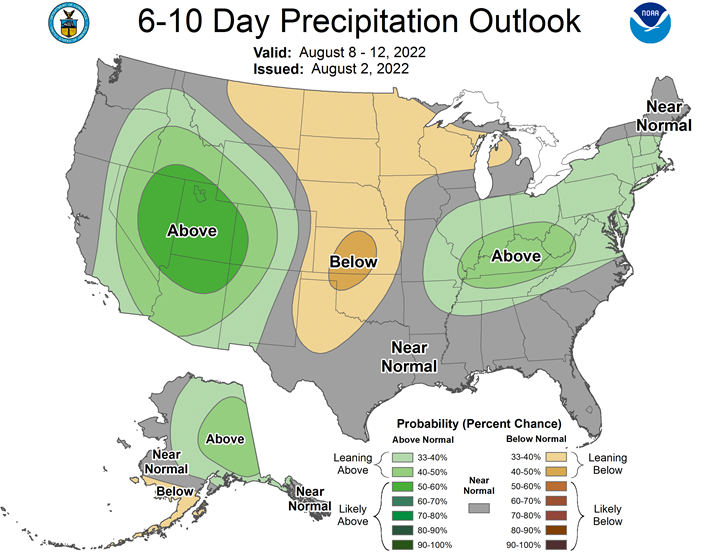 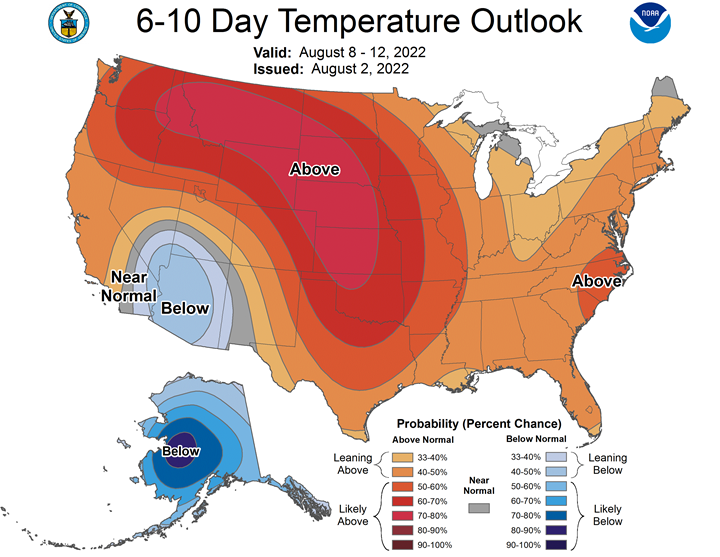 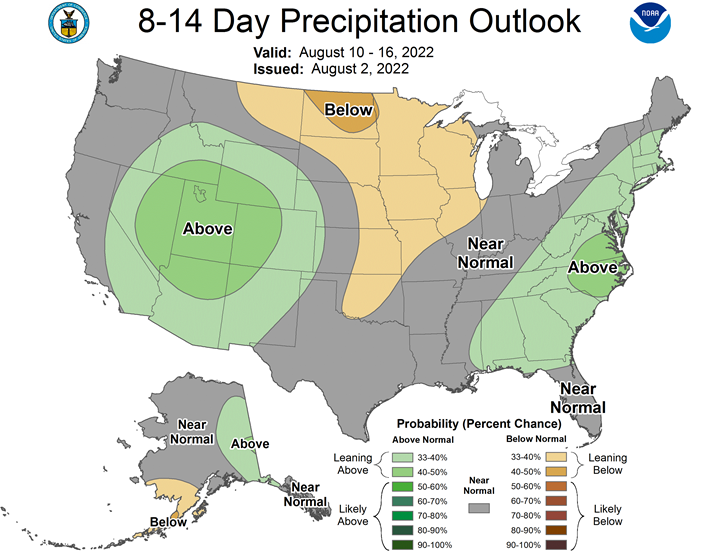 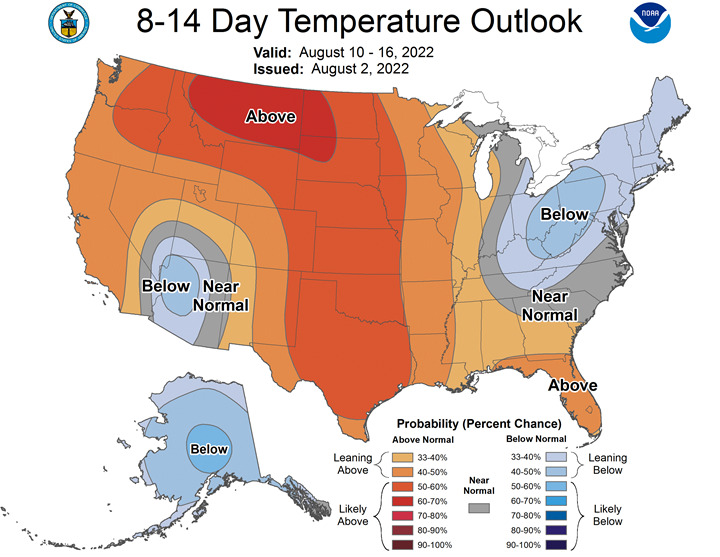