US Export Sales of Soybeans, Corn and Wheat 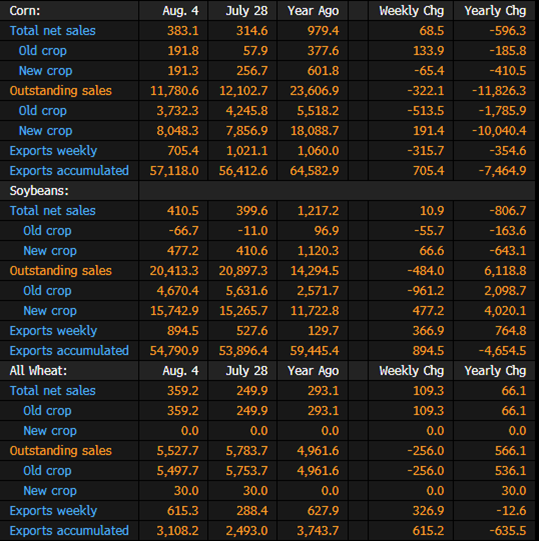 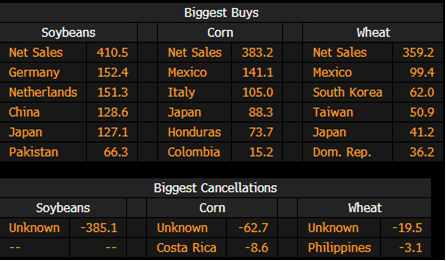 China lowers estimate for its soybean imports in the 2021-22 year from the previous month due to weak demand for soybean meal, according to the latest China Agricultural Supply and Demand Estimates.

Ukraine expects a vessel for grain loaded for Africa to arrive at Pivdennyi port on Friday, the country’s Infrastructure Ministry said on Facebook. 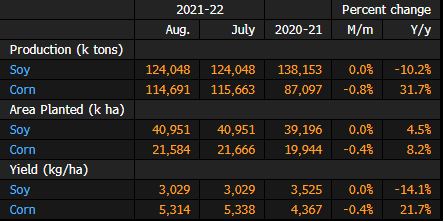 The European Union’s corn harvest will plunge to a 15-year low as drought gripping the continent parches fields, according to analysts at Strategie Grains.

The outlook for the crop has “deteriorated drastically” since last month, the French firm said Thursday in a report, slashing its production estimate by 15% to 55.4 million tons. Key growers including France, Romania and Hungary have been plagued by heat waves and a lack of rain this summer, hampering crops during their vital growth phase.

The shrinking corn harvest will tighten feed supplies for the region’s livestock herds, boosting costs for farmers already grappling with soaring energy costs and labor shortages. Meat prices in the EU jumped more than 11% in June from a year earlier, the fastest pace in data spanning two decades.

The EU often imports corn from Ukraine, even in years of better production. Some seaborne cargoes began flowing from the Black Sea country this month under a newly negotiated crop-export deal, but its grain shipments remain well below normal amid Russia’s invasion.

“For several years now, Ukraine has been the principal maize supplier to EU countries,” Strategie Grains said. “However, for the coming months, a great deal of uncertainty surrounds Ukraine’s capacities to export, because of the ongoing conflict.”

The European Commission in July forecast this year’s EU corn harvest at 65.8 million tons. The following is a table of the latest estimates from Strategie Grains:

China is taking steps to accelerate imports of Brazilian corn, bringing on a new supplier of the grain at a time when the war in Ukraine has disrupted trade and tensions with the US are soaring.

Beijing will temporarily waive a key clause which paves the way for Brazil, the biggest exporter behind the US, to ship corn to China in the coming months, according to people familiar with the matter. This follows a deal in May that guarantees Brazil access to the world’s top grains market over the long term.

That agreement, which took years to conclude due to phytosanitary concerns, requires the Brazilian government to provide guidance to farmers on chemical application and crop management prior to seeding to ensure growers take measures to avoid diseases. China will waive this condition for the current season, said the people, some of whom asked not to be identified because they’re not authorized to speak publicly. If the rule still applied, it would hinder shipments as it was imposed after the start of planting.

Corn producers and exporters were informed of China’s decision by the Brazilian agriculture ministry in a meeting on August 5, according to Sergio Mendes, head of the Associação Nacional dos Exportadores de Cereais, a grain shippers’ association, and Glauber Silveira, executive director at the Associação Brasileira dos Produtores de Milho, a farmers’ group.

Both the Brazilian and Chinese agriculture ministries didn’t respond to requests for comment from Bloomberg News.

China has been seeking to diversify its corn imports, of which about 70% came from the US and 30% from Ukraine last year. The move to boost purchases from Brazil comes as Ukrainian supplies have been cut off from the world market by Russia’s invasion and as tensions between China and the US rise, fueled most recently by the visit of US House Speaker Nancy Pelosi to Taiwan earlier this month.

China already buys most of Brazil’s soybeans, another feed ingredient for its massive hog herd. The Asian nation has a history of shifting away from US agricultural supplies at a time of escalating tensions, such as in 2018-19 during a trade war, and has a broader goal to reduce reliance on a single supplier.

“It’s pretty clear Beijing is looking to smooth the path for Brazilian corn in order to replace corn that it would typically source from Ukraine,” said Even Pay, an analyst at consultancy Trivium China in Beijing.

“Beijing is worried about its high degree of dependency on the US for corn and other agricultural commodities,” Pay added. “It’s extremely unlikely that Beijing would be looking to cut off US corn imports. Beijing also wants to keep some kind of a floor under the relationship.”

China’s state grain traders are negotiating the first corn cargoes from Brazil, said some of the people, who asked not to be named. Supplies will likely come from Brazil’s 2021-22 crop and are set to arrive later this year, they said.

Despite the waiver, China hasn’t lowered the bar on sanitary requirements as the nation made it clear that cargoes with any disease listed as intolerable by local authorities will be turned away, said Mendes, head of the exporter group known as Anec. But it’s not demanding measures before the seeding anymore.

“The corn will need to be free of plagues anyway,” Mendes said by phone. First shipments should be made in the second half of the year, he added.

“Even though this crop ended up far from its potential because of dry weather, we have plenty of corn to export,” Silveira said by phone. Brazilian corn is about $17 a ton cheaper than US prices, according to Commodity3 data.

Brazil is expected to reap 114.7 million tons of corn this season, the national supply company Conab said Thursday. The harvest is almost finished.

Soyoil imports by the top edible oil buyer more than doubled from a month earlier to record 519,566 tons in July as uncertainty over palm shipments from Indonesia prompted traders and refiners to boost purchases of the soft oil from Argentina and Brazil, according to a processors’ group.

French Corn Ratings Decline, Worst for This Time in a Decade

The share of France’s corn crop that’s in good or very good condition dropped to 53% as of Aug. 8, crops office FranceAgriMer said on its website.

Well-timed rainfall has improved the outlook for grain production in the key growing state, with wheat output seen slightly higher than an earlier forecast, according to the Grain Industry Association of Western Australia.

Cropland Prices Soar With More Buyers From Outside Agriculture

Cropland is a growing asset class and demand for farms is outpacing available supply, according to a Federal Reserve Bank of Chicago report Thursday.

Farmland values rose 22% in the second quarter of 2022 in the district that includes all of Iowa and most of Illinois, Indiana, Michigan and Wisconsin, adding to double-digit gains in the previous two quarters. The rise also comes after Russia’s invasion of Ukraine in February sent crop prices soaring to the highest levels in a decade or more.

“Buyers from outside agriculture were helping to push farmland values higher,” said David Oppedahl, senior business economist at the Fed in Chicago.

Drought Exposure Eases in US Corn and Soybean Areas 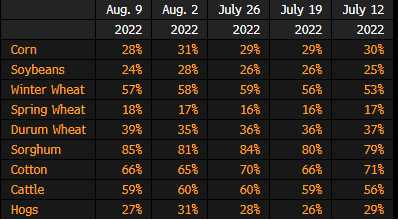 110,000 hens to be slaughtered after bird flu found on German farm

About 110,000 chickens are to be slaughtered after an outbreak of H5N8 bird flu on a farm in north Germany, authorities said on Thursday.

Vechta is a major region for poultry production. A three kilometre lockdown area has been imposed around the farm plus an observation area with a ten kilometre radius, the council said. These areas contain 352 farms.

The spread of bird flu around the globe has raised concerns among governments and the poultry industry due to its ability to ravage flocks, generate trade restrictions and the risk of human transmission.

France’s farm ministry in June removed bird flu-related restrictions on poultry farming across the country, citing a halt in outbreaks after the worst-ever crisis of the highly contagious virus led to the culling of 16 million birds. (Full Story)

Risk to humans from the disease is considered low, but past outbreaks among farm birds have needed extensive slaughtering programmes to contain it.

Chances for La Niña are expected to gradually decrease from 86% in the coming season to 60% during December-February 2022-23, a U.S. government weather forecaster said on Thursday.

The La Niña weather pattern is characterized by unusually cold temperatures in the equatorial Pacific Ocean.

India Cumulative Monsoon Rainfall 8% Above Normal as of Aug. 11

India has so far received 588.5 millimeters of rains during the current monsoon season, which runs from June through September, compared with a normal of 543.9 millimeters, according to data published by the India Meteorological Department on Aug. 11. 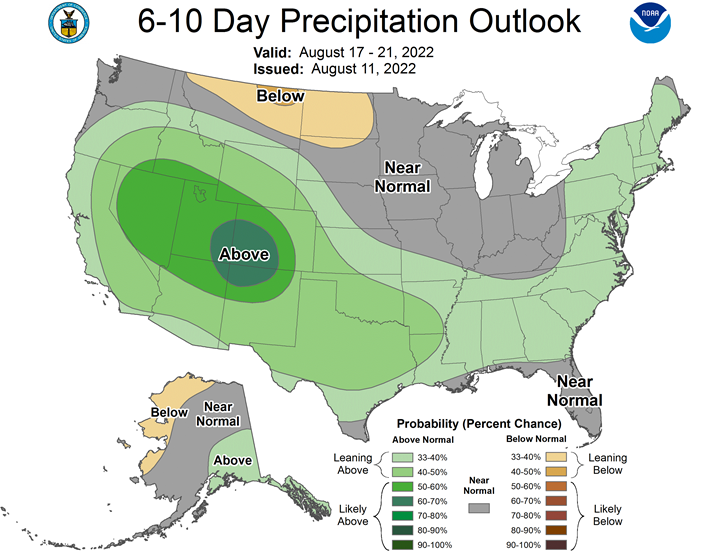 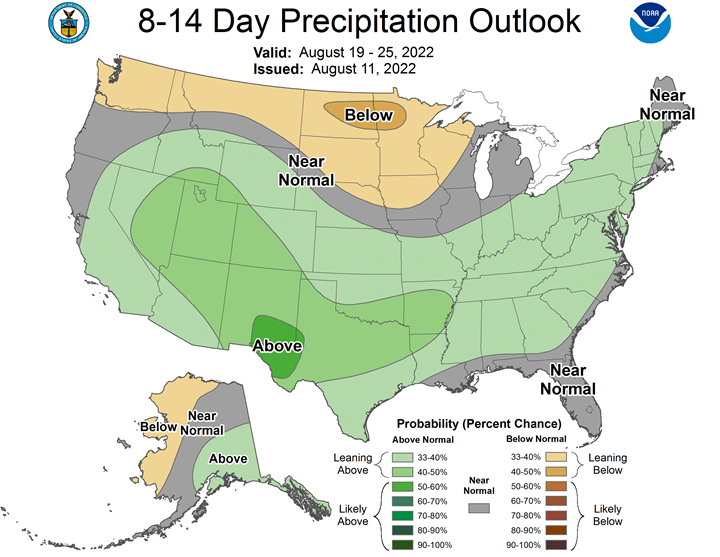 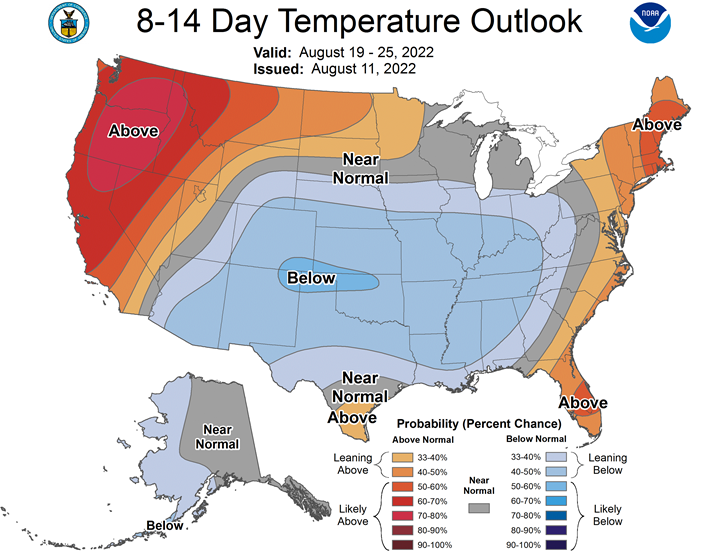