The U.S. soybean processing pace rebounded in July from a nine-month low the prior month although crushings fell short of the average trade forecast, according to National Oilseed Processors Association (NOPA) data released on Monday.

Some soy processing plants have been taking seasonal maintenance downtime ahead of the upcoming harvest. The soy crush in July was larger than the prior month in Illinois, Iowa and in the Southeast and Southwest regions, but fell in eastern and northern Midwest states and in the northern Plains, NOPA data showed.

Soyoil supplies among NOPA members as of July 31 declined by more than expected to 1.684 billion lbs, an 11-month low. The stocks were down from 1.767 billion lbs at the end of June but up from 1.617 billion lbs a year ago.

Soyoil supplies at the end of July were expected to have tightened to 1.713 billion lbs, according to the average of estimates gathered from seven analysts. Estimates ranged from 1.600 billion to 1.807 billion lbs, with a median of 1.725 billion lbs.

US Crop Progress and Conditions for Aug. 14 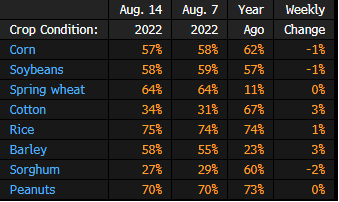 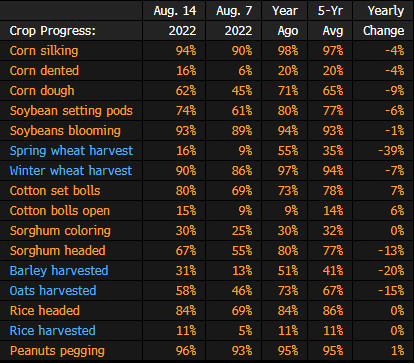 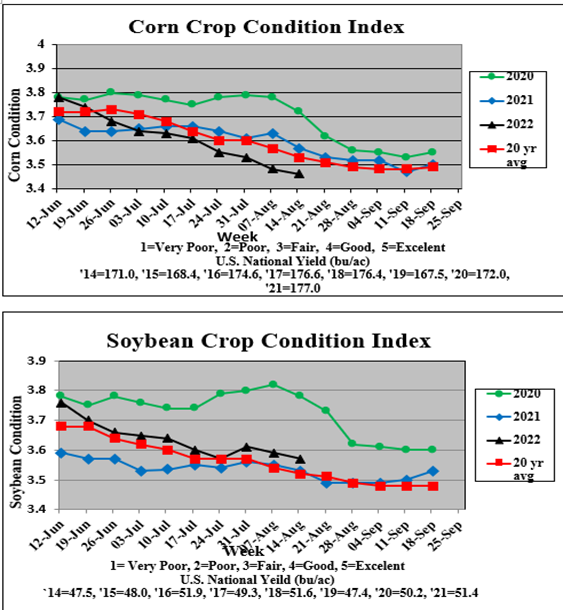 US Inspected 538k Tons of Corn for Export, 745k of Soybean

In week ending Aug. 11, according to the USDA’s weekly inspections report. 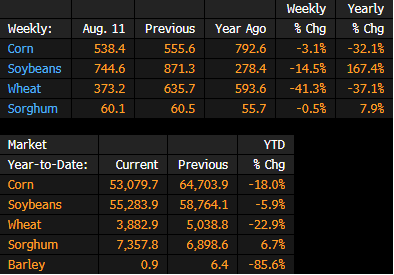 Ukraine can export 3 million tonnes of grain from its ports in September and may in the future be able to export 4 million tonnes from them monthly, Deputy Infrastructure Minister Yuriy Vaskov said on Tuesday.

He said Ukraine had received applications for 30 ships to come to Ukraine in the next two weeks to export grain.

Ukraine’s grain exports have slumped since Russia invaded on Feb. 24 and blockaded Ukrainian Black Sea ports, but three Black Sea ports were unblocked last month under a deal between Moscow and Kyiv that made it possible to send hundreds of thousands of tonnes of Ukrainian grain to buyers.

Brazilian corn ethanol output is estimated at 4.5 billion liters in the 2022/2023 season, up 31% from the last, according to industry group Unem.

Corn ethanol will account for an estimated 15% of overall ethanol output in Brazil if that projection is confirmed, Unem data showed. Most of Brazil’s ethanol still comes from sugarcane.

Monday’s shipment is the third DDGS consignment out of Paranagua ever, the port authority said. Two previous cargoes went to the United Kingdom and Turkey.

The first report of a Brazilian DDGS shipment was in 2019, when 27,000 tonnes where shipped via Paranagua, according to data from Brazil’s waterway transport agency Antaq compiled by the port authority.

In the following year, two cargos totaling 56,251 tonnes were sent from Paranagua and Santos port, the data showed. In 2021, almost 118,000 tonnes were shipped from private ports in Sergipe and Amazonas, according to the same data set.

In the seven months of 2022, and not including Monday’s cargo, about 101,400 tonnes of DDGS were shipped mainly through Imbituba, a port in Santa Catarina state, the Paranagua port authority said.

Brazil Center-South corn harvest was at 80% a week earlier and 70% a year ago, consultancy firm AgRuyral said in a report today.

Russia Wheat Export Down 13% Y/y So Far This Season: IFX

The sowing activities of this year’s wheat crop have ended in Brazil, and the national output is forecast to be a record, which is pressing down quotations in the domestic market. On the other hand, abroad, prices have been underpinned by data showing worse crops conditions in both the United States and Europe and concerns about exports from Ukraine.

In Brazil, Conab has once again revised up the estimates for wheat area and crops productivity and production this year (2022/23 season, which begins this month). The output is forecast to total 9.16 million tons, 19.3% higher than that in the previous season (2021/22). This results from both the larger area (+8%) allocated to wheat crops in Brazil, currently at 2.96 million hectares, and higher productivity (+10.5% up from that in 2021/22), at 3.096 tons/hectare.

Despite the record harvest, wheat imports continued estimated at 6.5 million tons, leading to a domestic availability of 16.38 million tons. Consumption in Brazil is forecast at 12.27 million tons, a record too. Conab forecasts Brazil to export 2.5 million tons of wheat between August/22 and July/23. Thus, ending stocks would total 1.61 million tons in July/23.

BRAZILIAN MARKET – Liquidity has been low in Brazil, where agents from mills are buying wheat only for the short term, waiting for the new crop to arrive at the market.

As for crops, according to Conab, 99.1% of the national wheat crop had been sown by August 6th.

Bayer says it will continue supplying Russia with agricultural inputs

Germany’s Bayer BAYGn.DE said it has decided to continue supplying Russia with essential agricultural inputs, reversing course from comments made in March that supplies for 2023 would be contingent on Russia stopping its attacks on Ukraine. (Full Story)

The world’s largest seed and pesticide firm said in a statement on its website that its move is aimed at “helping prevent what could become an unprecedented food crisis” and that access to Russian food is essential in this respect.

Bayer in March stopped all spending in Russia and Belarus not related to essential products and threatened to withhold essential supplies like seeds and pesticides if Moscow continued its “unprovoked attacks” on Ukraine. (Full Story)

Its about-turn on Monday comes in the wake of a deal signed by Russia, Ukraine, the United Nations and Turkey on July 22 to allow grains exports through three Ukrainian Black Sea ports previously blocked by Russia’s Black Sea fleet.

Fertilizer prices continue to slide, portending price relief ahead of the US fall season. Cornbelt retail ammonia costs are down 30% since July 1 while corn prices are strengthening, which should push fall anhydrous demand up 8% year over year. Brazilian potash imports are tracking 33% above 2021 amid reports of full warehouses and muted farmer demand.

On-Farm Ammonia Price Relief in Sight, Use to Rise

Farmers looking to apply anhydrous ammonia this autumn will see year-over-year price relief while producers get a demand boost. US growers base the application decision on the ammonia-to-corn price ratio. The most profitable use rate for an Iowa corn farmer this fall is expected to rise 8.5% to 179 pounds per acre from 2021’s six-year low. Retail ammonia prices, down 30% since July 1, are still historically high despite the seasonal reset in July. Ammonia gave back 2Q’s Russian-war-related gains but higher feedstock costs this winter risk additional price increases. US growers directly apply about 4 million short tons of ammonia annually. Volume fluctuates with crop area, price ratios and weather.

Thailand to Import Fertilizers From Saudi on Supply Concern

Thailand plans to buy fertilizers from Saudi Arabia to build up the nation’s inventory amid tight supply and price increases.

Australia’s Bureau of Meteorology says this is due to both renewed cooling in the tropical Pacific Ocean as well as climate models indicating La Nina is likely during the austral spring and early summer, according to Climate Driver Update from the Bureau.

India Cumulative Monsoon Rainfall 9% Above Normal as of Aug. 15

India has so far received 633.1 millimeters of rains during the current monsoon season, which runs from June through September, compared with a normal of 579.1 millimeters, according to data published by the India Meteorological Department on Aug. 15. 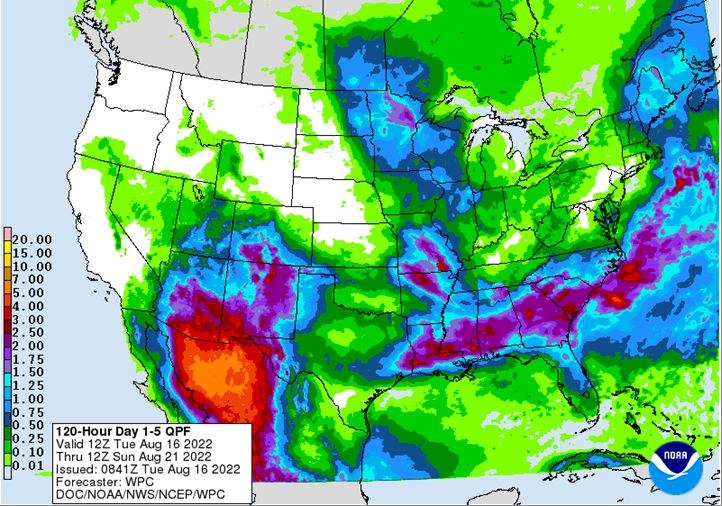 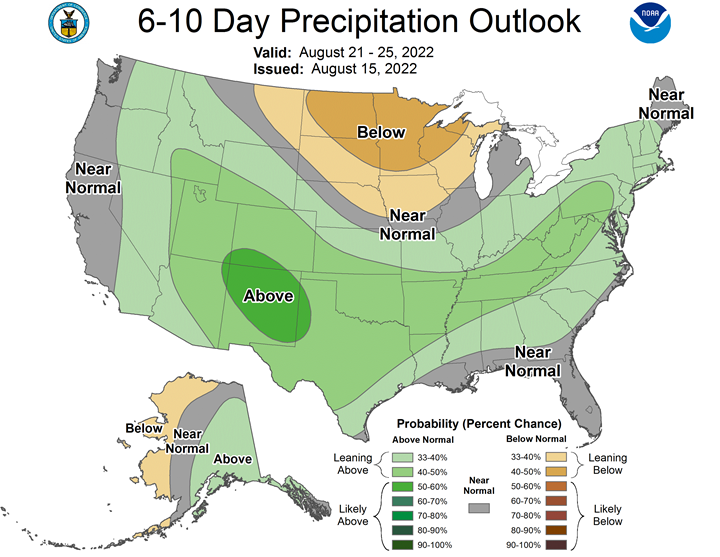 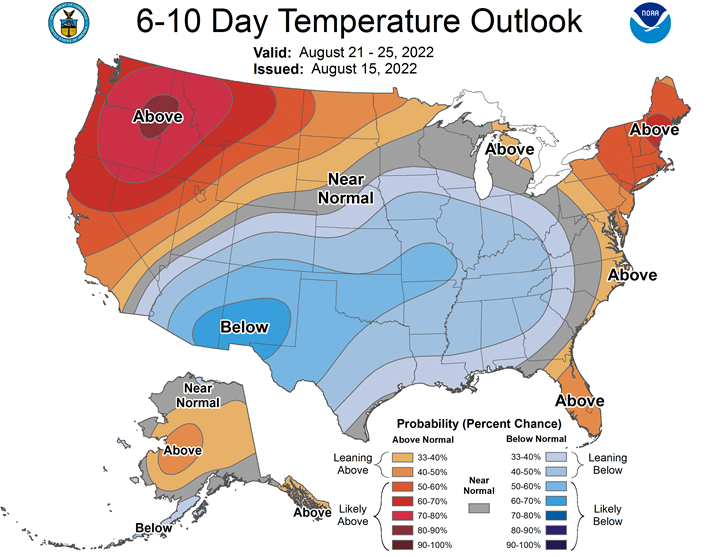 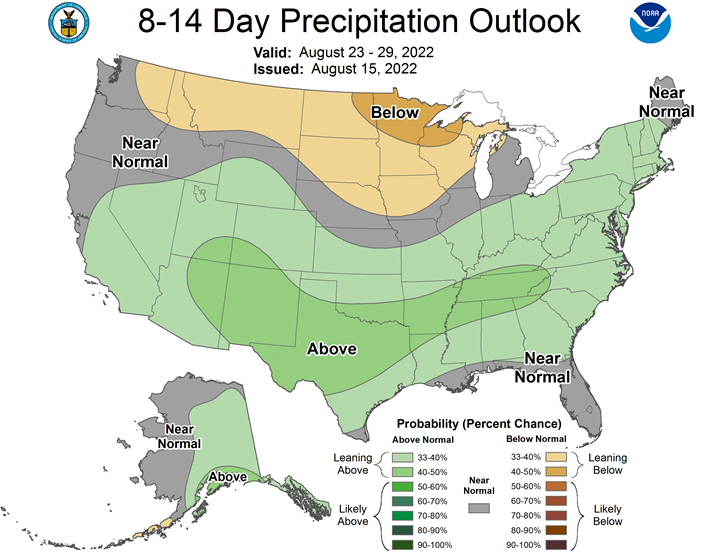