A lack of enough rain has stressed corn and soybeans along a southeastern route in South Dakota, with yield potential looking below average, according to scouts on a Pro Farmer Midwest Crop Tour.

Corn yields in Ohio are estimated to average 174.2 bu/acre based on 130 fields sampled, down from 185.1 bu/acre seen last year, according to Pro Farmer crop tour.

Excess rain during the spring that delayed seeding work in Ohio increased the variability of the corn and soybeans crops, according to scouts Monday on the eastern route of the Pro Farmer Crop Tour.

US Crop Progress and Conditions for Aug. 21 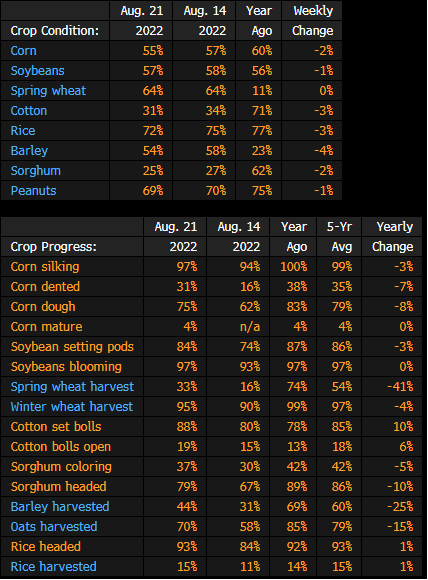 US Inspected 741k Tons of Corn for Export, 687k of Soybean

In week ending Aug. 18, according to the USDA’s weekly inspections report. 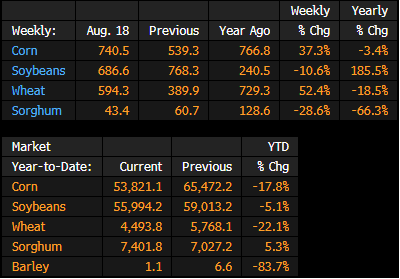 The following is from the USDA Farm Service Agency’s August report. 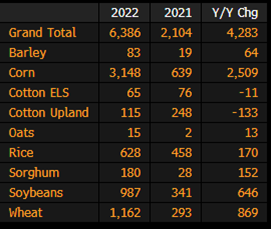 Ukraine’s corn harvest will likely total 24m tons this year, down 12% from the previous forecast in July of 27.3m tons, the Ukrainian Grain Association said in a statement on its website.

The Ukraine corn harvest is now seen at 26.5m tons, up 0.8m tons from a prior outlook, Kyiv-based analyst UkrAgroConsult says in a note.

Around 720,000 tonnes of food have left Ukraine under grain export deal

A total of 33 cargo ships carrying around 719,549 tonnes of foodstuffs have left Ukraine under a deal brokered by the United Nations and Turkey to unblock Ukrainian sea ports, the Ukrainian agriculture ministry said on Tuesday.

The Joint Coordination Centre in Turkey that monitors implementation of the agreement put the total amount of grain and foodstuffs exported from three Ukrainian Black Sea ports since the deal was reached at 721,449 tonnes.

Ukraine’s grain exports slumped after Russia invaded the country on Feb. 24 and blockaded its Black Sea ports, driving up global food prices and prompting fears of shortages in Africa and the Middle East.

Three Black Sea ports were unblocked under the deal signed on July 22 by Moscow and Kyiv. (Full Story)

In addition to the vessels that have already left Ukraine, the agriculture ministry said a further 18 were now loading or waiting for permission to leave Ukrainian ports.

In a separate statement, the ministry said exports of key Ukrainian agricultural commodities had fallen by almost half since the start of the Russian invasion compared to the same period in 2021.

This compares with 85.4% a week earlier and 79.1% a year ago, according to an emailed report from consultancy firm AgRural.

The pace could have been faster, but rains recorded in Sao Paulo, Parana and especially Mato Grosso do Sul state slowed down the work, AgRural said

EU soft-wheat exports during the season that began July 1 reached 3.75m tons as of Aug. 21, compared with 4m tons in a similar period a year earlier, the European Commission said Monday on its website.

China’s long heatwave and drought is posing a “serious threat” to the country’s autumn crops and everything possible should be done to try to expand water availability, the agriculture ministry said in a notice posted on Tuesday.

The notice called on local authorities to “dynamically adjust” scheduling plans and make good use of water to guarantee supplies during a critical period for the autumn harvest.

It said more rockets should be made available to seed clouds and that machinery and motorised wells can be deployed to deliver water to regions that have no sources of their own. Regions with severe crop damage are also urged to replant.

Kazakh farmers have harvested 3.3 million tonnes of grains from 13.9% of the sown area so far during their harvest, the grain-exporting Central Asian nation’s agriculture minister, Yerbol Karashukeyev, said on Tuesday.

Grain yield has grown to 1.46 tonnes per hectare this year from 0.91 tonnes last year, he told a government meeting.

Germany’s grains harvest forecast at about 43m tons this year, up nearly 2% from a year earlier but still “significantly” below the 2014-2021 average, farming lobby DBV says in preliminary estimate.

The cold front that hit Brazil in the last days brought along frosts to some wheat-producing regions, bringing concerns to farmers, majorly those whose crops are blooming or in the grains-filling stage. However, it is not possible to assess the effects of the frosts on the quality of the wheat. So far, crop estimates are positive.

The harvesting has begun in Paraná State, and activities are forecast to step up in September. According to data from Seab/Deral, 87% of the crops in PR are in good conditions; 11%, in average conditions; and 2%, in bad conditions. In Rio Grande do Sul, wheat sowing ended last week, according to Emater.

Based on data from Conab (Brazil’s National Company for Food Supply), between July August 8 and 12, the import parity price for the wheat from Argentina delivered to Paraná State was USD 400.49/ton. Considering the average of the US dollar in that period, at BRL 5.1018, the wheat imported was sold at BRL 2,043.19/ton, while for the Brazilian wheat traded in Paraná, the average was lower, at BRL 2,026.35/ton, according to data from Cepea. In Rio Grande do Sul, the import parity for the product from Argentina would be of USD 376.04/ton (BRL 1,918.48/ton), against BRL 1,957.73/ton on the average of the state surveyed by Cepea.

Production raised by 786,000 tons from the July est., Agriculture and Agri-Food Canada says Monday in an emailed report. 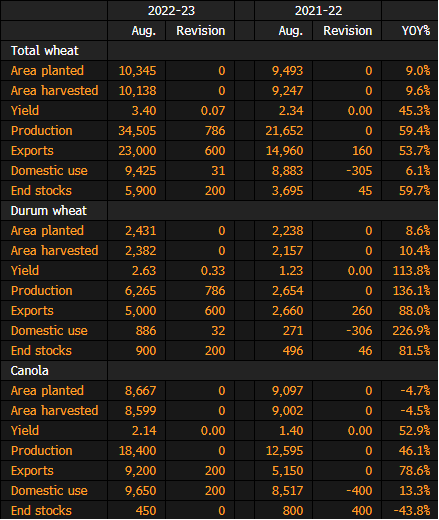 Yields of the staple grain will fall 16% below the five-year average, the bloc’s Monitoring Agricultural Resources unit said in a report Monday. That compares with a July forecast for a 7.8% decline.

The plunge in local production likely will boost the cost of feeding livestock herds, adding to the hurdles for farmers grappling with bulging energy and fertilizer bills. Meat prices across the bloc leaped 12% in July versus a year earlier. Milk, cheese and eggs also are soaring at record rates.

Read more: What Europe’s drought means for the price of meat and milk.

“Water and heat stress periods partly coincided with the sensitive flowering stage and grain filling,” according to the EU report. “This resulted in irreversibly lost yield potential.”

Earlier this month, the US Department of Agriculture said it expected the EU to overtake China as the world’s top corn buyer in the 2022-23 season.

Pastures are drying up across the continent, and many countries are restricting irrigation. Most of France — one of the EU’s agriculture heavyweights — saw less than 20 millimeters (0.8 inches) of rain from July through mid-August and twice the usual number of hot days, MARS said.

Farmers in the world’s second-biggest rice grower have planted the crop on 34.37 million hectares (85 million acres) of land as of Aug. 18, a decline of 8.3% from a year earlier, according to the farm ministry.

The area allocated to sugar cane has risen to 5.53 million hectares, from 5.45 million a year earlier, while cotton planting has increased to 12.43 million hectares from 11.65 million, the ministry said late on Sunday.

The country’s June-September monsoon rains have been 9% above average as of Aug. 22, according to the India Meteorological Department. Monsoon crop sowing normally begins in late May and peaks in July, while harvesting starts in late September. 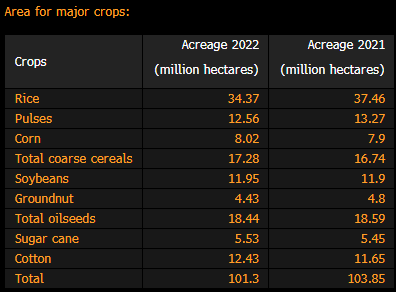 Most nitrogen prices are up after aggressive summer fills, yet are down sharply from spring highs, portending relief ahead of the US fall season. Plunging urea prices and energy restrictions in China have shuttered production sites, removing the risk that nitrogen’s marginal producer will return to the export market in 2H.

Rising power prices and restrictions will keep urea’s marginal producer from the global market in 2H. Urea production is unprofitable for coal-based suppliers. Chinese urea prices are $344 per metric ton (mt), $40 below the cost of anthracite-coal-based urea production. Industry operating rates began their seasonal fall and plummeted to 61% from 77% in July. The Chinese urea export ban officially ended in May. We expect limited production and port inventory will curb export potential in 2H, typically China’s largest export window. Through July, Chinese urea exports are 874,895 mt, down 67% from last year.

US Stocks of Beef, Pork and Chicken in Cold Storage 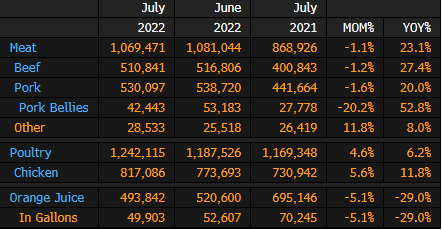 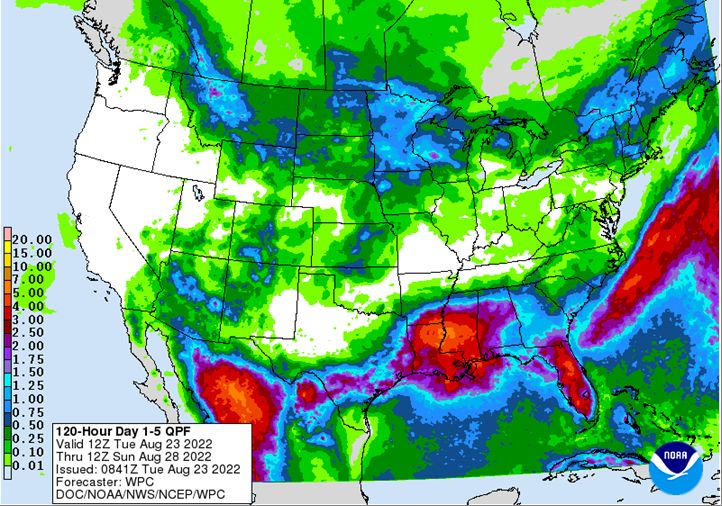 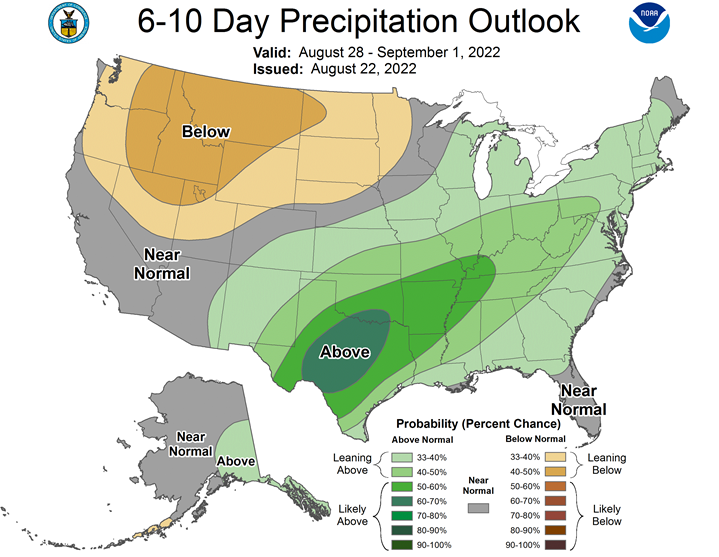 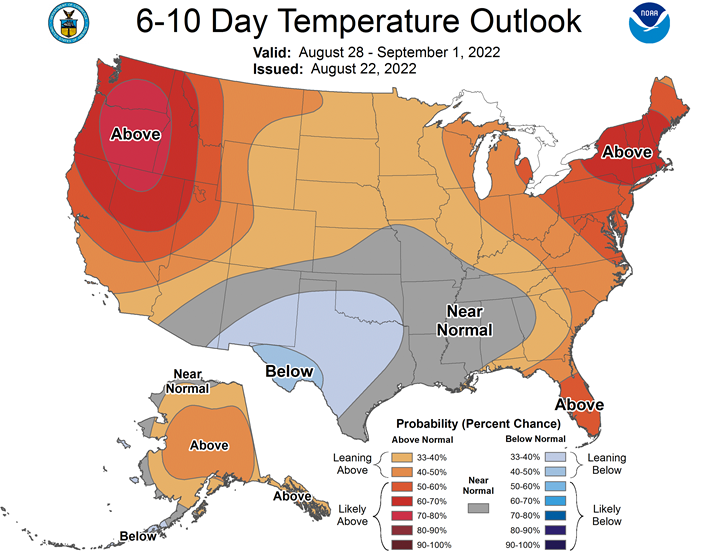 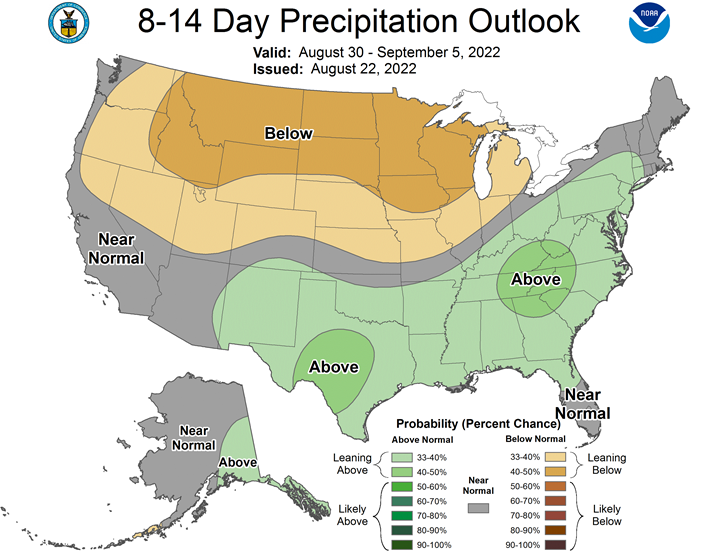 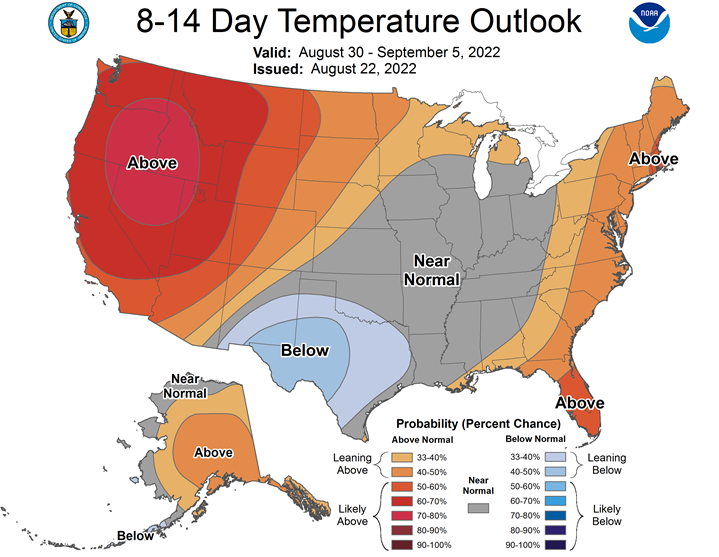