Estimate ranges are based on a Bloomberg survey of four analysts; the USDA is scheduled to release its export sales report on Thursday for week ending Aug. 18.

Corn yields in three western Iowa crop-districts are lower from estimates a year ago after a total of ~192 samples taken on third day of Pro Farmer Crop Tour.

Corn yields in Illinois are estimated to average 190.7 bu/acre based on 245 fields sampled, down from 196.3 bu/acre seen last year, according to Pro Farmer crop tour.

The following tables are based on data from the Pro Farmer Midwest Crop Tour, that runs Aug. 22-26. 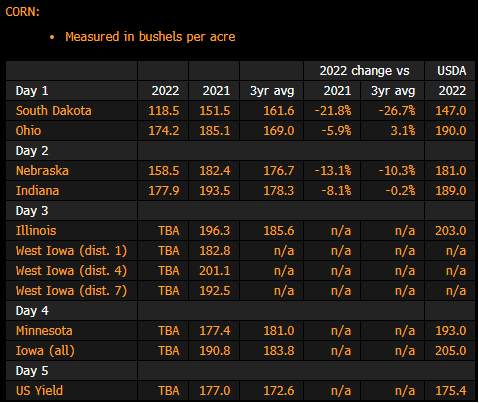 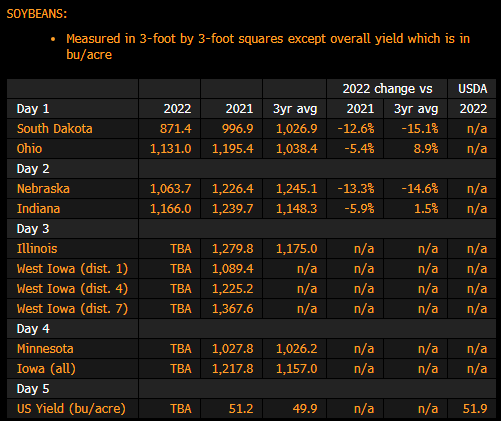 Production may rise 21% compared with 124m tons estimated for 2021-22 season, according to a report from Conab, Brazil’s national supply company.

Ukrainian grower HarvEast is planning to plant 1,500 hectares of winter crops rye, wheat, and barley on the non-Russian occupied land they now control for the 2023 harvest, compared with the usual 5,000 hectares for the area, CEO Dmitry Skornyakov said in an interview.

India will curb shipments of wheat flour to cushion consumers in the world’s second-biggest user of the grain from rising prices, the government said in a statement after a cabinet meeting on Thursday.

Statistics Canada is scheduled to release its first estimates of this year’s Canadian crop production on Monday at 7:30 a.m. CDT (1230 GMT), based on a model.

Most crops are expected to be bigger after severe drought shrunk production last year. 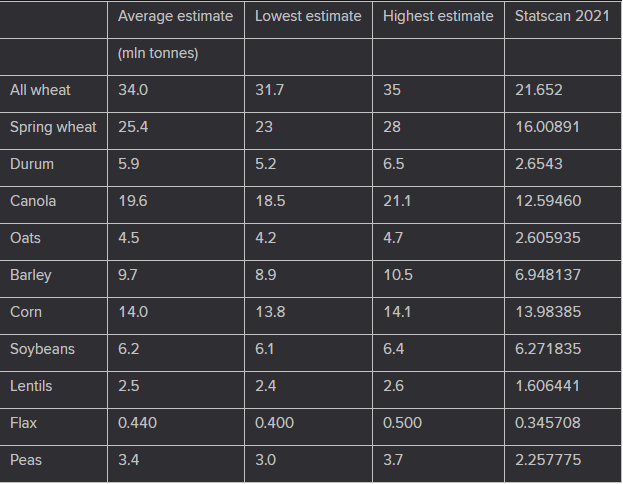 Following is a table of Malaysia’s palm oil export figures, according to estimates by independent cargo surveyor SGS Malaysia Sdn.

The good news is that Ukraine’s crucial grain is leaving its ports again. The bad news is that farmland lost to the war and weak local prices are threatening its next wheat harvest.

Ukraine is one of the top wheat growers, so the amount it produces will be key to determining if global supplies stay tight next year and also an important driver of world food prices.

Planting of 2023’s crop kicks off around this time of year and it’s still early days, but the Ukrainian Agribusiness Club said about a third of last year’s wheat area has been lost due to the invasion. It warned that farmers may cut plantings further if sales remain slow.

“Domestic prices are slowly improving, but not fast,” said Kateryna Rybachenko, vice chair of the club. “Logistics are still very difficult, and the ports need to clean out the bins from the previous harvest.”

Most of Ukraine’s wheat consists of winter varieties, which are sown from now and then lie dormant during the coldest months, before resuming growth in spring. Farmers near the western border that’s farthest from the front lines are operating more normally, but the situation is more difficult moving east.

For example, Rybachenko said the wheat area at agribusiness Agro-Region, where she is a board member, may shrink about 10% to 15%.

The early outlook is another reminder of the challenges Ukraine’s farm sector faces, even after the recent deal to restart exports from some key ports. That’s helping sales of grain that’s typically sent to to countries across Africa, Europe and Asia.

That’s prompting some growers to switch to more lucrative crops like oilseeds. Oleksandr Peretiatko said the farm he helps manage in the Volyn region will cut winter-wheat plantings by 10% to 15% from last year, while boosting the rapeseed and sunflower area.

Plantings are also under threat in areas occupied by Russian forces. Ukraine’s wheat area has typically been centered in the south and east, where the fighting is concentrated.

Major grower HarvEast plans to sow 1,500 hectares (3,707 acres) of winter rye, wheat, and barley for next year’s harvest on the land it now controls, less than a third of the usual 5,000 hectares for the area, Chief Executive Officer Dmitry Skornyakov said.

The company — part of Ukrainian tycoon Rinat Akhmetov’s SCM holding company — has lost about two-thirds of its land to the Russian occupation, Skornyakov said.

Agribusiness Agricom Group has also lost about a third of the land it usually sows, said CEO Petro Melnyk. It will start planting winter-crops next month and wheat and rye is expected to be sown on about 15% of the available area, down from 25% to 35% normally.

Since the first grain cargo moved on Aug. 1, more than 700,000 tons of crops have been exported under the deal signed in late July and which is valid for an initial 120 days. Ukraine can normally ship out more than 5 million tons of grains a month through its ports.

Traders are also still shipping grain via rail and road, but those routes take longer and are more expensive.

The Argentine government on Wednesday extended its 12.5% biodiesel blend rate to avoid fuel import increases, having first increased it in June from 5%.

Argentina heavily relies on imports to meet its fuel demand, costing it valuable foreign currency, which is already in low supply and which the government is trying to hold on to amid sky-high inflation in the country.

“We are convinced that we must bet on biofuels, which allow us to save foreign exchange (reserves). That is why we have decided… to extend the cut,” said Energy Minister Flavia Royon on Twitter.

Royon did not say how long the 12.5% blend rate would be in effect, and the ministry did not respond to a request for comment.

Most nitrogen prices are up after aggressive summer fills, fueled by more nitrogen plant outages in Europe due to surging natural gas prices. US wholesale and retail fertilizer prices are down significantly from spring highs, however, portending relief for farmers ahead of the fall application season.

Nitrogen Up on Idled Capacity

Recent European nitrogen plant outages triggered an increase of $30 a metric ton (mt) in Brazil urea prices this week, but potash and phosphate remained weak amid oversupply. The fate of higher urea prices depends on whether buyers step up or pull back on demand.

Urea prices in Brazil moved up $30 a metric ton (mt) after falling $60 last week, fueled by nitrogen plant shutdowns in Europe amid high natural gas prices. The elevated urea prices may be difficult to sustain, however, due to slow demand in Brazil, unsold inventories in port warehouses and competition from cheaper Iranian and Latin American tons. Potash and phosphate prices in Brazil suggest another drop, as demand remains light and suppliers focus on releasing existing inventories. Potash appears to be down $20/mt from last week, and though phosphate import prices are generally unchanged, discounted inland offers will likely pressure the market. 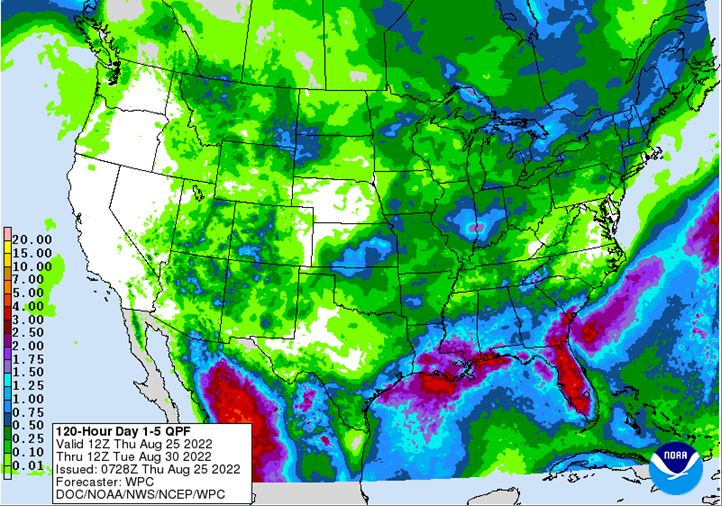 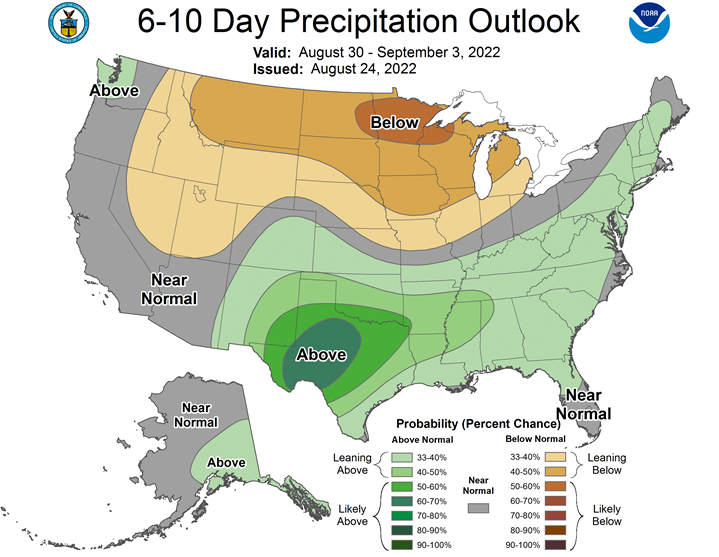 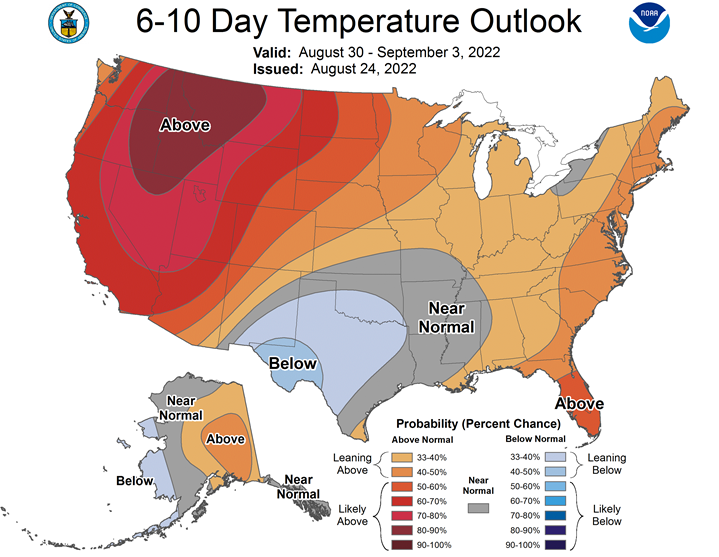 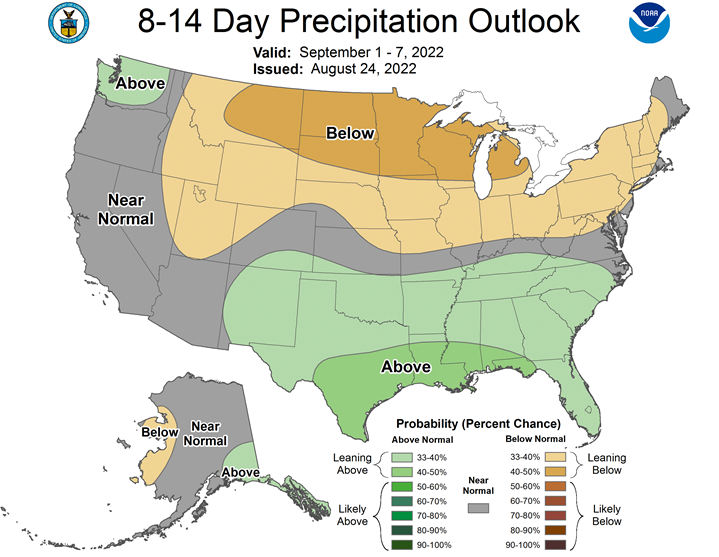 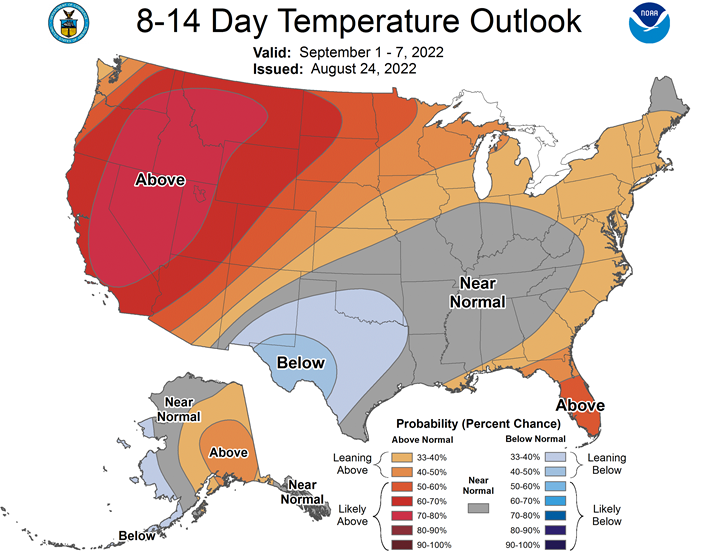