During the August 25, 2022, launch of the new Export Sales Reporting and Maintenance System, FAS encountered challenges that affected both the quality and the physical dissemination of our weekly export sales data. The agency is retracting the data published earlier today. Updated data will be made available as soon as all issues are resolved.

Blistering heat and lower-than-average rainfall hurt corn harvest prospects for crops in Iowa, according to crop scouts on the final day of the Pro Farmer crop tour.

Corn yields in Minnesota avg 190.39 bu/acre, according to 213 samples taken by participants on the Pro Farmer Crop Tour.

Corn production in 27 European member states will total 59.3 million tons in the 2022-23 season, the European Commission says in presentation slides on website. 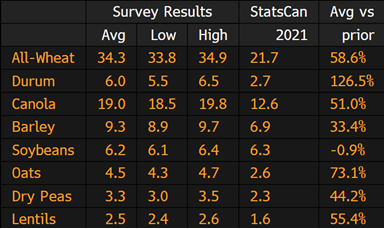 USDA Retail Food-Inflation Forecasts for 2022 and 2023 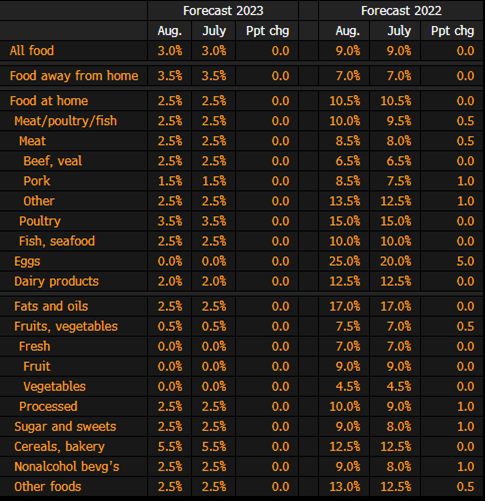 As China’s record heatwave starts to subside, farmers are assessing the damage caused by a prolonged drought and the government is urging them to replant or switch crops where they can

More than 70 days of extreme temperatures and low rainfall have wreaked havoc along the basin of the Yangtze, which supports more than 450 million people as well as a third of the country’s crops.

Though rain is expected over the coming 10 days, farmers near the depleted Poyang Lake in central China’s Jiangxi province, normally a flood outlet for the Yangtze, worry that the heat has already done too much damage.

The agriculture ministry in an emergency notice on Tuesday called on farmers to harvest and store rice and take action to strengthen grain growth in coming weeks. In areas where the drought has already inflicted heavy damage, farmers are encouraged to switch to late-autumn crops like sweet potatoes, but that is no easy task.

“We can’t switch to other crops because there’s no land,” said Hu Baolin, a 70-year old farmer in a village on the outskirts of Nanchang, Jiangxi’s provincial capital.

He said his plants, including rapeseed oil and sesame, were far less developed compared to normal years, and his pomelos were just a third of their usual size.

Nearby wells were severely depleted, and a gaggle of geese milled around a pond that had completely dried up around 10 days ago. Villagers had also been battling a brush fire nearby.

“Don’t let people see it and think I brought you here on purpose. You can go anywhere you like (in this village), it’s all the same.”

The agriculture ministry said on Tuesday that the hot weather posed a “serious threat” to autumn grain production and urged local governments to “do everything possible” to find more water.

Drones were deployed in the worst hit province of Sichuan in China’s southwest on Thursday to seed clouds and induce rain, while other regions along the Yangtze have been mobilizing firefighters to spray parched crops, state broadcaster CCTV said.

Brazil is expected to seize a record 500 tonnes of illegal pesticides in 2022, more than twice the volume in 2020, as the government steps up enforcement amid surging demand for agrochemicals.

The rise in seizures reflects greater cooperation among different government agencies, intended to prevent large criminal organizations from capitalizing on the trade, an agriculture ministry official told Reuters on Thursday.

The flourishing illegal market underscores supply chain risks for global grain traders operating in Brazil, aside from being a public health hazard.

Because Brazil is a tropical country, farmers here require more pesticides to protect crops like corn and soy than competing nations, where the climate is colder.

“Just like a company, organized crime directs its efforts to activities that generate more profits,” said Julio Lima, head of the ministry’s pesticides oversight unit, in an interview. “Gangs are leaning toward agrochemicals because demand and prices rose.”

The market is worth $14.9 billion, according to trade group Sindiveg.

Differing regulations for pesticide use are also a problem, as are Brazil’s light penalties for offenders, experts say.

Marco Palhano, border control chief at the federal highway police, told Reuters that the herbicide paraquat, banned in 2020, has been the most commonly seized substance this year.

“Farmers ignore the ban and keep on buying it,” he said.

According to Drugwatcher, the highly toxic paraquat is sprayed on over 50 crops in around 120 countries, including in the United States. But while some 32 nations have banned or restricted use of the substance, exports continue to flow.

Palhano noted paraquat is imported legally by Paraguay and Uruguay from China. Criminals later smuggle it into Brazil.

US Crops in Drought Area for Week Ending Aug. 23: USDA

The following table shows the percent of US agricultural production within an area that experienced drought for the week ending Aug. 23, according to the USDA’s weekly drought report. 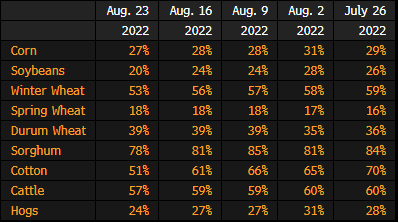 Shipments along the Mississippi, Illinois, Ohio and Arkansas rivers declined in the week ending Aug. 20 from the previous week, according to the USDA’s weekly grain transportation report. 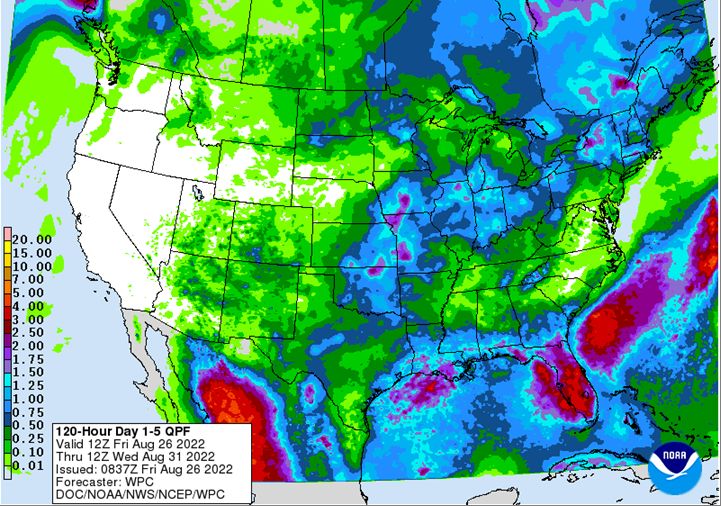 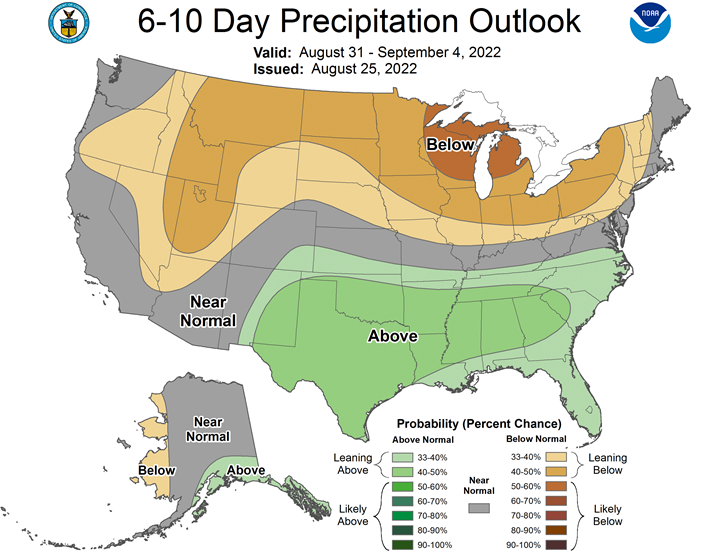 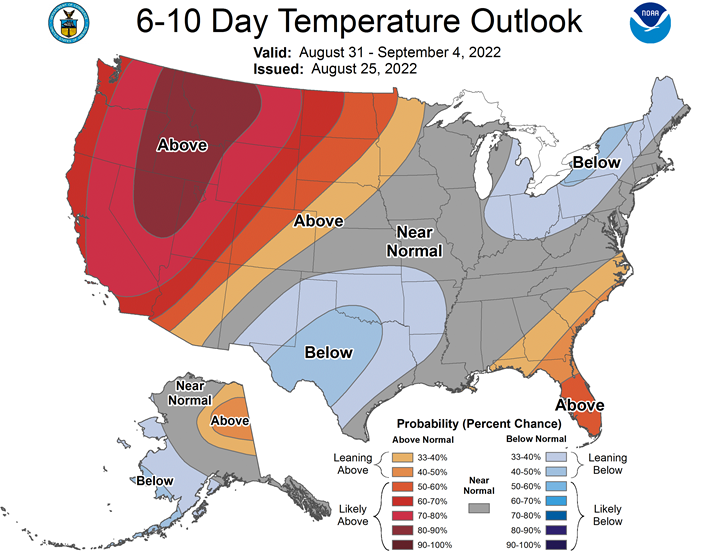 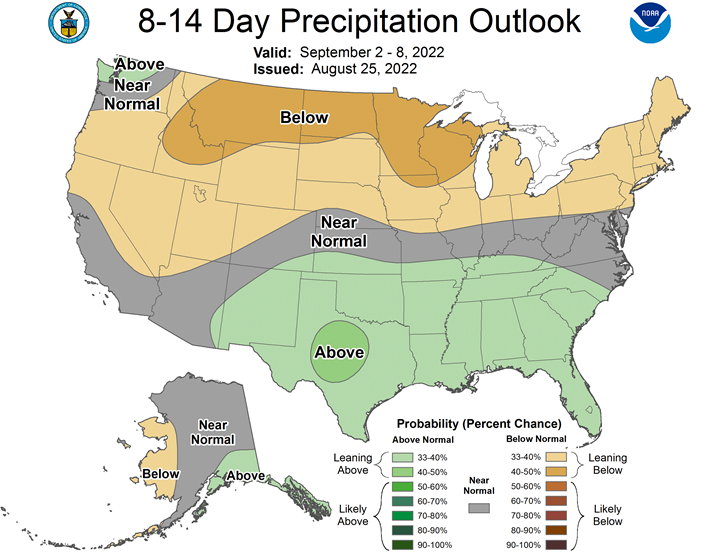 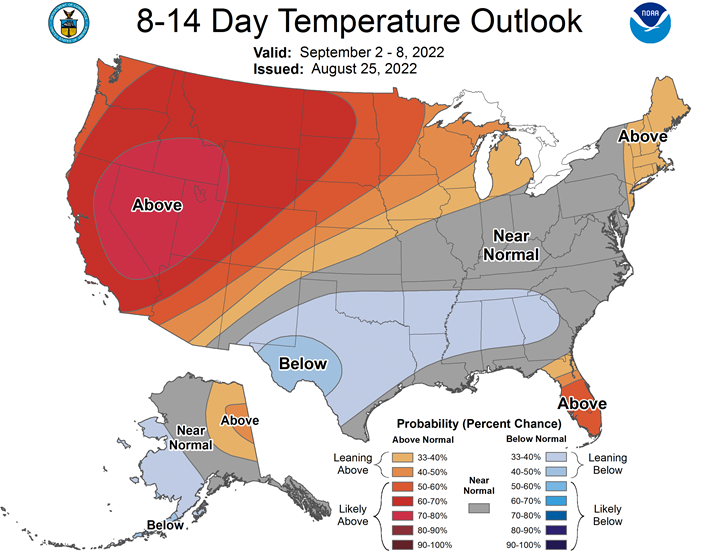