Output and stockpile projections for the week ending Aug. 26 are based on six analyst estimates compiled by Bloomberg.

Agritel forecasts a “catastrophic” corn harvest in France this year at 10.8m tons, the lowest in more than 20 years, as drought affects crops across the continent, according to a statement.

Stocks of hard spring wheat stored in Minnesota and Wisconsin warehouses fell to 14.798m bushels in the week ending Aug. 28, according to the Minneapolis Grain Exchange’s weekly report.

The U.S. soybean crush likely rose to 5.416 million short tons in July, or 180.5 million bushels, according to the average forecast of eight analysts surveyed by Reuters ahead of a monthly U.S. Department of Agriculture (USDA) report.

The USDA is scheduled to release its monthly fats and oils report at 2 p.m. CDT (1900 GMT) on Thursday.

National Oilseed Processors Association (NOPA) members, which account for about 95% of soybeans processed in the United States, crushed 170.220 million bushels of soybeans last month, up 3.4% from June and up 9.7% from July 2021. Soyoil supplies held by NOPA members as of July 31 fell to 1.684 billion lbs, the smallest end-of-month stocks since August.

Argentine grains producers have sold 51.6% of 21/22 soybeans so far -government

Argentina’s grain producers have sold 51.6% of the 2021/22 soybean harvest so far, the country’s Ministry of Agriculture said on Tuesday, lagging behind the 62% sales rate reported at the same point in the previous season.

Argentina soybean production in the 2021/22 cycle was 44 million tonnes, down from 46 million tonnes the previous cycle, according to government data, with the country serving as the world’s leading exporter of meal derived from the oilseed.

Sales have slowed as Argentina faces an inflation crisis, prompting farmers to push for a devaluation of the pesos to improve the dollar value of their grains.

Meanwhile, producers have already sold 64% of the corn for 2021/22 cycle, on par with the figures reported last August.

The 2021/22 corn harvest totaled 59 million tonnes, down from 60.5 million in the previous cycle, according to government data, whose calculations include the grains used as field fodder.

With the harvesting of Argentine soybeans and corn for the season now complete, sowing for the 2022/23 cycle will begin between September and October.

Separately, Argentina’s 2022/2023 wheat harvest will begin in November, with the latest official data showing the fields to be mostly in a positive condition after rains. [nL6N3010EU]

The government has not yet estimated the harvest for the new cereal campaign, although the Rosario grains exchange estimated wheat production for 22/23 at 17.7 million tonnes.

Following is a summary of Malaysia’s Aug. palm oil exports according to Intertek Testing Services.

Three vessels carrying a total of 107k metric tons of grain and food products are authorized to leave Ukraine on Wednesday, the Joint Coordination Centre says in an emailed statement.

Harvest is 3% complete, well behind the five-year average of 39%, the province’s agriculture ministry says Tuesday in a report.

US farmers are expecting to plant a total of 94.3m acres of corn next year, a 5% increase from USDA estimates for 2022 if realized, a Farm Futures survey found.

USDA Sees Agriculture Exports Down in 2023 on Lower Cotton, Beef

The USDA projects fiscal year 2023 exports to fall by $2.5b to $193.5b, according to the Outlook for U.S. Agricultural Trade report released on Tuesday. 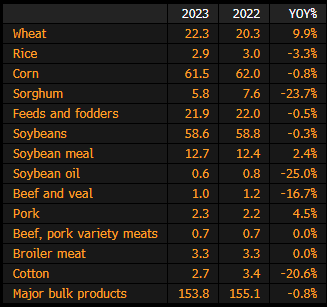 Corteva and BASF announced a “strategic cross-licensing agreement” on herbicide-tolerant soybeans and corresponding herbicides for farmers in North America and elsewhere, according to a release Tuesday at the Farm Progress Show in Iowa.

The La Nina weather pattern will last until at least the end of the year, becoming the first time this century it will have spanned three consecutive northern winters, the World Meteorological Organization predicted on Wednesday.

La Nina conditions in the tropical Pacific strengthened as trade winds intensified in mid-July to mid-August, affecting temperatures and precipitation patterns and exacerbating drought and flooding in different parts of the world.

The WMO’s El Nino/La Nina Update foresaw the current La Nina – which started in September 2020 – continuing over the next six months, with a 70% chance in September-November 2022 and decreasing to 55% in December-February 2022-2023.

La Nina refers to the cooling of ocean surface temperatures coupled with winds and rainfall. It usually has the opposite impact on weather and climate as El Nino, which is the warm phase of the so-called El Nino Southern Oscillation (ENSO).

“It is exceptional to have three consecutive years with a La Nina event. Its cooling influence is temporarily slowing the rise in global temperatures – but it will not halt or reverse the long-term warming trend,” WMO Secretary-General Petteri Taalas said in a statement.

He said the worsening drought in the Horn of Africa and southern South America bore the hallmarks of La Nina, as did above-average rainfall in southeast Asia and Australasia.

“The new La Nina Update unfortunately confirms regional climate projections that the devastating drought in the Horn of Africa will worsen and affect millions of people,” he added. 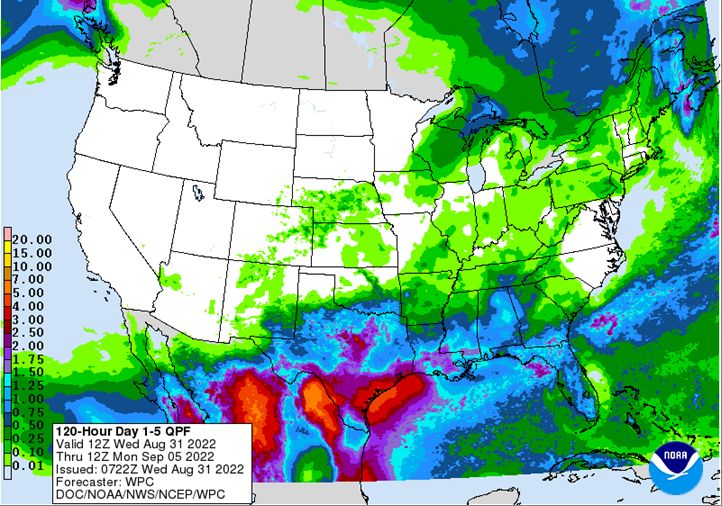 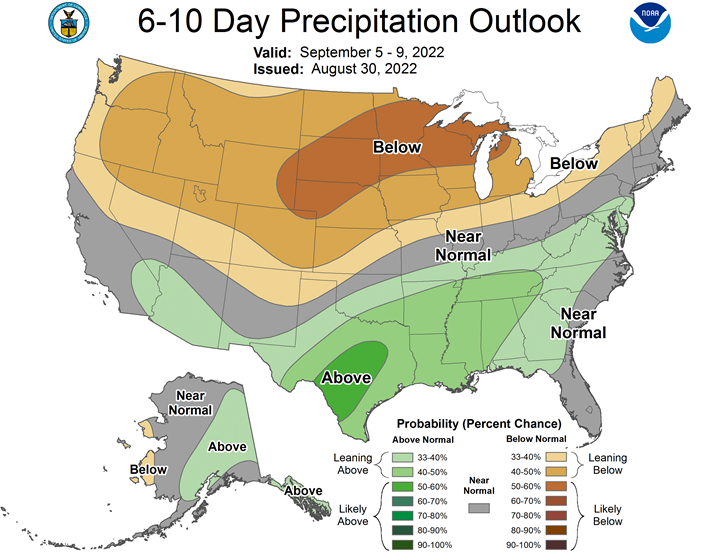 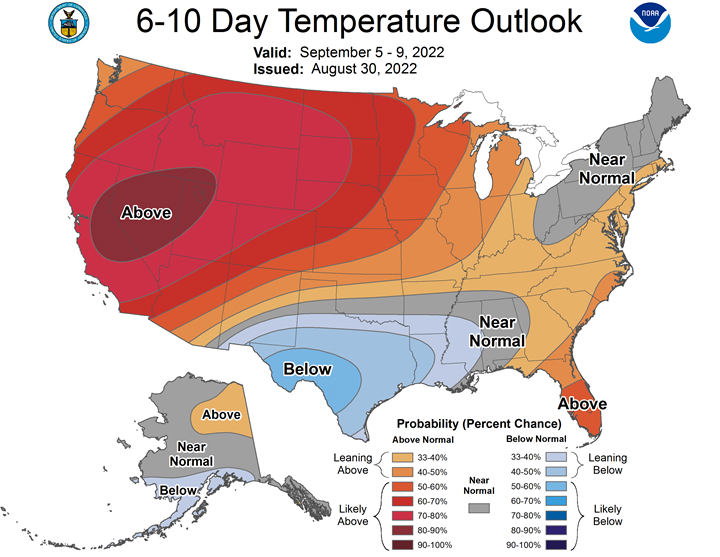 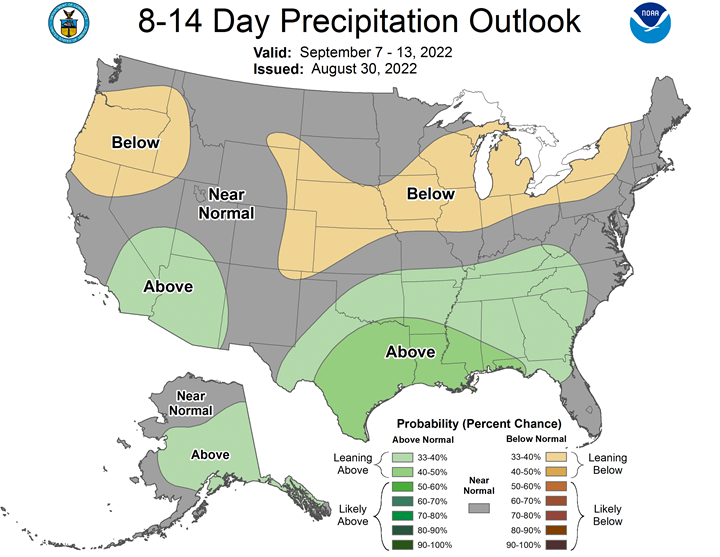 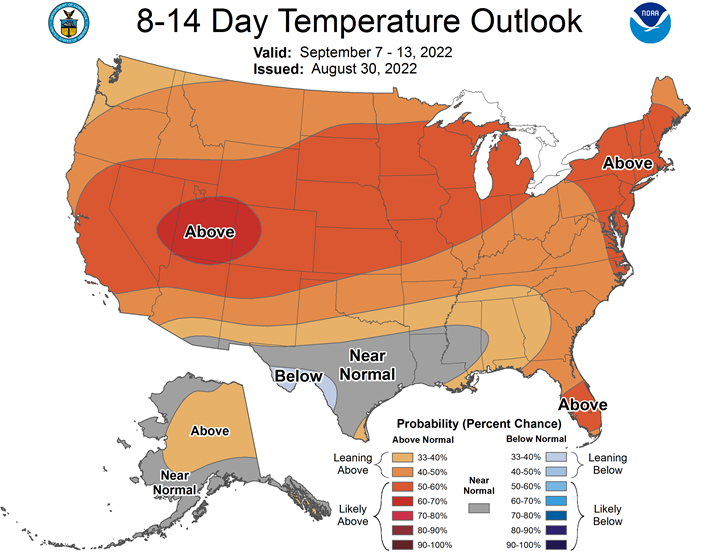