Central/Southern Plains Forecast: Mostly dry through Thursday. Scattered showers Friday-Saturday. Temperatures near to above normal through Friday, near to below normal Saturday. Outlook: Isolated showers south Sunday. Mostly dry Monday-Wednesday. Isolated showers Thursday. Temperatures near to below normal Sunday-Monday, near to above normal Tuesday-Thursday.

Western Midwest Forecast: Mostly dry through Thursday. Scattered showers Friday-Saturday. Temperatures above normal through Friday, near to above normal Saturday.

US Crop Progress and Conditions for Sept. 4: Summary 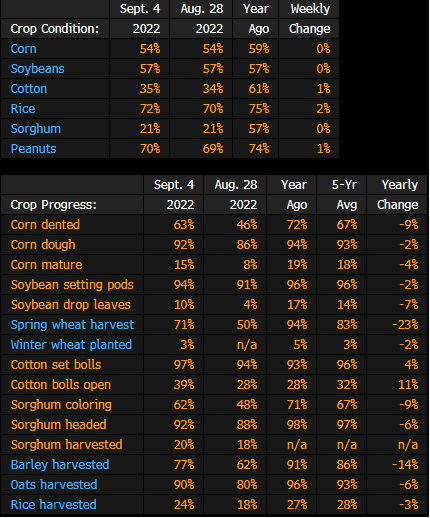 US Inspected 518k Tons of Corn for Export, 496k of Soybean

In week ending Sept. 1, according to the USDA’s weekly inspections report. 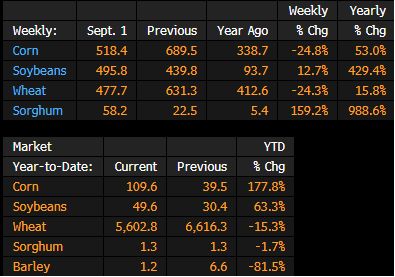 China, the world’s top buyer of soybeans, brought in 7.17 million tonnes in August, versus 9.49 million a year earlier, data from the General Administration of Customs showed.

The figure was the lowest for the month of August since 2014. It was also lower than July’s 7.88 million tonnes.

The low import number for August was expected, said traders and analysts.

“Imports have been very sluggish for the past three months,” said Darin Friedrichs, co-founder of Shanghai-based consultancy Sitonia Consulting.

That halted purchases by China, where heavy losses for pig farmers have also dented demand for soymeal. Soybeans are crushed to make soymeal, a key pig feed ingredient, and soyoil for cooking.

Industrial animal feed production fell almost 7% in July versus a year ago, according to the China Feed Industry Association.

Crush margins in China have been negative since mid-April, with crushers in the key processing hub of Rizhao losing 519 yuan ($74.80) for each tonne of soybean processed as of Sept. 5.

“June was much higher than expected so July and August should be lower,” said a Beijing-based soybean trader.

Hog farming profits have significantly improved in recent months after a reduction in the pig breeding herd, which should help demand for soymeal later in the year, said Friedrichs.

From January to August, China brought in 61.33 million tonnes of the oilseed, down 8.6% from the same period a year ago, the customs data showed.

Private analytics firm IHS Markit Agribusiness on Tuesday lowered its estimate of the U.S. 2022 corn yield compared to its Aug. 5 forecast, according to traders and portions of an IHS client note seen by Reuters.

For soybeans, IHS Markit forecast the average U.S. yield at 51.3 bpa, down from 51.8 bpa last month.

Before the invasion, which Russia calls a “special military operation”, Ukraine was the world’s largest sunflower seed grower and sunflower oil exporter.

Russian President Vladimir Putin said the grain-shipment corridor from Ukraine that was agreed in July is not helping poorer countries as the majority of supplies are going to Europe.

Argentina’s daily soy trading volume has hit its highest level in five and a half years, the country’s Rosario grains exchange said on Tuesday, after the government introduced a preferential “soy dollar” foreign exchange rate to boost exports.

The Rosario grains exchange said in a report that Argentine soy operations registered on Monday, the first day the FX rule came into effect, had been close to 800,000 tonnes, which it said was the highest trading volume since early 2017.

On Sunday, Argentina’s Economy Minister Sergio Massa announced new temporary incentives for soybean farmers to sell more of their stock by accessing a better exchange rate, in a bid to boost exports and hard currency reserves.

Argentina is the world’s top soy oil and meal exporter, as well as the No. 3 for soybeans. But farmers have been holding onto soybean stocks longer than last year as a hedge against potential devaluation of the embattled local peso currency.

Amid a deep economic slump marked by soaring inflation, President Alberto Fernandez’s government is seeking to boost U.S. dollar reserves to meet the terms of a $44 billion debt deal with the International Monetary Fund.

“There is an unusual sale of soybeans and this is in line with what was announced by the government,” said Armando Torre, a local foreign exchange analyst.

“Everything suggests that an avalanche of dollars is coming, useful for the central bank’s reserves, even though none of the bigger underlying issues of the economy have been solved.”

Argentina’s soy sales tick up in last week of August

Argentine soybean farmers registered 268,000 tonnes of sales during the last week of August, according to agriculture ministry data released on Tuesday, as the country expects the pace of sales to increase as new incentives kick in.

Soy sales during the current harvesting season, however, significantly lag the percentage of the crop sold at this point during the previous 2020/2021 cycle, when nearly 63% had been purchased.

Argentina is the world’s biggest soy oil and meal exporter, as well as the No. 3 soybeans supplier, with exports playing a vital role as a top generator of foreign reserves for central bank coffers.

On Sunday, Economy Minister Sergio Massa announced new incentives for soybean farmers to sell more of their stock by being able to access a more favorable exchange rate this month. The 200 peso per U.S. dollar rate available to soy farmers and exporters formally launched on Monday and will extend through Sept. 30. (Full Story)

The agriculture ministry also reported that about 65% of the country’s 59-million-tonne corn harvest during 2021/2022 has been sold, slightly above year-ago sales figures. 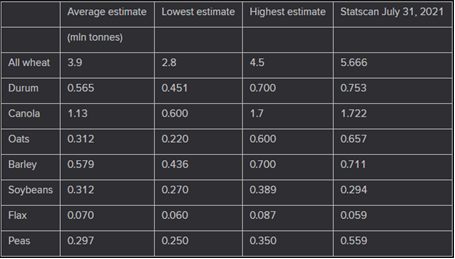 Demetra Trading and OZK JSC, which is also known as United Grain Co., were among the five largest shippers by this time last year. But they’ve slid out of the top 10 in the first two months of this season, Bloomberg calculations based on ship data from Logistic OS show.

It’s another sign of how self-sanctioning is affecting Russia’s commodities industry. While sanctions over its invasion of Ukraine haven’t targeted trade in food and fertilizers, there have been logistical and financial constraints. Some buyers, insurers and shippers are wary of falling foul of any penalties by doing business with Russian firms — particularly those linked to sanctioned entities.

That could benefit international merchants, who in recent years have seen more competition from Russian firms as Moscow seeks to expand its influence in the food sector. Since the season began in July, Louis Dreyfus has jumped to fourth place from ninth in exports.

OZK was the fifth-biggest shipper of Russian grain in the July-August period last year, and is now ranked 13th. Demetra, which is part-owned by state-controlled VTB Group, has fallen from fourth to 11th. VTB is among Russian entities that have been sanctioned.

OZK — which is owned by the state and Demetra — told the Kommersant newspaper that some shippers have been unwilling to charter Russian cargoes or call at ports to avoid secondary sanctions. High freight costs and payment difficulties have also been an issue, it said.

“Some people prefer not to deal with companies which have shareholders on sanctions lists like VTB,” Andrey Sizov, head of consultant SovEcon, said in an interview.

Russia is the world’s biggest wheat exporter and its farm sector is crucial for keeping the world fed. The war has kept grain prices historically high, setting Russia up to reap windfall revenues from a bumper harvest. And because agriculture hasn’t been targeted by sanctions, major international merchants have been able to keep exporting large amounts of Russian crops.

Still, Russian grain exports this season fell 22% from a year ago by the end of August. As well as bankers, shippers and insurers being cautious about doing business in Russia, local farmers have been reluctant to sell wheat due to a strong ruble and high export tax.

Sizov expects Russia’s export pace to pick up again soon as lower prices makes its wheat more competitive against supplies from other key shippers in Europe.

Another Russian company, with links to Demetra, has emerged to become the country’s eighth-biggest grain exporter. Grain Gates LLC is run by Demetra’s former head of trading, Ilya Aliev, and was registered in June, according to the Spark-Interfax database. Grain Gates is one of Demetra’s partners for developing grain exports, Interfax reported in August, citing a Demetra spokesperson.

Vladimir Putin said he would discuss lifting export quotas on corn and soybeans with the Ministry of Agriculture, Tass reported, citing comments by the Russian president at a meeting.

EU soft-wheat exports during the season that began July 1 reached 6.21m tons as of Sept. 3, compared with 6.02m tons in a similar period a year earlier, the European Commission said on its website.

The Purdue University/CME Group’s agricultural sentiment index increased to 117 points in Aug. from 103 in July, according to a survey of 400 agricultural producers. 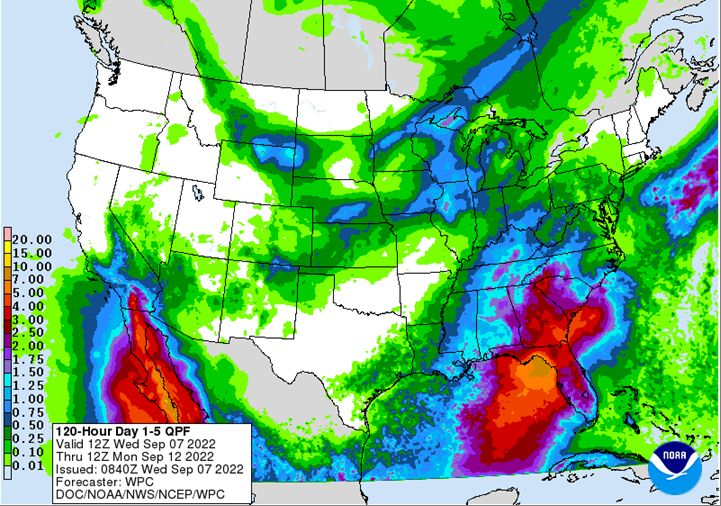 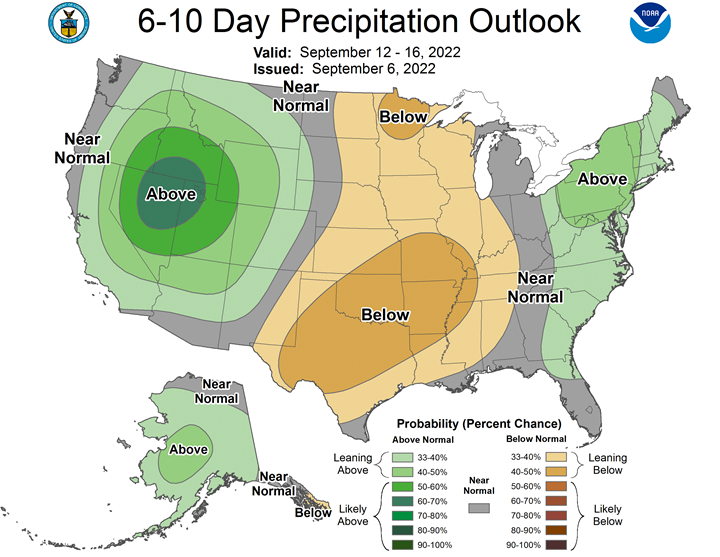 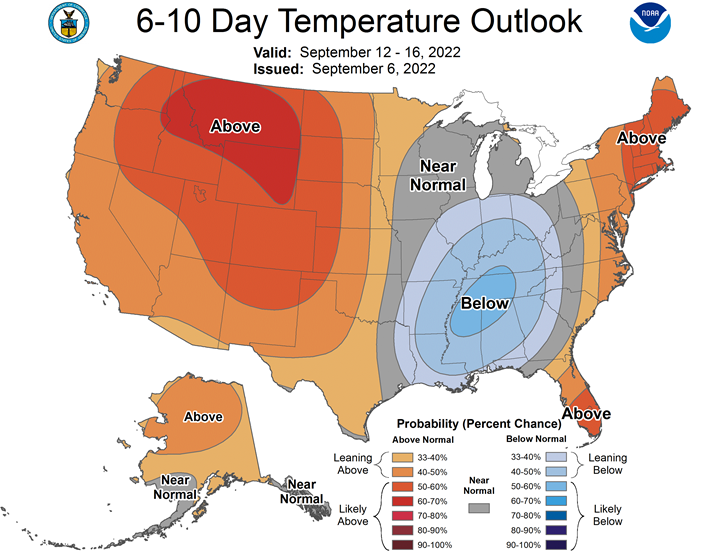 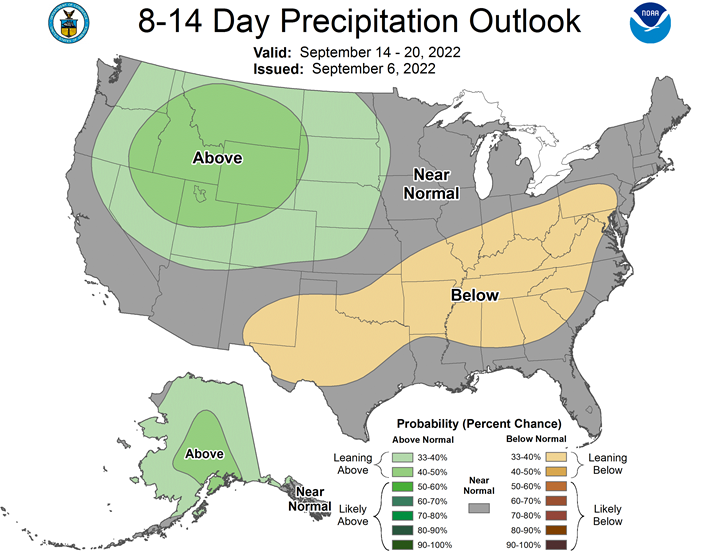 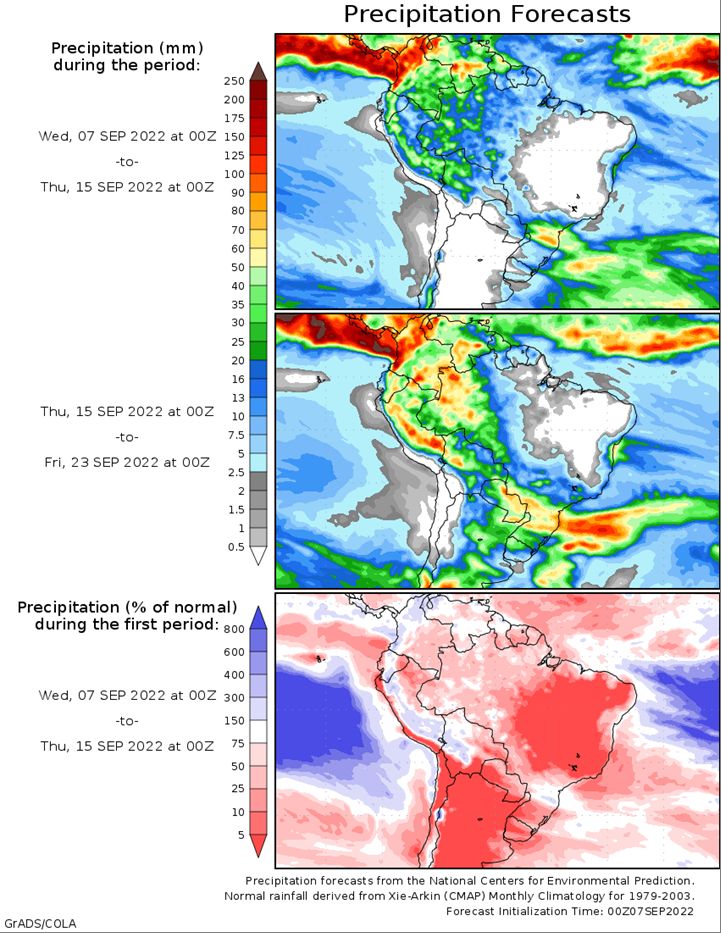