US Exports of Corn, Soybean, Wheat, Cotton in July 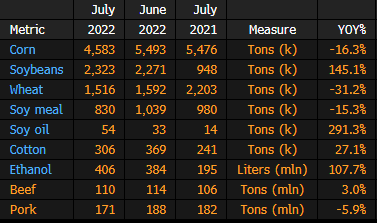 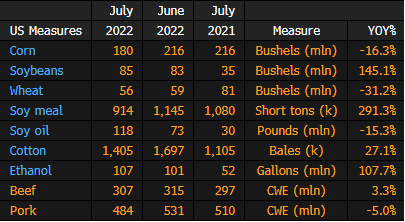 World 2022-23 production seen half a million bales lower than USDA’s previous estimate, according to the avg in a Bloomberg survey of eight analysts.

Output and stockpile projections for the week ending Sept. 2 are based on six analyst estimates compiled by Bloomberg. 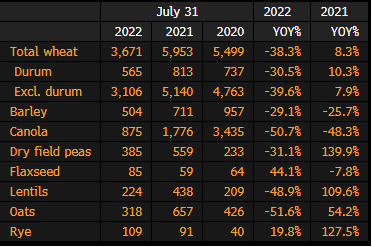 High fertilizer prices are predicted to rein in global grain production by 40% in the next planting season, Maximo Torero, chief economist of the UN’s Food and Agriculture Organization, said in an interview on Bloomberg TV.

Argentina’s Ciara-Cec, the country’s crushing and export chamber, said on Twitter that 72 hours after the start of the decree setting a temporary exchange rate of 200 pesos per US dollar, foreign exchange income totaled $1,075 million, exceeding the goal set last Sunday

Argentina’s central bank on Wednesday bought $464m from soy exporters at the special, temporary exchange rate of 200 pesos a US dollar, according to data provided by Gustavo Quintana, a currency trader at PR Corredores de Cambio in Buenos Aires.

Farmers made new sales to exporters and crushers for ~1.3m metric tons of soybeans on Monday and Tuesday, and completed transactions on old delayed-price contracts for another ~800,000 tons, according to the Rosario Board of Trade.

An estimated 300,000 to 400,000 acres of soybeans were damaged by extensive rains late last month in Louisiana, David Mosely, assistant professor and soybean specialist at the Louisiana State University AgCenter, says Wednesday by phone.

Malaysian palm oil production is set to decline for a third year as a worker shortage in plantations continues to hamper harvesting, according to the nation’s largest group of growers.

Total crude palm oil output for 2022 from the world’s second-largest grower will be 18 million tons, said Joseph Tek, the new chief executive of the Malaysian Palm Oil Association, which represents 40% of planted palm by area in the country.

Malaysia’s palm oil industry is reliant on overseas workers and authorities are struggling to bring in people fast enough since pandemic restrictions eased. Without enough boots on the ground, many planters are having to cut harvesting and leave ripened fruit rotting on trees.

Under its previous leadership, the association had forecast production of 18.5 million to 18.7 million tons for 2022. Output was 18.1 million tons last year, and 19.1 million in 2020. There are crop losses ranging from 15% to 25% or even higher due to the labor crunch, according to Tek.

“The above scenario is set against the backdrop of the snail pace return of foreign workers,” he said. It’s now the peak cropping time of the year with “the ugly monsoon season just around the corner,” said Tek, who became chief executive in mid-August.

The ubiquitous tropical oil has seen wild swings this year. Futures surged to a record in late April on global vegetable oil supply shortages following Russia’s invasion of Ukraine, but have since plummeted as Indonesia, the biggest grower, ramped up exports and on expectations for increased production from Malaysia.

The labor shortage has worsened to around 120,000 workers, Tek said. Although some applications for foreign worker quotas have been approved by the government, there are still administrative and procedural glitches, which means any incoming workers may miss the peak production season, he said. August through October is generally the busiest harvest period.

Following are selected highlights from a report issued by the U.S. Department of Agriculture’s Foreign Agricultural Service (FAS) post in Beijing:

“China’s biofuels policies continue to wane as a priority for the People’s Republic of China (PRC) and investment in the sector has declined. Post estimates China’s 2022 ethanol blend rate at 1.8%, down from 2021 and well below the peak blend rate of 2.8% eleven years ago. Fuel ethanol consumption in 2022 is estimated at 3.8 billion liters, down 164 million liters from 2021 due to regional Covid-19 lockdowns resulting in less gasoline consumption in existing E10 pilot areas.”

“Ethanol production in 2022 is forecast to increase to 3.8 billion liters, up 383 million liters from the previous year due to a period of profitability early in the year and limited imports. China’s 2022 biodiesel production is forecast at 2.4 billion liters, up by more than 32% from 2021 due to a surge in export demand, well above previous records almost entirely to the EU. Domestic biodiesel blending rates remain limited with no mandates beyond one municipal B5 program.”

The island of Rouzic’s windswept clifftops should be teeming with gannets, but an unseasonal wave of bird flu on the French Atlantic coast this summer has devastated their numbers, alarming conservationists and poultry farmers.

Thousands of seabirds have perished along France’s western shores in past weeks because of the viral infection, which usually strikes during autumn and winter months, raising fears it may have become a year-round risk and endemic to French wildlife.

That poses a danger for France’s poultry industry, the European Union’s second largest, which was forced to cull more than 19 million birds between November and May because of avian influenza, as bird flu is formally called.

“Bird flu is hitting seabirds in the spring and in the summer, which is totally new. Traditionally bird flu mainly hits waterfowls during winter,” Pascal Provost, director of the Sept-Iles archipelago bird reserve which includes the Rouzic island.

After a brief lull in farm outbreaks in May, the French government eased poultry farming curbs in June. (Full Story)

However, soon after the virus hit flocks along the Brittany coast, slowly spreading south.

Rouzic is home to one of the world’s rare colonies of northern gannets. Provosts said bird flu ravaged the flock from early July, killing adults and leaving their chicks to starve.

Since late July, seven new bird flu outbreaks have been confirmed on French farms, according to the agriculture ministry.

“The situation is exceptional – never encountered in France before – due to its scale and the period when cases are being detected,” the ministry said on its website, warning about the risk of contamination to poultry farms.

French poultry farmers are still recovering from previous outbreaks and the mass culling that followed, and before the latest outbreaks already faced a near 10% fall in output this year, industry group Anvol said.

“Before, bird flu outbreaks were caused by migrating birds, but now we see that there are more and more cases in French wildlife. This is new and it worries farmers and the whole poultry industry”, Anvol chairman Jean-Michel Schaeffer told Reuters.

Following are selected highlights from a report issued by the U.S. Department of Agriculture’s (USDA) Foreign Agricultural Service (FAS) post in Beijing:

“In 2023, imports of breeding swine and pork are expected to decline to 5,000 head and 1.85 million metric tons (MMT), respectively, due to lower domestic hog and pork prices. Consumer price sensitivity and competition among producers are expected to constrain pork and hog price increases, squeezing margins. Strong carryover stocks of beef cattle from 2022 into 2023 will support an increase in cattle and beef production to 52.575 million head and 7.4 MMT, respectively. Imports of cattle and beef are forecast to decline to 300 thousand head and 2.5 MMT, respectively, in 2023 on a less optimistic economic outlook, COVID-19 restrictions and uncertainty in the HRI sector, and tight global supplies.”

Viterra’s net income was reduced by $48 million due to Russia’s invasion of Ukraine, with some of that due to damage to assets, it said in a half-year report.

Fertilizer Prices Move Up Ahead of Fall Application Season

US nitrogen prices have risen dramatically after aggressive summer fill programs, fueled by a rash of nitrogen-plant outages in Europe due to surging natural gas costs. Smaller increases were seen for phosphates after several weeks of steady prices, while the potash market remained pressured at New Orleans and inland

Prices were robust for most nitrogen products, with ammonia, urea ammonium nitrate (UAN) and ammonium sulfate all reported to be firm-to-up. International urea prices including Brazil’s were up, with India expected to announce the results of a 1-million-metric-ton tender Sept. 9. New Orleans (NOLA) and inland US urea prices lost steam after a week-ago run-up, while phosphates in those markets were showing strength for a second week in a row. NOLA, Cornbelt and Brazil potash continued to be pressured. 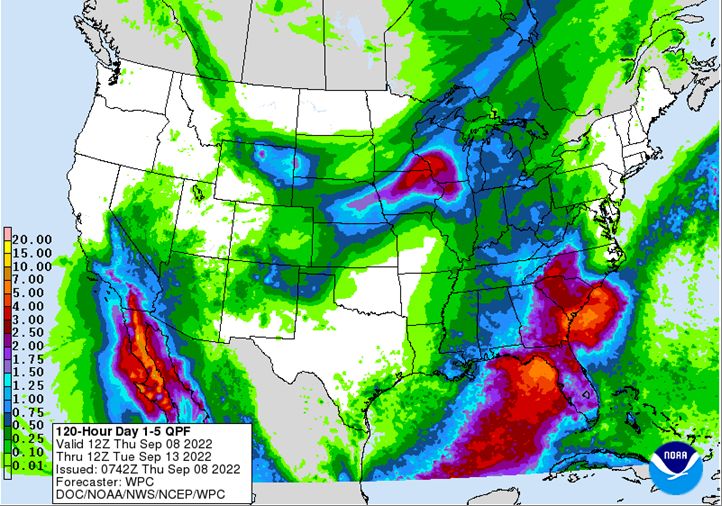 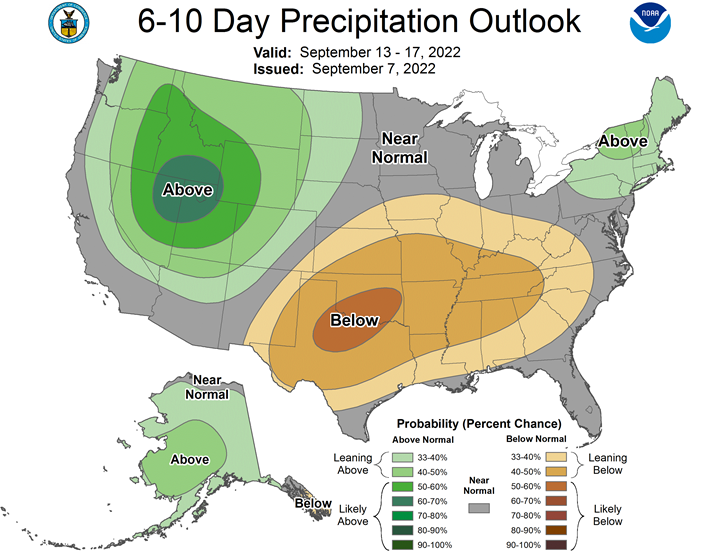 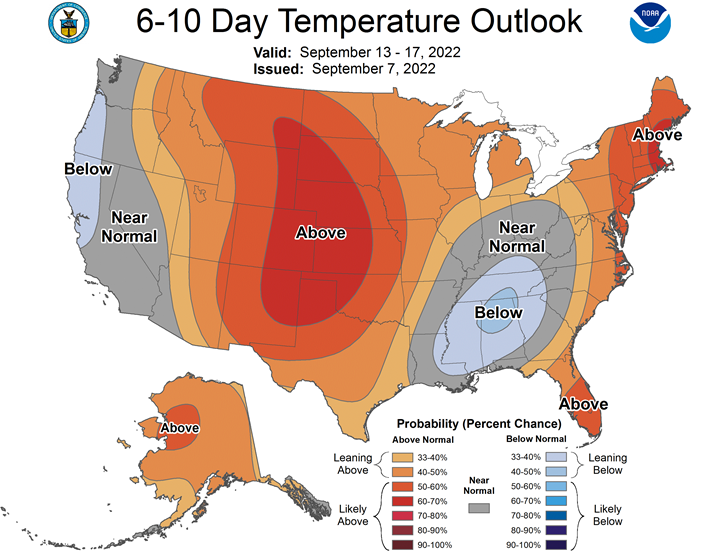 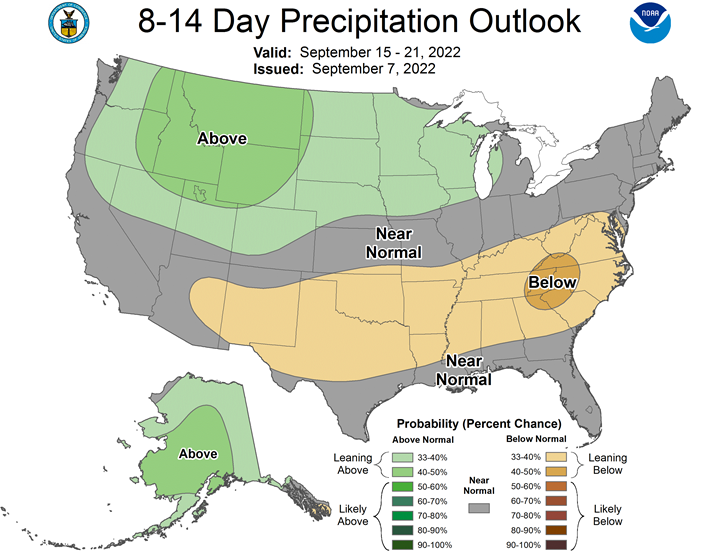 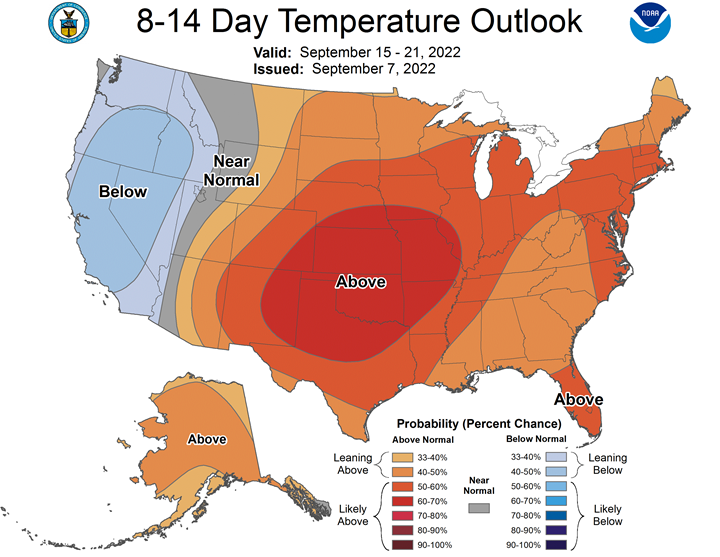 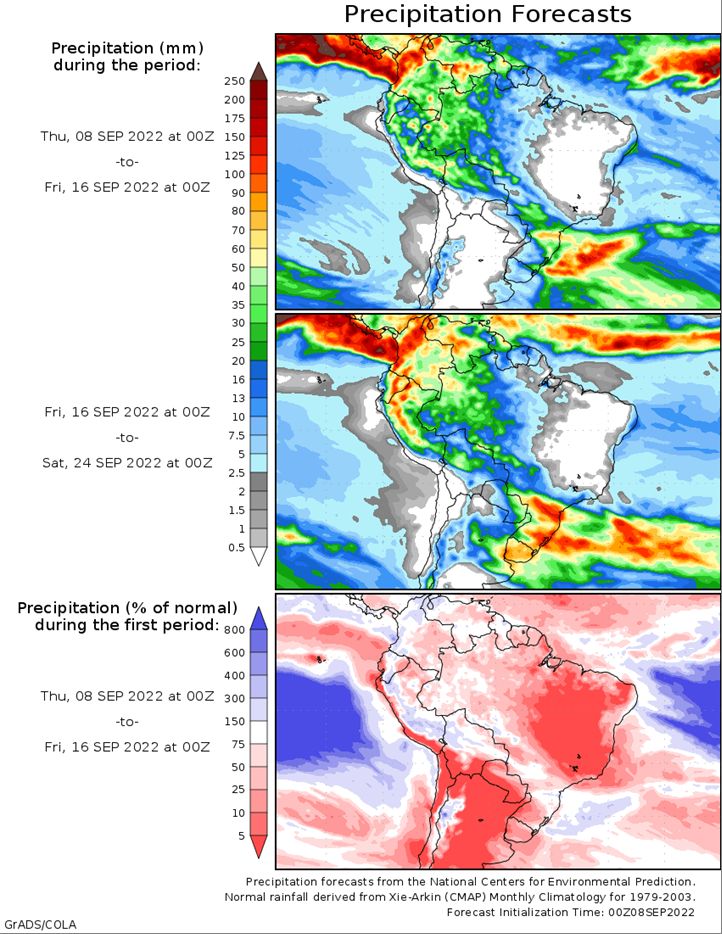