Output and stockpile projections for the week ending Sept. 9 are based on six analyst estimates compiled by Bloomberg.

Rail Strike Threat Is Set to Halt Shipments of US Crops, Autos

US railroads are poised to stop shipments of farm products and other key goods starting Thursday as the industry braces for a possible labor strike that could cost the world’s biggest economy more than $2 billion a day.

Norfolk Southern Corp. said it plans to halt unit train shipments of bulk commodities on Thursday ahead of a potential US rail worker strike the following day. The railroad also said it would stop accepting autos for transit at its facilities starting Wednesday afternoon. Other railways are likely to follow suit, according to one agriculture group.

“We are hearing several rail carriers are tentatively planning to wind down shipments,” said Max Fisher, chief economist at the National Grain and Feed Association, which represents most US grain handlers.

A halt to shipments of grains, fertilizer, fuel and other crucial items threatens to hobble the US economy at a time of rampant inflation and fear of a prolonged global economic slump. Food-supply chains are especially at risk as farmers are gearing up for harvest and need to get their supplies to customers. Crops are especially in high demand due to shortages from the war in Ukraine and weather woes across the globe.

Norfolk Southern intends to cease taking vehicle deliveries for transit as of 5 p.m. local time Wednesday and close its intermodal gates as well at that time, the Virginia-based railway said in a notice.

Representatives for BNSF Railway Co. and Union Pacific Corp. also signaled they were prepared to curtail service as the deadline looms. “We must take actions to prepare for the eventuality of a labor strike if the remaining unions cannot come to an agreement,” BNSF said in a statement.

The halting of cargoes by some railways is aimed at ensuring crews aren’t stranded if a work stoppage occurs Friday morning, Fisher said. Reuters earlier reported on the plan.

With November midterm elections less than two months away, Democratic President Joe Biden is personally trying to break the logjam between industry and labor unions. The White House has started crafting contingency plans to ensure critical materials can reach consumers in the event of a work stoppage, a sign negotiations still have a long way to go.

US Labor Secretary Marty Walsh plans to meet with railroad and union representatives in Washington on Wednesday morning, a spokesperson for the department said.

Railways are no longer shipping ammonia, an important component of about three quarters of all fertilizer, because it would be dangerous if the hazardous material was stranded during a potential rail strike, according to the Association of American Railroads. Ammonia is used in explosives as well as being an essential nutrient for plants.

A halt to rail shipments of ethanol threatens to reverse the recent slide in US gasoline pump prices from a record high. Almost three-quarters of the nation’s supply is moved on trains, mostly from Midwest plants — where corn is made into the fuel additive — to the East and West Coasts for blending into gasoline.

The petrochemical industry may be forced to slow down production at plants that churn out plastics and other products needed in industries across the US if shipments of key hazardous chemicals necessary are delayed for an extended time.

“Once available storage is full the plants would have to cut rates,” Robert Stier, senior petrochemicals analyst at S&P Global Commodity Insights, said in an email. “These hazardous materials are the first products impacted. These are difficult to ship by any other means than specialized rail cars.”

Argentine soybean farmers have sold around 57% of the 2021/22 crop, the agriculture ministry said on Tuesday citing data through last week, reflecting a boost after the government offered them a preferential foreign exchange rate.

Argentina last week bumped up the exchange rate in an effort to speed up stalled sales and replenish dwindling foreign currency reserves, after many soybean farmers held off selling their product due to growing speculation of a devaluation of the country’s peso currency.

The South American agricultural powerhouse is the world’s largest exporter of soybean oil and meal, a major corn and wheat supplier, and a key source of hard currency for the government.

The Sept. 5-7 boost in soybean sales came immediately after the government bumped up the value of the country’s cash crop by allowing sales to tap a 200 pesos per U.S. dollar exchange rate, compared to the tightly controlled official rate of about 140 per greenback.

During the first week of September, farmers sold 2.1 million tonnes of soybeans compared with just 268,100 tonnes the previous week, according to agricultural ministry data.

At the same time last year, close to 64% of that season’s slightly larger soybean harvest had been sold.

Planting season kicks off this month after an unseasonably dry winter, pushing many farmers to plant soybeans over corn.

Some 30% of Argentina’s estimated 5.2 million tonnes of wheat from the upcoming 2022/23 season had also been sold, according to the Rosario Grains Exchange.

The exchange said wheat exports for the season are seen at around 12 million tonnes, down from 15 million tonnes during the previous season.

Brazil’s total oilseed processing capacity grew 4.1% in 2020-2022 from the previous two-year period, the fastest pace of increase since 2016, according to a survey released on Tuesday by oilseeds crushers group Abiove.

Brazil’s total oilseeds crushing capacity is now at 66.7 million tonnes a year, according to the biannual survey.

The growth in capacity exceeded the average biannual rate of increase of 2.5% recorded in the last decade, according to Abiove, which represents soy crushers including U.S.-based Cargill and China’s Cofco.

Soy processors increased installed capacity as they had expected the mandatory blend of biodiesel in diesel would be increased to 14% in 2022, and prepared for it.

The government, however, maintained the mandatory mix at 10% for this year. Still, strong demand for soymeal and soy oil, mainly from exports, justified the increase in capacity, Abiove said.

Despite the frustration with the lower biodiesel mandate, Abiove said that it expects companies to invest 1 billion reais ($196.3 million) in the expansion and construction of new processing plants next year.

Stocks of hard spring wheat stored in Minnesota and Wisconsin warehouses fell to 17.201m bushels in the week ending Sept. 11, according to the Minneapolis Grain Exchange’s weekly report.

French soft-wheat exports outside the EU are now seen at 10m tons in the 2022-23 season, crops office FranceAgriMer says in a report Wednesday.

The value of Colombia’s palm oil exports may rise significantly to $800 million this year, thanks to high international prices and stable production, the palm growers association said on Tuesday.

The figure would be well above the $500 million value of foreign palm oil sales last year, said Nicolas Perez, the president of the Fedepalma association.

“By July we’d surpassed the exports for all of 2021, with $650 million, and at the close of the year they could be some $800 million,” Perez told Reuters. “The palm business last year and the first half of this year has been really good, after two very tough years.”

Several international factors account for high prices, including harvesting issues in Malaysia, the war in Ukraine – which hit production of sunflower oil – and droughts in the United States, Argentina and Brazil which lowered soy oil production.

Colombian palm oil output could be slightly above the 2021 record of 1.75 million tonnes, Perez said.

“We could have production equal to or even slightly above that of last year.”

The industry’s challenge is to increase productivity, he said.

“In Colombia we produce 3.5 tonnes of oil per hectare and we think we could easily reach 5 tonnes per hectare as a general target,” Perez said. “That is the best insurance for periods of low prices.”

Colombia is the world’s fourth-largest producer – behind Indonesia, Malaysia and Thailand – of palm oil, which is used in food, cosmetics, soaps and as a biofuel.

Some 30% of Colombia’s production is exported.

Malaysia, the world’s second-biggest palm oil grower, plans to boost its market share in the EU by focusing on the countries that don’t traditionally buy the tropical oil, according to Plantation Industries and Commodities Minister Zuraida Kamaruddin.

It will be published in the coming days

The Indian government will not allow fertilizer companies to raise prices of crop nutrients during the winter season, Mansukh Mandaviya, chemicals and fertilizers minister, said on Tuesday.

A squeeze in global natural gas availability, with prices in Europe surging in response to halted flows through the Nord Stream pipeline last week, may prove to be beneficial for US farmers, Albert Chu of Newton Investment Management tells the WSJ. While low natural gas supplies in Europe will be limited to only heating and electricity, ample natural gas supplies in the US will allow for fertilizer production. “We have enough molecules to go around,” says Chu. As a result, crops in the US will likely be a lot healthier than their European counterparts. “Without fertilizer, you expect to see immediate yield drops,” Chu says.

Egypt to Require Wheat Suppliers to Register With New Exchange

Egypt’s General Authority for Supply Commodities has issued new instructions stating that it will not contract with wheat suppliers from the beginning of November unless they register with its new commodities exchange as members, according to traders who asked not to be identified discussing private information.

Following is a summary of Norwegian export prices and volumes for fresh and frozen salmon from Statistics Norway in Oslo: 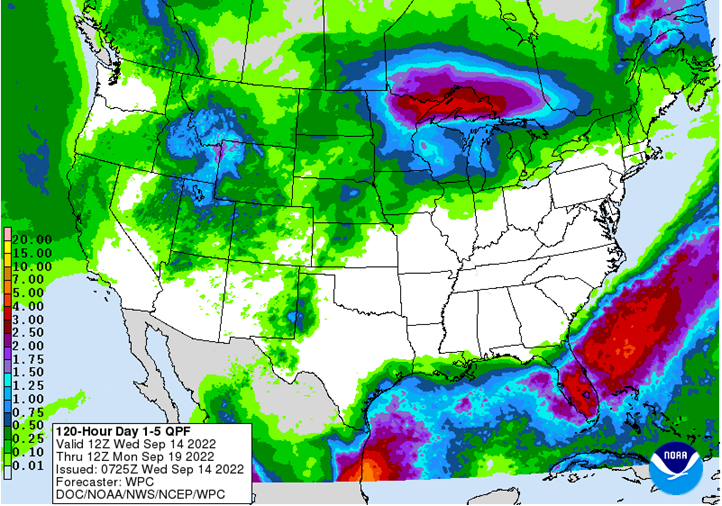 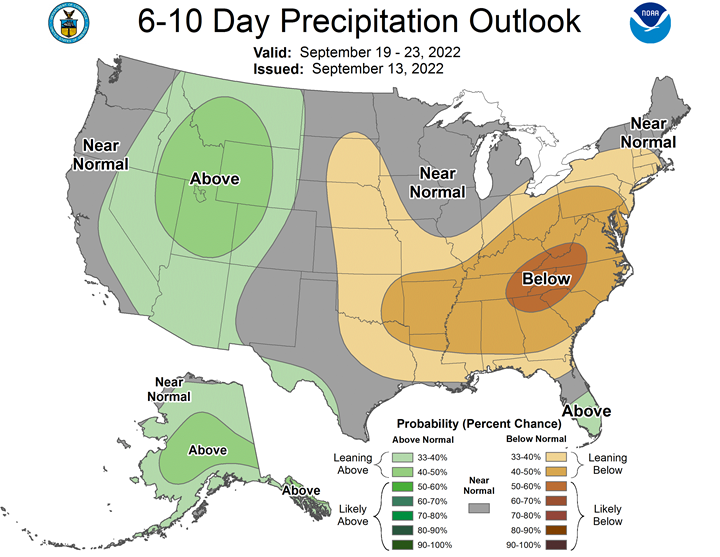 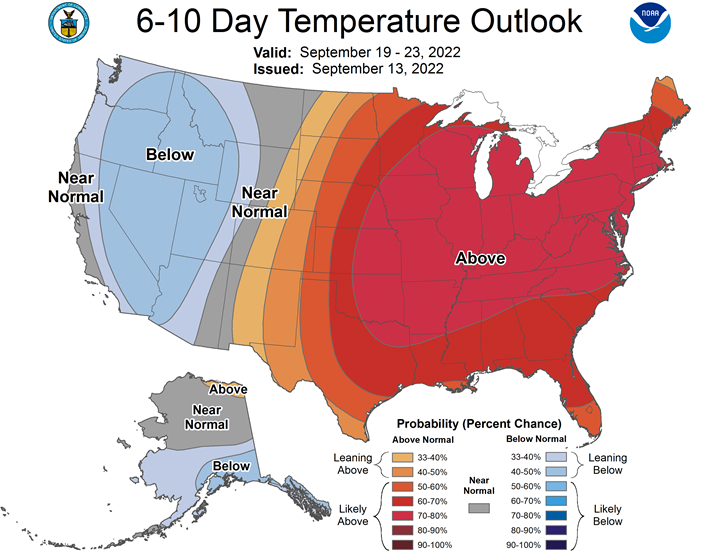 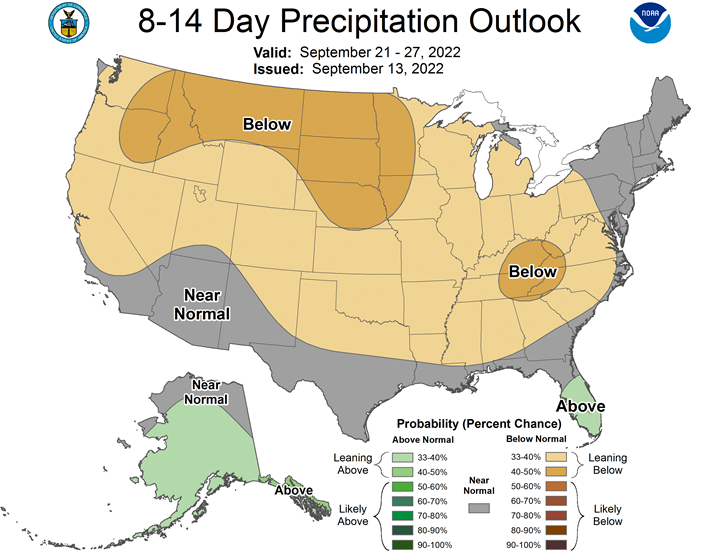 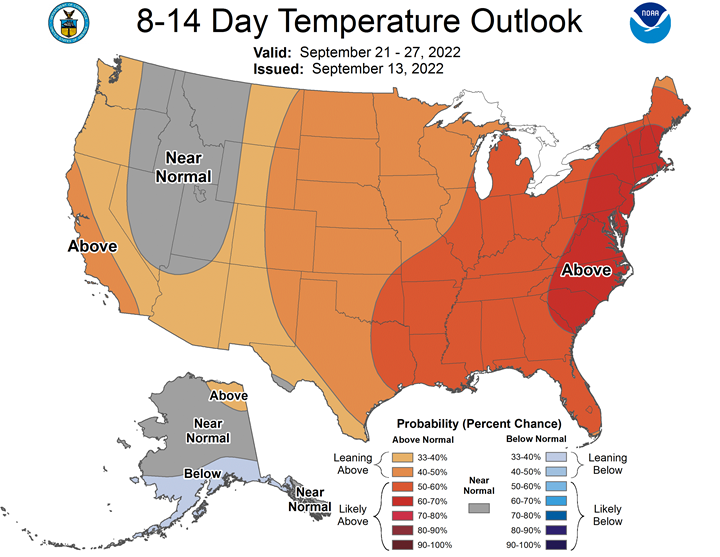 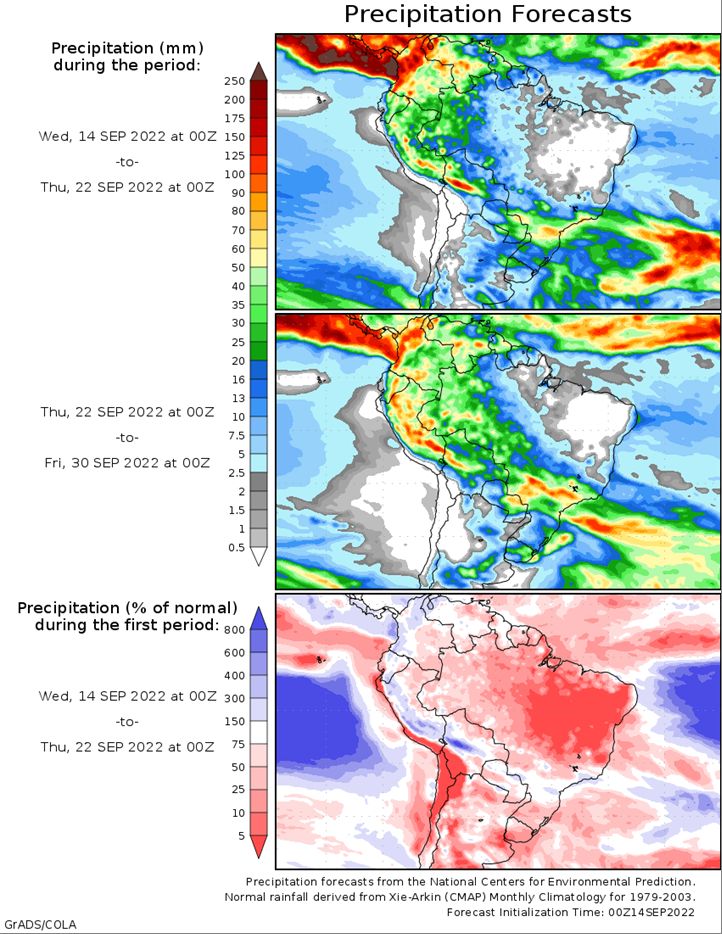