Highlights from the report: 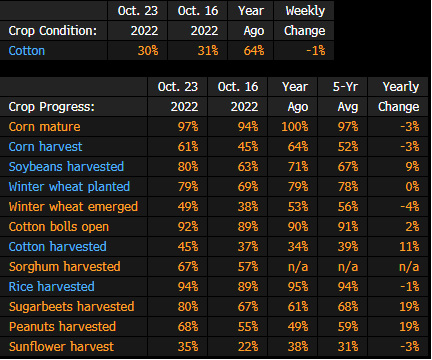 In week ending Oct. 20, according to the USDA’s weekly inspections report. 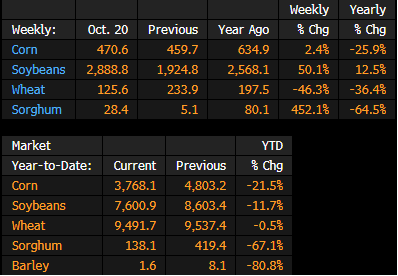 Ukraine Grain-Deal Coordinator Is Discussing How to Ease Backlog

There are currently 113 vessels registered for inspection and a further 60 vessels are waiting in Turkish territorial waters, the Joint Coordination Centre says in a notice.

Ukraine’s winter sowing area for the 2023 harvest could fall by 30% to 40% due to the Russian invasion, Deputy Agriculture Minister Markiyan Dmytrasevych told a Ukrainian-German business conference on Monday.

Ukraine traditionally sows winter wheat which accounts for around 95% of its wheat harvest.

Dmytrasevych gave no exact acreage for the crop.

Ukraine is keeping its forecast of the winter wheat sowing area for the 2023 harvest unchanged at 3.8 million hectares despite a delay caused by unfavourable weather, deputy agriculture minister Taras Vysotskiy told Reuters on Tuesday.

Ukraine sowed more than 6 million hectares of winter wheat for the 2022 harvest, but a large area has been occupied by Russian forces since the invasion in February and only 4.6 million hectares were harvested.

Weather conditions for Ukraine’s winter crops, including wheat and barley, are expected to improve in the wake of a strong anticyclone, which is approaching the war-torn country, Tetiana Adamenko, head of the agriculture department at the state-controlled Hydrometeorological Center, said by phone.

Australia’s wheat crop in the 2022-23 season is seen at 34m tons amid abundant moisture, USDA’s Foreign Agricultural Service said in a report.

“As the season comes to an end, the impact of the dry summer is also becoming clearer,” the EU’s Monitoring Agricultural Resources unit said Monday in a report that further cut yield forecasts for corn, sunflower and soybean crops.

The agents in the Brazilian wheat sector are closely monitoring both the progress of the harvesting in Brazil and the quality of the wheat being harvested, mainly in Paraná, where some crops were damaged by heavy rains. In Santa Catarina, estimates point to higher production, while in Argentina, the top wheat supplier to Brazil, the harvest is forecast to be even lower.

In Paraná, 54% of the wheat crop had been harvested by October 17th, according to Deral/Seab. Of the crops that are still developing, 60% were in good conditions; 28%, in average conditions; and 12%, in bad conditions, a worse scenario than that observed in the previous week, due to the rainy weather. In Rio Grande do Sul, activities have been slow, with only 5% harvested by October 20th, according to Emater/RS.

In Santa Catarina, 2.6% of the wheat crop had been harvested by the end of September, according to Epagri/Cepa. The are sown with wheat is expected to be 34% larger than that last season, estimated at 137.6 thousand hectares; productivity is forecast to grow by 3%. Thus, the output may hit 477.8 thousand tons, 37% higher than that from 2021.

In Argentina, production estimates were once again revised down by the Bolsa de Cereales, to 15.2 million tons in the 2022/23 season, due to the damages caused by frosts. Of the crops not harvested yet, 52% are in bad conditions; 37%, in average conditions; and only 11% in good conditions – the scenario last week was worse than in the previous week. In Russia, SovEcon has revised up production estimates to 100.6 million tons, 0.6% up from that forecast last month.

PRICES – Despite the expectations for a high harvest, the worse conditions of part of the crops have been raising wheat prices in Brazil. Between October 14 and 21, the prices paid to the wheat farmers in Paraná rose by 4%; in Rio Grande do Sul, by 1.54%; and in Santa Catarina, by 1.51%. In the wholesale market, values increased by 3.14% in PR, 1.42% in SC and 1.1% in São Paulo, however, values decreased 0.13% in RS.

U.S. exports of nitrogen fertilizers jumped to a multi-year high this summer after surging natural gas prices in Europe drove up costs of producing the crop nutrient there, making U.S. shipments more competitive.

The brisk U.S. sales highlight the far-reaching effect of the war in Ukraine on global food and energy supplies. Russia, under financial sanctions, is a major producer of fertilizer and natural gas, key in making nitrogen products to boost yields of corn and other crops.

Since Russia’s February invasion of Ukraine, Europe started weaning itself off Russian natural gas and a pipeline transporting ammonia from Russia to a Ukraine port shut down.

Tight fertilizer supplies have driven up crop nutrient prices so much worldwide that the United Nations warned this month of a “future crisis” of availability. European companies have been forced to close some fertilizer plants due to high costs.

Exports from the United States, the world’s third-largest producer, soared to 370,000 short tons of nutrient in August, more than double the year-earlier total, according to the most recent U.S. Census Bureau data, compiled by industry group The Fertilizer Institute (TFI) for Reuters. That figure is the highest monthly total since TFI began tracking the data in 2013.

European buyers are outbidding domestic buyers in both the United States and other exporters like Indonesia and Malaysia, said Alistair Wallace, principal at Argus Media in London.

Despite the surge in exports, separate TFI data shows that as of June, U.S. nitrogen fertilizer supply was at its second-highest level in the last decade, indicating a global dislocation, rather than shortage.

It is not yet clear whether the U.S. produced more than usual in July and August, or diverted a larger share of supplies to Europe, said Jason Troendle, economist at TFI, whose members include CF Industries and Nutrien

The United States is historically a small exporter, and its ability to backfill markets is limited, Troendle said.

The countries with the biggest year-over-year increases in U.S. purchases are in Europe – France, Belgium, Norway and Lithuania – as well as Morocco, Chile and Brazil, Troendle said.

European countries typically buy most of their imported urea, a form of nitrogen fertilizer, from North Africa, but are now purchasing it further afield, Wallace said.

EU nitrogen prices eased in mid-October as some European plants resumed production due to softening natural gas prices, he said.

European farmers are not able to stock up on fertilizer as much as they should ahead of planting next spring due to high prices and tight supply, said Pekka Pesonen, secretary-general of European farming group Copa-Cogeca.

According to the USDA’s Oct. 24 cold storage report released on the agency’s website. 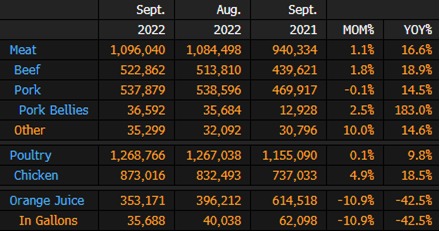 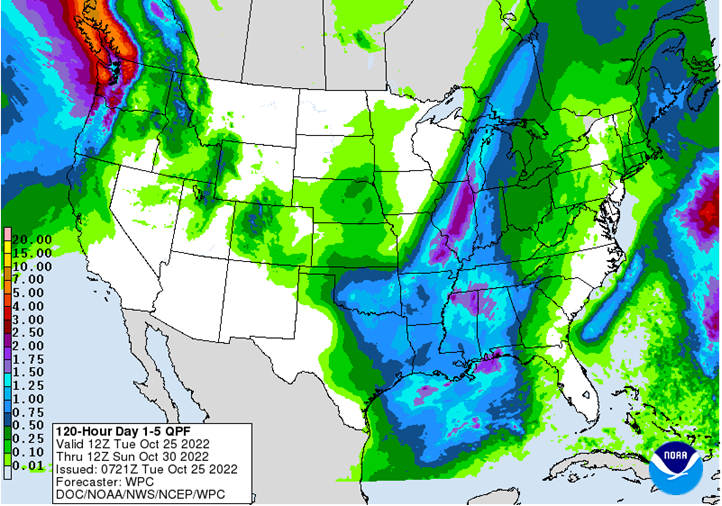 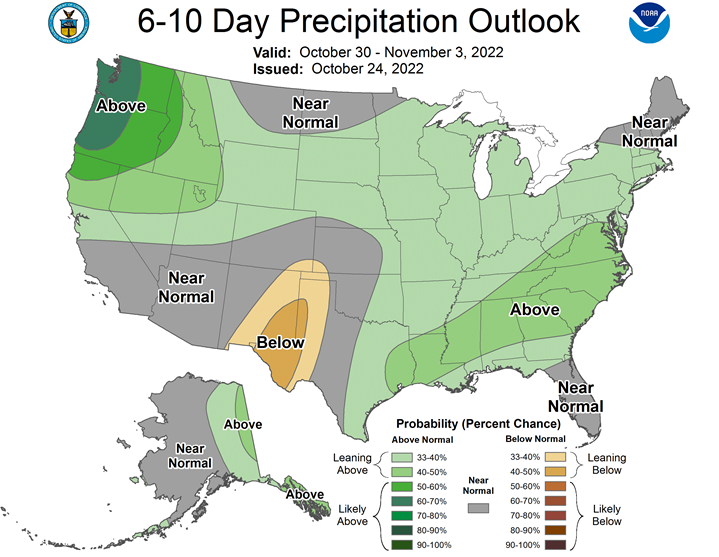 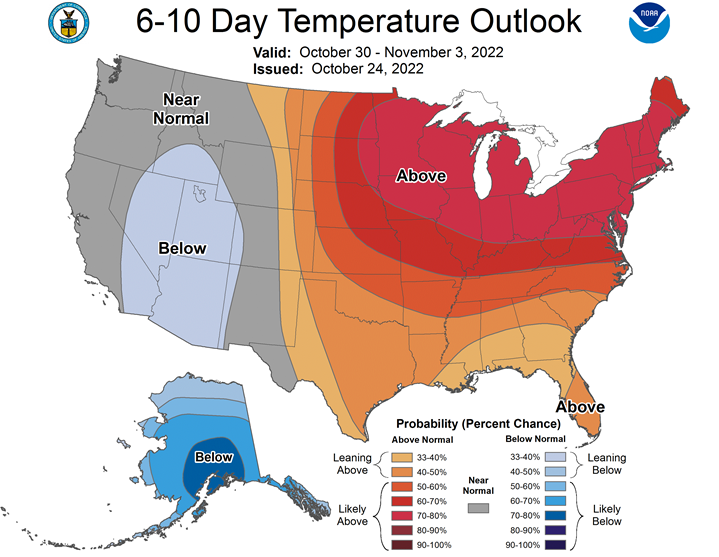 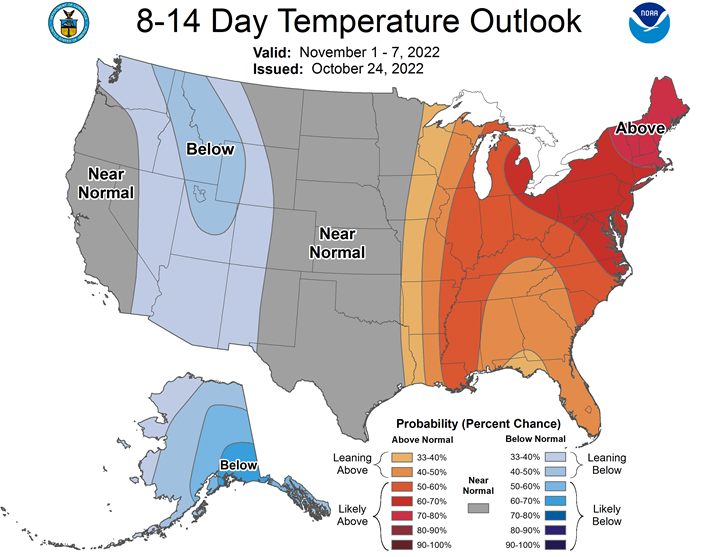 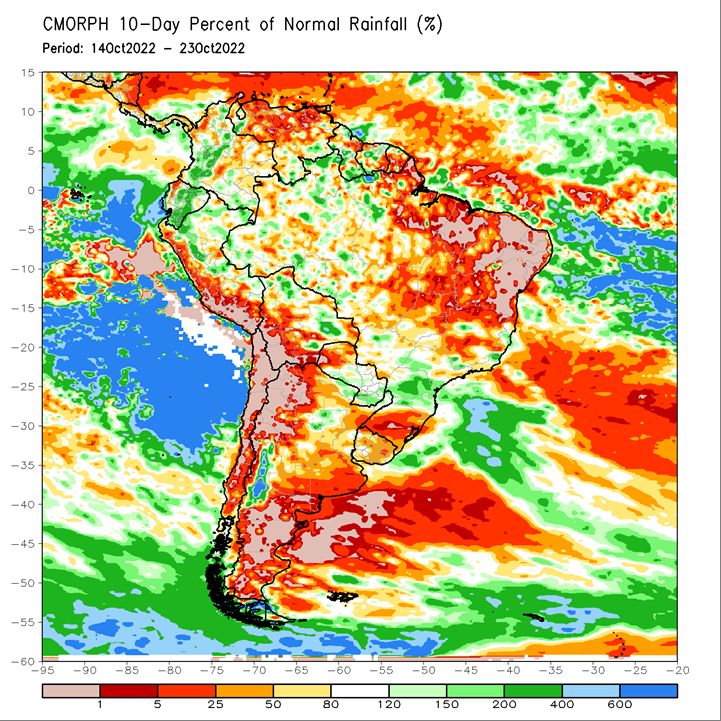 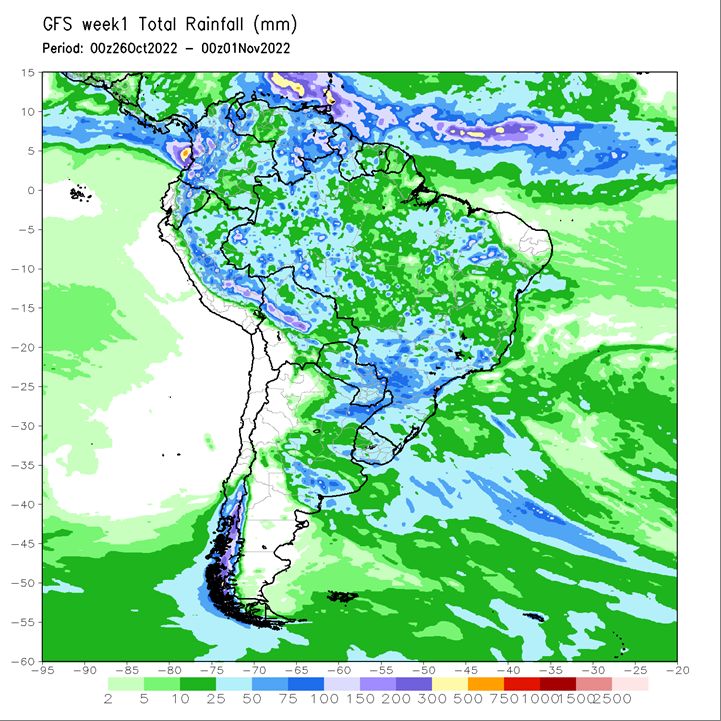 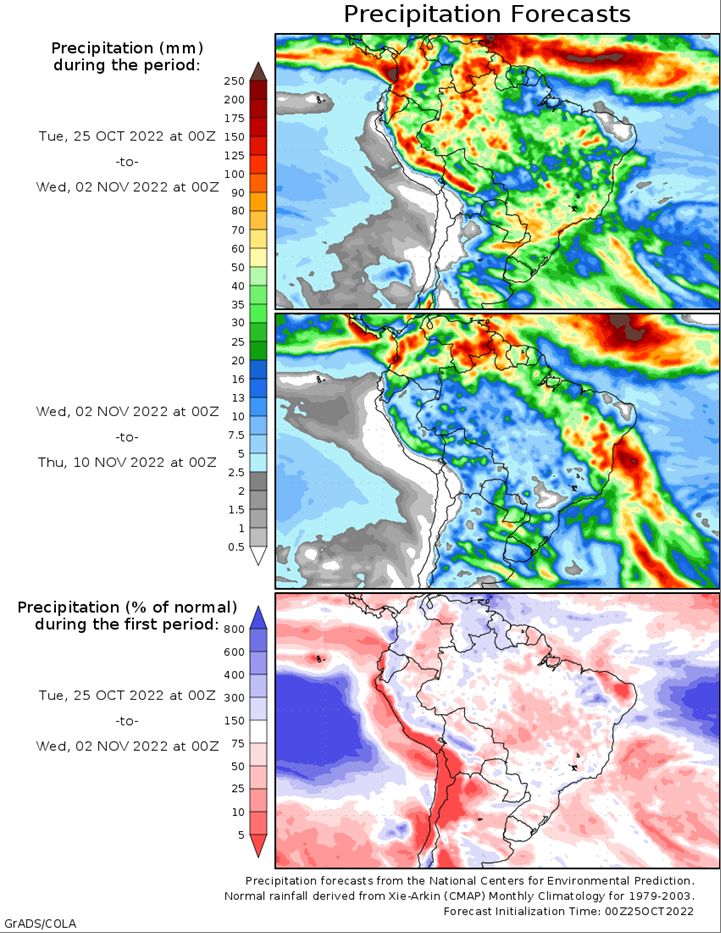 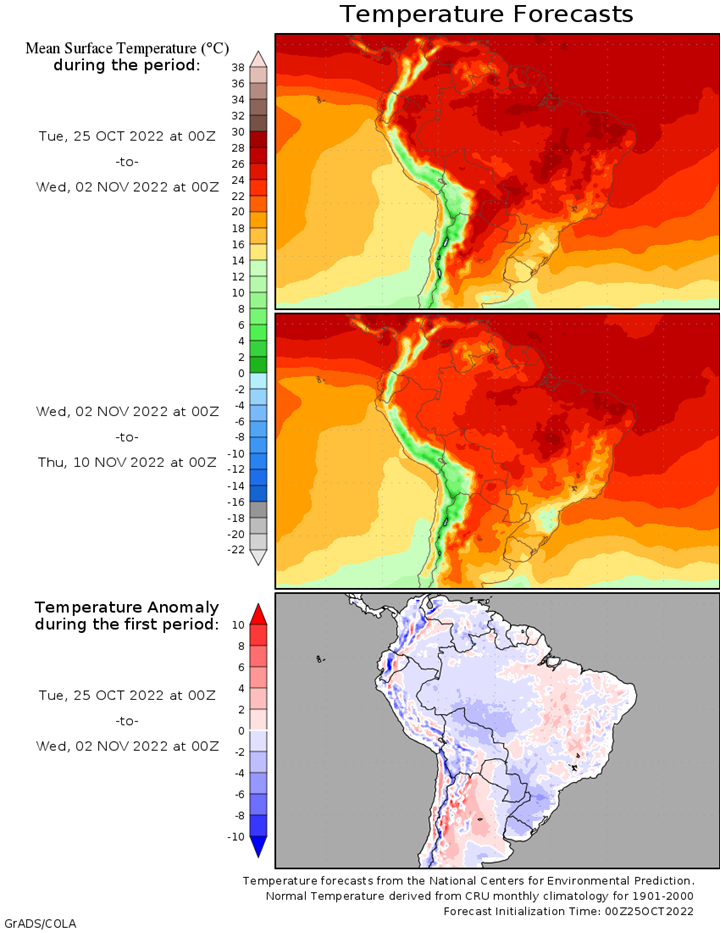 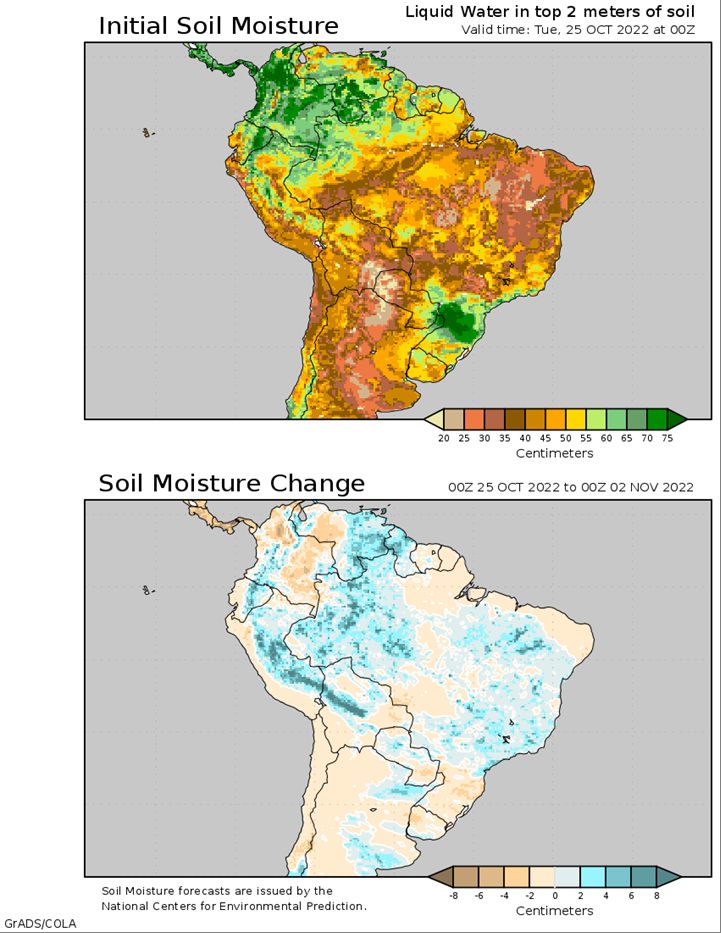