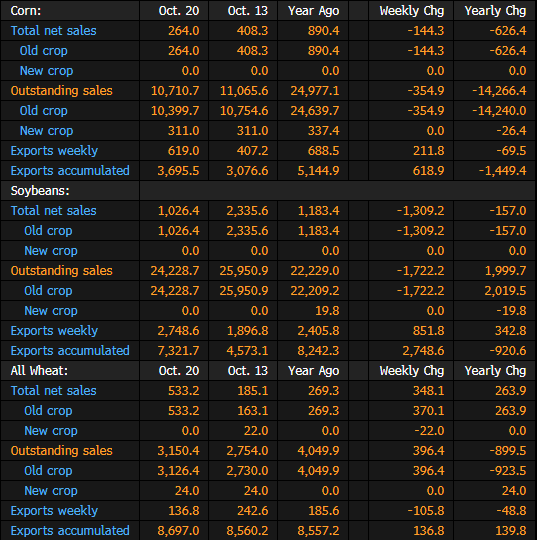 US Export Sales of Soybeans, Corn and Wheat by Country

The following table shows US export sales of soybeans, corn and wheat by biggest net buyers for week ending Oct. 20, according to data on the USDA’s website. 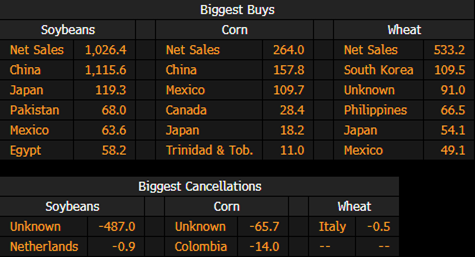 The following table shows US export sales of pork and beef product by biggest net buyers for week ending Oct. 20, according to data on the USDA’s website. 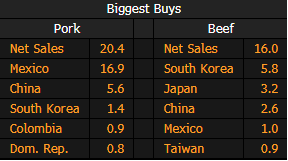 Much-needed rain improved conditions for 2022/23 wheat and corn in Argentina, where a prolonged drought has generated losses and area cuts for both crops, the Buenos Aires grains exchange (BdeC) said on Thursday.

The country’s main agricultural regions received between 20 and 100 millimeters of water from Tuesday to Wednesday, which brought relief for crops after significant rainfalls had not been recorded in the region since May this year.

“Important rains on sectors of the province of Buenos Aires improved the scenario for the sown wheat,” it said, adding that the wheat area with fair to dry humidity conditions fell 9 percentage points in one week, to 47% of the total sown.

Last week, the grains exchange lowered once more its estimate of the wheat harvest to 15.2 million tonnes due to the drought, below the 22.4 million harvested in the previous season.

There are still batches of wheat that have to define their yields. The cereal harvest begins in November and intensifies in December.

For the 2022/23 corn, the rainfall improved the conditions for the cereal and the exchange said that “58% of the lots have a water condition between optimal and adequate.”

The sowing of the cereal is having important delays due to the drought and, until Wednesday, Argentine farmers had planted 21.8% of the 7.3 million hectares that the exchange foresees for cultivation.

In its climate outlook report on Thursday, the BdeC said that most of the Pampean Region (Argentina’s agricultural core) will see “little rainfall” in the next week, likely to be less than 10 millimeters.

Argentina is a major international supplier of wheat and the world’s third largest exporter of corn.

The EU’s 2022 corn harvest is now seen at 54.9m tons, below a September outlook for 55.5m tons, according to a European Commission report.

Ukraine’s farmers have reaped almost 31m tons of grain from 7.7m ha or 70% of projected areas, about a half of last-year volumes for the same period, according to Agriculture Ministry’s data on its website.

Ukraine’s grain exports fell by 33% to 12.2m tons in the marketing year that started July 1, according to data on the Agriculture Ministry’s website.

Ukraine’s Grain Association urges United Nations to secure extension of grain deal with Russia to allow Kyiv to continue overseas shipments of grain, it says in a statement.

“A large build-up of ships is being artificially created in the port of Istanbul in order to put pressure on our experts, weaken controls and speed up the cargo inspection procedure,” Russia’s foreign ministry says in a statement.

Russia’s wheat-export duty will fall to 2,923 rubles ($47.41) a ton next week from 3,028 rubles, Interfax reports, citing the agriculture ministry.

The soft-wheat crop was 63% planted as of Oct. 24, up from 46% a week earlier, crops office France AgriMer said on its website.

Argentina Wheat Output May Fall To as Low as 12.5m Tons: Rosario

Argentina’s drought-and-frost-battered wheat crop may yield just 12.5m metric tons, down from its latest estimate of 13.7m, the Rosario Board of Trade said in a special report.

Govt sets crude palm oil reference price at $770.88/ton for Nov. 1-15, higher than $713.89 a ton in Oct 16-31, says Musdhalifah Machmud, deputy for food and agriculture at the Coordinating Ministry for Economic Affairs, by text messages.

Kazakhstan’s wheat and barley output is expected to rebound by 23% y/y to 14.5mn tonnes in the 2022-23 marketing year and regain its market share lost due to lower production last season, the Foreign Agricultural Service of the US Department of Agriculture (USDA) has projected.

With corn stalks facing greater risks of being toppled by extreme winds, Bayer AG is working to make the plants shorter.

So-called short-stature corn will grow around five feet (1.5 meters) to seven feet, compared with the traditional height of 9-to-12 feet, said Bob Reiter, head of research and development for Bayer’s crop science division.

The pivot to shorter plants comes as farmers face extreme weather events at a seemingly faster pace. In 2020, a severe derecho leveled grain fields with winds greater than 100 miles-per-hour (161 kilometers), causing $11 billion in damages in the US Midwest.

“This new system will be a game changer in corn production,” said Reiter.

The reduced stature also allows for greater planting density, which should limit yield loss for growers, the company said. Farmers will be able to use standard chemical equipment on the ground all year long rather than switch to planes to spray chemicals once the plants reach their full height.

The company expects to raise about 60,000 acres of the corn in the next year. Bayer, the largest crop biotechnology company in the world, plans to roll out the seeds nationally in 2024 and expects it to spread to more than 700,000 acres.

Some US Farms Are So Dry the Dirt Is Repelling Fertilizer

Drought is rapidly expanding across America’s crop belt, making it so dry that in some fields fertilizer is evaporating from the soil and plants are struggling to emerge from the ground.

Almost three-quarters of the US’s winter wheat growing area is in moderate to intense drought, according to the latest government data. That’s a record high based on records going back to 2000. Dryness this time of year not only stunts the growth of winter wheat, but can hamper fertilizer applications on fields for crops to be planted in the spring — both of which could reduce crop yields and push prices higher.

A corn farmer trying to put fall fertilizer down to help in the spring isn’t going to invest in applying the nutrients if a lot of it is going to evaporate and disappear, said Gary Millershaski, chairman of the Kansas Wheat Commission.

Millershaski, who farms wheat and corn in the severely drought-struck southwestern part of the state, said he’s planting 4,000 acres of winter wheat this year and will be happy if he gets 1,500. “When it is this dry you don’t know if will sprout and die or come up next year.”

Farmers are busy finishing up planting winter wheat — a variety that typically comes up from the ground before going dormant during the coldest months and then resuming growth as temperatures warm. But lack of moisture could hinder or even prevent some plants from emerging until spring, putting yields at significant risk.

The rate of emerged plants is already trailing the average pace even though planting has gone as planned, said Mark Nelson, director of commodities at the Kansas Farm Bureau.

While spring fertilizer applications are seen as more critical, some farmers routinely rely on early application due to soil conditions or other issues. Growers will need to be extra careful this year to test their fields to see how much fertilizer is actually needed.

“It’s fair to say we are concerned about fertilizer applications in the dry soils and how effective they are going to be,” said Nelson.

US Crops in Drought Area for Week Ending Oct. 25: USDA

The following table shows the percent of US agricultural production within an area that experienced drought for the week ending Oct. 25, according to the USDA’s weekly drought report. 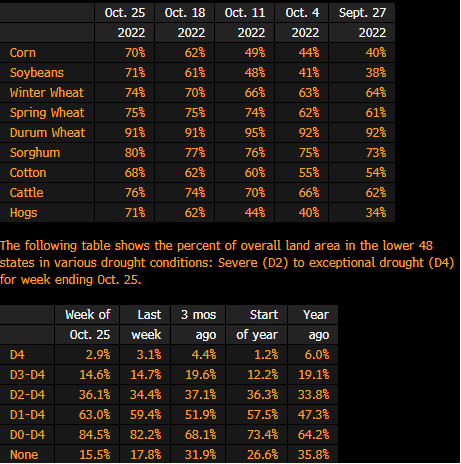 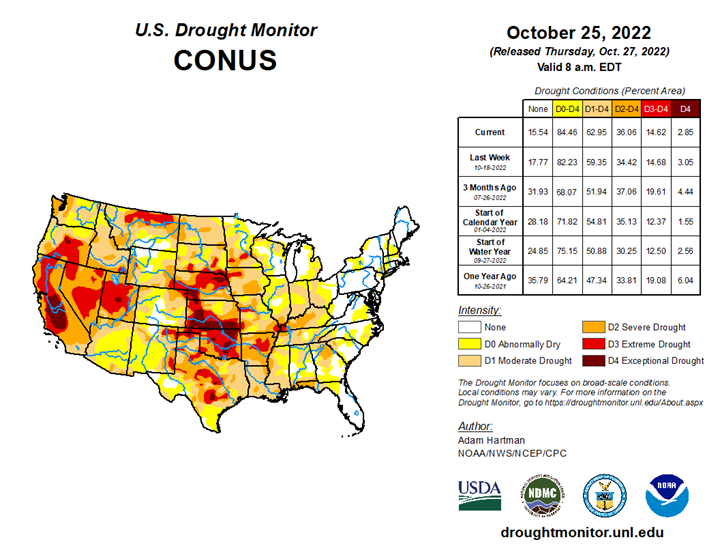 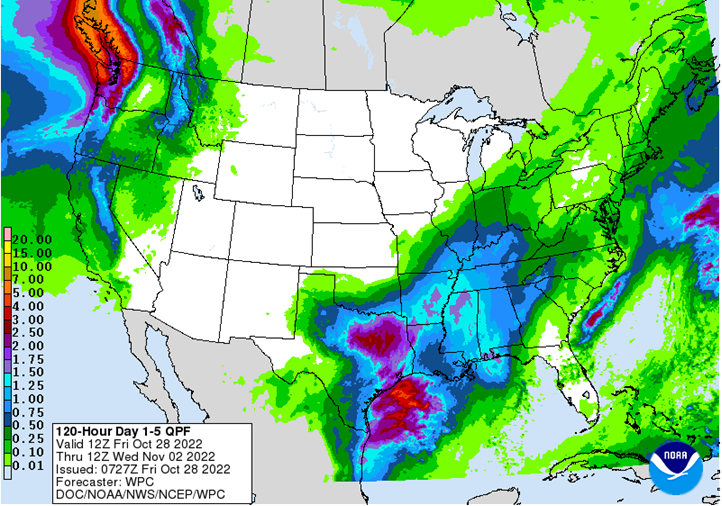 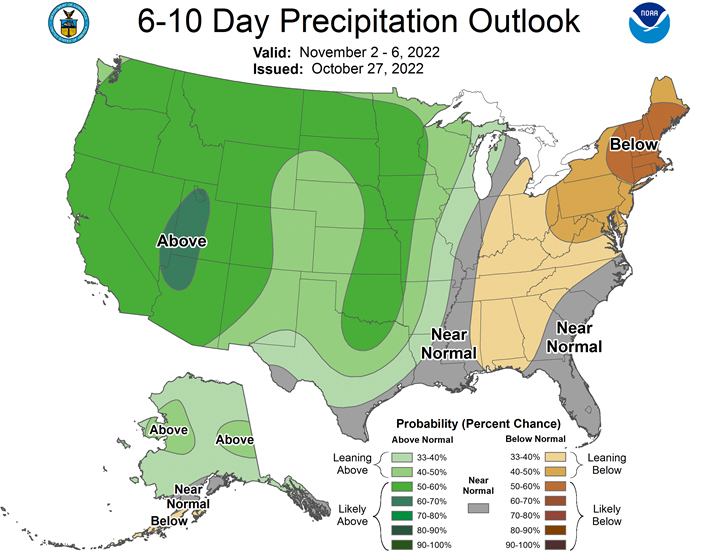 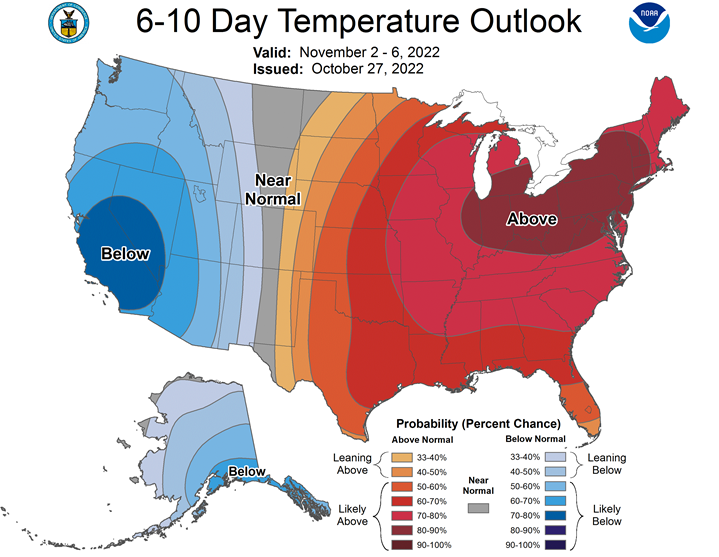 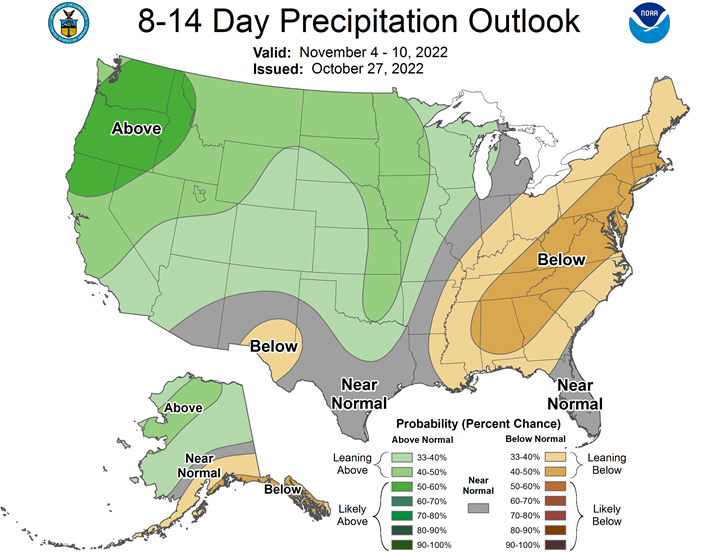 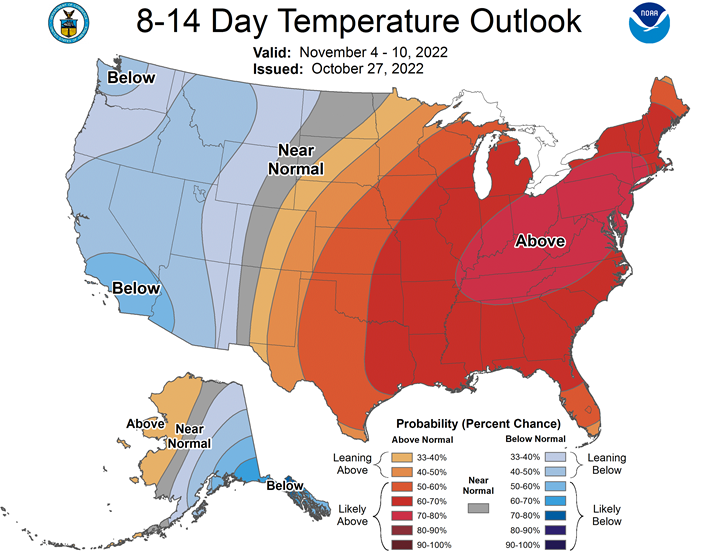 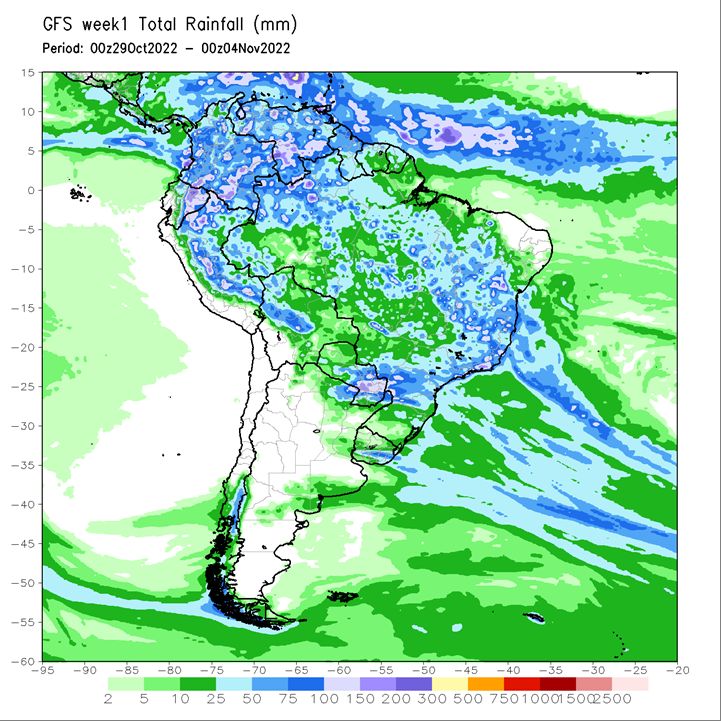 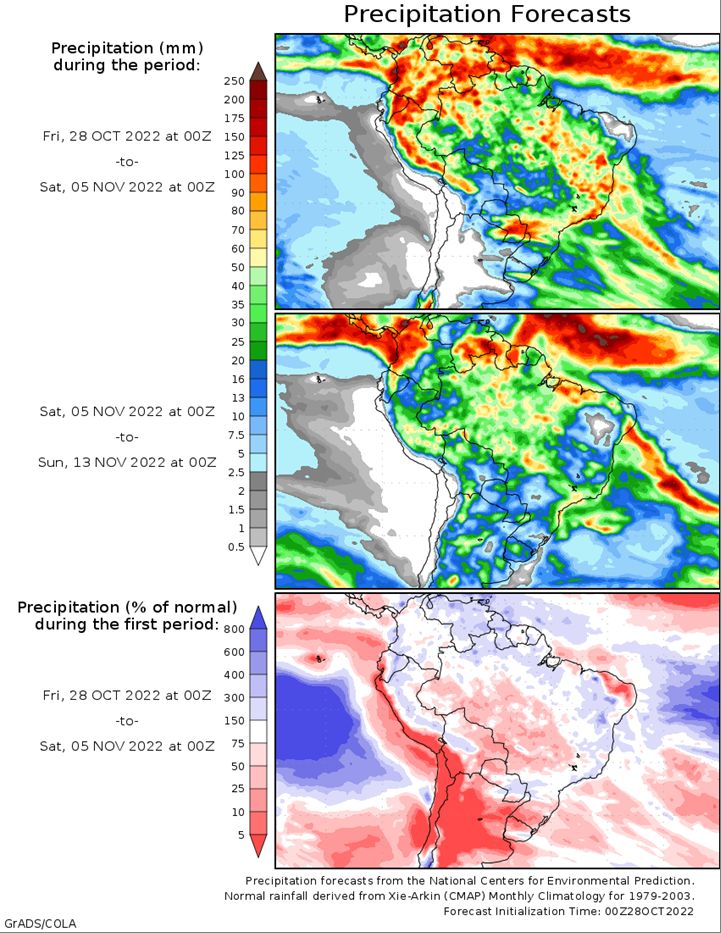 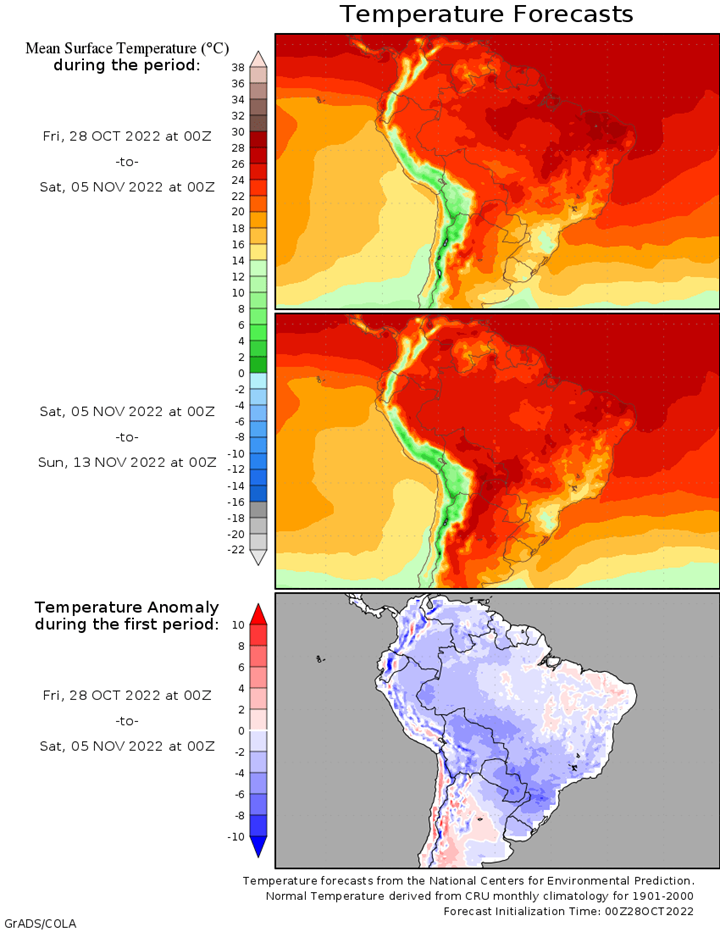 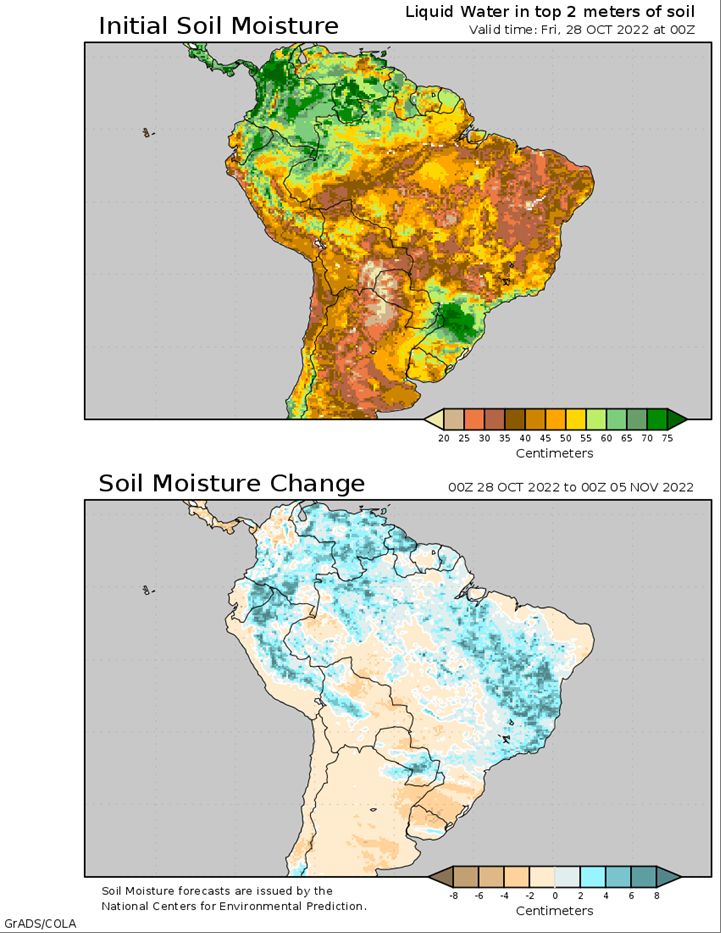