Western Midwest Forecast: Mostly dry through Wednesday. Isolated to scattered showers Thursday-Friday. Temperatures above to well above normal through Friday.

In week ending Oct. 27, according to the USDA’s weekly inspections report. 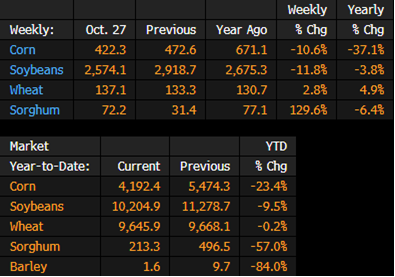 Following is a summary of USDA inspections for week ending Oct. 27 of corn, soybeans and wheat for export, from the Grain Inspection, Packers and Stockyards Administration, known as GIPSA.

US Crop Progress and Conditions for Oct. 30: Summary

Highlights from the report: 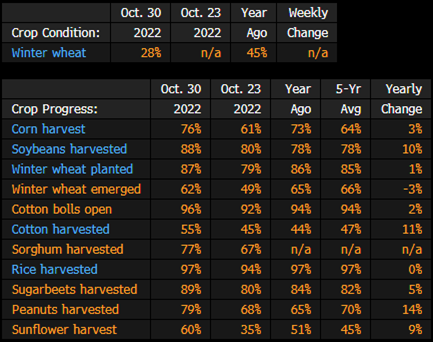 Ukraine Grain Flows to Port Freeze Up After Russia’s Provocation

Deliveries of Ukrainian crops to ports are grinding to a halt, as the agricultural sector becomes more circumspect in the face of further Russian disruption, according to the Ukrainian Agribusiness Club.

Cargoes flowing from inland largely stopped as of Monday morning, said Kateryna Rybachenko, its vice chair. That includes a train loaded Sunday by Agro-Region — a farming company where she is a board member — with 3,500 tons of corn destined for delivery at port to a trader.

“We don’t have a clear situation and a clear view what will happen in the next days,” Roman Slaston, chief executive of the club. “The grain operators and the grain port-terminal operators see this uncertainty. The flow of grain to the seaports – it’s slowed down definitely.”

The standstill comes after Russia over the weekend said it would no longer support the Ukraine crop-export deal that was agreed in July, and has revived the country’s seaborne trade. Grain vessels are still sailing from the country on Monday, but it’s uncertain how long that will last, with a Kremlin spokesman warning further shipments will be “much riskier.”

The industry wants to verify that ships can continue to move and routes remain protected, Rybachenko said. Farmers can deliver grain for export over the border with the European Union, although the routes are longer and costlier.

“It is working at the moment without the Russian side,” Ukraine deputy agriculture minister Markiyan Dmytrasevych said Monday at an International Grains Council event. “But we cannot rely on this corridor being permanent, because any missile strike or any accident can stop it at any moment.”

Russia warned that the security of ships sailing Ukraine’s grain-export corridor cannot be guaranteed without additional conditions, increasing risks for Black Sea trade after Russia halted involvement in a key accord.

“The movement of ships along the security corridor is unacceptable,” Russia’s Defense Ministry said in a statement Monday, repeating unsubstantiated claims that Ukraine used the corridor for military purposes. The ministry emphasized that Russia hasn’t abandoned the deal but just suspended its involvement.

The comments follow repeated criticism from Russian officials. Earlier, Ukraine said that Russia struck two civilian tugboats involved in transporting a grain barge near Ochakiv, to the east of the UN-agreed export corridor.

Grain prices surged after Russia said it was suspending its involvement in the deal. The UN said on Sunday that four vessels planned to move inbound and 12 outbound from Ukrainian ports on Monday. At least one of the inbound ships appeared to have turned back, while another did not enter the corridor.

Turkish and Russian defense officials discussed the grains corridor by phone on Monday. The deal was brokered by Turkey and the UN.

United Nations Secretary-General Antonio Guterres is engaged in “intense” talks aimed at reversing Russia’s suspension, spokesman Stephane Dujarric said. The UN team at the Joint Coordination Centre in Istanbul will hold discussions with their Russian counterparts to “try to get some clarity” on the statement from Russia’s defense ministry, he said.

Ship Bound for Odesa Under Grain Deal Appears to Turn Back

The Ocean Legend, one of four ships expected to sail to ports in greater Odesa through Ukraine’s safe corridor, turned back after sailing most of the way through the Black Sea, ship-tracking data from Sea by Maritech showed.

Russia will be forced to take its own measures to control ships passing without its approval in the Black Sea, Interfax reports, citing Russia’s permanent representative in the UN, Vasily Nebenzya, as saying at a meeting of the UN Security Council.

Ukraine Tries to Use All Capacity of Odesa Ports: Official

The shrinking Mississippi River has hobbled the most efficient channel for moving US soybeans onto world markets, prompting a pivot to alternatives from Puget Sound to Texas to the Great Lakes.

Typically, more than half of all US soybean exports traverse the Mississippi River but after weeks of scant rainfall, water depths have dwindled, raising barge costs to an all-time high. As a result, ports in places like southeast Texas that normally handle less than 5% of the nations soybean exports are being thrust into action.

“It’s in dire condition and it’s getting worse,” Mike Steenhoek, executive director of the Soy Transportation Coalition, said by phone. “People are looking for what’s their B, C and D options.”

The US Department of Agriculture said 2.57 million tons of American soybeans were inspected in the week ended Oct. 27, a drop of 12% from the previous week. The Mississippi River accounted for less than a third of the shipments, with supplies also leaving ports in Alabama and elsewhere, data showed on Monday.

Compares with 34% a week earlier, and 52% a year before, according to an emailed report from consulting firm AgRural.

The Pampas crop belt will see lower-than-normal precipitation and higher-than-normal temperatures over the next three months, according to maps in a National Weather Service report.

European Union soybean imports in the 2022/23 season that started on July 1 had reached 3.66 million tonnes by Oct. 30, against 4.09 million by the same week in the previous season, data published by the European Commission showed on Monday.

EU sunflower oil imports, most of which usually come from Ukraine, were at 559,487 tonnes, against 551,588 tonnes a year earlier, the data showed.

The European Commission usually releases the weekly EU grain export and import data on Tuesdays but relased them on Monday this week ahead of the Nov. 1 All Saint’s Day public holiday in Belgium, home to the EU executive’s headquarters.

Soft wheat exports from the European Union in the 2022/23 season that started on July 1 had reached 11.54 million tonnes by Oct. 30, data published by the European Commission showed on Monday.

The European Commission usually releases the weekly EU grain export and import data on Tuesdays but released them on Monday this week ahead of the Nov. 1 All Saint’s Day public holiday in Belgium, home to the EU executive’s headquarters.

Truckers who support Brazil’s outgoing President Jair Bolsonaro escalated their protests on Monday, blocking roads in 20 states in an action that could affect agricultural exports in one of the world’s top food producers and cause wider economic chaos.

Bolsonaro lost Sunday’s election to leftist former President Luiz Inacio Lula da Silva, but has yet to concede defeat. He will not publicly address his defeat until Tuesday, a cabinet minister said on Monday evening, amid doubts over whether the far-right nationalist will accept Lula’s victory.

In Brasilia, police shut off traffic access to the central government esplanade on a tip that Bolsonaro supporters were planning to occupy the square in front of the Supreme Court, which they consider has acted to favor Lula.

Brazil’s federal highway police said 236 protests had partially or fully blocked roads in 20 states. Truckers – who have benefited from Bolsonaro policies such as lowering diesel costs – are one of the president’s key constituencies, and they have been known to disrupt Brazil’s economy when they shut down highways.

The highest number of blockades was in Santa Catarina, a state where Bolsonaro has a massive support base, and Mato Grosso do Sul, an important grains-growing and cattle state, according to the highway police national branch.

Santos port, from where much of Brazil’s grains are exported, told Reuters earlier on Monday that the protests had not yet affected cargo movement. Paranagua’s port authority said one of the main roads giving access to its port was being blocked by protesters, but that there was no immediate disruption to cargo movement.

One of the state’s main exports this time of year is Brazil’s winter corn crop, which is planted after soybeans are harvested.

“It’s too soon to say if it’s going to interfere with the flow of production, because the blockades started yesterday,” Corral said. “I don’t know how long it will last.”

Rota do Oeste, a toll road operator that administers an 850-km (530-mile) stretch of the BR 163 highway that cuts through Mato Grosso said at around 2.30pm local time there were blockages in the regions of Nova Mutum, Sorriso, Sinop, Lucas do Rio Verde and Rondonopolis.

Evandro Lermen, a member of grain cooperative Coacen in the Brazilian ‘soy capital’ Sorriso, told Reuters corn shipments were not being disrupted by the protests.

He said trucks had not been not loaded with corn over the weekend because of a Nov. 2 national holiday.

“We are not worried,” he said, adding that shipping schedules showed no delays.

Rumo, a leading rail company that operates Latin America’s biggest grain terminal in Rondonopolis, said earlier Monday that none of its operations in Brazil had been affected so far.

WHEAT/CEPEA: Weather reduces supply in both Paraná and Argentina

As the wheat harvesting advances in Paraná, decreases in productivity and quality have been observed in many regions. This scenario, which is being observed in Argentina too, is due to the unfavorable weather. Also, Brazilian agents are aware of the possibility of grains exports from the Black Sea, however, Russia is not expected to renew the agreement. In this case, importers would have to purchase grains from the United States and Argentina.

In Paraná, Deral/Seab’s new estimates point to a decrease of 3.57 million tons in the state’s wheat production because of the drought and, after that, frosts and high rainfall. Besides, the quality of the wheat already harvested has decreased. By Oct. 24th, 63% of the wheat crops in PR had been harvested. Of the crops still developing, 63% were in good conditions; 29%, in average conditions; and 8%, in bad conditions, which is a better scenario than that in the previous week.

In Argentina, according to information from Bolsa de Rosário, with low rains during wheat sowing and crops development, the harvest may be the lowest since the 2015/16 season, estimated at 13.7 million tons. It is important to mention that last crop was a record in Argentina, totaling 23 million tons.

Indonesia will extend its crude palm oil exports levy waiver until the end of the year providing reference prices stay under $800/ton, according to the coordinating ministry for economic affairs.

Nutrien Agrees to Buy Fertilizer Retailer to Expand in Brazil

Following is a summary of US agriculture prices paid and received from the USDA. 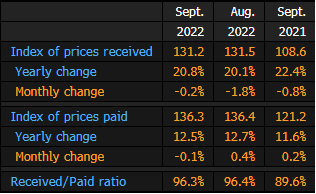 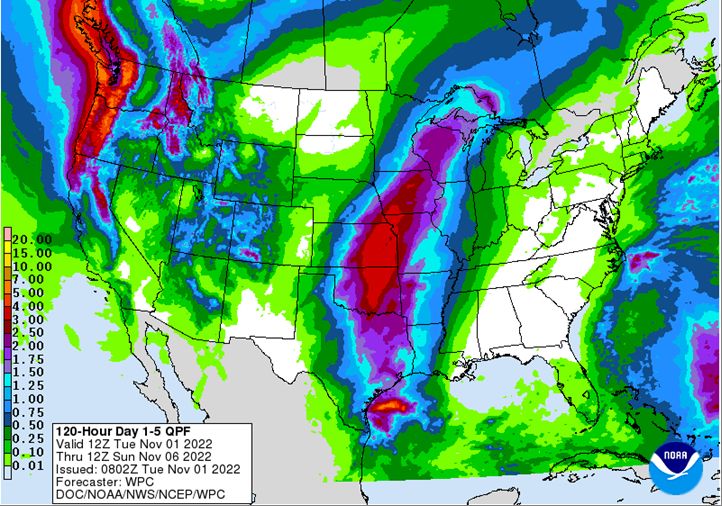 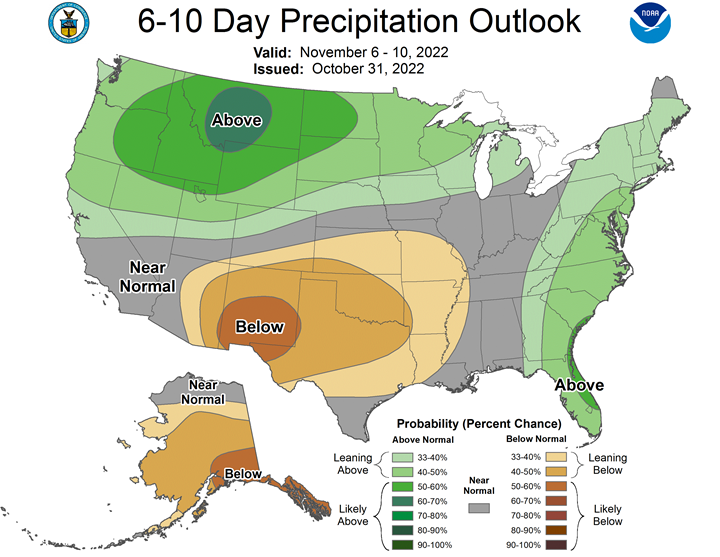 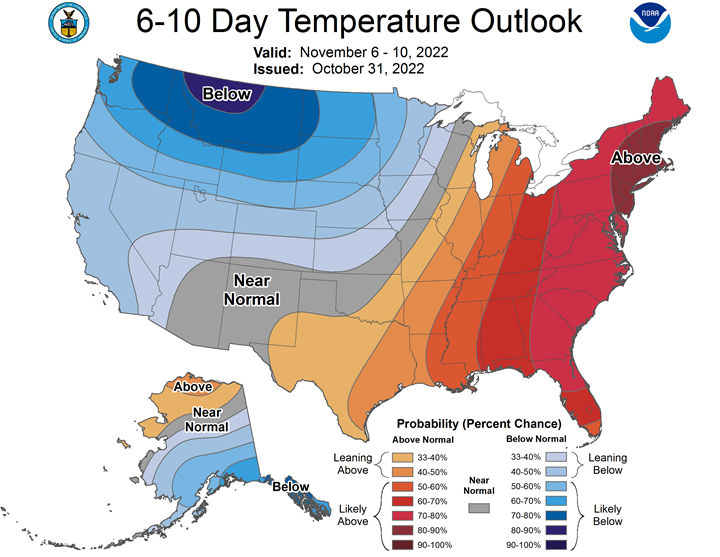 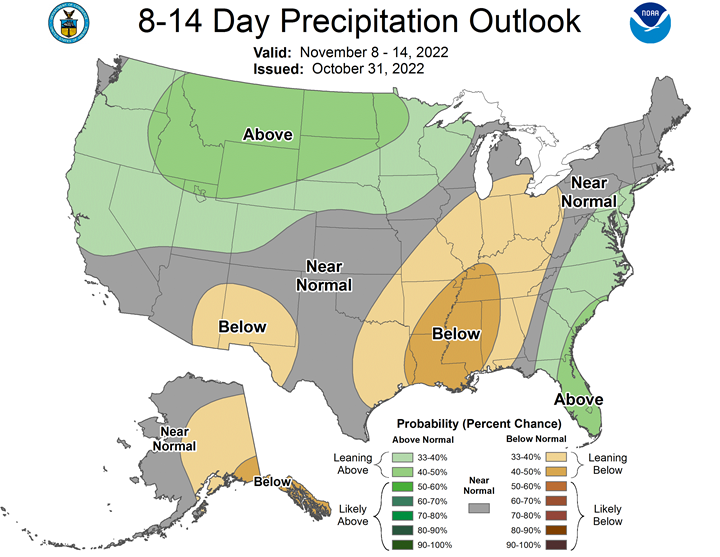 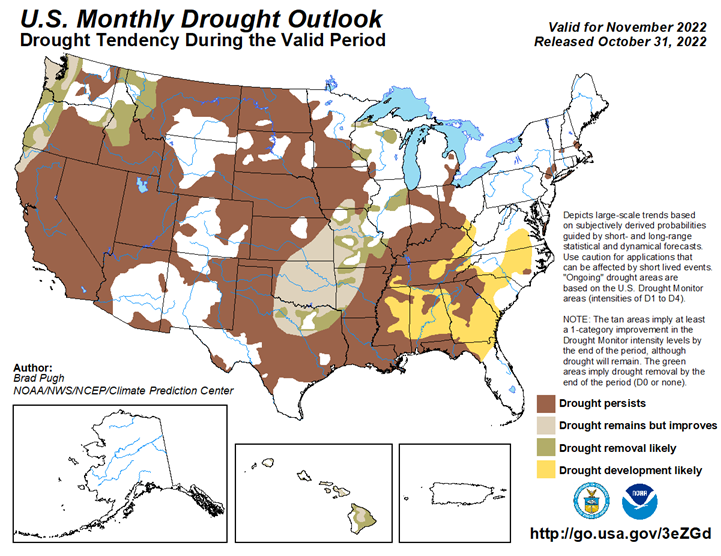 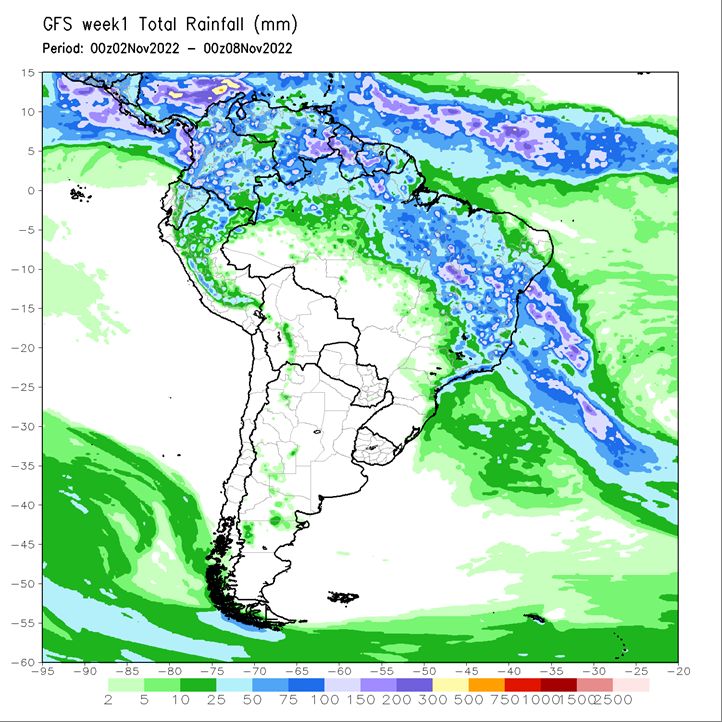 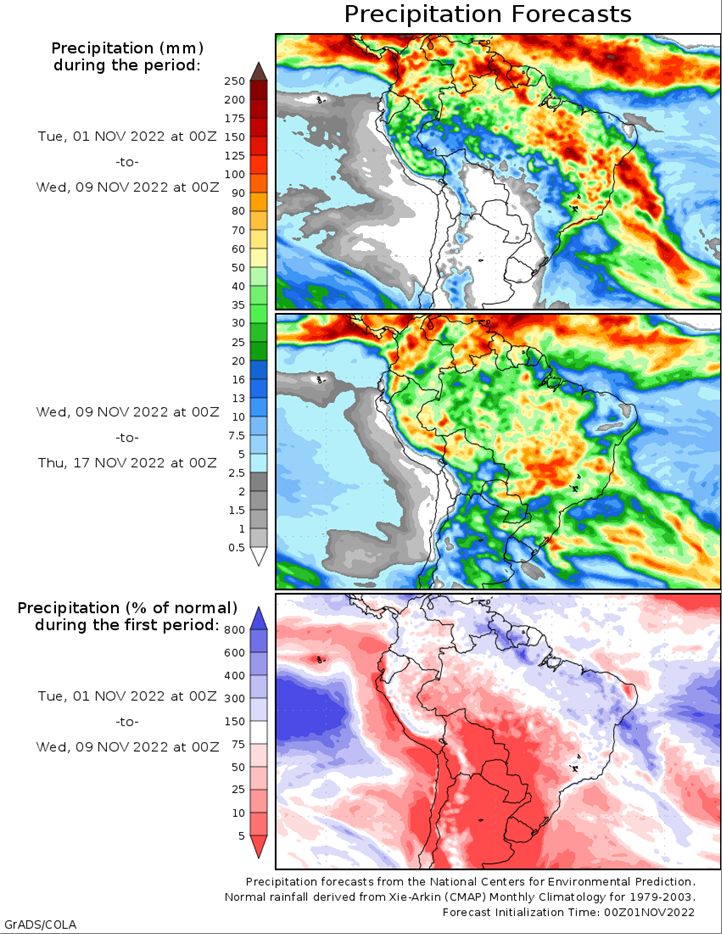 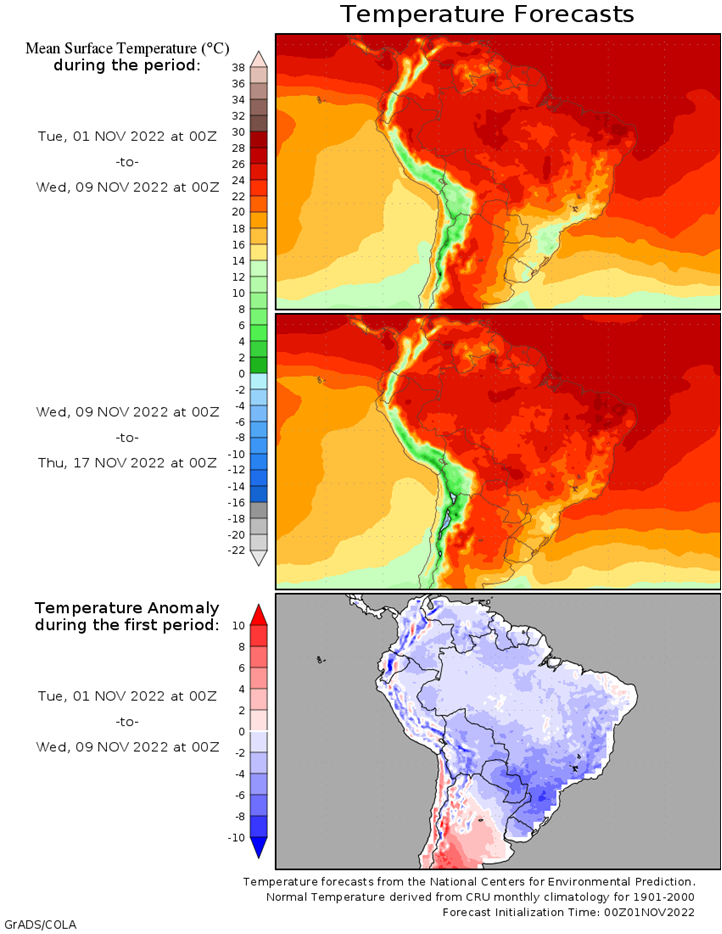