Output and stockpile projections for the week ending Oct. 28 are based on six analyst estimates compiled by Bloomberg.

The EIA in Washington is scheduled to release the report at 10:30am Wednesday

US Corn Used for Ethanol at 383.1M Bu in September

The following table is a summary of US corn consumption for fuel and other products, according to the USDA.

US Soybean Crushings at 168M Bushels in September: USDA 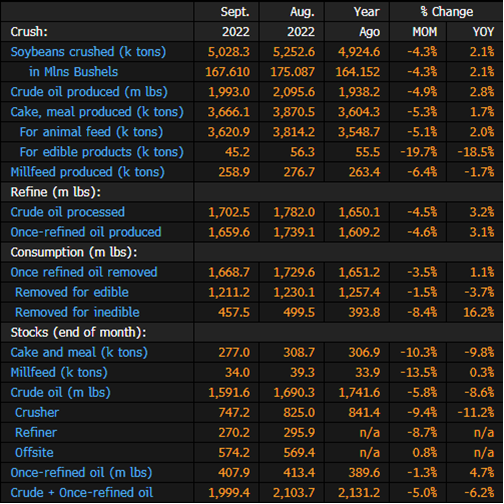 The United Nations said vessels loaded with grains are expected to move through Ukraine’s crop-export corridor on Thursday.

The UN said earlier that ships would be halted on Wednesday, without giving an explanation. The halt was announced after Russia warned that vessels weren’t safe using the route. Wheat prices rose on news of the disruption.

Russia suspended its role in the crucial Black Sea export pact over the weekend. The agreement — signed in July — guaranteed the safe passage of Ukraine crop exports, which are badly needed by food importers amid surging prices and a global cost-of-living crisis.

“We expect loaded ships to sail on Thursday,” the UN coordinator for the Black Sea Grain Initiative said in a tweet. No movements are planned for November 2 under the initiative, he added.

Grain vessels continued to leave Ukraine on Monday and Tuesday, even after Moscow withdrew its support for the deal. The UN said Tuesday those movements were “temporary and extraordinary.”

Ukraine is one of the world’s top grain and vegetable-oil suppliers, and US President Joe Biden has said Russia’s pullback from the deal will increase global hunger. Ukraine’s farmers are in the midst of autumn harvests and may have to redirect crops along costlier and lengthier export routes by rail, road and river if the disruption to vessel traffic lasts.

“Russia should clearly know that it will receive a tough response from the world to any steps that disrupt our food exports. This is literally a matter of life for tens of millions of people,” Ukrainian President Volodymyr Zelenskiy said Tuesday in his night address to the nation. “Pressure on Russia for the sake of guarantees of food security is now needed from everyone.”

There are 110 cargo ships awaiting inspection in Istanbul to travel through to the Black Sea and load Ukrainian grain, said Yuriy Vaskov, Ukraine’s deputy infrastructure minister. He remained optimistic on the prospects of the grain accord even after Russia’s suspension, he said in an interview before the UN announcement.

Still, Kyiv is preparing contingency plans, Vaskov said. The nation has managed to boost logistics capacities of its three Danube River ports near the Romanian border by at least five times and railway capacities as much as twofold, he said.

The UN will issue another update on the status for the crop corridor on Wednesday, a spokesperson for the secretary-general said. The agency is “exerting all efforts” to resume full participation in the grain deal, a statement said.

Ukraine’s grain exports fell by 32% to 13.4m tons as of Nov. 2, country’s Agriculture Ministry says on its website.

The Indian government said on Tuesday that it would exempt wholesalers and big chain retailers of oilseeds and edible oils from the current stock limit order, according to a statement.

India is the world’s biggest importer of edible oils such as palm oil, soyoil and sunflower oil.

The main road providing access to Paranagua Port, in Parana state, is blocked by protesters, affecting truck reception in one of the main Brazilian export ports, the Paranagua port authority says in a note.

The protests are hampering road shipments of grain, meat and fertilizer around the country, while disruptions to feed distribution put chicken and pork production at risk, according to people familiar with the matter, who asked not to be named for safety reasons. The Paranagua port authority said in a note early Tuesday that the main road giving access to the port was blocked, delaying truck deliveries to one of Brazil’s main export sites.

Truck drivers have led protests by backers of incumbent President Jair Bolsonaro following his defeat in Sunday’s election to Luiz Inacio Lula da Silva. Protests that have spread across the country are a consequence of dissatisfaction with the election, Bolsonaro said in his first speech after the ballot outcome. The president vowed to follow the constitution, but didn’t formally concede. While defending peaceful demonstrations, he didn’t directly ask protesters to end the blockades.

An extended blockade of trade routes would cripple the ability of the world’s biggest crop exporter to move soybeans, corn and coffee to ports, and threaten to leave shelves empty at supermarkets around the country. Supermarket group Abras has reported shortages of some products, according to Valor newspaper.

Brazil’s Federal Road Police has dismissed 339 blockades in Brazilian roads as of 3 pm local time, while dozens of protests were still reported in all regions, according to its official Twitter account.

Transportation of agricultural products is down by almost one-third as of the start of protests Monday compared to the previous week, according to a provider of road freight in the country. Of that, the number of trucks loaded with soybeans fell by almost half, corn dropped by 40% and fertilizer by 18%.

Not only have shipments of live animals, feed and refrigerated meat been disrupted, production in some meatpacking plants has started to slow, according to one of the people.

Soy-processing plants, which turn the beans into meal for animal feed and oil used in everything from cooking to cosmetics, also are struggling to receive and send cargoes to ports, said another person. Biodiesel production has been the most affected so far.

Orange juice production is nearly halted, as truck drivers are refusing to take cargoes as they want to avoid protesters, another person said.

The situation is beginning to hit the fuel sector, with fewer orders reported at distributors due to concern that deliveries would not reach clients on time, while supply issues are more prominent at smaller ethanol distributors, mainly in the south of the country. The National Oil Agency (ANP) said it’s in contact with distributors to prevent fuel shortages.

The Brazilian Petroleum and Gas Institute (IBP), which represents Big Oil in the country, said in a statement that it’s worried about potential fuel shortages if protests linger, especially given blockages in Santa Catarina, Parana and Sao Paulo states.

A Petroleo Brasileiro SA spokesperson said there is no impact on refinery operations, as the fuel is distributed mainly through pipelines.

Following is a summary of key Brazilian agriculture and mining exports by volume, from the Brazilian Trade Ministry. 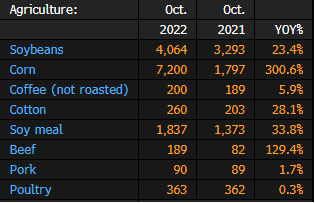 India’s Southern States to Get Above-Normal Rains in November

India’s southern peninsula, including parts of Tamil Nadu, Karnataka and Andhra Pradesh, is expected to receive above-normal rains in November, according to the country’s weather bureau.

CBH Group, Australia’s biggest grain exporter, will invest A$4 billion ($2.6b) over the next 10 years to help increase its exports, the company said on Wednesday.

The Purdue University/CME Group’s agricultural sentiment index fell to 102 points in Oct. from 112 in Sept., according to a survey of 400 agricultural producers. 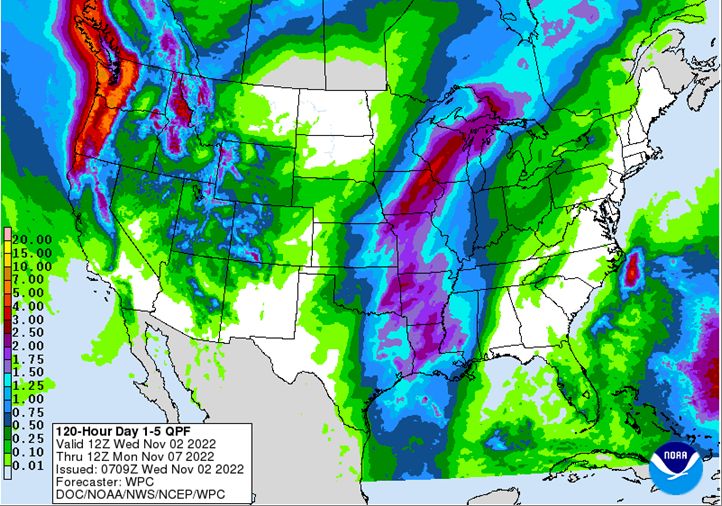 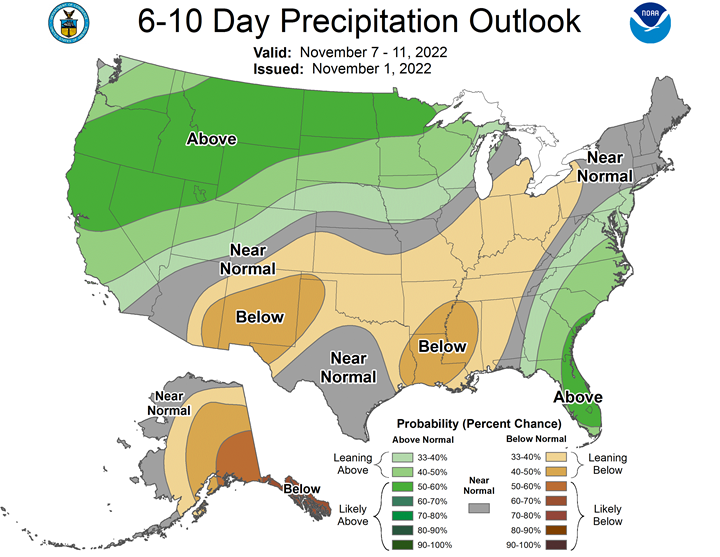 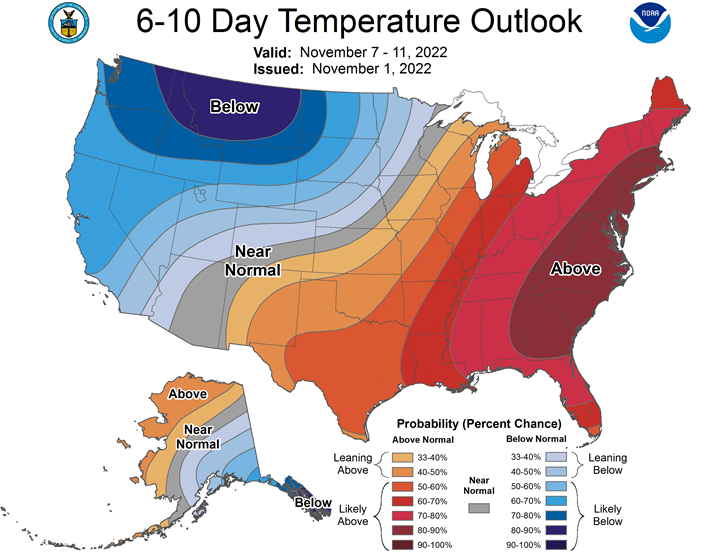 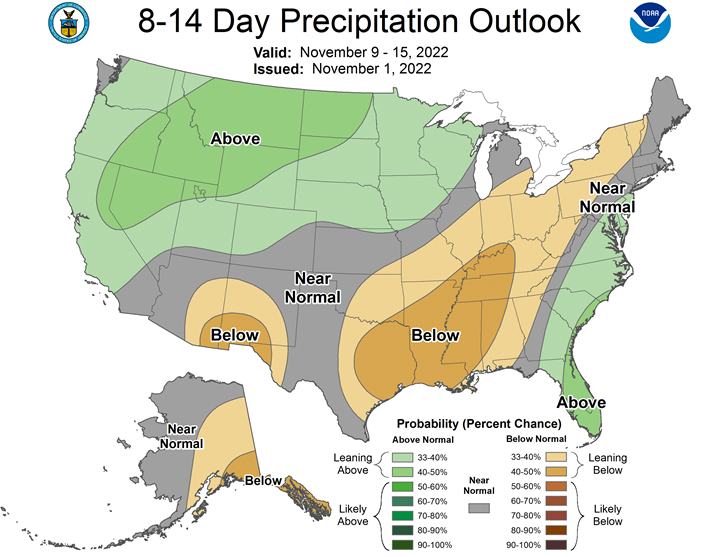 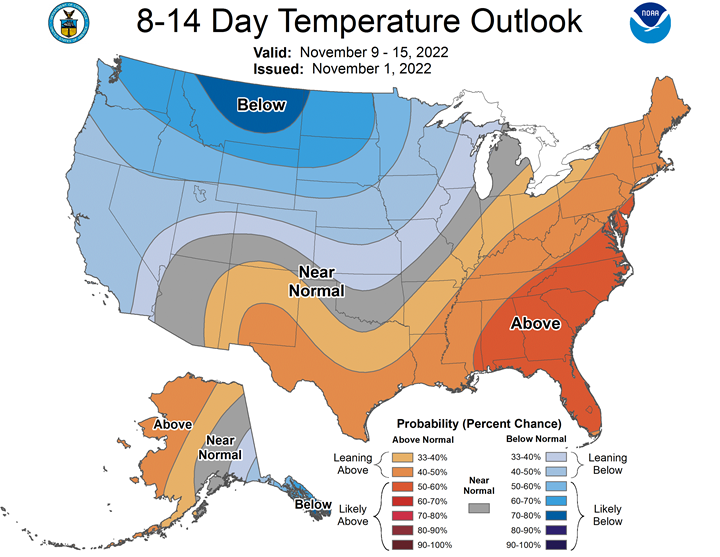 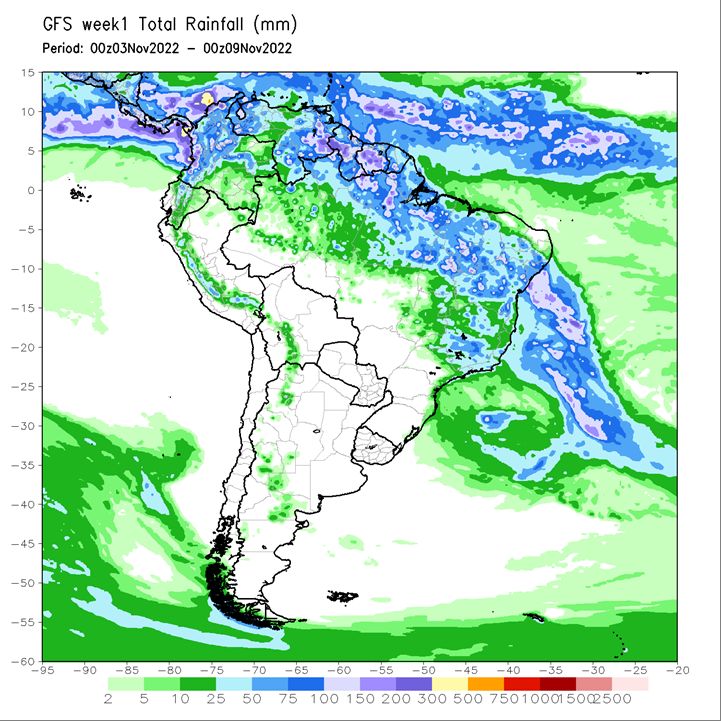 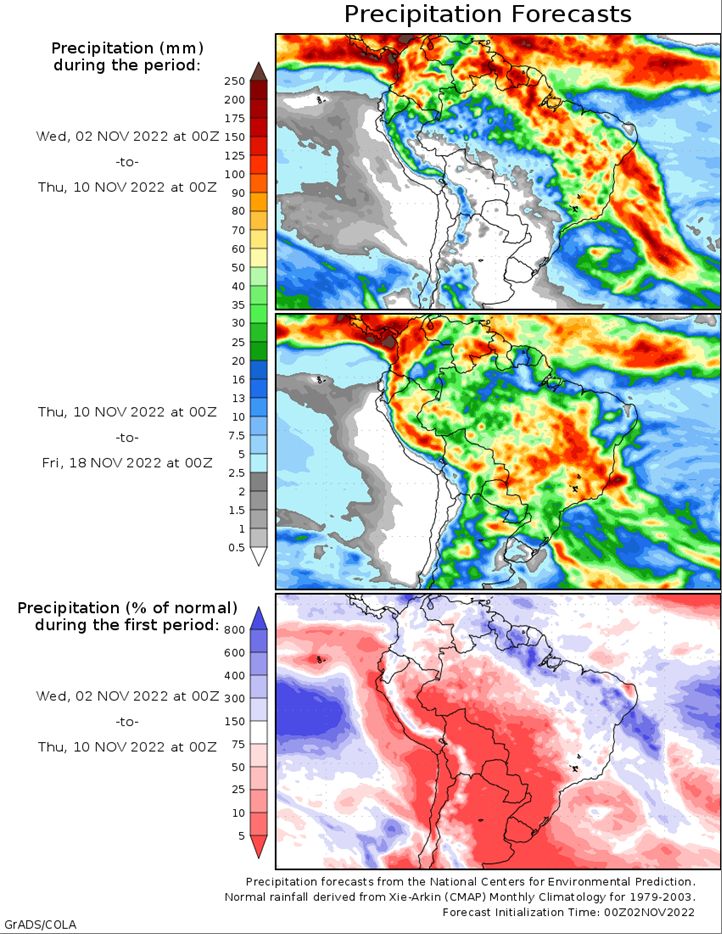 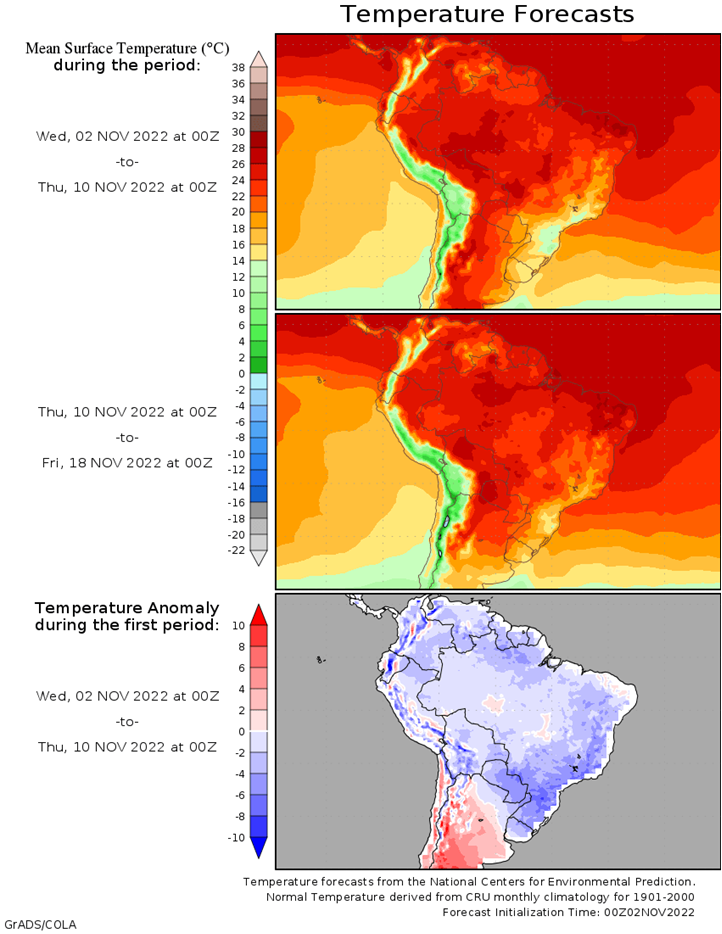 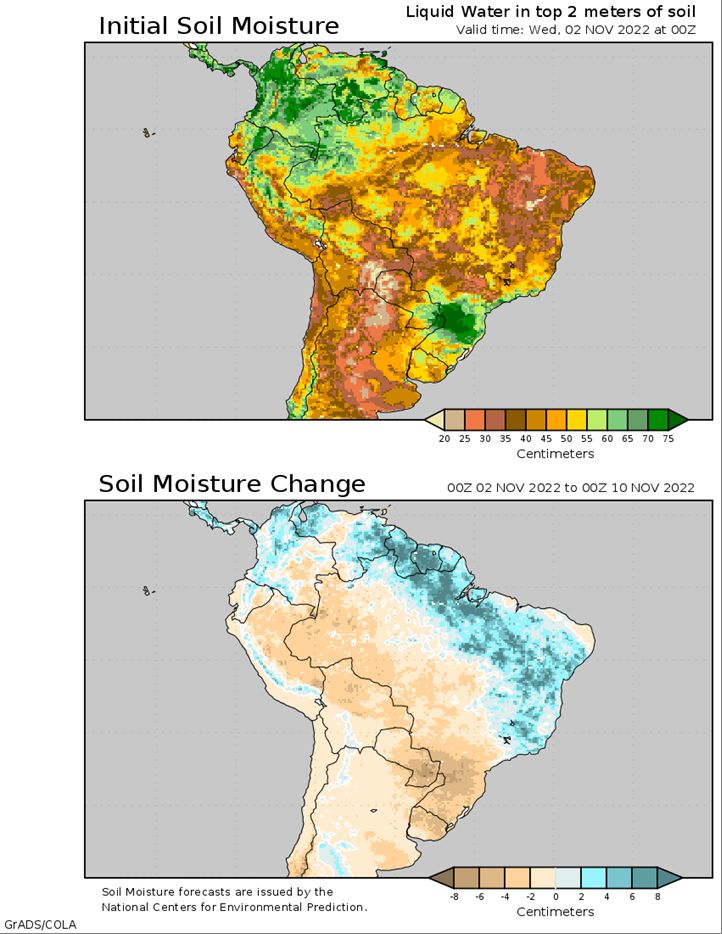