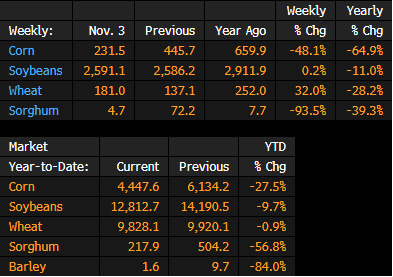 US Crop Progress and Conditions for Nov. 6: Summary 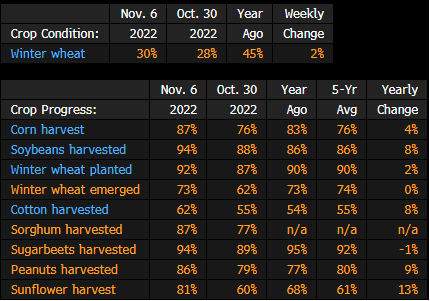 U.S. farmers are likely to expand plantings of corn and wheat while reducing seedings of soybeans for the upcoming marketing year, the U.S. Agriculture Department said on Monday.

The USDA forecast that farmers will seed 92.0 million acres of corn this spring for the 2023/24 crop year, up from 88.6 million in 2022/23. Corn is planted in April and May in the United States, the world’s biggest exporter.

The USDA’s preliminary “baseline” projections , based on conditions as of October and generally used for budgeting, come at a time of tightened world grain supplies due to drought in key production areas as well as war in Ukraine that has disrupted shipments from the Black Sea.

The USDA projected total U.S. wheat plantings for 2023/24 at 47.5 million acres, up from 45.7 million acres in 2022/23. Roughly 70% of U.S. wheat acres are seeded to winter wheat each autumn, with the remainder planted the following spring. U.S. farmers have nearly finished planting winter wheat for the 2023/24 marketing year.

The crop projections issued on Monday are part of the USDA’s annual 10-year outlook for the agricultural sector. The government will release a complete report on its outlook to the year 2032 in February. The USDA typically releases its first official plantings forecasts based on a survey of farmers in late March.

Russian wheat exports in the 2022-23 season are now seen at 43.7m tons, up 0.3m tons from a prior outlook, due to the current “rapid” pace, analyst SovEcon says in an emailed note.

This compares with 46% a week earlier, and 67% a year before, according to an emailed report from consulting firm AgRural.

Some 10.07 million tons of grain and foodstuffs have departed Ukrainian ports since the corridor began operating in early August, the Joint Coordination Centre that facilitates the Ukraine grain-export deal said late Sunday. More than 40% of the total amount has been corn and 28% has been wheat, data show.

Vessel inspections sped up dramatically for a couple of days last week after Russia temporarily withdrew from the grains deal — pulling out its own inspectors — but have slowed again since Moscow returned.

Only two outbound cargoes over the weekend were cleared in Istanbul, where they are required to be checked, with others being halted for fumigation issues and “various grounds,” the JCC said. That compares with more than 80 outbound cargoes that cleared last Monday and Tuesday.

It remains unclear if the crop corridor will be extended beyond Nov. 19, when the initial deal comes up for renewal. Inbound vessels continue to head into Ukraine, the JCC said, meaning more exports are likely in coming days.

Ukrainian ports have resumed receiving grain after the temporary disruption to the crop-export deal last week, but at “very slow pace,” analyst UkrAgroConsult said in a report.

Eight inbound ships transited the Ukraine crop corridor on Monday, heading to ports for loading under the Black Sea Grain Initiative, according to a statement from the Joint Coordination Centre that facilitates the pact.

The following table shows results of a Bloomberg News survey of as many as eight analysts for Brazil’s soybean and corn crops. Conab, the Brazilian national supply company, is scheduled to release its latest estimates on Nov. 9 at 9am local time.

WHEAT/CEPEA: Harvesting advances in RS and presses down quotations; production decreases by 40% in AR

The progress of the wheat harvesting in Rio Grande do Sul is pressing down quotations in that state. Cepea collaborators reported deals for delivery in Paraná because of the higher quality of the cereal from RS.

In Paraná, 72% had been harvested by Oct. 31st. Of the crops still developing, 64% were in good conditions; 31%, in average conditions; and 5%, in bad conditions, a better scenario than that in the previous week.

The dollar depreciation against the Real reduced the import parity value, favoring imports. However, In Argentina, Brazil’s number one wheat supplier in the world, the Bolsa de Cereales (Buenos Aires Stock Exchange) revised down the national production by 1.2 million tons compared to that in the previous report, to 14 million tons. Compared to last season, whose production totaled 22.4 million tons, Argentina’s output is forecast to be 37.5% lower. Considering all wheat crops in Argentina, 54% are in bad conditions; 37%, in regular conditions; and a slight 9%, in good/excellent conditions. This scenario is worse than that in the previous week, due to frosts.

IMPORTS AND EXPORTS – According to data from Secex, Brazil imported 297.6 thousand tons of wheat in October, 20.3% less than that imported in September and 42.5% down from that in Oct/21. The average import value closed at BRL 2,187.18/ton, 4.1% lower in the monthly comparison but 42.5% higher in the annual comparison. In the last 12 months, imports totaled 5.73 million tons.

As for exports, Brazil shipped 399.58 tons of wheat last month. Between Nov/21 and Oct/22, exports totaled 3.14 million tons. And this year, 2.6 million tons have been exported.

Thanks to a mix of improving weather conditions and general seasonality, the price to move grain down the Mississippi River has fallen by about a third during the last week.

For the last several months, a severe drought in the Midwest has lowered the water levels on the Mississippi River to their worst depth since the 1980s, which had the effect of constraining the flow of barges carrying grains and other goods. As discussed on a recent episode of the Odd Lots podcast, this had caused the spot price of barge transport to explode roughly 10 times above normal levels.

However, according to Ben Scholl, president of specialty grain buyer Osterbur & Associates, a confluence of factors have pushed down the prices dramatically in just the past week. One of those factors is simply seasonality. The harvest is coming to an end, and so demand is starting to wane.

But more importantly, the area is finally starting to get some rain. According to Scholl, all the major segments of the river saw rain over the weekend and more is on the horizon. There’s also a tropical storm coming up to Florida that could possibly result in more rain in the Midwest, depending on its ultimate trajectory.

Greater water depth allows for more goods to be put in barges, pushing them deeper into the water. There are also some larger towboats, which can push more barges, that had been put out of commission due to their depth, and the rain may allow for more these boats to come back into the rotation.

Barge pricing is quoted as a percentage of the so-called tariff. The tariff from St. Louis to New Orleans is $3.99 and the spot rate on Friday, Oct. 28 was 2,200%, meaning $87.78 per short ton of grain, according to quotes that Scholl has received.

This is still well above normal pricing, which is usually below $20 per short ton. But hopefully this is the beginning of sustained rain and an improvement in water depth.

This year’s French corn crop is now seen at 11m tons, down from an October outlook for 11.4m tons, its agriculture ministry said Tuesday in a report.

France’s sunflower seed harvest fell to around 1.7 million tonnes this year due to dry summer weather and despite a sharp rise in sowings, French oilseed technical institute Terres Inovia said on Monday.

The estimate, based on an area of over 840,000 hectares and an average yield of 2.05 tonnes per hectare (t/ha), was lower than the latest one issued by France’s agriculture ministry last month at 1.83 million tonnes, based on a yield of 2.13 t/ha.

The institute stressed that despite the fall from last year the harvest remained above the five-year average of 1.5 million tonnes.

“This production will enable the industrial units to crush even more French sunflower seeds and ensure better supplies of oil and meal needs,” it said. 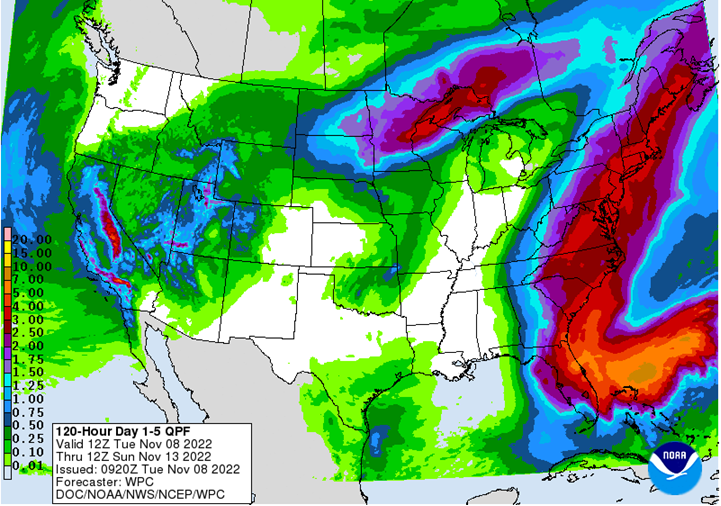 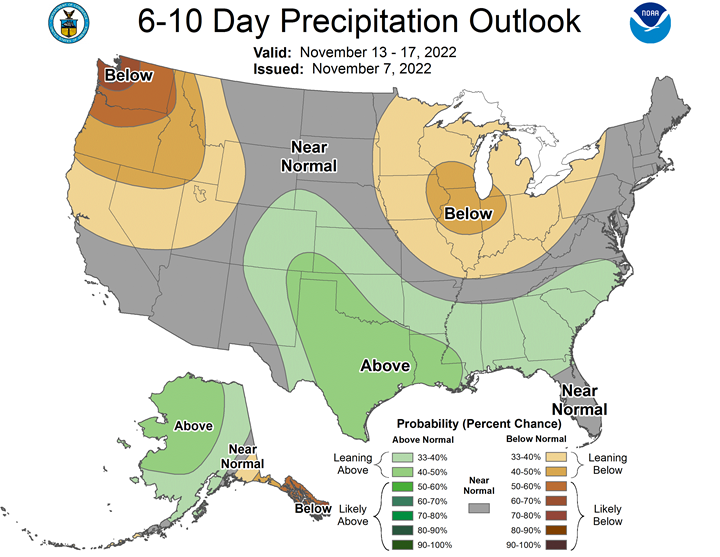 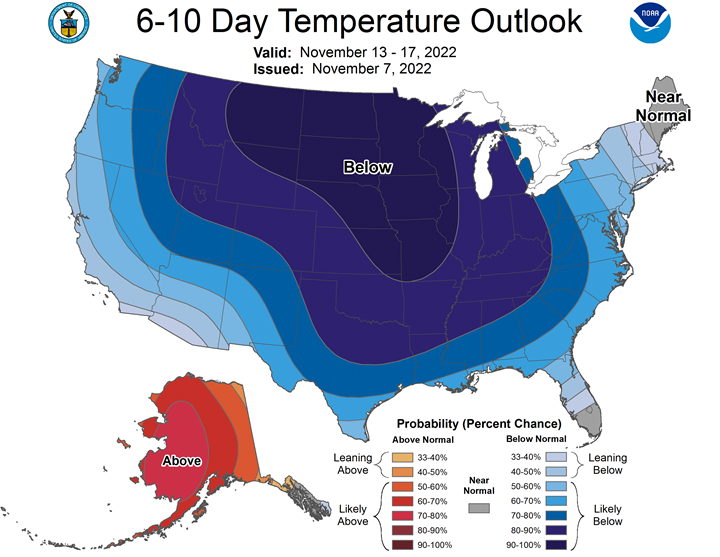 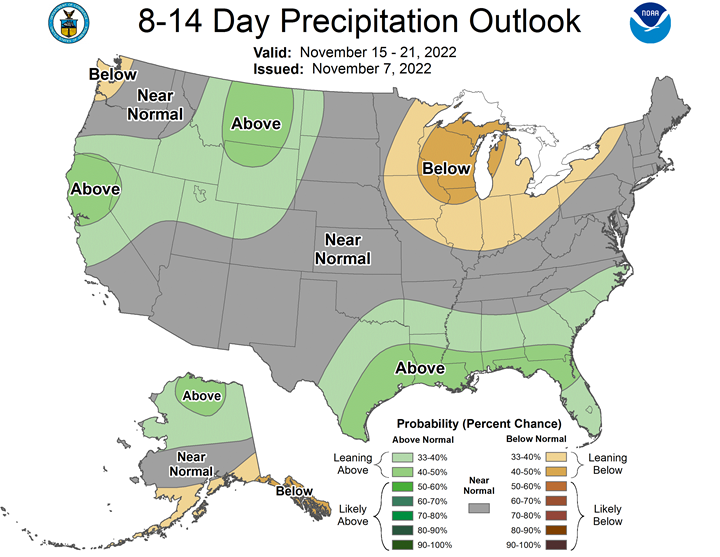 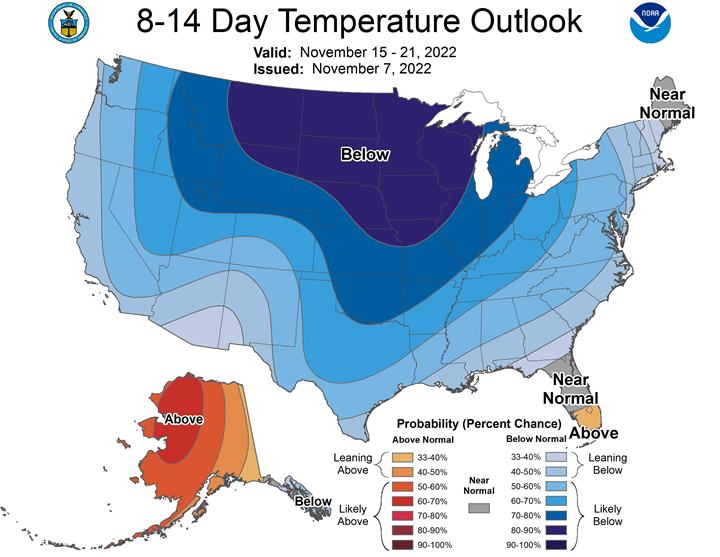 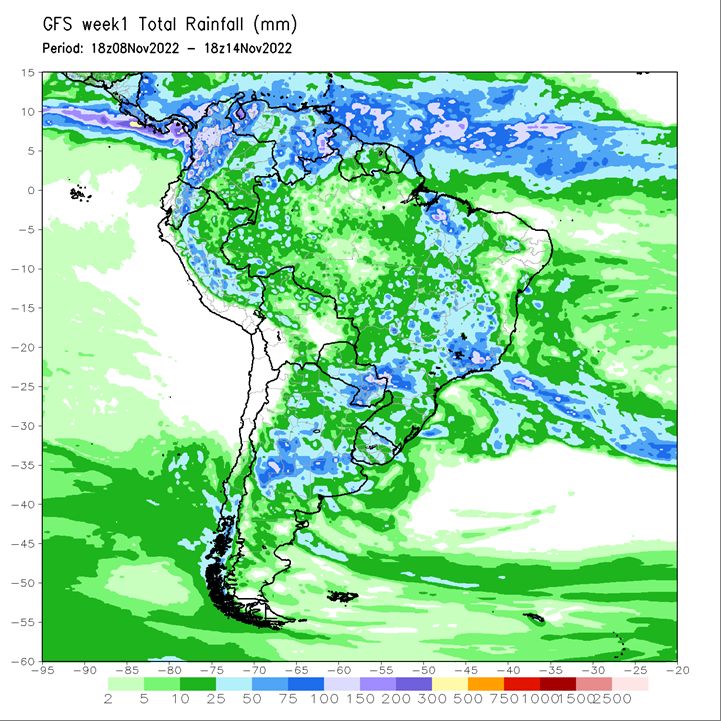 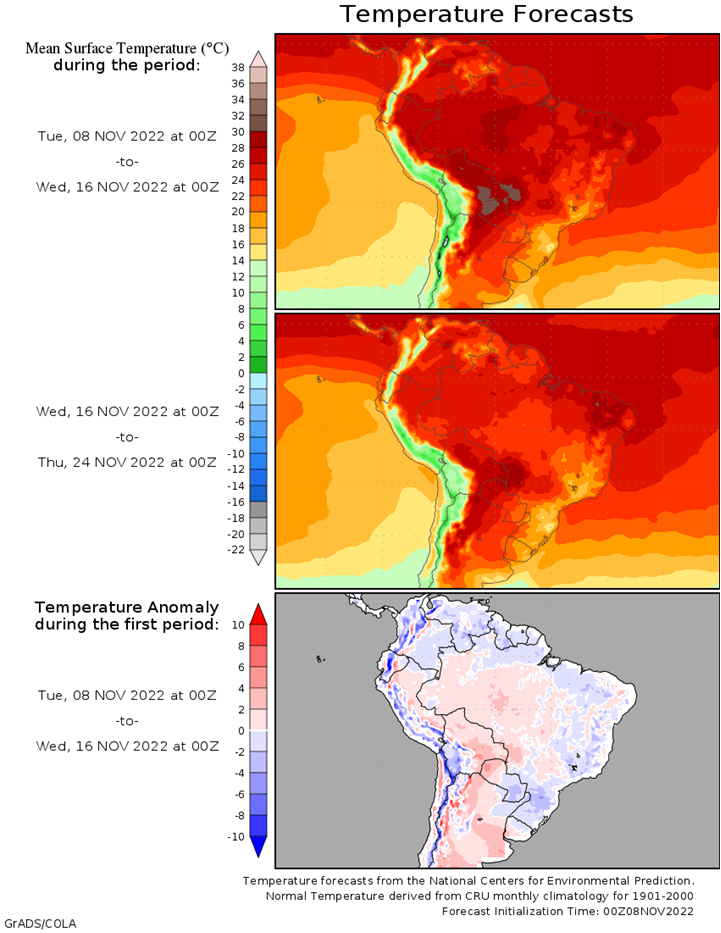