Northern Plains Forecast: Heavy snow is falling in the Northern Plains on Thursday morning which will continue into Friday morning before clearing out. Some areas are likely to see over 12 inches of accumulation in the Dakotas. With strong winds developing, blizzard conditions will be possible Thursday into Friday. Very cold air is moving in behind the system, lasting through next week with a couple of reinforcing shots of arctic air and some light snow.

Central/Southern Plains Forecast: A strong storm system to the north is sweeping a cold front through the Central and Southern Plains Thursday. A line of showers is moving through with the front but is weak as drought continues to build across western areas. Gusty winds are coming with the system as well, which continues to dry out soils. Much colder air follows the system, with colder air lasting through next week. This could start to turn wheat dormant in poor condition. Another cold front will push through early next week with some additional showers and potential for accumulating snow across southern areas. There is some limited potential for precipitation over southwestern areas, mostly in the Texas Panhandle.

Midwest Forecast: A storm will push through Thursday and Friday with strong winds, heavier showers across the north and a push of colder air. Some snow will be possible in Minnesota. The colder air will last through next week with a couple of reinforcing shots that may also bring some showers, mostly in the form of snow.

Eastern Midwest Forecast: Isolated showers are returning to Brazil, filling into southern areas on Friday. The showers will not last long over southern areas as another front clears out the area on Monday. If showers disappoint, soil moisture in southern areas will decline, starting to impact corn and, to a lesser extent, soybeans. Showers next week may still be possible for southern areas, but unlikely. Central areas should fare better with showers continuing.

Canadian Prairies Forecast:  Isolated showers are moving back into Argentina but will be cleared out on Sunday. A long period of dryness has had a significant effect on filling wheat as well as corn and soybean planting and establishment. Showers may still go through late next week with a weaker cold front, but will likely be isolated. If showers disappoint over the next few days, the drought will likely start to damage corn and soybeans, as well as push back planting even further.

US Export Sales of Soybeans, Corn and Wheat by Country

The following table shows US export sales of soybeans, corn and wheat by biggest net buyers for week ending Nov. 3, according to data on the USDA’s website. 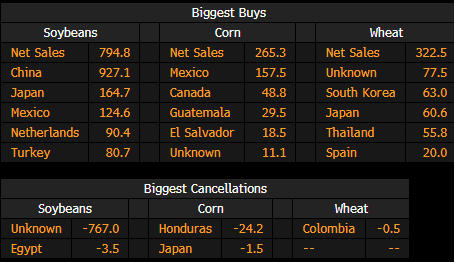 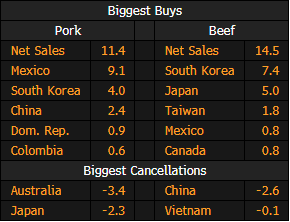 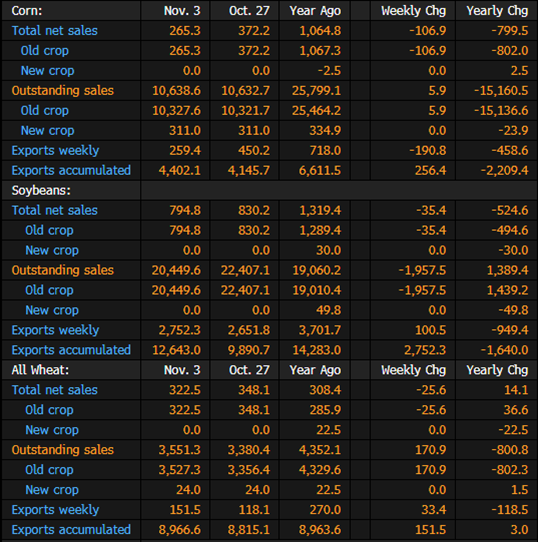 Ukraine’s grain exports shrank by 30% y/y in the current season to 14.6m tons as of Nov. 9, the country’s Agriculture Ministry says on its website.

About a Tenth of Ukraine Corn May Go Unharvested: USDA FAS

Ukraine’s corn production in the 2022-23 season is seen at 25.8 tons, below the latest official USDA forecast for 31.5m tons, the agency’s Foreign Agricultural Service says in a report.

Govt to set crude palm oil reference price at $826.58/ton for Nov. 15-30 period, higher than $770.88 a ton in the previous 15 days, Musdhalifah Machmud, deputy for food and agriculture at the Coordinating Ministry for Economic Affairs, says in text messages.

Nine Indonesian firms to sell 2.5m tons of CPO and palm oil products to Chinese buyers, says the Indonesian trade ministry in a statement on Friday.

After frosts compounded a drought, the upcoming wheat harvest is seen at just 11.8m metric tons compared with 13.7m tons in October, the Rosario Board of Trade said in a monthly report.

Food imports costs across the world are on course to hit a near $2 trillion record in 2022, piling pressure on the globe’s poorest countries who likely shipped in considerably less volumes of food, the U.N. Food Agency said on Friday.

World food prices soared to record levels in March after Russia invaded Ukraine, a key grains and oilseeds producer, and while they have since retreated somewhat, they remain above last year’s lofty levels.

The increase is disproportionately affecting economically vulnerable countries, and is expected to continue doing so next year even as the overall agricultural supply situation is set to improve a bit.

“These are alarming signs from a food security perspective,” the Food and Agriculture Organization (FAO) said its twice-yearly Food Outlook report.

The world’s food import bill is projected to reach $1.94 trillion this year, up 10% year-on-year and higher than previously expected, the FAO said.

“Importers are finding it difficult to finance rising international costs, potentially heralding an end of their resilience to higher international prices,” the FAO said.

In terms of agricultural inputs like fertilisers, which require a lot of energy to produce, the FAO said global import costs are set to rise nearly 50% this year to $424 billion, forcing some countries to buy and use less.

This will inevitably lead to lower productivity, lower domestic food availability and “negative repercussions for global agricultural output and food security” in 2023, it said.

Looking to the 2022/23 season, the agency sees wheat production jumping 0.6% year-on-year to hit a record 784 million tonnes, but notes increases are expected mostly in China and Russia, leaving inventories down 8% in the rest of the world.

Production of coarse grains like corn, barley and sorghum is meanwhile seen falling 2.8% in the season.

On the plus side, however, the FAO said oilseeds output is seen rebounding 4.2% to hit an all time high, sugar output is seen rising 2.6%, while rice output is expected to remain at overall average levels thanks to resilient plantings in Asia and recovering output in Africa.

A Republican U.S. senator plans to submit federal legislation with the support of a major oil industry trade group that would expand national sales of E15, a higher ethanol-gasoline blend.

Senator Deb Fischer, of Nebraska, the third-largest U.S. corn-producing state, told Reuters on Thursday she believes there is a path forward for year-round sales of E15, which has been opposed in the past by some oil and environmental groups.

Fischer said she would provide more details of the proposed legislation in the coming weeks. If the bill passed, it would be a win for U.S. corn farmers and the ethanol industry. Ethanol in the United States is made largely from corn.

One of the oil industry’s top trade groups, the American Petroleum Institute (API), and the Renewable Fuels Association earlier this year began discussions to seek a nationwide expansion of E15, according to an industry source familiar with the matter.

“A state-by-state approach would create a boutique fuel market in the Midwest and may negatively impact the reliability of gasoline supply to the region,” said Will Hupman, API’s vice president of downstream policy.

“We urge Congress to pass legislation that allows for the year-round sale of E15 nationwide, cancels the pending requests from the Midwest states, and preserves access to lower ethanol gasoline blends,” said Hupman.

The EPA effectively restricts summertime sales of E15 over concerns that it contributes to smog in hot weather, though research has since shown the higher percentage blend may not increase smog relative to the 10% blend called E10 that is now sold year-round.

The bill would represent just the latest push to win nationwide, year-round sales. A federal appeals court last year struck down the Trump’s administration approval of year-round E15 sales, arguing it did not have the authority. That decision had been sparked by a challenge from the oil refining industry.

Wheat prices in China jumped to a record high despite the summer’s bumper harvest as wheat farmers wait for higher prices while pandemic control has hindered logistics, resulting in a limited supply.

After summer, the price of one jin or half a kilogram of wheat rose by CNY0.2 to a new high of CNY1.65 (up by US 3 cents to US 20 cents) in most regions from previous years, Wang Han, a wheat farmer in Anhui province, said to Yicai Global. Summer grain harvest usually ends in June or July.

However, the yield rose above the usual as one mu of land (0.7 hectares) generated over 50 kg more harvest, Wang added.

The situation defies the expected market dynamics as prices surged despite stable demand and added output. This is mostly caused by a tighter short-term supply of wheat, Cao Hui, analyst at the Ministry of Agriculture and Rural Affairs, said to Yicai Global.

Demand tends to pick up at this time of year as flour mills usually acquire more wheat as temperatures drop, but many Chinese farmers remained relatively reluctant to sell wheat as they expect to receive a higher price later, Cao said. Moreover, supply is lower than demand since farmers are now busy with autumn harvest and planting while Covid-19 restrictions affect regional logistics.

Moreover, feed processors have had to seek alternatives to corn in the past two years amid skyrocketing corn prices, as a large amount of wheat has been used for fodder, Lin explained.

The consequences of the Russia-Ukraine conflict have also affected price expectations in the Chinese market to some extent in the short term.

Still, international price swings are not likely to have a significant impact on the domestic wheat market, Lin Guofa, research director at Bric’s agriproduct bulk trade platform, told Yicai Global. Since 2000, there have been three global rounds of wheat price surges, but none of them had such a big effect on China, Lin added.

Imports are only a drop in the bucket compared to domestic output. Last year, China imported 9.7 million tons of wheat, accounting for 7 percent of the domestic total, according to customs data.

The increase in farmland values in the third-quarter from year-ago levels marks the fourth straight quarter of gains of at least 20%, according to the Agricultural Newsletter from the Federal Reserve Bank of Chicago.

US Crops in Drought Area for Week Ending Nov. 8 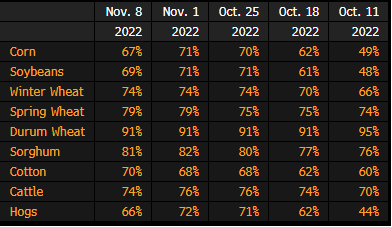 US Barge Rates on the Mississippi River Fell 49% W/w: USDA

Barge prices at St. Louis for shipping grains along the Mississippi River sunk to $40.73 per short ton in the week ending Nov. 8 from $80.11 the previous week, according to data in the USDA’s weekly transportation report. 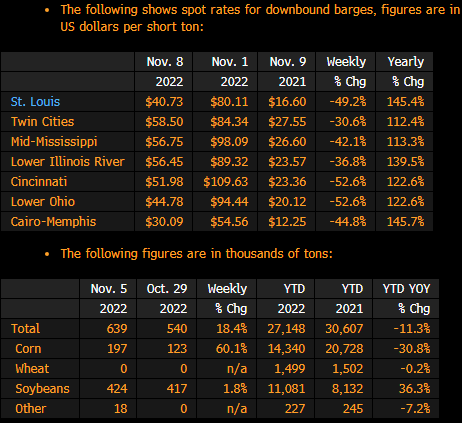 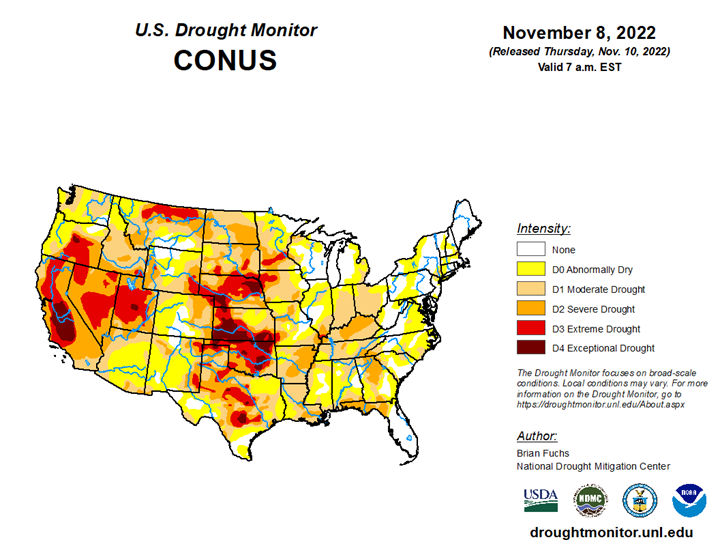 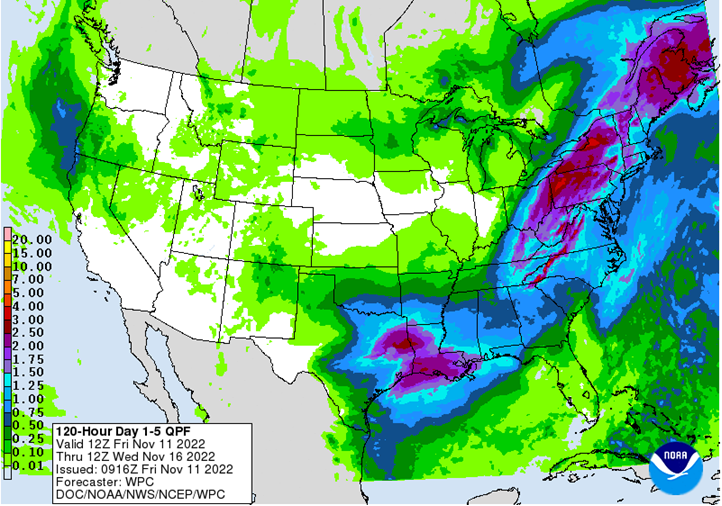 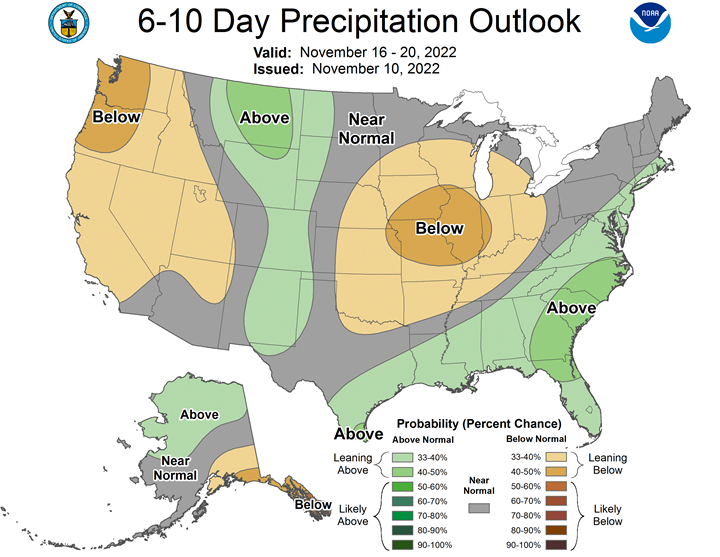 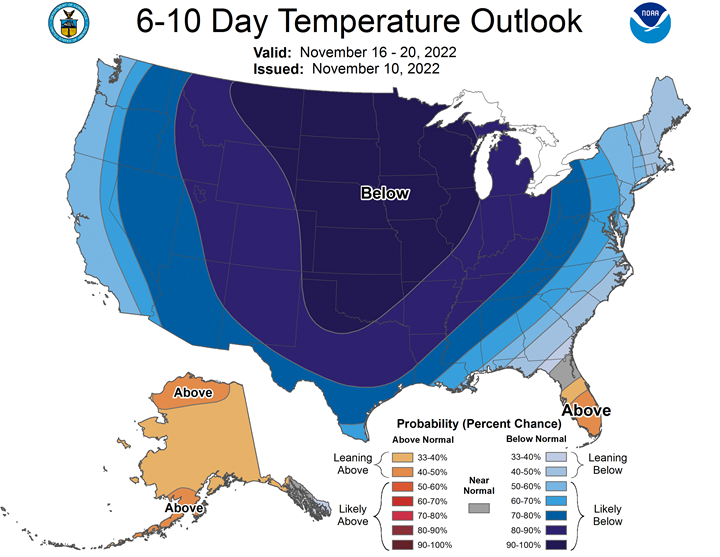 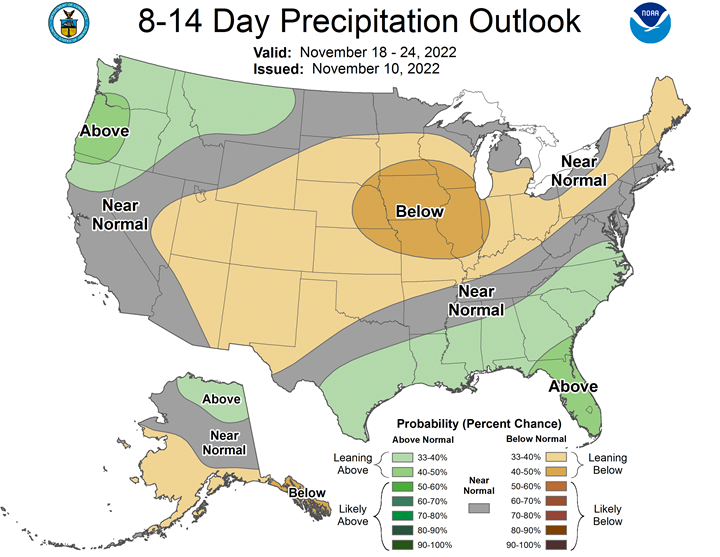 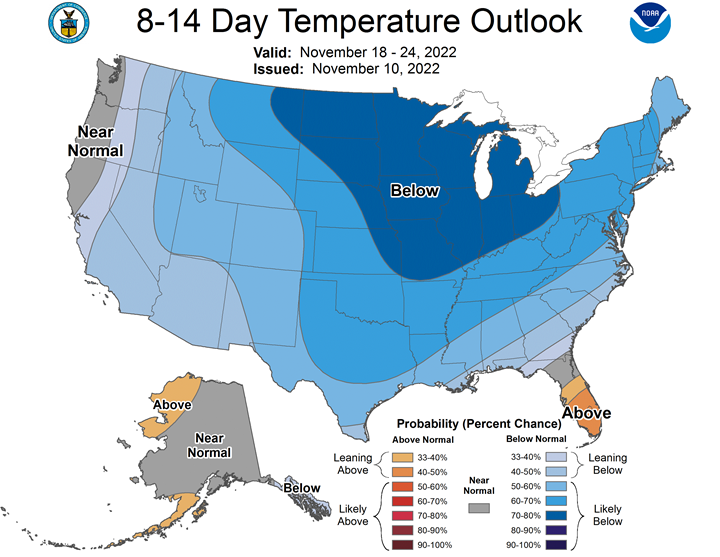 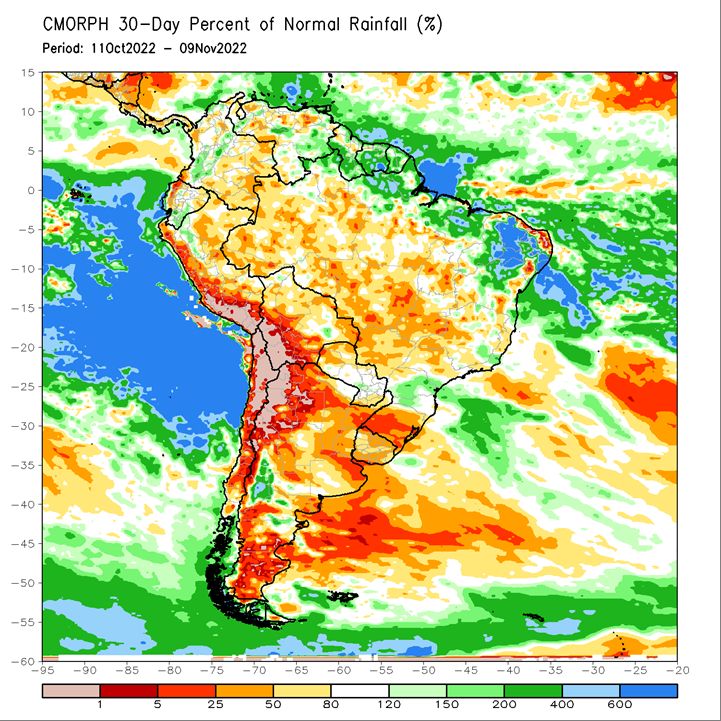 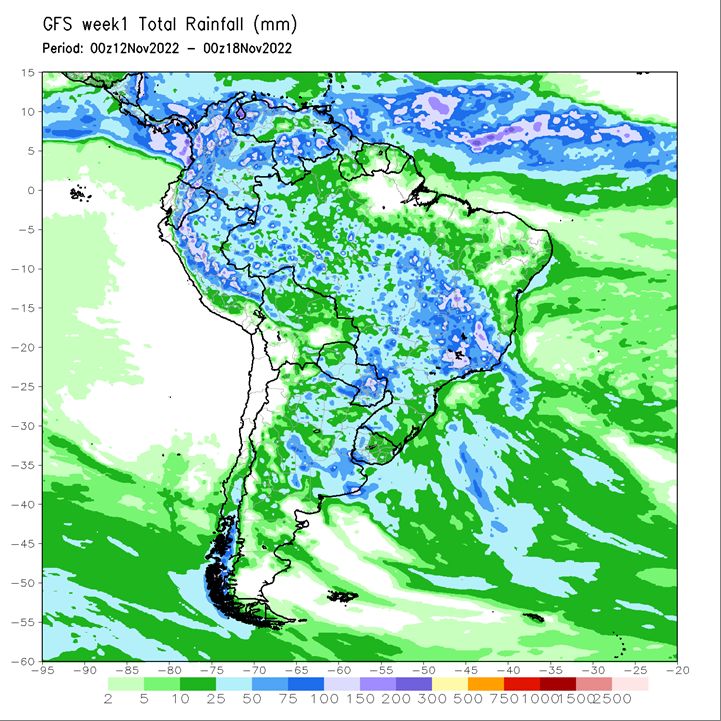 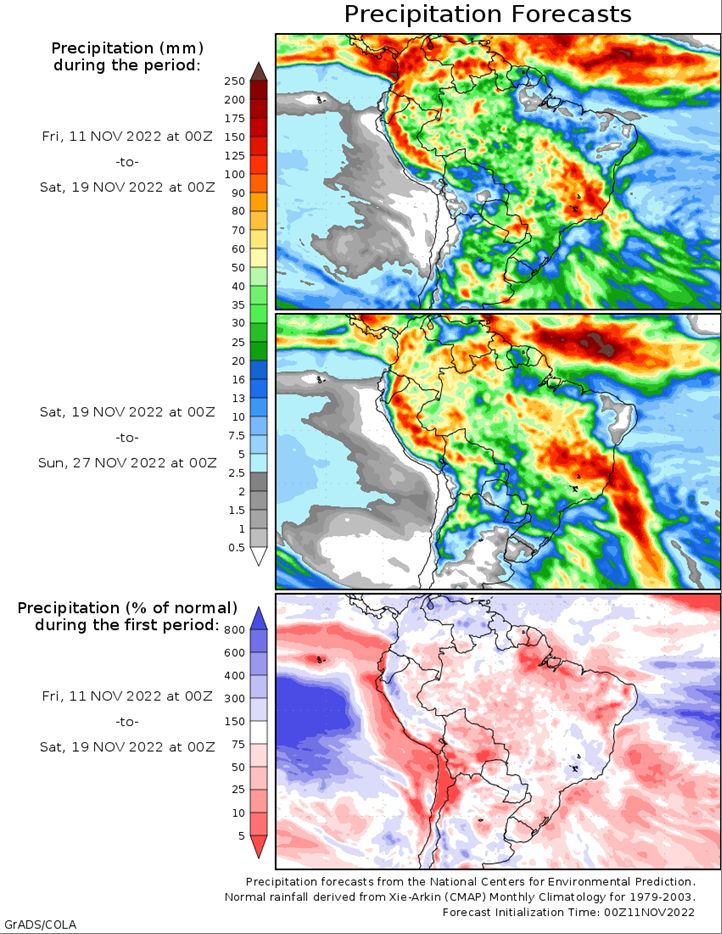 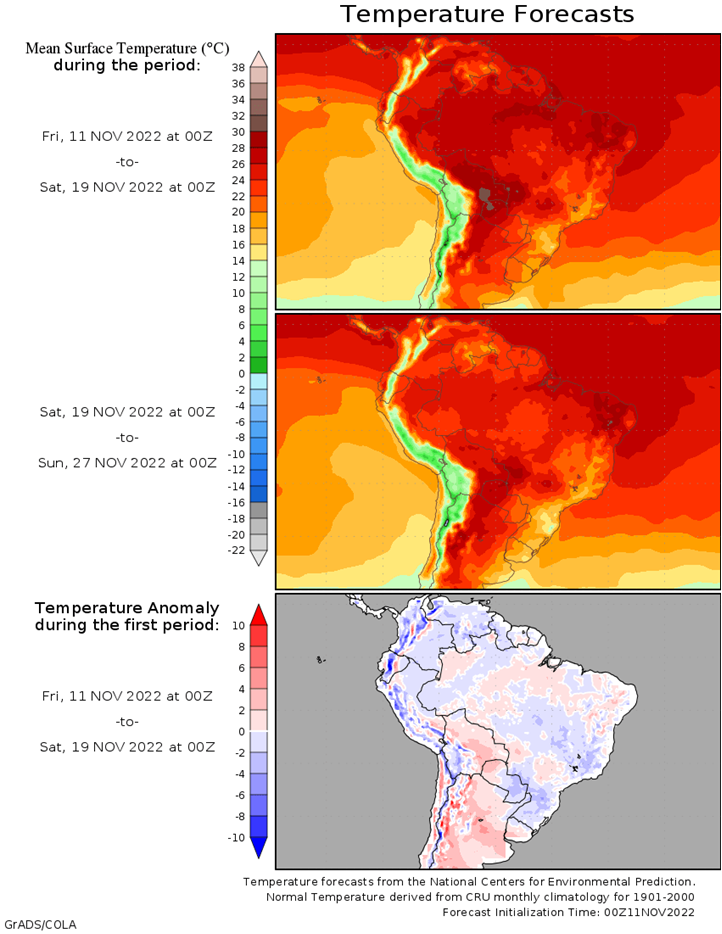