Western Midwest Forecast: Mostly dry through Wednesday. Scattered showers Thursday, south Friday. Temperatures near to below normal Tuesday, near to above normal Wednesday-Friday.

US Crop Progress and Conditions for Nov. 20: Summary 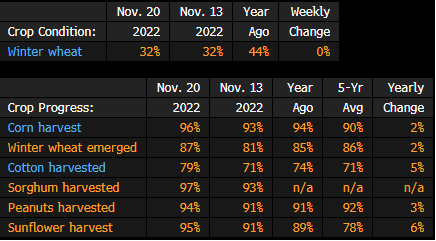 In week ending Nov. 17, according to the USDA’s weekly inspections report. 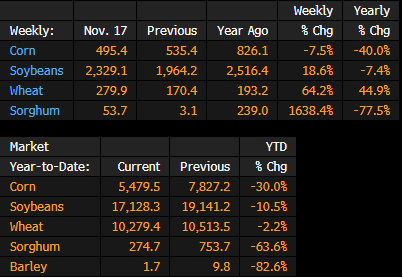 Following is a summary of USDA inspections for week ending Nov. 17 of corn, soybeans and wheat for export, from the Grain Inspection, Packers and Stockyards Administration, known as GIPSA.

In most of Europe, the Oct. 1-Nov. 10 period was the warmest in data going back to 1991, the EU’s Monitoring Agricultural Resources unit said Monday in a note.

Compares with 69% a week earlier, and 86% a year before, according to an emailed report from consulting firm AgRural.

Ukraine has sown winter grains, mainly wheat, across 4.4m hectares, or 94% of the planting area, the Agriculture Ministry said on its website.

India’s ethanol production will reach a record 4.5 billion liters (1.2 billion gallons) next year as the government sets more ambitious gasoline blending targets, according to Pedro Arruda, an economist at the International Sugar Organization.

Truckers and other demonstrators protesting the electoral defeat of President Jair Bolsonaro are hampering the transport of corn in Mato Grasso state, the heart of Brazil’s farm country, two farmers said on Monday.

The protests have hampered transport of some corn from farmers to ports and storage facilities, but the quantities could not be determined. The slowdown could have knock-on effects as warehouses need to be emptied ahead of a January soy harvest.

The blockades are also delaying deliveries of farm inputs needed for planting of Brazil’s second corn crop early next year, he added.

While farmer Cayron Giacomelli supports the protesters’ cause, he said the blockades have prevented him from moving his corn, and he will not receive payment until he delivers it.

“We give full support to protesters, but we are being harmed,” Giacomelli said.

Brazil’s farmers have been a key constituency for Bolsonaro, but not all back continued demonstrations.

At the southern port of Paranagua in Parana state, a blockade on an access road that backed up trucks on Sunday night was lifted on Monday, according to a port agent and an association representing firms that operate at Paranagua.

They said that there was little disruption to the flow of goods. Authorities are also trying to curtail demonstrations in the states of Santa Catarina, Para and Rondonia.

Farmer Endrigo Dalcin said there was little corn and soybeans left to move in Mato Grosso but said storage of the next soy crop may be complicated if protests continue.

– Brazil’s National Energy Policy Council (CNPE) decided the mandatory blend of biodiesel in diesel will be kept at 10% until Mar. 31, 2023, the Mines and Energy Ministry said on Monday.

From April on, the mix requirement will be increased to 15%, the ministry said in a statement, pointing out that Brazil’s next government which takes office in January could change the decision.

CNPE also decided that biodiesel produced by “any technological route of production” may be part of the mixture, which could include Petrobras’ PETR4.SA R5 diesel, a fuel co-processed with vegetable oil in a 95%-5% ratio.

Brazil’s oil, gas and biofuel regulator ANP would first have to approve the biodiesel used in the blend.

Around 70% of the country’s biodiesel is produced from soy oil, which is obtained after grain crushers process the beans.

With a 15% mandate being adopted as of April, the total soybean demanded for biodiesel would rise to about 30 million tonnes in 2023.

The decisions sparked protests from biodiesel producers, as Petrobras’ R5 could be a competitor, hurting the biofuel industry which says it should not be eligible for blending.

Petrobras did not comment immediately, but has previously said its product is efficient, reduces emissions because it has renewable content and has a chemical composition similar to diesel derived from petroleum.

Tokarski also said he is confident that Brazil can adopt a 15% mandate in April, but that ideally the change will not be so abrupt.

For Francisco Turra, chairman of the board at producers association Aprobio, keeping the mandate at 10% and allowing the use of co-processed diesel for blending could represent “a death blow to the entire sector and to the entire biodiesel production chain”.

“The unlikely inclusion of co-processed diesel is another issue that lacks technical support, since the regulator ANP itself does not consider the product a biofuel,” Turra said.

A group of oil, renewable fuel and farm trade organizations have joined together for the first time to voice support for U.S. legislation that would expand nationwide of E15, a higher ethanol-gasoline blend, according to a letter from the group.

Organizations including the American Petroleum Institute (API), Renewable Fuels Association and the National Farmers Union wrote to congressional leaders to urge them to adopt legislation that would effectively lift restrictions on E15 sales.

API’s support is a win for the biofuel and farm groups because the oil industry has at times resisted efforts to expand the market for ethanol.

U.S. Environmental Protection Agency (EPA) anti-smog regulations restrict summertime sales of E15, even though research has shown the higher percentage blend may not increase smog relative to the 10% blend called E10 that is now sold year-round.

Reuters reported this month that API began cooperating with the biofuels trade group after governors from major corn-producing Midwestern states requested the EPA allow for expanded sales of E15 in their states. The governors’ proposal raised oil industry concerns about fuel regulations differing from state to state.

“By ensuring uniformity across the nation’s fuel supply chain, federal legislation will provide more flexibility and result in more consistent outcomes than a state-by-state regulatory landscape,” the groups said in a letter dated Monday.

Expanding national sales of E15 would also resolve long-standing differences among the groups about the fuel regulations, the letter said. 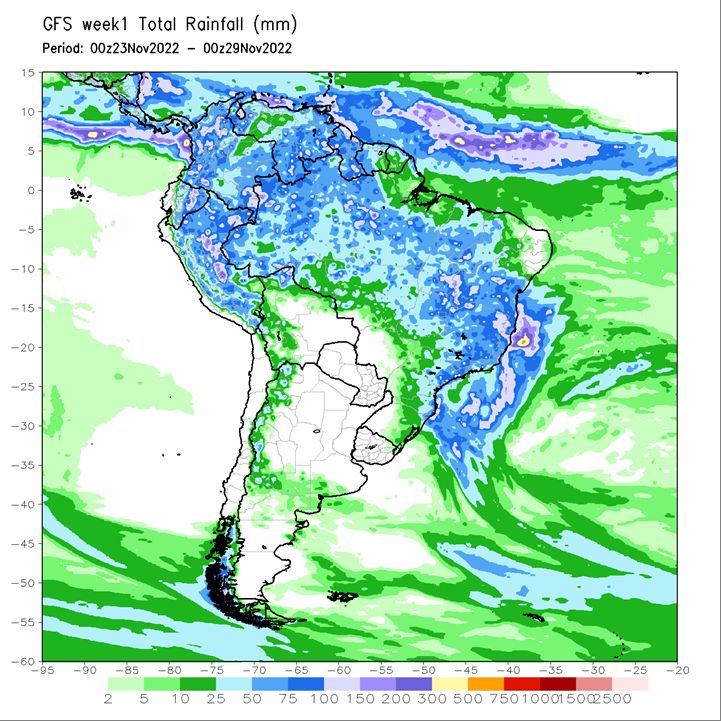 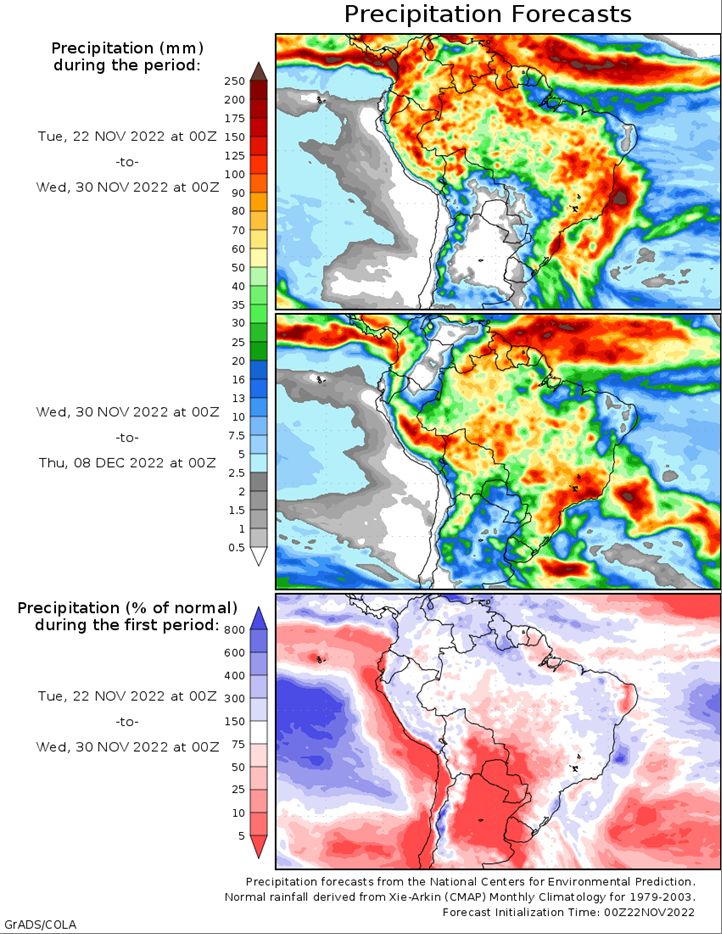 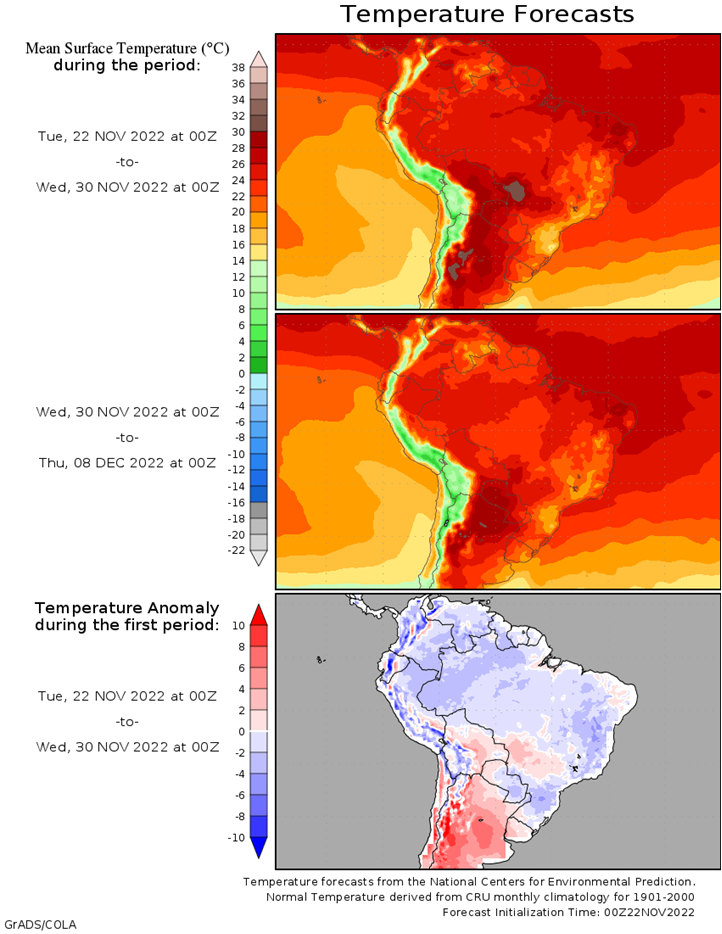 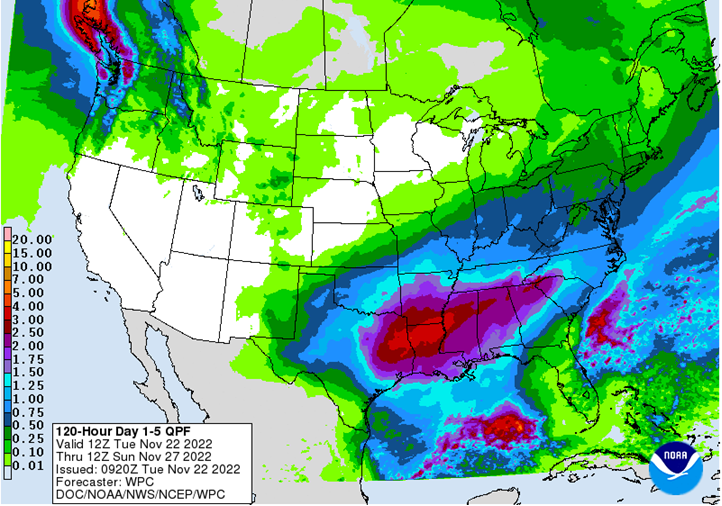 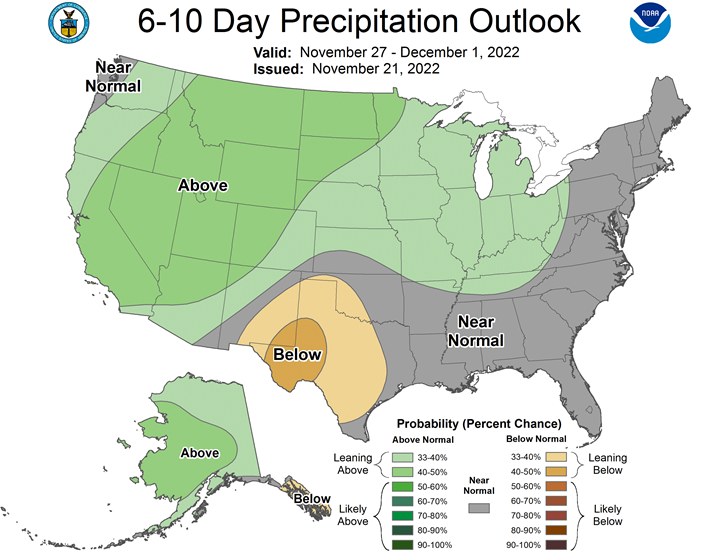 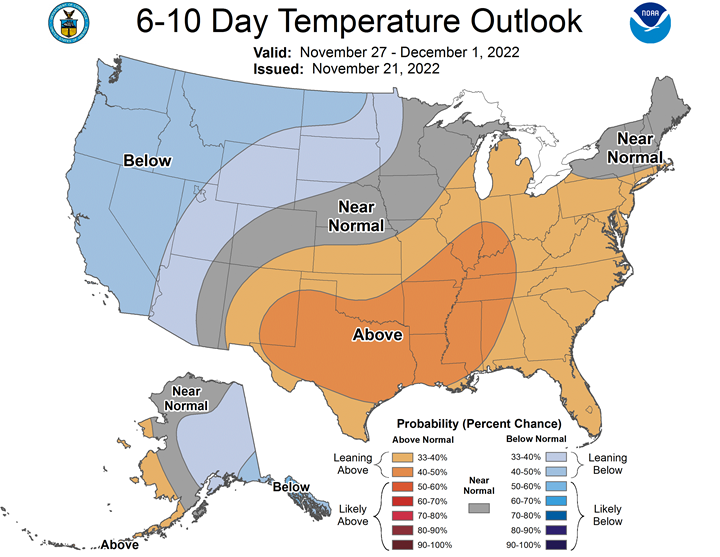 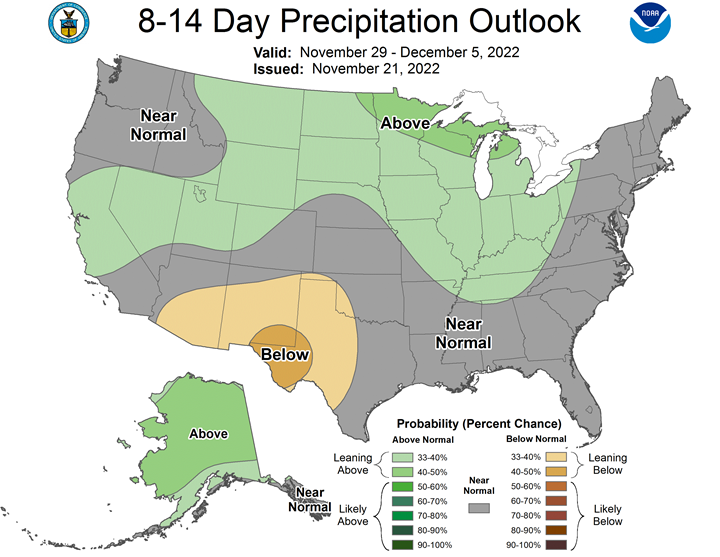 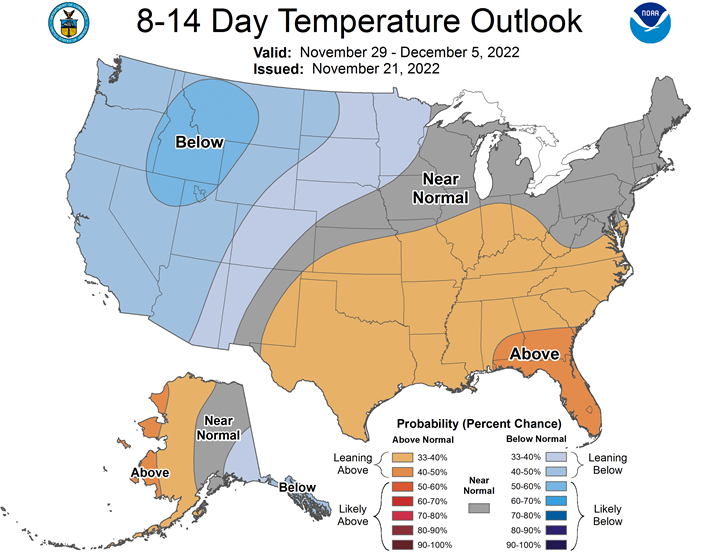