Corn finishes lower on the day, but maintains small gains on the week.

The corn market had a very quiet week overall, improving just 3/4 of a cent from last Friday’s close. In the last two weeks, the corn market has continued to hang around the 370 mark. December corn finished 1 cent lower today at 371-1/2. Prices traded in a modest 9-cent range for the week. July futures settled at 396-1/2, up 1-1/4 on the week. It’s no surprise after such a quiet week in price movement that volume in the corn market this week was very low. This week’s volume of just over 700,000 traded contracts is the second smallest number of weekly contracts traded since the first week of July for the December 2019 contract.

The market now looks forward to Monday’s USDA September Grain Stocks report. According to Reuters pre-report survey, the trade is expecting 2.428 billion bushels of on and off-farm supplies of corn. This estimate comes in higher than the 2018 September USDA stocks number of 2.14 billion. NOAA has below normal temperatures predicted in the 8-14 day outlook in the Dakotas and northern corn belt. As this late planted crop attempts to make it to black layer below normal temperatures will not help. Continued strength in the US dollar will put pressure on exports. After backing off in recent weeks the dollar has rallied up near its previous highs in the last couple of days.

Soybeans finish the day lower, but hold onto a positive week.

November soybeans finished today down 5-1/2 cents at 883 even. This was up 1/4 cent for the week following last week’s losses of 16 cents. July futures finished at 929-1/2, up 3/4 of a cent on the week. Today the USDA announced the sale of 126,000 tons of soybeans to China for delivery in 2019-2020. That comes to a total of 1.56 million tons (57.3 million bushels) in the last two weeks bought by China. Estimates for Monday’s USDA Grain Stocks report come in around 982 million bushels. This would be up from last year’s stocks number of 438 million and larger than the all-time high September soybean stocks number of 574 million in 2007.

Along with Monday’s report, the trade continues to watch the weather in South America. Brazil’s largest producing state of Mato Grosso is expected to receive rain next week, which should improve soil conditions. South American famers have delayed plantings due to dry conditions. Next week’s forecasted moisture should help to move along planting progress in the coming weeks. The two-week NOAA weather outlook for the US suggests above normal precipitation across the heart of the country. This could be a developing issue as soybean harvest begins to get underway across the Midwest.

Wheat closes mixed on the day, higher on the week.

Follow-through from last week’s gains continued this week across two of the three wheat classes. For the week, Chicago December gained 3 cents, KC was unchanged, while Minneapolis led the way higher with a weekly gain of 22-3/4 cents. December Minneapolis wheat closed at its highest level since mid July. Excess moisture, harvest delays and major quality concerns have been the driving factors behind the 60-cent plus rally. This week the EU increased their wheat production estimate to 145 million tons from 142.7 million previous and up from last year’s 128.8 million tons. In the US, expectations are for fewer winter wheat acres given current prices and late crops. World wheat stocks remain ample.

Cheese Prices Find Support Up 4.75 cents on the Day

Cheese buyers seem to have finally returned to the market to break the losing streak in the cheese markets. Bidding up blocks and barrels on the day. Block prices rose 5.25 cents and barrels rose 4.25 cents to bring the block/barrel average to $1.805/lb. It is supportive to see cheese back above the psychological level of $1.80/lb. Whey prices are saw a large amount of volume with 15 of this weeks 19 loads trading today and took why prices up 0.75 cents. Powder finished the week at the highs of the year up 0.25 cents to $1.11/lb. Butter remained unchanged on the day.

Class III futures were able to push back above the break out point of $18.00 in the October contract settling the week at $18.15. It is a good sign that the market was able to find support at this level. The spread in between October and November is almost negligible with November finishing at $18.14. Despite the moves higher in powder and butter this week we haven’t seen much movement from Class IV prices with the October contract still down at $16.40. 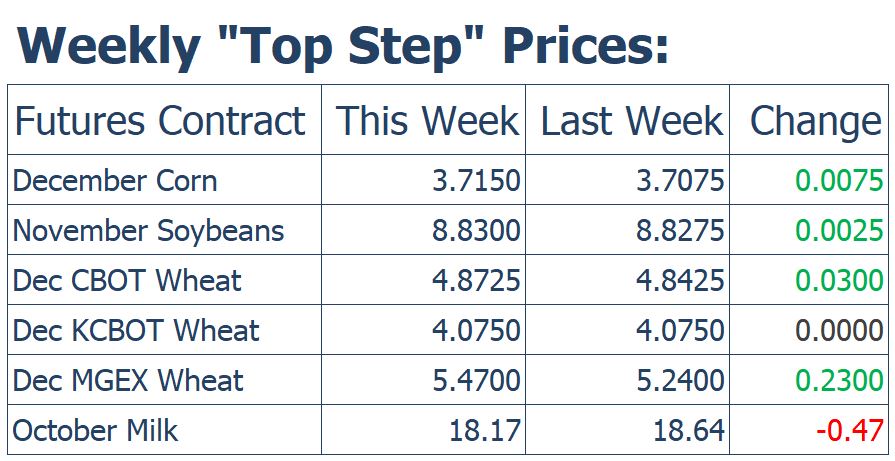