Into late 2021 ethanol markets as a whole looked to be situated great, with impressive production numbers and profit margins to match. A post-holiday slump in both ethanol and gasoline demand however has quickly changed the tone for ethanol producers. While corn prices have yet to reflect the most recent ethanol trends trouble could be quickly approaching. Data from the EIA on Wednesday showed ethanol stocks at 24.5 million barrels, that’s up over 18% in the last month. With this jump in stocks, ethanol profit margins have plummeted and now hover near break-even levels.

Soybeans push near $15 this week

The US Dollar Index posted its best week in seven months this week, rallying over 1.5 index points higher to its highest level since June of 2020. The rally in the dollar sent gold prices spiraling this week and could be a sign of hurt to come for others in the commodity sector. Soybeans seemed to ignore the move higher in the dollar this week. The gains came as markets priced in five interest-rate rises from the Fed by the end of the year, widening the gap in rate expectations between the Fed and other big economies, and boosting the dollar.

March CBOT wheat futures added 6-1/4 cents higher to close at 786-1/4. March KC wheat futures added 9 cents today to close at 802-1/4. March spring wheat futures shed 15-3/4 cents today to close at 920-1/4. Winter wheat markets had a wild ride this week rallying early in the week then falling late in the week to finish near unchanged. Weak exports and a rallying US dollar should continue to keep pressure on wheat prices. Continued dryness in the Plains and increased tensions in the Russia/Ukraine situation could be underlying supportive forces.

After the recent sharp move lower for the nearby Class III milk futures, Thursday and Friday’s trade was friendly with double-digit gains in most contracts. The February contract finished the week at $20.19, down 35 cents overall but up 69 cents from the weekly low, while the soon-to-be second month March price rallied back over $21.00. The block/barrel average was down more than 4 cents on the week but posted a nice 6.25 cent gain on Friday, while spot whey keeps chugging along with a new all-time high of $0.84/lb, up 4 cents this week. Earlier this month, Class III milk finally broke through the $20.00 barrier, while the block/barrel average pushed to 14-month highs with its break above $1.84/lb, and both returned to their old ranges this week after a severe reversal. Spot cheese will likely have to trade back above $1.90/lb to get milk futures to retest the recent highs.

Class IV milk futures also had a strong end to a negative week. February futures were down 88 cents heading into Friday’s trade and managed to halve that with a 41 cent gain today. The second month chart is just 58 cents off its all-time high posted on Monday, representing a much smaller retracement than its Class III counterpart made this week. Spot butter traded a nickel higher to $2.54/lb on Friday but was still down 39.50 cents on the week. That market had gone up too much in too short of time and was due for a correction, but the volatile swings have been something that market has not seen in years. Spot powder continues to hang on at near 8-year highs, closing down just a penny this week at $1.8050/lb. The bullish fundamentals for Class IV and its underlying spot markets remain in place, but it is tough to know if there is enough ammo to sustain a move near $24.00 for an extended period of time. 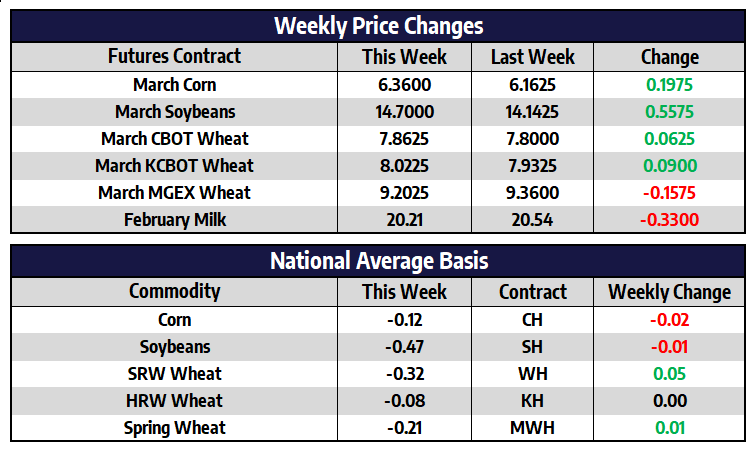