March CBOT corn futures added 1-1/2 cents this week to close at 548-1/2. December futures added 6-1/2 cents this week to close at 451-3/4. Net US export sales for corn crushed weekly records last week as 7.4 million tons (292 million bushels) of corn were sold for the 2020/21 marketing year. China was by far the largest buyer picking up over 5.8 million tons of the 7.4 million total. We are now 43.3% of the way through the marketing year for corn, export sales on the books as of 1/28/21 have reached 83.3% of the USDA’s estimate. This is excessively above normal for this time of the year, but these sales must turn into shipments soon. Only 36% of US corn sold for export in the current 2020/21 marketing year have been shipped as of January 28. This is by far the lowest export pace since at least 2005. It will take a logistical feat to export the record number of corn sales on the books by marketing year-end in August.

While the trade will be watching the February WASDE report on Tuesday the 9th, focus has been and will continue to eye the March planting intentions report for the USDA’s first guess at 2021 corn and soybean acreage. A Farm Futures survey conducted last month of 806 farmers showed favor towards higher corn acres, relative to soybean acres, early on in 2021. Farm Futures is estimating producers will increase corn acreage 4.1% from last year to 94.7 million acres in 2021. Many producers surveyed took advantage of three-year lows in wholesale nitrogen prices late in 2020 to lock in inputs. 94.7 million planted acres of corn would be the third-largest ever for the US falling shy to only 2012 and 2013.

Soybeans mixed this week
March CBOT soybean futures shed 3-1/4 cents this week to close at 1366-3/4. November futures added 18 cents this week to close at 1161. Final numbers for US exports in the month of December were released this week. Soybeans stole the show with 10.8 million metric tons (397 million bushels) being shipped throughout the month. This was 32% above the previous record in 2014 and 91% higher than December of 2019. 63% of the total soybeans shipped out of the US in December went to China. Ships are currently docked and waiting to be loaded with freshly harvested soybeans in Brazil. Delayed planting and now recent wet weather has slowed soybean harvest and second crop corn planting. Harvest of soybeans in Mato Grosso, Brazil’s largest soybean producing state, was only 5% complete as of a week ago versus the average of 18% complete.
Chinese scientists have found a natural mutation in the African swine fever virus they say could be less deadly than the strain that decimated the world’s largest pig herd in 2018 and 2019. Reuters reported last month that at least two new strains of African swine fever had been found on Chinese pig farms, which appeared to be man-made from illicit vaccines. The researchers at the Military Veterinary Institute in Changchun said there appeared to be a growing trend of lower mortality from African swine fever with more clinical symptoms that are not easy to detect and difficult to control. A setback in China’s hog herd rebound could slow their thirst for corn and soybeans.
All wheats lower this week
March CBOT wheat lost 21-3/4 cents this week to close at 641-1/4. March KC wheat shed 12-3/4 cents this week to close at 625-1/4. March spring wheat lost 7-1/2 cents this week to close at 626. Weakness in other commodities combined with a continued rally in the US dollar put pressure on wheat futures this week. Great fall weather and rising wheat prices this fall were the main drivers behind increased winter wheat seedings according to a Farm Futures acreage survey conducted last month. Farm Futures estimates total 2021 wheat acres to come in at 46.6 million acres – a 4.5% increase from 2020 planted acreage and the first time since 2018 US planted wheat acres will rise. The survey also found 2021 spring wheat acreage is likely to increase nearly 3% from a year ago to 12.6 million acres.

This week started off pretty slow in the dairy markets as futures mostly chopped around as the spot cheese market traded only 0.75 cents higher in the first four days of trade. But, the passing of the recent stimulus bill sent the market surging higher as the market is expecting more support from government purchases to come into the market. The surge from the last farm to families extension only lasted for a couple of weeks before it failed so we will have to see if the recent injection into the market can keep prices elevated.

The spot cheese market took no time at all to start moving as it traded 8 cents higher on the block/barrel average on Friday. To see a confirmation of a breakout higher you would need to see the block/barrel average pushing above $1.75/lb, the area where the previous rally failed. When looking at the 2021 calendar year average the market finished about 40 cents higher on the week at $17.16. The Class IV market remained relatively stagnant as powder prices traded lower and butter prices worked higher. 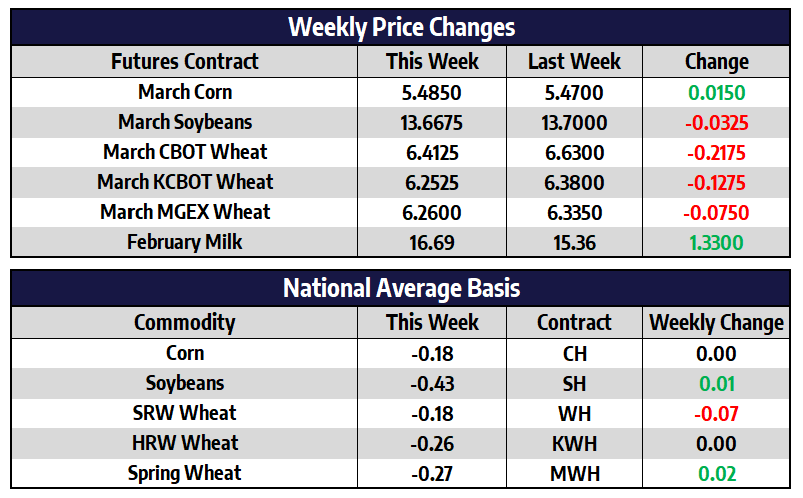