Front month March corn futures added 30-1/2 cents this week to close at 651. New crop December futures added 19-3/4 cents this week to close at 593. This was the fourth consecutive week of record high closes for the December of 2022 corn futures contract. Corn futures once again had a volatile week of trading. Rumors late in the day on Friday that a Russian invasion of Ukraine “could begin any day now” sent crude oil and corn prices higher. These comments came from White House security adviser Jake Sullivan. Sullivan also stated in his briefing any American still in Ukraine should leave in the next 24-48 hours.

As soon as the soybeans are harvested in Mato Grosso, farmers are planting their safrinha corn which was 42% planted as of late last week compared to 8% last year and 28% on average. The Mato Grosso Imea (Institute of Agricultural Economics) estimates that 94% of the safrinha corn will be planted within the ideal planting window which will close by the end of the month. The forecast is calling for above normal rainfall during March, April, and May which should benefit the safrinha corn. Last years safrinha crop was negatively impacted by late planting and dry weather.

Soybeans trade above $16 this week

The soybeans in Mato Grosso, Brazil’s largest soybean producing state, were 46% harvested as of late last week. This compares to 11.2% harvested last year and the five-year average pace of 33.6% harvested. Mato Grosso is expected to produce nearly a 40-million-ton soybean crop which would be a new record and a 9.5% jump from last year. While harvest in well underway in northern Brazil soybeans in Argentina are entering their pod fill stage of development. Weather to end the month in Argentina will be vital to maintaining current production estimates.

The Class III milk market put together a solid Friday with the second month March contract closing up 57 cents at $22.68, totaling 77 cents in gains for the week and trading within a nickel of last month’s high. A close above the $22.95 level would open up the topside again and bring the 2020 highs into focus. The block/barrel average closed the week up just over a penny at $1.90875/lb and will be watched on another approach near $2.00. Spot whey was 3.25 cents high today, but still down 3.50 cents on the week, posting just its second negative weekly close since the end of August. With the complex approaching the January highs, Class III milk and the spot markets are setting themselves up for an interesting week coming up. 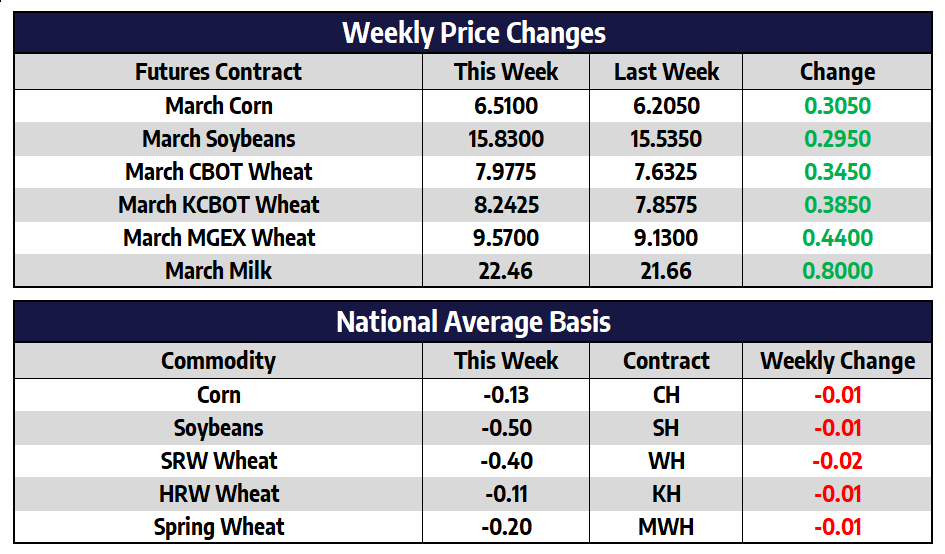