May CBOT wheat added 5-3/4 cents this week to close at 547-1/2. For the month of February, front-month corn was a 1/2 cent higher. CBOT December 2021 corn traded to a new contract high while adding 10-3/4 cents this week to close at 470-3/4. Weather forecast discussion here in the US will begin to gain steam in the coming weeks as planting is just now beginning in the far southern US. The one-month outlook from the CPC is calling for above-normal temperatures across much of the corn belt with a wetter leaning bias for the eastern half of the Corn Belt. Weekly US corn export sales were only 17 million bushels this week, a marketing-year low and well below expectations. A large cancellation from “unknown destinations” was a large contributing factor to the disappointing net sales number. Seasonal patterns suggest a lower futures trend into Brazilian harvest and planting here in the US.

About a third of Mato Grosso’s (Brazil’s largest corn-producing state) 2nd crop corn will be planted outside of the ideal window which closes this weekend. This has never happened before in Brazil and will account for a huge number of acres as record plantings are expected. 2016 was the last time Brazil’s corn crop was planted later than ideal, drought conditions that year dramatically reduced yields. Wet weather has been the issue in 2021, preventing timely harvest of soybeans and following plantings of 2nd crop corn. Much like here in the US in the spring of 2019, the financial incentive in Brazil to plant corn will push farmers to plant late.

Soybeans continue mostly sideways
May CBOT soybeans added 24-1/4 cents this week to close at 1404-1/4. November soybean futures added 26-3/4 cents this week to close into a new weekly contract high of 1223. For the month of February front-month soybeans added 34-1/4 cents. US soybean export sales last week were the 2nd lowest of the marketing year coming in at 6 million bushels. A seasonal slow in soybean export sales is expected as the Brazilian soybean harvest pushes on. Brazilian harvest and exports have been delayed due to wet weather and delayed planting back in September and October. As of late last week, the 2020/21 crop was 15% harvested compared to 31% a year earlier. In many areas of Brazil, this is the slowest soybean harvest in the last decade.
Recent research has suggested that natural mutations of the African swine fever in China might be causing a milder, less deadly form of the disease in pigs, but it is potentially harder to detect and more difficult to control. The paper by a team at the Harbin Veterinary Research Institute under the Chinese Academy of Sciences is the second this month to report on natural mutations in the virus which ravaged China’s pig herd during 2018 and 2019 and continues to kill pigs in the world’s biggest pork producer. China’s mammoth demand for corn and soybeans has been led by a continued rebuild of their hog herd. A slowing of this growth would surely clip the wings of at least some demand.
Chicago higher, KC and MPLS lower this week
May CBOT wheat added 4-3/4 cents this week to close at 660-1/4. May KC wheat lost 4-1/2 cents this week to close at 663-3/4. May spring wheat lost a penny and a half this week to close at 638-3/4. The International Grains Council raised its forecast for global wheat production by 5 million tons to 773 million. Australian wheat production was revised up to 33.3 million tons from 31.2 million as a previous estimate from 15.2 million in their last report. The Russian crop was also revised higher in this month’s report. Weekly export sales for the week ending February 18 showed net wheat sales at 167,741 tons for the current marketing year which was below expectations. Cumulative sales have reached 87.9% of the USDA forecast for the current 2020/21 marketing year versus a 5-year average of 85.6%. Sales need to average 117,000 tons per week to reach the USDA forecast.
Class IV Milk Works Higher
For the second day in a row, some nearby Class IV milk futures contracts finished the session double digits higher. Since Wednesday’s close, April Class IV is up 46c while May Class IV is up 45c. Class IV is being supported by a rising butter market and a strong week for the powder trade. Spot powder added 4c this week and closed at $1.1325/lb on Friday. That is its highest close since February 2. For butter, the spot price did fall 8c this week, but the market is still up 22.50c so far this month and the short-term trend has turned higher. The Class IV market has a reason to move higher once again due to all of this bidding in the spot trade.

Despite trading mostly lower on Friday, the Class III market had a pretty good day overall. The market was able to shake off some selling pressure in the spot cheese trade and hold onto most of Thursday’s gains. April Class III was up 75c yesterday and tacked on another 3c today. May Class III was up 57c yesterday and fell just 7c lower today. Each class III contract from April 2021 to December 2021 is within striking distance of the $18 level, with a couple contracts actually surpassing that mark at one point today. Market sentiment has improved after the January milk production report showed production growth up just 1.60%. 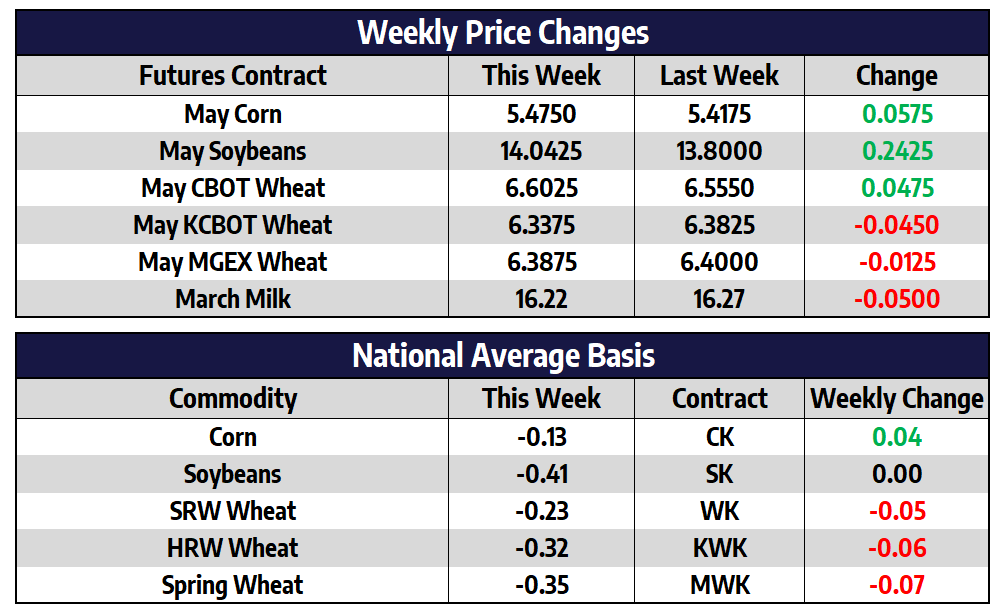