May corn futures added 96-1/4 cents this week to close at 7.52. New crop December corn futures added 49-3/4 cents this week to close at 629-1/2. Ethanol production for the week ending February 25th averaged 997,000 barrels per day, which was below expectations. Ethanol stocks continue to remain elevated currently 11.2% above last year’s levels. The Biden administration said on Thursday they would be studying whether waiving US biofuel blending mandates could help stabilize soaring prices for key food ingredients like corn. This would be a big hit to the ethanol industry.
Brazil’s safrinha corn crop was 64% planted as of late last week, this compares with the just 39% that was planted in the same week last year. This was an 11% jump week over week for the safrinha crop. Mato Grosso, Brazil’s largest safrinha corn state, was 94% planted as of this week compared to 54.6% last year and 77% on average. In Mato Grosso safrinha corn planting has steadily stayed above average by 2-5 days nearly the entire year so far. The ideal planting window for the second crop has now closed but due to the high price’s farmers will continue to plant corn here into March.

Class III prices pushed to new highs to begin March, led by a $1.20 gain in the April contract with a close at $23.68. That contract held a daily high on Friday of $24.00, eclipsing the July 2020 peak on the second month chart and sitting just beneath the November 2020 high of $24.09. Spot cheese was a winner this week with its first push over $2.00/lb in a year and a half, gaining 13.75 cents in total, with a close at $2.06/lb. The block/barrel spread, after spending seven weeks within a nickel of even, has pushed to 18 cents as blocks have led the way higher. On the negative side, spot whey was lower for the fourth straight week with a 2.25 cent drop to $0.7575/lb. 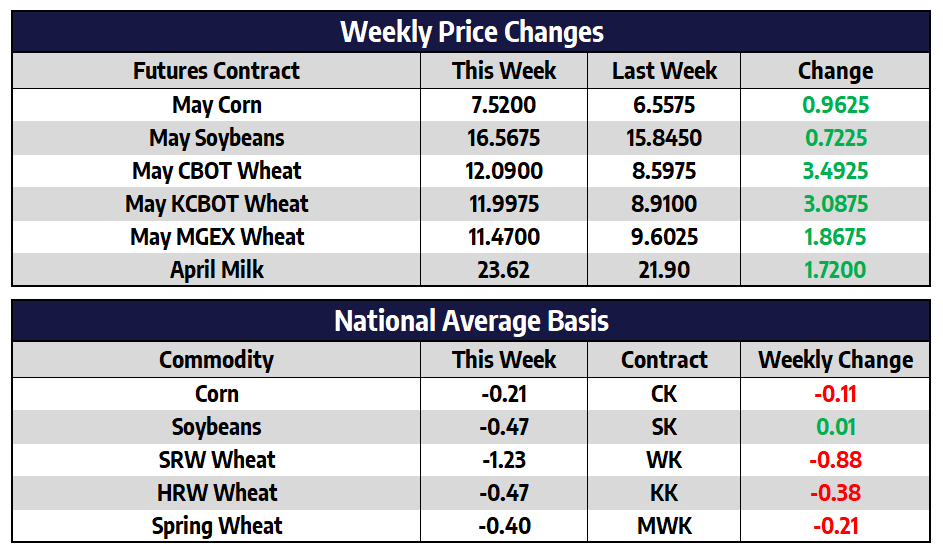