Spring planting is just underway in Ukraine with an estimated 150,000 hectares planted so far. Ukraine’s deputy agriculture minister said this week that the 2022 spring crop area may be more than half the 15 million hectares planted in 2021. He expects a decrease in the area planted with high-margin crops such as sunflowers and corn while acres to rise compared to last year for more simple crops important to food security such as peas, barley and oats. Ukraine has suspended exports of nearly all commodities since the invasion but is reportedly considering cancelling export limits for corn and sunflower oil as their domestic stocks are high.

Soybeans Close Above $17 This Week

Farmers in Brazil had harvested 69% of the 2021/22 soybeans as of late last week compared to 59% last year and 62% on average according to AgRural. This was a 5% jump on the week, soybean harvest is just getting underway in far southern Brazil. Paraguay has completed this year’s soybean harvest and according to the country’s Soybean, Oilseed and Cereal Producers Association, this was the worst crop in modern history. Analysist are estimating the county will produce just 4 million tons of soybean this year, a 40% drop from what was expected during planting. Historically however, Paraguay has accounted for less than 2% of world soybean production.

Milk Lower Friday, Up on Week

Class III milk futures saw prices trade down on Friday, with the April contract falling 20 cents to $24.30, but was still 87 cents higher for the week. The calendar year average hit a new high at $23.67 on Tuesday this week and settled at $23.34 by Friday’s close. Milk prices remain at historically great levels and this week’s February Milk Production report helped, showing a 1.00% drop year-over-year. Cow numbers did see their first month-over-month increase since May 2021, so that will be a trend to watch in coming months. Spot cheese was a big winner this week, closing at $2.2625/lb, which was up 18.25 cents overall and is sitting just beneath the 2019 high of $2.26875/lb. Demand remains strong, but prices have hit levels that are traditionally short-lived, so it is worthwhile being on the defensive.

After trading lower the two previous weeks, the Class IV market was positive, with a push to a new all-time high on the second month chart at $25.33. The calendar year average closed at $24.70, an impressive 31 cent gain since last Friday’s close. Spot butter continues to hold at strong levels, gaining 7 cents this week, with a close at $2.7950/lb. There isn’t much to get excited about unless that market can breach the January high at $2.9350/lb, but the fact both it and spot powder have gone sideways at multi-year highs is encouraging. For the upcoming week, there are no dairy-focused fundamental reports, but Thursday’s Planting Intention’s report and its effects on the grain/feed markets will be something to keep an eye on. 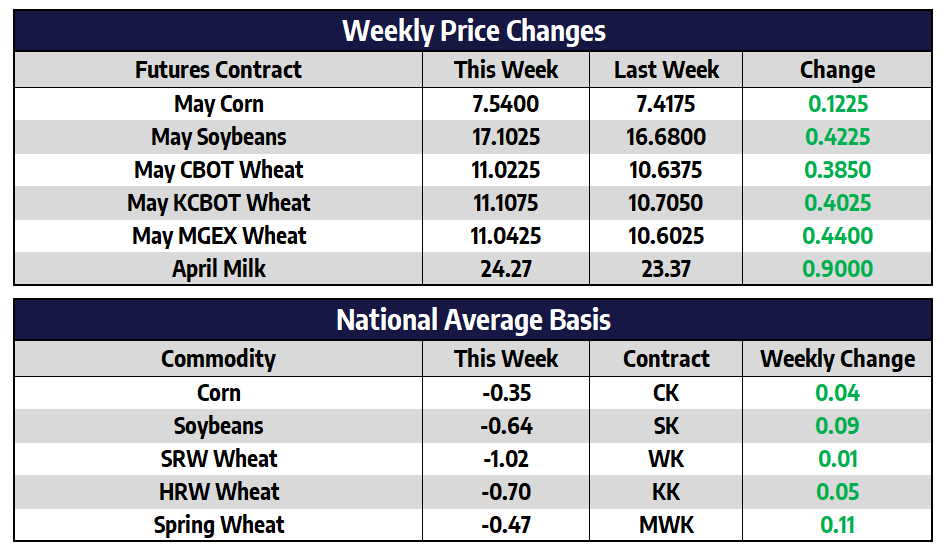