Corn closes the week over $8

July corn futures added 24-1/2 cents this week to close at 813-1/2. New crop December corn futures added 26-3/4 cents this week to close at 751-1/4. December 2022 corn futures closed the month of April with a more than 70 cent gain, this comes on the heels of a 76-1/2 cent gain during the month of March. New crop corn futures traded to a new contract high once again this week on continued prospects of delayed planting for the US crop. With a high of 757 this week, December futures were nearing the December contract highs from 2008 and 2011. If new crop futures were to see continued strength above these previous highs the next objective would be the all-time high for December corn futures from August of 2012 when prices traded up to 849.

A cargo carrying over 71,000 tons of Ukrainian corn left the Romanian Black Sea port of Constanta this week. This is the first ship of Ukrainian corn to depart from a port since February 24 when Russia first invaded Ukraine. The challenge is getting the grain out of Ukraine to the port of Constanta, which is Europe’s fasted grain loading terminal. The infrastructure around the port makes for slow access and generates additional costs according to the port’s manager. Also reported this week, Ukraine and Bulgaria have reached an agreement on transporting Ukrainian grain via a Bulgarian port. No timeline or details of the volumes of grain to be shipped were discussed, however.

The Chinese yuan has tumbled about 3% this month as the US dollar has continued to strengthen. This week the People’s Bank of China announced a cut to their reserve requirement ratio on foreign exchange deposits effective May 15. Analysts say this is a strong sign the PBOC is getting uncomfortable with the rapid depreciation of its currency. Also, this week the US dollar pushed beyond its 2017 high putting the next target at the late 2002 peak of 105 index points. The thought process has long been if the US dollar index strengthens, dollar-based US commodities will see decreased demand on the global market. However, the decreased demand has yet to appear for many commodities.

July CBOT wheat futures shed 19-1/2 cents this week to close at 1055-3/4. July KC wheat futures shed 43-3/4 cents this week to close at 1105-3/4. July spring wheat futures added 3-1/4 cents this week to close at 1166. Much needed rains are forecast for much of the Plains over the next seven days, while snow and rain continue to delay spring wheat plantings. Longer-term outlooks continue to call for warm and dry conditions in the weeks to come for the majority of the Plains states. For the first time in over a decade, India’s farmers are selling their wheat to private traders instead of state stockpiles as elevated global wheat prices are allowing for a rare profitable window. The rarity comes at a welcome time given a record wheat crop in India, the world’s second-largest wheat producer. After a strong month of export sales in February and March, India’s wheat shipments are up 275% compared to the same period last year. Traders say exports could jump to 12 million tons this year taking India from a nearly nonexistent to a serious player in global markets.

Class III futures were two-sided today with the calendar year average falling a penny to $23.21, down 15 cents on the week but up 17 cents for the month. The second month May contract closed a dime lower this week as it shifts to the front month, finishing April down 2 cents overall. While the short-term trend has turned down over the last couple weeks, this month brought a new all-time high for the second month chart and plenty of good hedging opportunities for milk producers. Spot cheese fell 2.6250 cents this week with a close at $2.3550/lb and is still hanging near its recent high. The possible seasonal pressure for milk, the higher trend in the dollar, and the ebbing of global dairy product prices may leave the market on the defensive entering the new month.

The Class IV trade was mostly higher today with the calendar year average jumping 7 cents to close the week at $24.09, representing a 15-cent fall this week and a 42-cent drop for the month. April was the first month in 9 months that the second month Class IV contract closed lower, and also breaks a streak of 7 higher monthly closes for the 2022 average. Today, the second month chart was unchanged but the June through November contracts all caught some higher bids, but volume was light. Spot butter closed out the week less than a penny higher at $2.6750/lb and while it has yet to fall out of bed, gave some evidence of bearish technical action this week. Next week is a busy week for fundamental reports with a GDT Auction on Tuesday as well as March US dairy exports and Dairy Products Production on Wednesday. 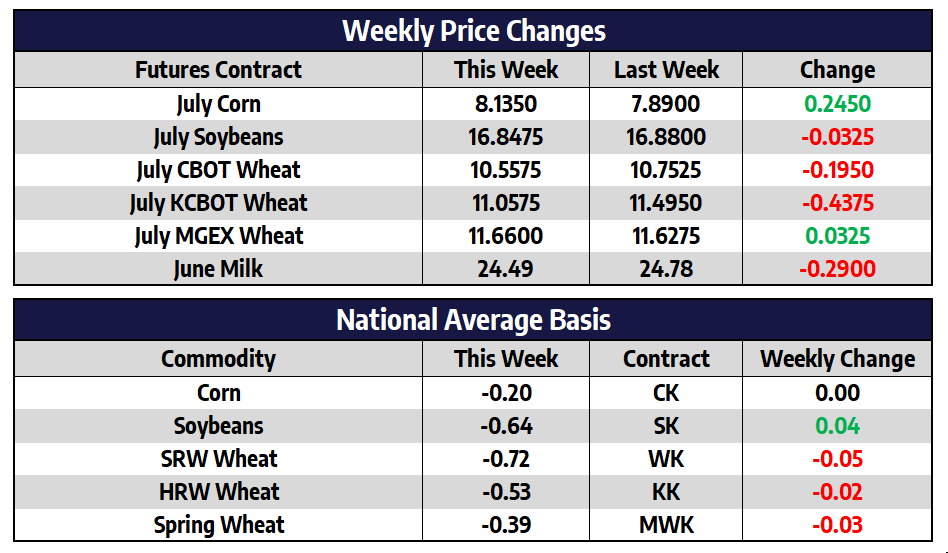