Corn posts yet another big up week

July corn futures added 40-3/4 cents this week to close at 673-1/4. After starting the week higher, December corn futures showed some rather weak price action to close out the final week of April. New crop futures traded as high as 593 in the early morning hours of Tuesday but closed well off that high at 563-3/4, but still 13 cents higher on the week. While December futures had a soft close to the month the new crop contract managed to add 86-1/4 cents during the month of April, this was the best month for December corn since July of 2012. The volatility witnessed in the market over the last few weeks looks to be here to stay as daily price limits for corn increase to 40 cents per bushel on Monday.

With 18 weeks left in the 2020/21 marketing year 12.5 million tons of corn remain on the books to ship to China. Exports need to average around 675,000 tons per week from now through August to meet current sales on the books to China. That is well above the recent shipments pace over the last month near 500,000 tons per week. If bigger weekly export volumes to China are not seen soon, angst could build over whether China will roll some of this year’s corn into the 2021/22 marketing year or even cancel some orders currently on the books. Either scenario will more than likely put doubt into the 2021/22 USDA’s corn export intentions which the trade will get a first look at on the May 12th WASDE report.

July soybean futures added 18-1/4 cents this week to close at 1534-1/4. November futures shed a penny and 3/4 this week to close at 1339-3/4. November futures added 83-1/2 cents in the month of April, November futures have added more than 70 cents per bushel in four of the last six months. A favorable weather forecast for the US and accelerated planting pace could lead to additional selling pressure. A large portion of the Midwest is expected to receive 1/2 to 1-1/2 inches of rain in the next five days. The Dakotas are showing chances for above-normal precipitation in the 8–14-day models as well.

Soybean futures were under pressure this week as Brazilian soybean basis slipped weaker on talk of China cancelling some Brazilian soybean cargos in the June/July timeframe due to softer soybean meal crush margins as African swine fever continues to hurt demand. An ASF outbreak was reported this week on a farm in Inner Mongolia. Of the 432 pigs, 343 had already died, the remaining pigs were culled in an attempt to contain the outbreak. Two other outbreaks have recently been reported in the surrounding region. ASF has had a significant impact on hog production in the first quarter of this year in northern China. The USDA, in a voluntary report this week, stated China’s hog numbers are not likely to rebound until at least mid-2021 if this current ASF outbreak is brought under control. Producers are reportedly delaying the restocking of farms due to concerns about new ASF outbreaks, high piglet prices, and high feed costs.

The Class III and IV milk futures markets saw little price action during Friday’s session but still ended the week strong overall. The second month Class III contract gained 20c this week while the third month contract added 83c. The second month Class IV contract finished the week up 14c while the third month contract added 40c. Feed continues to be a very strong supporting factor to this milk rally. Corn futures were limit higher again on Friday, with the July contract up 40.75c this week. This was the fifth up week in a row for corn. The CME has raised daily price limits from corn – which will now be 40c next week. Expect more volatility ahead as a result.

This week was another steady one for the dairy spot trade. Spot whey, powder, and cheese all finished the week green. The only market that ran into more offering was the butter trade, but it only fell 1.75c in total. With global dairy levels holding at higher levels and the expectation for lower milk production throughout the year because of the high feed costs, the US spot market is steady. There will be a Global Dairy Trade auction next week, so we’ll get a look at where global prices are headed. The most recent auction was fairly neutral. 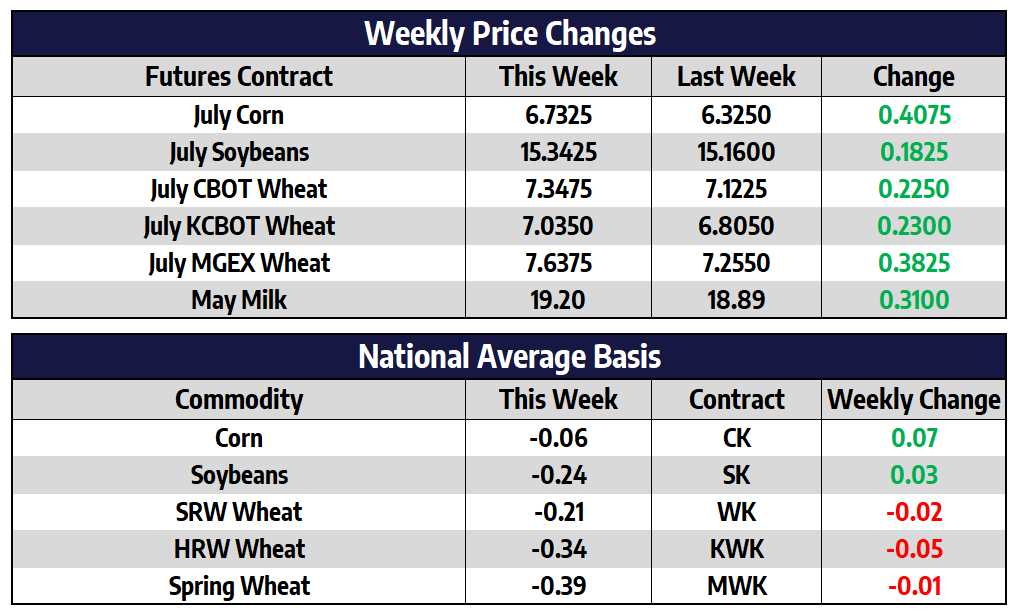