July corn futures shed 28-3/4 cents this week to close at 784-3/4. New crop December corn futures shed 30-1/2 cents this week to close at 720-3/4. The forward-looking nature of the futures market this week eyed much above normal temperatures for nearly the entire Midwest next week. In the last seven days, many Corn Belt locations that were worried about a forming drought have received 2 to 3 inches of rain. The eastern half of the Dakotas, as well as Nebraska, benefited the most from the recent moisture. While the possibility of a “flash drought” continues to be discussed by many as a possibility this summer, for the time being, soil moisture levels are favorable and even in excess across much of the Corn Belt.
Brazil exported 702,777 tons of corn during April, up sharply from 130,876 tons last year. Traders remain concerned with a smaller crop from Ukraine this year and a smaller second crop out of Brazil due to recent dryness will support higher corn prices. Front month corn futures traded below, but closed above last week’s low of 781. First support for front month corn should come in at the 10-week moving average of 770. A break of this level would be the first sign of changing trend in the corn market.

July soybean futures shed 62-3/4 cents this week to close at 1622. New crop November soybean futures shed 44 cents this week to close at 1470-3/4. Soybean oil futures followed Malaysian palm oil futures lower this week, as palm oil inventories in Malaysia have increased 13% in April to their highest level in five months. It is also believed by many that Indonesia will soon lift their export ban soon. With the macro fundamentals that drove vegetable oils to their new highs have not entirely changed, prices may be overvalued in the short term given recent developments.
Brazil’s biodiesel producers have been critical of the Brazilian government since last December when the biodiesel blend was lowered from 13% to 10% and declared to stay at the 10% level for all of 2022. The government cited rising soybean oil prices as the reasoning behind the decision. In a joint statement from the three leading biodiesel producers, the companies contended the decision was contrary to the government’s commitment to greener energy and renewable fuels. With the reduced demand for soybean oil, the Soybean Producers Association of Brazil fears processors will send more of their soybeans to the export market instead of processing the soybean into value added products.

Class III futures started the week with two down days followed by a couple days of recovery, but prices turned red again during Friday’s action. The second month June contract finished today at $24.46, down a dime on the week and in the middle of about a $1.40 range. Spot cheese finished the week a penny higher, an impressive feat given the milk volatility and hefty drop in GDT prices. For Class IV, the price action this week was also up-and-down, but the June contract closed 30 cents lower, its fourth negative weekly close in a row. Spot butter was down 3.50 cents, with a close at $2.64/lb, still managing to avoid a selloff from multi-year highs so far.

The milk markets have set back off their mid-April highs and have entered a period of possible season pressure. Also weighing on the market was the sharp drop in the GDT Index, although US March exports were released on Wednesday and showed another impressive month. Going forward, it is safe to assume the uptick in both milk and dairy product production will continue given current price levels, which eventually will begin to weigh on this exceptional bull run. A higher dollar and recession talk are bearish factors as well, but for every person mentioning those factors, there is someone talking inflation and food shortages. Producers should continue to tune out the noise and focus on managing risk where possible. 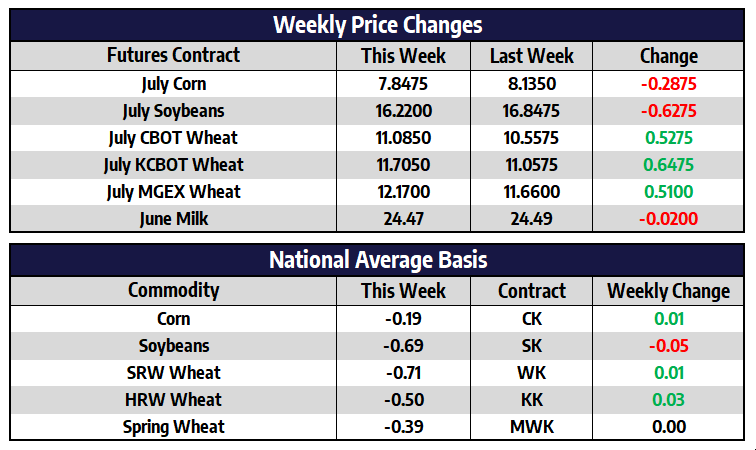