July CBOT corn futures added 15-3/4 cents this week to close at 659-1/2. December futures added 3-3/4 cents this week to close at 546-1/2. The Climate Prediction Centers June outlook suggests warmer than normal temperatures across much of the Corn Belt and the northern US with chances for a wetter than normal month in the eastern Corn Belt. The 6 to 10-day outlook from the CPC is calling for above-normal temperatures across the heart of the Corn Belt as well as above-normal precipitation centered around Iowa and Illinois. Both the shorter-term outlook as well as the longer-term monthly outlook appear to be supportive to this growing corn crop and could put pressure on corn prices in the days to come.

The Chinese buying spree of US corn in the last two weeks has been rather impressive. China has purchased 10.4 million tons of corn in 9 of the last ten trading days, this is equivalent to nearly 425 million bushels. The USDA has 2021/22 corn export expectations at 2.45 billion bushels, the marketing year will start in September. It is highly unusual to have this large of an amount of sales on the books this early on in the growing season. These sales however must be taken with a grain of salt because they are just sales on paper and can be cancelled anytime before September of 2022.

July CBOT soybean shed 61-3/4 cents this week to close at 1526-1/4. November soybeans shed 40-1/4 cents this week to close at 1360-1/2. The soybean charts, both old crop and new crop, look to be under pressure and in a downtrend given price action in the last two weeks. The soybean complex as a whole may be in a corrective phase with soybean oil posting a reversal this week and meal prices in free fall since late last week. Soybean oil has been the leader of the soy complex higher as of late but a drop in palm oil futures and a setback in energy prices accelerated selling pressure this week. Good rains as of late and a wet and warm two-week outlook added weight to the market as well this week.

China imported more US soybeans than normal in April because supplies out of Brazil were delayed due to a wet start to harvest. Total April 2021 Chinese soybean imports were up 11% from April of 2020. While much attention in the last few weeks has been on corn export sales, new crop soybean sales are quietly inching over 250 million bushels mark as of last week. This is a seven-year best for the date, China currently accounts for 44% of those sales on the books while unknown destinations make up another 37% of the total.

July CBOT wheat futures shed 33 cents this week to close at 674-1/4. July KC futures shed 33-3/4 cents this week to close at 624. July spring wheat futures led the losses in the wheat complex this week losing 39-3/4 cents to close at 701. Russia’s ag ministry sees their wheat crop for 2021 at 80.7 million tons. This is down from last year’s crop of 85.9 million tons. The wheat tour across the US Plains this week found record yield potential in Kansas but stated protein content might be disappointing. The tour estimated wheat yield at 58.1 bushels per acre, this was well above the previous high estimate for the tour of 49.1 bushels per acre in 2012. If realized, this would be the highest yield on record for Kansas, topping the previous mark of 57.0 bushels per acre set in 2016 based on USDA data. While increased moisture has helped raise yield prospects, continued moisture as of late has increased the threat of yield-robbing rusts and other crop diseases.
This Week’s Trade Dominated By Lower Spot Cheese

Market activity in the dairy markets this week seemed to be completely focused around the spot cheese markets at the CME. The block/barrel average finished down sharply, losing 13.875 cents on the week to close at $1.58875/lb. The block/barrel average has now had six consecutive down days after the recent slide started last Friday. The break of short-term support for the block/barrel average indicates that prices may retest the 2021 lows near $1.48/lb. This is a difficult time of the year for cheese prices to rally as we have been in peak milk production this month. The other products movement in the spot market has been minimal with whey up 0.5 cents, butter down 0.5 cents, and powder down 0.25 cents on the week.

If yesterday’s Milk Production report is any indication of the current production pace then milk is likely plentiful. The USDA put out its April Milk Production report this week, which showed production growth of a whopping 3.30% from the same month last year. These are not friendly numbers to the market and could add resistance moving forward. With the feed cost narrative starting to slow down as feed goes through a correction, the market may turn its focus to this heavy production taking place across the United States. Should that continue, the market may give back some of its premium pumped into these nearby contracts. For the week, second-month Class III milk dropped $1.23 to $18.13 while third-month milk was down 71c to $18.93. 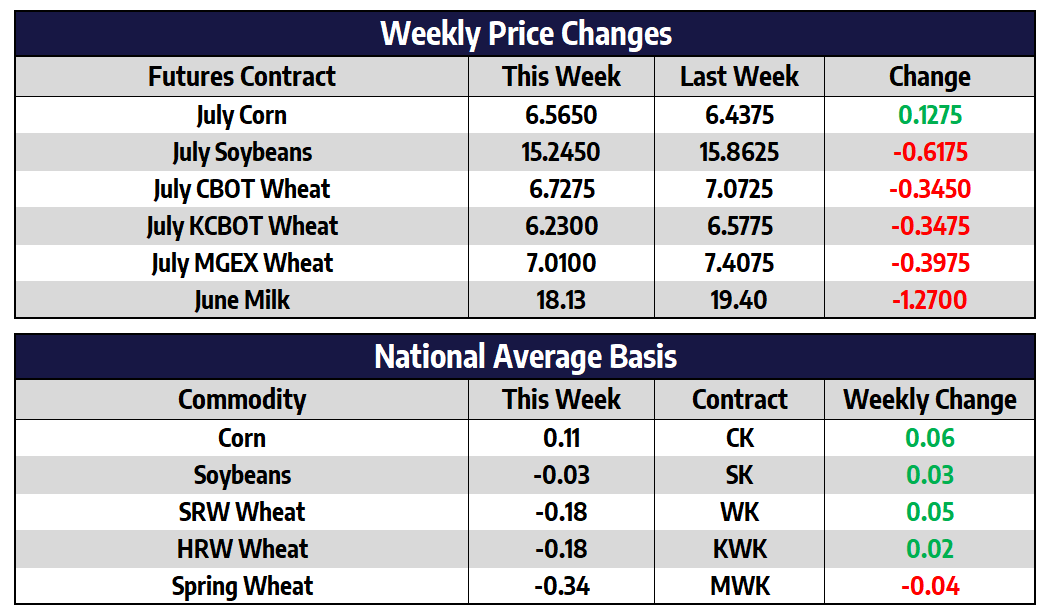