December corn futures were a 1/2-cent lower this week to close at 526-3/4. Bulls and bears alike could claim a win this week as the continued stalemate resulted in once again sideways price action and trade. With October encroaching upon us, most of the supply side questions in the market for this year have been answered. So, the demand side of the equation will need to do the heavy lifting of any upside price action. The onset of harvest pressure and current hefty net long positioning’s of the index and managed money funds appears to pose more downside risk than upside potential in the near term.

Export news this week was bearish and the weather forecasts for the US and South America are seen as forces keeping pressure on the corn market. Exporters announced the sale of 138,403 tons of US corn sold to Guatemala on Thursday. China has been quiet as of late on the buying front of US corn or soybeans. Looking at January through July, corn sales to China in terms of US dollars tops all other US agricultural and related products. Soybeans are a close second and are expected to regain the top spot by the end of the year.

Soybeans battle back after poor start to the week

November soybean futures added one cent this week to close at 1285. July futures added a 1/4-cent to close at 1305-1/4. After closing below the 200-day moving average on Monday, November soybean futures managed to rally back this week finishing a penny higher on the week and above the pivotal 200-day moving average. While no indications of an established low in the market have surfaced, this late-week strength is a good sign of resilience in the market. Poor export demand continues to be a major pain point of the bean market. After this week’s poor soybean export numbers, export sales for the current marketing year are nearly 50 million bushels below the pace needed to meet the USDA’s projection.

All three wheats higher this week

Within the Class III market, we saw the market trade a 64 cent range from high to low, but the market only ended up with a 10 cent increase on the week after it was said and done. Trade happened on both sides of the market as the chart formed a weekly Doji. The same stagnation has been seen in the Class IV market as well with the Class IV October contract trading unchanged for three consecutive days this week. Markets seem to be at a lull in movement as they wait to see if the typical seasonal support comes into the market.

The market received a lot of fundamental information this week with milk production and cold storage coming out this week. Highlights include the fact that milk production was only 1.1% higher in the month of August and cow numbers continue to decline from the May high. Unfortunately, cold storage numbers did still show 4% growth YoY in cheese stock numbers. If the trend of slower production numbers continues we may see that translate better to cheese storage numbers. We also had the Global Dairy Trade Auction heading higher this week to continue to support the fact that domestic prices for dairy products are cheap in comparison to the rest of the world. This is likely to keep our export markets strong. 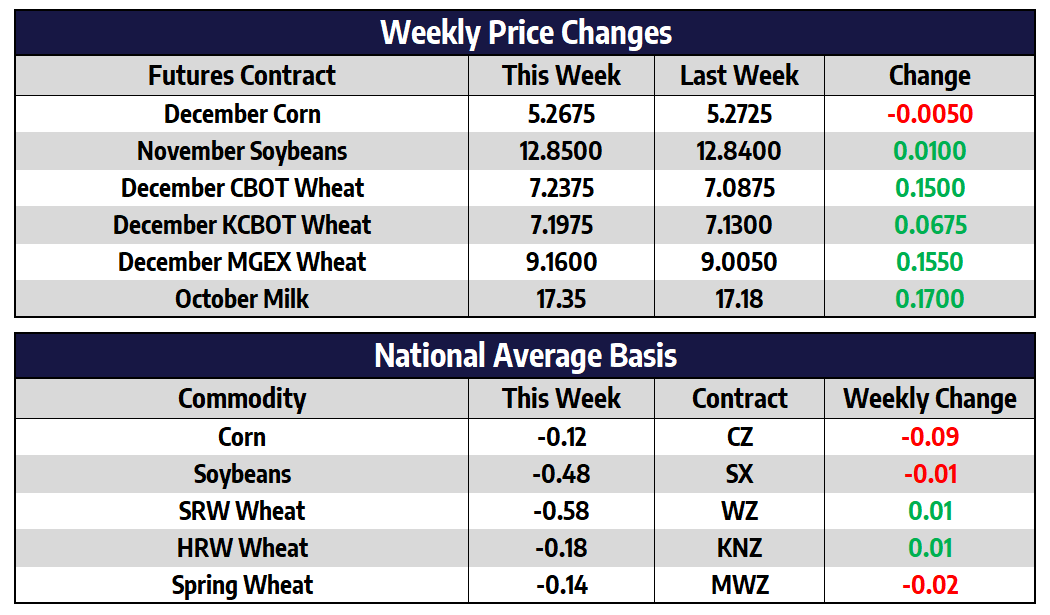