The corn market saw volatile price action this week, before finishing with a small gain when it was all said and done.  Early in the week, the market followed though from last Friday’s rebound after the release of the USDA report and continued to move higher.  Price action looked good until the market set back on Wednesday following the signing of the trade deal with China which failed to shed anymore light on potential demand.  The soybean market dropped as a result, and corn followed.  Thursday saw a sharp pullback in the corn market with prices dropping 12 cents, on additional negative sentiment from the lack of specifics in the trade deal, and expectations that demand potentially may not improve for several months.  Friday reversed that action, as prices rallied back 13-3/4 cents to settle at 389-1/4 on the March contract, up 3-1/2 cents on the week.  There was talk of stronger basis levels for shuttle trains to the PNW on Friday, which typically would signal there is export demand surfacing.

Demand for corn remains the key going forward.  This week’s ethanol production report showed a strong numbers for corn grind, putting production for the week ending January 10 near 2019’s peak level of production.  That looks good, however, over the last 2 weeks ethanol stocks have increased sharply and margins continue to run in negative territory on paper.  This begs the question, will plants start to idle back again?  Export demand has remained lackluster, and may remain so with South America’s harvest approaching unless China does step up and buy US corn soon.

Soybeans traded lower this week in textbook “buy the rumor/sell the fact” fashion.  March futures finished 16-1/4 cents lower overall for the week, following a rebound of nearly 6 cents on Friday to settle at 929-3/4.

Soybean futures had recently been at or near 2018 highs ahead of Wednesday’s signing of Phase 1 of the US/China trade agreement. The market was left disappointed that there were no further details on potential soybean exports and sold off. The agreement states that China will increase its buying of US agricultural products by 12.5 billion dollars in year 1 (presumably 2020) over the baseline of China’s $24 billion imported in 2017 and an increase of $19.5 billion in Year 2. This is good news for the American farmer. However, the agreement did not give a specific breakdown of those dollars and includes all agricultural products including meat and seafood, not just row crops. It was this lack of details and inclusion of a provision that purchases will be based on market conditions that had the markets feeling underwhelmed. Ultimately the agreement is good for US farmers as it removes the recent trade barriers (tariffs) that increased the cost of US soybeans to China and made them less competitive to South American supplies. Add to this the possibility of fewer soybean acres planted in 2020 and prices should ultimately move higher. The USDA already predicts that global soybean use will outpace production during the 2019/2020 marketing year and that world ending stocks will decline by nearly 500 million bushels. For now, the trend is lower with the break Wednesday of support at 935 March but should find support above contract lows.

Wheat futures rebounded on Friday with solid gains to erase losses on the week through Thursday’s close.  Chicago March futures closed 5-1/4 cents higher on Friday at 570-1/2, up 6 cents on the week.  KC March finished 6-1/2 higher at 494-1/4, down just a half cent on the week, while Minneapolis closed 9-3/4 higher at 560, up 1-3/4 on the week.  Following the signing of the trade deal with China on Wednesday, the wheat market has largely followed the direction of corn with prices pulled lower on Thursday and rebounding sharply on Friday.  The overall uptrend of the wheat market remains intact despite prices pushing into overbought territory on a number of technical indicators, and also as US and world stocks of wheat remain heavy.  Prices have moved within 20 cents of Chicago wheat’s 2018 highs and likely starts to see move resistance building.  Expectations are for US export demand for wheat to improve as China likely will increase purchases.  However, there remains uncertainty on the quantity that may be purchased and the timing of any business.

The spot cheese block/barrel average came fighting back this week as buying demand took the price up 6.625c to a $1.7625/lb close. This instilled some confidence back into the class III market – especially helping out the nearby months. February milk gained 39c this week while March added 29c. Additionally, Q2, Q3, and Q4 2020 class III milk averages all hit new highs. News highlights for the week were that the USMCA was signed and the Phase One trade deal between the United States and China was signed. The dairy market is back on the upswing

We continue to believe that using a stop approach in this bull market is the best way to go at this time. By doing so, we can let the market come to us and tell us that it is going to turn over before making additional recommendations. By keeping stops beneath the market, we can let the trend continue higher which ultimately will make hedge protection better. We will look to raise those stops up along the way as the market continues higher. As of right now, the class III market is in month 11 of this bull market. The average bull market in milk is 20 months in length. There should be more to 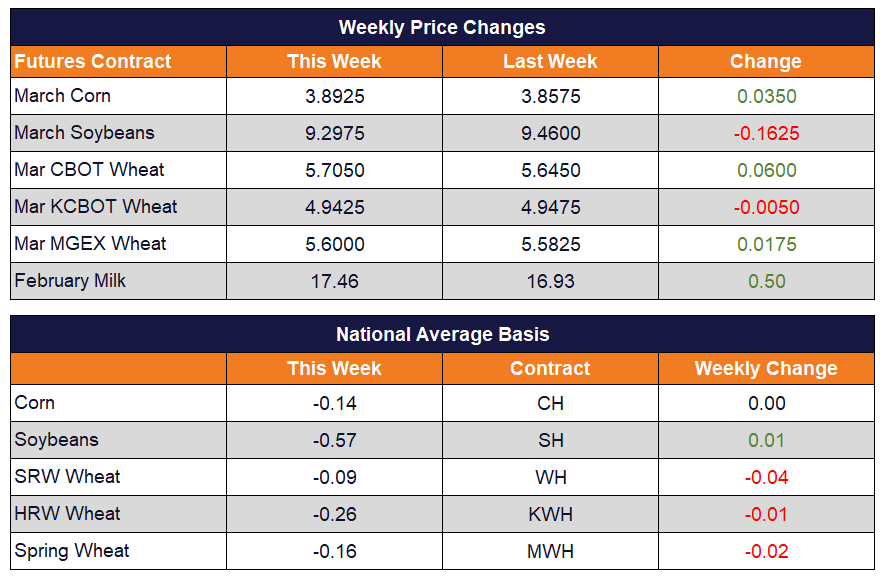