Corn finishes week lower after touching through nearby resistance.

Price action in the corn market was choppy this week, with prices ultimately finishing lower overall at week’s end.  Today, March futures finished down 6-1/2 cents at 387-1/4, putting that contract down 2 cents overall on the week.  December futures closed 5 cents lower on Friday to settle at 398-1/4, down 4-1/2 cents on the week.  Thursday’s price action pushed the March contract above nearby resistance at 392, however, the market was unable to hold above those levels on Friday as weakness in the wheat and soybean markets pulled corn lower.

In the last two days, the USDA has announced export sales of nearly 400,000 MT for the current crop year, with Guatemala listed as buying 114,000 MT and the balance currently listed for unknown destinations.  US prices have looked competitive with Argentina, and this recent business is hopefully a sign of more to come.  This week’s export sales figure came in just above the range of estimates.  Ethanol production numbers this week dropped from the previous week, with an estimated 105.3 million bushels of corn used.  This was down 4.7 million from the previous week but remained above the weekly total needed to hit the current USDA estimate.  Ethanol stocks jumped again, and margins remain negative, suggesting production may slip some more in the coming weeks.  Informa released an updated estimate on acres this week for the 2020 crop and are expecting 93.4 million acres of corn this year (compared to 89.7 last year), with a production estimate of 15.3 billion bushels versus 13.7 billion in 2019.

Soybeans followed through on last week’s weakness, pushing lower over the course of this week.  March futures closed down 7-1/2 cents on Friday to settle at 902, down nearly 28 cents on the week.  November futures finished 8-1/2 cents lower at 938-3/4, down 21-3/4 cents for the week.  Soybean prices continued to be pressured by the lack of detail on the trade deal with China, particularly with the timing of business.  With harvest beginning in Brazil, expectations are that China will look to South American origin soybean in the near term as they are a discount to US values.  An influx of business from China will likely be pushed back until after the harvest flush of exports from South America.  There has been talk that the USDA will account for Phase 1 of the trade deal in the February WASDE report, which may shed some light on whether they have any insights into the agreement that has not been released to the public.

Also weighing on prices are expectations for a large crop in South America.  Forecasts continue to call for the potential of too much rain in Brazil, and too little in Argentina, but that may not have a large impact on production.  Early yield results from Brazil are showing record yields.  For the 2020 crop year in the US, Informa is estimating the farmers will plant 86.5 million acres of soybeans, up sharply from 76.1 million last year but below 2018 planted acres.  Their production estimate for 2020 comes in at 4.368 billion bushels compared to 2019’s crop that totaled 3.558 billion bushels.

Wheat closes lower on Friday and mixed on the week.

Wheat prices slipped back to finish out the week, despite continuing to trend higher in general.  Chicago March futures finished 7 cents lower at 573-1/2 on Friday but still managed to finish 3 cents higher on the week.  KC futures closed down 6-1/4 at 486, settling 8-1/4 lower on the week.  Minneapolis March led the wheat market lower, closing down 8-1/4 cents at 547-1/2, and down 12-1/2 on the week.  The technical picture for wheat has looked overbought, suggesting the market could be set for a correction, and today’s price action may be the beginning of that.  The wheat market has been supported in general buy increasing world wheat prices, particularly Russian and EU values.  However, the Chicago market was unable to clear resistance in the 600 area.  More help from world prices will likely be needed to continue the trend higher for wheat in the near term.  Informa is estimating a slight increase in acres and production of wheat for the 2020 crop.

After six consecutive up days in the spot cheese market, it pulled back slightly today. The losses were led by barrels falling 2 cents today. Blocks were only down 0.75 cents. The spread between blocks and barrels remains abnormally high at 38 cents. Whey was the only dairy product to trade higher over the spot session finishing up 0.5 cents at $0.365. Butter prices continue to struggle closing the week at a disappointing $1.86/lb. Non-fat was down slightly losing 0.25 cents to end the week near the highs at $1.2875/lb.

Class III contracts were down marginally today after the first negative cheese session in 7 days. It was interesting to see the Class IV contracts trading higher on the day despite a poor performance from butter and non-fat powder today. Some may be thinking that the spread between Class III and Class IV has gotten a bit wide as it approached $1.00 again. 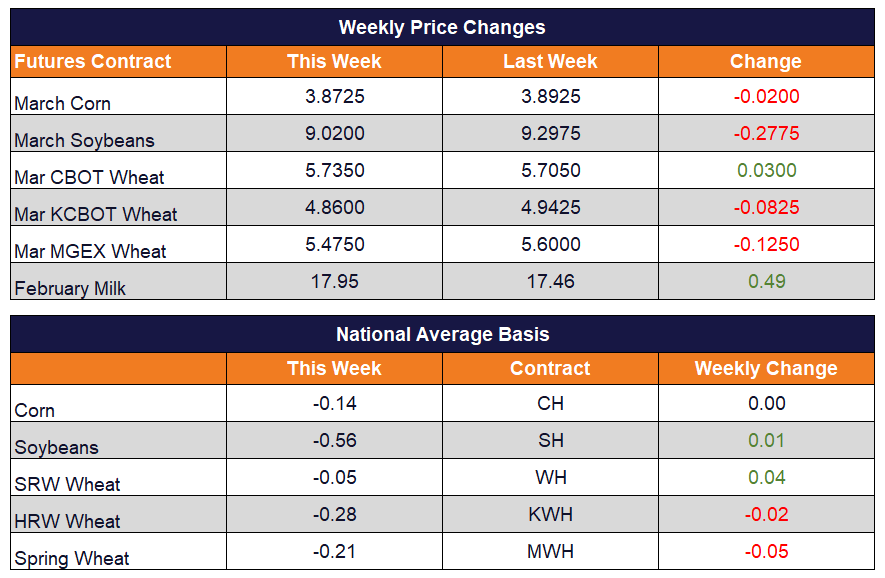