Corn slides lower for a second week in a row
March corn futures lost 13-1/4 cents this week to close at 420-1/4. December 2021 corn futures lost 5-1/4 cents this week to close at 409-1/4. After trading to new contract highs on Sunday night, the corn market faced selling pressure nearly all week while trending lower. With Friday’s close lower, the corn market has now traded two consecutive weeks lower. This has not happened for the corn market since early August when corn traded below $3.10 per bushel. The deficit continues to grow between corn export sales on the books and actual shipments. Marketing year corn export sales to date exceeded the USDA’s seasonal pace needed by 230 million bushels, a 15-million-bushel bump from last week. Actual shipments on the other hand fell short of the pace needed by 142 million bushels. This gap between sales and shipments may look concerning but it is still early in the marketing year with plenty of time for shipments to catch up. Exporters shifted much of their attention to soybean exports during and following harvest as export demand was red hot.The largest “black eye” for the corn market continues to be the ethanol side of the demand equation. Domestic ethanol inventories climbed to a 24-week high according to this week’s Energy Information Administration Ethanol report. Implied demand fell below 800,000 barrels per day for the first time since June 12 according to Wednesday’s data. Blending activity, the best indicator of demand, dropped to 21,000 barrels per day for the week ending November 27, this is 12.2% lower than the same week in 2019. A continued increase in COVID cases has clipped the wings of gasoline demand across the US.

January soybean futures lost 28-3/4 cents this week to close at 1163. November 2021 soybeans lost 19 cents this week to close at 1038-1/4. After reaching record-high levels, spot prices for soybeans in Brazil’s largest soybean producing state, Mato Grosso, have started to ease back. Spot prices for soybean in the state last week declined 6.5% to $161.53 Real per sack ($13.85 US dollars per bushel). This was the first weekly decline in soybean prices after many weeks of moving higher. Soybean prices in the state have been well supported by firm demand from China and weather concerns across much of South America. There are very few soybeans available in the state and many buyers are out of the market due to the record high prices.

Export sales of US soybeans last week were by far a marketing-year low and the lowest for the week since 2008. China accounted for a majority of the sales including 369,000 tons switched from unknown. Year over year soybean sales are still 102% above 2019, but the once blistering sales pace has gone cold in the last month. Soybean meal and oil sales were also on the low end of expectations this week. The US has sold a record 52.3 million tons of soybeans as of November 26, China accounts for 57% of this total. Soybean export sales tend to slide lower in December and January but the lack of sales in the last three weeks has hindered the bean market from pushing higher.

Spot cheese finished off this week trading lower and retesting the previous lows at $1.49 from last week. This is also the same area that the spot cheese market found support back in August when the market went through a similar collapse in cheese price. This weakness is driving nearby contracts lower, but the contracts further into 2021 continue to impress as the Class III 2020 average was able to make a new high this week. The biggest question mark for the Class III market continues to be will the government continue government purchases into 2021? Class IV markets started to make some interesting moves as both powder and butter finished higher on the week. Butter has been particularly interesting as larger than usual volume has been pushing prices higher lately. End-users may be trying to take advantage of recent lower prices to purchase products ahead of time. 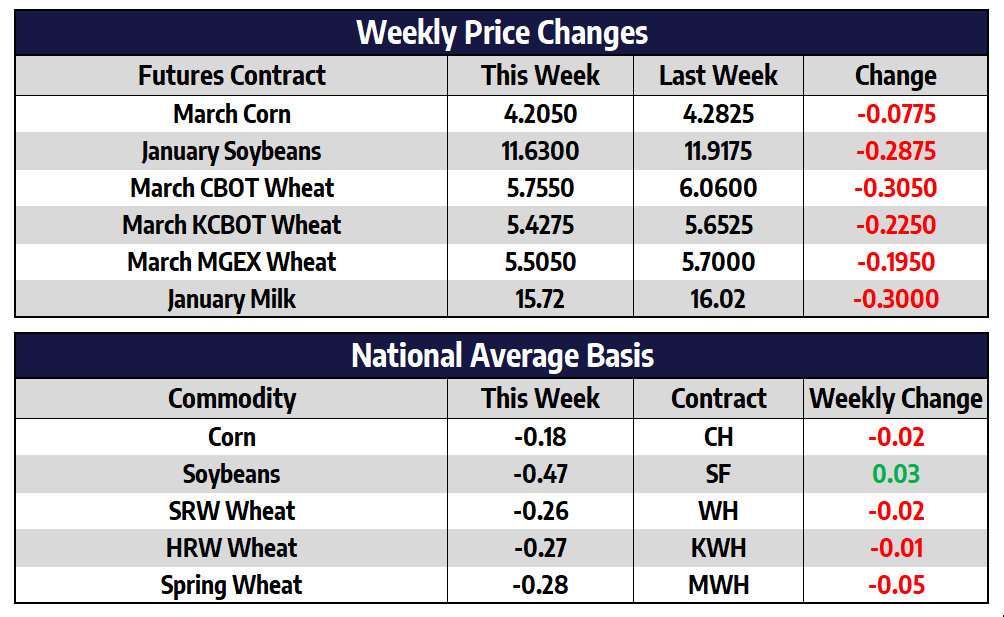