Corn lower this week as wheat and crude markets fall

Front month March corn futures shed 7-3/4 cents this week to close at 584. New crop December of 2022 futures shed 10-3/4 cents this week to close at 551-3/4. Given the sharply lower price action in the wheat and crude oil markets, corn bulls should be “happy” with how well corn prices held up this week. Corn used in last week’s ethanol production is estimated at 105.07 million bushels. Corn use needs to average 100 million bushels per week to meet this year’s USDA estimate. The Biden Administration is still late in their proposal for biofuel blends for this year and next year; traders await the proposals. The U.S. administration plans to propose in days the amount of biofuels oil refiners must blend into their fuel mix this year and next year. Many are hopeful the proposals will keep the positive momentum of the current ethanol market rolling.

The 40 cent range in which corn futures spent nearly the entire month of November could very well be the same story for the market here in December. Next Thursday’s USDA Supply and Demand update has historically brought little to no changes to the supply or demand side of the market equation. This status quo with lack of any fresh market news seems likely to keep the market range bound for the time being. Inflationary concerns continue to provide underlying support to the corn market. However, this week’s break lower in crude oil and toppy look to the broader stock market must be taken into account and may provide future headwinds for corn.

January soybean futures added 14-1/2 cents this week to close at 12167-1/4. New crop November of 2022 soybean futures shed 6-1/4 cents this week to close at 1234. U.S. processors crushed 196.9 million bu of soybeans in November, according to USDA. That marked a new record for any month, topping the 196.5 million bu crushed in October 2020 and was up 20% from September. Through the first two months of 2021-22, crush totaled 361.1 million bu, down 1.8% from the same period last year. The USDA is forecasting domestic crush will rise 2.3% from last year to a record 2.2 billion bu, so pace needs to pick up to meet that goal. The US will need a record domestic soybean crush this year to keep in check world supplies as Brazil is set up for a record crop once again.

Dryness concerns are increasing in southern Brazil as forecasts continue to dry up into late December. Brazil’s southernmost state, Rio Grande do Sul, received less-than-normal rainfall during the month of November and has continued that deficit into December. These dryer than normal conditions are typical during a La Nina, but most of Brazil has not experienced dryness as of late. Brazil as a whole is still expected to produce a record soybean crop given their great start to the growing season, but a dry finish could take some shine off of the expected record crop.

Class III and IV milk futures finished the week with double digit up moves during Friday’s session. Support for class IV came from the fact that butter added 2c and was able to close back over the $2.00 per pound barrier. Support for class III came from strong bidding for whey, with spot whey up 1.25c on Friday to $0.6975/lb. The rally today in second month class III was 48c to a $18.77 settlement. This puts that contract up 10c for the week. Meanwhile, second month class IV added 29c on Friday to $19.60, adding 37c total for the week. The class IV trade still holds a premium over the class III market, as strong butter and powder markets have supported. This week, the USDA announced November class III milk settled at $18.03 while November class IV milk settled at $18.79/cwt.

The dairy market continues to hold up at elevated levels and both class III and IV futures remain in steady uptrends. Support comes from high feed costs, lower milk production growth, declining cow numbers, and strong exports. Upcoming news and reports the market will be watching include a Global Dairy Trade auction next Tuesday, dairy export sales data released next Tuesday, and the USDA Supply and Demand report next Thursday. 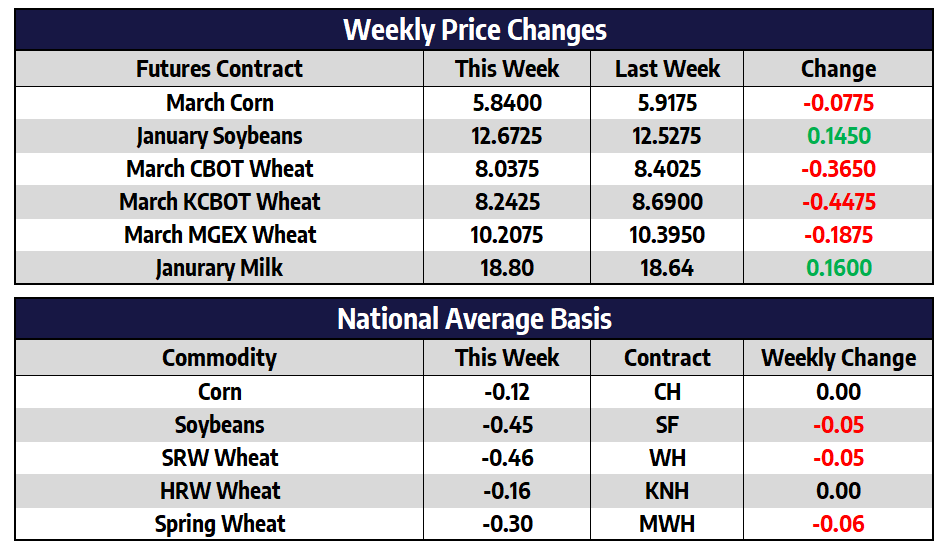