March CBOT corn were 9-3/4 cents lower this week to close at 538-3/4. December corn futures lost 3 cents this week to close 448-3/4. The USDA confirmed the following export sales of US corn this morning. 135,644 tons to Costa Rica ad 115,577 tons to Guatemala for the current marketing year. A sale of 59,694 tons to Costa Rica for the 2021/22 marketing year was also confirmed. That’s 12.2 million bushels of corn across the three sales in total. Chinese Ag futures went on holiday yesterday for the Chinese Spring Festival (Lunar New Year) and will resume trade on Thursday the 18th. US markets will also take an extended weekend break remaining closed on Monday the 15th in observance of Presidents day. Market quietness into an extended weekend is not uncommon, especially after the extended run grains have had since the first of the year.

The USDA will hold its annual Agricultural Outlook Forum next week Thursday and Friday. USDA’s Agricultural Outlook Forum began in 1923 to distribute and interpret national forecasts to farmers in the field. Since then, the Forum has developed into a unique platform where key stakeholders from the agricultural sector in the United States and around the world come together every year to discuss current and emerging topics and trends in the sector. During the Forum, USDA Chief Economist unveils USDA’s Outlook for the domestic agricultural economy and trade for the year. A Bloomberg Pre-forum survey estimates 20/21 corn planted acres to come in at 92.9 million acres bringing ending stocks up to 1.725 billion. This will be the markets first look at USDA acreage guesses ahead of the March 31st planting intentions report.

March soybean futures added 3-1/2 cents this week to close at 1370-1/4. November futures added 9-1/2 cents this week to close at 1170-1/2. Abundant rains in recent weeks in Argentina have lifted forecast for soybean and corn harvests, according to a revised outlook higher by the Rosario grains exchange. The exchange raised their soybean harvest estimate to 49 million tons, versus 47 million in their January estimates. The exchange noted in their report that the recent rains have been a “turning point” in the season and banished any fears of a repeat 2018 drought that caused major crop losses. Argentina is the world’s top exporter of soybean oil and meal, the moderate La Nina in recent months have caused uncertainty over upcoming production. For now, the drought worry looks to be eased as crop estimates continue to creep up in both Argentina and Brazil.

Conab this week estimated Brazilian soybean crop near 133.8 million metric tons versus 133.7 million previously. With China on holiday for the Lunar New Year over the next week and Brazilian harvest in full swing, market news should remain quiet. Thursday’s USDA Ag Outlook Forum will be watched closely by traders, however. With soybean stocks to use being tied with the lowest reported ever acreage outlooks for 2021 will be continually monitored. A Bloomberg survey conducted this week estimated 2021 US soybean planted acres at 90 million and ending stocks at 179 million bushels. This would be up from the 83.1 million planted acres in 2020 but would do little to lift carryout given strong demand remains in place.

All wheats lower this week
March CBOT wheat fell 1-1/2 cents this week to close at 642-3/4. March KC wheat fell 2-1/4 cents this week to close at 623. MPLS spring wheat on its march contract lost 10 cents this week to close at 616. USDA’s domestic carryover was left unchanged this week at 836 million bushels. USDA made no changes to supply or use. Global wheat carryover for 2020-21 was estimated at 304.2 million tons down 9 million tons from last month. The USDA noted in the February WASDE this week that “China’s domestic corn prices continue to be at a premium to wheat, encouraging greater wheat feed use. Additionally, increased auction volumes of old-crop stocks in China have expanded the availability of feed-quality wheat.” Cold temperatures over the extended weekend will keep the trade watching for winterkill prospects. No one will know the extent of any damage until wheat comes out of dormancy this spring, however.
Milk Volatility Continues

This week continues to show the sporadic price action in milk as we had a limit up day in multiple contracts on Thursday and finished Friday with prices trading as much as 40 cents lower in some contracts. The market seems to be looking for an excuse to go higher, but at the same time, there hasn’t been enough price action in the spot markets to justify the large up days we have been seeing in the nearby contracts. That being said, some of the more deferred contracts into the second half of the year have been on the rise. The July to December average traded to a new high all-time high on Thursday. This helps support our recommendation to remain patient for the second half of the year despite volatility in the nearby contracts.

From a weekly perspective in the spot market, cheese actually finished lower despite milk futures finishing slightly higher. The block/barrel average was down 4.625 cents to settle at $1.52375/lb. Whey traded to a new high for 2021 in the spot market and in the national dairy products sales report this week it showed whey being priced at the highest levels since 2017. Butter also had a tremendous recovery and this looks to be related to the recent increase in global prices making our prices look cheap vs. the rest of the world. Non-fat powder had a bit of a slow week as prices barely shifted, trading 0.75 cents lower at $1.1125/lb. 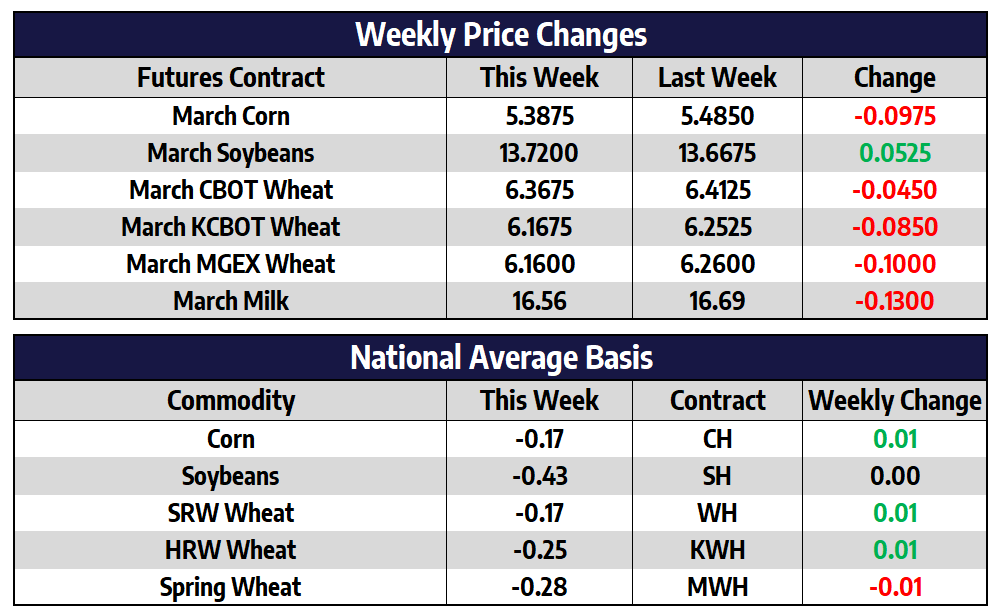