March CBOT corn added 4 cents this week to close at 542-3/4. December corn added 11-1/4 cents this week to close at 460. The USDA outlook forum held this week gave the market a first look at potential supply and demand projections for the upcoming 2021/22 crop year. At an estimated 92 million acres of corn planted and trendline yield production would jump over 1 billion bushels from last year coming in around 15.2 billion. A projected 450 million bushel jump in ethanol and feed demand as well as a 50-million-bushel bump to exports would keep stocks to use right in line with the current 10.3%. Again, these are all initial projections for 2021/22 which will move throughout the year with the first official USDA projection being planted acres on the March 31st Planting intentions report.

The second crop Brazil corn will be planted later than normal and monitored closely by the trade. Argentine areas look dry over the next few weeks but short-term crop conditions in Argentina are favorable. The lack of new sales to China and continued hurt on the ethanol demand side of the market are also adding weight to price action. The market closed lower on Friday after attempting to make a new high for the week. This is the third consecutive week of non-bullish price action for front month corn.

Soybeans continue mostly sideways to higher
March soybean futures added 5-1/4 cents this week to close at 1377-1/4. November futures added 23-1/4 cents this week to close at 1196-1/4. At the Outlook Forum, the USDA put out supply/demand tables this morning with crush for the 21/22 season pegged at 2.21 billion bushels, up from 2.20 billion bushels this year. Exports are expected to decline just 50 million bushels to 2.2 billion and leaving ending stocks at 145 million bushels as compared with 120 million this year. Acres are projected at 90 million planted which would be a 6.9 million acre increase from last year. The outlook relies heavily on continued record strong demand but leaves the market vulnerable to any production hiccups this summer.

No daily export flash sales were reported by the USDA this week. The public holiday in China for the Lunar New Year wrapped up late this week but sales tend to be lighter during China’s holidays. The last sale explicitly to China was during the last week of January. With US prices at elevated levels, near record amounts of exports on the books and the South American export season just heating up, US export sales could be few and far between into the summer. The market has been sideways in the last few weeks but continues to remain in a weekly uptrend that dates back to August.

The butter market has been depressed for quite some time and is finally showing some signs of life over the last couple of weeks. Butter prices finished the week up 15.5 cents at the highest price of 2021 so far, $1.55/lb. The weekly close above this level looks bullish for the market, especially with the recent rise in global butter prices as well. On the other side of the fat market, cheese prices are trending lower but made a bit of a reversal today as block prices rise higher and barrel prices moved lower. If the cheese market can make it back over $1.50/lb next week the market may have found substantial support near the lows of the year.

Class III and Class IV futures were mostly lower across the board today, as premium in the deferred contracts was taken out of the market. Futures are still pricing in a strong recovery in Class III and Class IV markets. The slow movement of the cheese market will continue to drag on March through May futures as the market will take premium out of the market as cheese prices remain low. 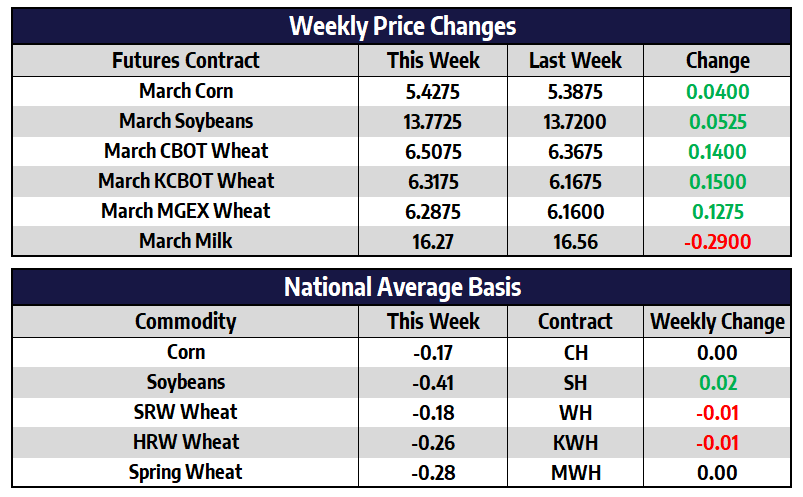