Ukraine suspended shipping at all of its ports this week. Ukraine on average was exporting about 4.5 million tons of corn per month. Russian warships shelled multiple vessels this week in the black sea. On Friday a tanker carrying over 600 tons of diesel and a Panamax ship heading to load grain were both hit. Both ships were hit near the Ukrainian port town of Odessa. Many questions have yet to be answered on the situation in Ukraine and its impacts on the global commodity markets.

Soybeans trade briefly above $17 this week

Chinese soybean meal prices hit a record high last week topping over 4,000 yuan per ton. This converts to about $630 US dollars per ton. Soybean inventories were low heading into the end of January, a current lack of supply will cause Chinese soybean crush plants to slow or even suspend production. Chinese hog producers are experiencing negative margins with the record high input costs. China’s latest round of US soybean purchases have been mostly for new crop soybeans and have avoided the much higher priced old crop stocks.

After yesterday’s strong push to the topside, many commodities fell back to end the week and milk was no exception. In the Class III trade, the soon-to-be second month April contract closed 38 cents lower Wednesday, limit up 75 cents yesterday, and 75 cents lower today which was 18 cents off the daily low with expanded limits. Along with the heavy losses in the feed markets, the spot market added to the pressure. Spot cheese closed 6.1250 cents lower at $1.9225/lb, falling again just beneath the $2.00/lb mark. This totals 3.8750 cents lower on the week after entering Friday’s trade higher. Spot whey was unchanged at $0.78/lb today but is down 3 cents on the week. While the outside markets certainly add to the volatility, the Class III complex has clearly struggled at $23.00 milk on the second month at $2.00/lb in the block/barrel average so far through two months of the calendar year. 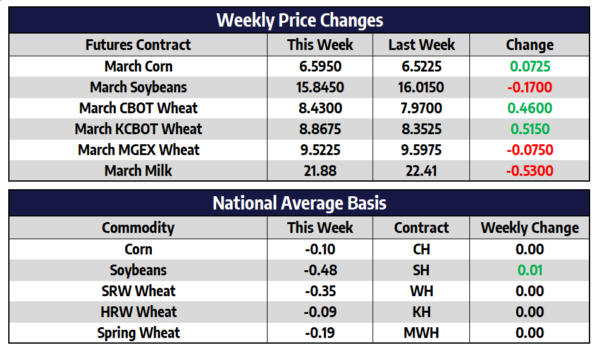