With a strong day on Friday, March corn moved 2-1/4 cents higher this week to close at 383-1/2. December corn closed at 394 up 3-1/4 cents on the week. The current US corn export pace is off to its worst start since the drought of 2012/2013. The US export total since September 1 came in at 9.3 million tons, down 37% from the five-year average. In previous years when corn exports were this lackluster to begin the year (2015-2017), sales were generally strong to finish the year due to shorter South American crops. That does not look to be the case this year as both Argentina and Brazil look to be experiencing rather fair weather as we push through their growing seasons. With a record crop coming out of Ukraine, as well as prospects for larger than normal crops coming out of South America, the USDA export forecast may need to be once again lowered here early in 2020. The one factor that could change the entire picture would be increased corn purchases from China yet this year.

The USDA Office of the Chief Economist released a report this week indicating that adjusting their export forecasts higher due to the new trade agreement on upcoming WASDE reports would be a difficult task. Working off the publicly released details of the Phase 1 deal no specific quantities of commodities have been announced. Corn products included on the laundry list of items China will buy to meet the roughly 36 billion agreed upon include ethanol, DDG’s, and corn syrup. Most see China living up to its commitment for 2020 and 2021 as a long shot.

March soybeans were 9-1/2 cents higher this week closing at 882 while November soybeans closed at 918-1/2 up 6-1/4 cents on the week. Soybean harvest is estimated to be about 26% completed in Mato Grosso, Brazil’s largest soybean producing area, reports are that farmers are quickly planting their second crop corn behind the combine. As a whole, Brazilian soybean harvest is estimated at 9% complete which compares with 19% last year and 9.8% as the historical average according to AgRural. Scheduled shipments out of Brazil show close to 7 million tons of soybeans will be exported in the month of February. This total is about 2 MMT above the February 2019 total. The indication of increased shipments shows demand is heating up and the Chinese continue to buy. Given the harvest time frame and US dollar vs Brazilian real value, Brazilian soybeans are the cheapest bean in the world.

Reports came out Friday that Chinese President Xi has told President Trump that China would still meet its Phase 1 trade deal purchasing targets despite delays linked to the coronavirus. US soybean shipments in the last four months have been 27% higher than the same time frame in 2018-2019 but this year’s pace is 24% lower than the five-year average. Chinese buying will need to step in here in the coming months to meet the current USDA yearly export target of 48.3 million tons.

Wheat works back towards recent highs

Chicago wheat was 5 cents higher this week to close at 558-3/4. KC wheat was 7 cents higher on the week to settle at 472-1/2. MPLS spring wheat was 2 pennies higher closing at 535-3/4. The wheat market moved higher this week on reports the coronavirus may be fairly contained. Price action this week kept the general uptrend in the market and points to new buyers on this recent pullback. The rally in the US dollar is the major limiting factor in the wheat market at the moment. The dollar extended its rally to start February pushing into new 3-1/2-month highs. Traders are looking for US wheat stock to shrink on Tuesday’s Supply and Demand report. This could be seen as supportive given the stronger than normal export pace to start the marketing year.

Every product in the spot market was higher today other than butter. We saw futures prices moving higher after yesterday’s announcement of the decrease in tariffs on goods imported to China from the U.S. and there was additional follow through on the spot trade today. The biggest benefactors from these changes would be the whey and non-fat powder, which we did see close at the highest prices of the week. The block/barrel average was also but once again blocks are outpacing barrels in price movement bringing the spread back to 45 cents. A major threat to market prices if blocks close the spread downward. Butter prices remain the dog of the dairy complex losing 6.25 cents on the week to close at $1.8325 vs. 2016 low of $1.755 (Lowest price of the last 5 years)

Class III futures followed the spot trade higher today as the majority of contracts pushed higher. While futures appear to be enjoying trade optimism, it was noted today that the virus spreading in China could delay purchases. This tug-and-pull of the trade issue continues to be a factor in the market despite the signing of a Phase One trade agreement. Class IV futures are not rallying as much as butter prices detract from price improvement in non-fat powder prices. 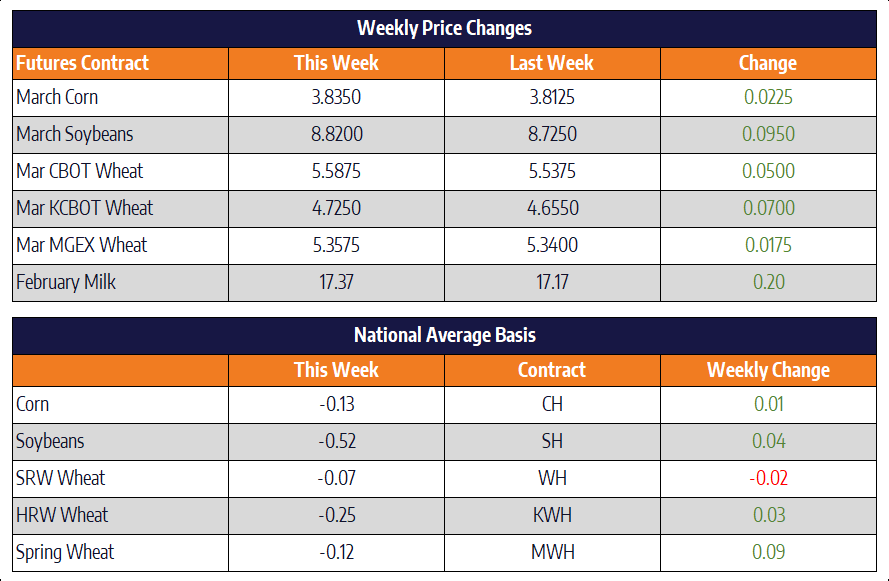