May corn futures added 10-1/2 cents this week to close at 762-1/2. December corn futures added 25-3/4 cents this week to close at 655-1/4. The USDA boosted its outlook to US corn exports for the current marketing year this week reducing ending stocks to 1.44 billion bushels. Market interest remains on Ukraine with this weeks WASDE report behind us. Ukraine’s spring planting would normally be getting underway soon, but the size of this year’s production remains in question. Some analysts believe an optimistic scenario would be 50% of Ukraine’s grain area being planted this spring. If a resolution to the conflict is reached quickly the odds of a more normal production year will increase dramatically.
The US exported over 287 million pounds of beef in January, this was down slightly from December but the highest amount for the month of January ever. Countries accounting for the record number in January include China and South Korea who continue to increase their appetite for higher quality protein. The USDA raised its 2022 beef export projection by 30 million pounds in this month’s report, but shipments are still expected to decline 4.3% from last year’s record.

May soybean futures added 19-1/4 cents this week to close at 1676. November soybean futures added 40-3/4 cents this week to close at 1491. Rains last weekend and early this week helped stabilize late planted soybeans in Argentina. While the early planted soybeans are already halfway into their pod filing stage, the later planted beans have just begun to fill pods. These rains will go a long way in helping save the later planted beans from disaster. The USDA pegged the Argentina soybean crop at 43.5 million tons, this would be down from the 2020/21 crop which came in at 46.2 million tons.
Issues may be on the horizon for global soybean demand as the world’s largest soybean buyer, China is showing signs of a possible economic slowdown. Chinese stocks listed in the US on Thursday endured their worst day of trading since the global financial crisis. The Nasdaq Golden Dragon China Index plunged 10% late this week posting its biggest percentage slide since October of 2008. China has been struggling to climb out of the COVID pandemic slump as domestic restrictions continue to limit travel. A slowed Chinese economy would not be friendly to increasing their soybean demand in 2022/2023.

Within the Class III market this week, the second month April contract finished 30 cents higher but 86 cents off its weekly high. The deferred months saw some good buying to end the week and the overall calendar year average added 22 cents Friday for a weekly total of 42 cents, closing at $22.90. Spot cheese put together a solid week with 4 cents of gains and a close at $2.10/lb, off a bit from its 16-month high of $2.15875/lb posted on Wednesday but still hanging above $2.00/lb for now. Spot whey closed out the week unchanged at $0.7575/lb, a mark that has now held for six trading days. Some mid-week weakness was not a huge surprise given the recent rally and the fact most contracts finished higher on Friday despite a 5.125 cent fall in cheese was a good sign. 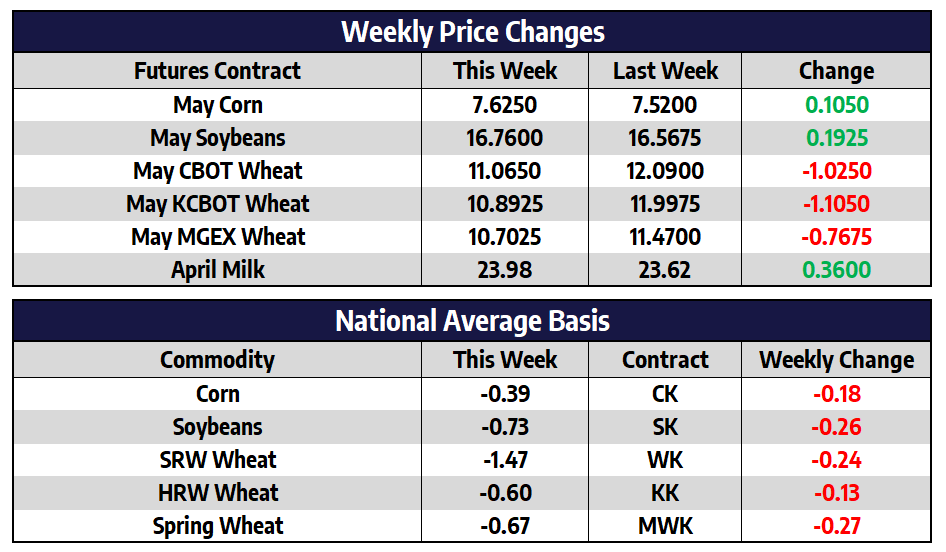