Corn lower for second week in a row

May CBOT corn lost 6-1/2 cents this week to close at 539. December corn futures lost 2-3/4 cents this week to close at 478-3/4. Corn shipments in the 2020-21 marketing year have been below average in just one month so far, September. Corn exports have gained speed since and have continued to trend above historical levels. According to US Census Bureau data released last week, January corn exports of 5.8 million tons were the second largest ever for the month, nearly 60% above normal. February exports may have topped 6 million tons for the first time ever. The current record for the month is 5.4 million tons back in 2008.

Brazilian farmers in the state of Mato Grosso do Sul continue to struggle to harvest their soybeans and to plant their safrinha corn. In their weekly bulletin, the Agriculture and Livestock Confederation of Mato Grosso do Sul indicated that the second crop corn planting was 32.5% completed as of last Friday, which is 27.5% slower than a year earlier. Although the ideal planting window closed this week, farmers are willing to plant their corn later than normal due to the very strong domestic corn prices. Corn prices in the state are very good at approximately $6.20 per bushel. This is 66% higher than last March when corn prices averaged approximately $3.60 per bushel.

May CBOT soybeans fell 16-3/4 cents this week to close at 1413-1/4. New crop November futures lost 3-1/2 cents this week to close at 1243-3/4. Brazils official crop firm Conab raised their soybean production estimate this week to a record high 135.1 million tons as compared with 133.8 million in February and 124.8 million tons last year. Fears that a variant of the African Swine Fever will continue to slow the hog herd expansion in China has triggered more weakness in Chinese meal prices. Yongyi Consulting out of China has reported that the Chinese sow herd has dropped more than 5% in each of the last two months. China’s ag ministry which had been quiet on ASF has announced six new outbreaks this year, four of which have come in the last month. The ASF situation in China is likely to get worse before it gets better.

China’s most actively traded meal futures fell once again this week for the biggest decline in more than two years. Front month CBOT soybean meal futures have lost over 70 dollars a ton in the last two months. A close this week below the 100-day moving average for soybean meal is an indicator of a longer-term trend change to lower. The last time soybean meal closed below the 100-day moving average was mid-August. On the other side of the crush complex, soybean oil futures have rallied higher in 7 of the last 8 weeks. Edible oils around the world have continued to push higher since last fall. This divergence between soybean oil and soybean meal has led to sideways but choppy soybean prices in the last two months.

With the volatility taken out of the dairy market over the past couple of weeks, the market has been steadily working higher on relatively light volume. Friday’s price action saw contracts lose some of their earlier week gains in the nearby months, but overall class III milk still had a green finish. The class IV market had another quiet week of trade, with most nearby contracts losing about 20c. The market will now turn its attention to next week’s release of the February milk production report. The report should shed some light on the production trend moving forward. If the USDA revises the January production higher and we see yet another strong increase in February, it could turn the market bearish in the short term.

In addition to the milk production report next week, there will also be a Global Dairy Trade Auction event. With the most recent event up 15% and pushing higher for the eighth straight auction, the market will be anxiously waiting to see if global prices can rise even further. Expect a volatile week ahead due to these two events. Recapping this week’s spot market, spot cheese added 5.125c, whey added 1.25c, butter gained 2.50c, and powder fell 0.75c. Short term trends for the spot markets are mixed for cheese and powder and up for both butter and whey. 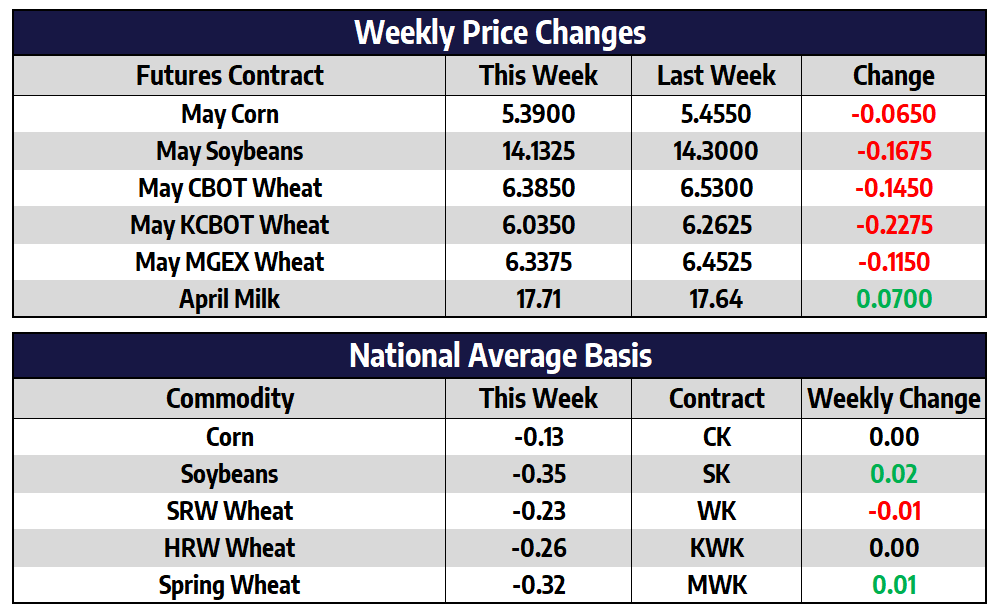