Avian influenza continues to spread across the US as migratory birds continue to move north as the weather warms up. This week it was announced a commercial flock of over 2.75 million egg-laying chickens in Wisconsin will be culled to prevent the spread of the highly lethal form of avian flu after birds on the farm tested positive for the disease. More than 6.7 million commercial birds have already been culled nationwide since February when the disease first appeared. Poultry consumes more corn than any other species accounting for about 1.8 billion bushels annually and also represents 67% of domestic soybean meal consumption. The last major avian influenza outbreak in 2015 resulted in the culling of 7.5 million turkeys and over 42 million laying hens in an attempt to eradicate that strain. While the bird flu does not pose an immediate public health concern, the birds from infected flocks will not enter the food system.

May soybean futures shed 8 cents this week to close at 16.68. New crop November soybean futures shed 27-1/2 cents this week to close at 1463-1/2. Front month soybeans have remained range bound since their spike higher in late February. Fresh soybean supplies out of South America should keep front month beans range bound to lower in the near-term. US President Joe Biden and Chinese President Xi Jinping had a two-hour long call today discussing the situation between Russia and Ukraine. Biden described the implications and consequences if China provided material support to Russia. The administration did not immediately publicly detail what those consequences would be, but much like the 2018 US/China trade war, commodities would more than likely be caught in the crossfire.

One year after experiencing the largest deforestation of the Amazon rainforest in the last 14 years, Brazil set a new deforestation record in February. Data from Imazon’s Deforestation Alert System, which has been monitoring the Amazon through satellite images since 2008, says February of 2022’s deforestation was nearly 70% higher than February of 2021 and a new all-time record for the month. Imazon believes over 15,000 square kilometers are at risk of deforestation between August 2021 and July of 2022. This equates to over 3 million acres.

May CBOT wheat futures shed 42-3/4 cents this week to close at 1063-3/4. May KC wheat futures shed 18-3/4 cents this week to close at 1070-1/2. May spring wheat futures shed 10 cents this week to close at 1060-1/4. Much needed widespread rains of greater than a half inch fell over a large portion of the Plains Thursday afternoon into Friday morning. Longer-term outlooks for the region continue to anticipate dryer than normal weather will persist in the months to come. Russia has had a rather strong last two weeks of shipping wheat despite reports the country was planning on all but stopping exports for the time being. While Ukraine’s ports remain closed, Russia’s ports are open for business and moving grain steadily according to Black Sea analysis SovEcon. Freight rates are substantially higher but so are prices because importers still need wheat, no matter the country of origin. With Russian crude oil exports drastically lower than months prior, Russian grain companies have a strong incentive to ship as much grain as possible, especially if they are exchanging the grain for US dollars; this gives them a much-needed foreign currency. Despite this news for old crop Russian wheat, many questions still remain for the upcoming 2022 wheat crop in the Black Sea region.

Dairy rebounds late in the week

Class III milk futures had an up-and-down week as commodity market pressure and the spot cheese trade have kept price action volatile. The commodity market ran into some selling pressure earlier in the week on talk of a ceasefire between Russia and Ukraine. There was speculation they could be headed toward a peace agreement. At the same time, cheese sellers were getting aggressive, and cheese buyers were nowhere to be found. The block market was down a total of 14c on Tuesday and Wednesday combined, while barrels fell 5c over that stretch. It had looked at the time like spot cheese was on the verge of losing the $2.00/lb level. By week’s end, commodity pressure eased and cheese buyers returned to buy 8 loads of blocks and 16 loads of barrel cheese. This put the block/barrel average back up to $2.08/lb at week’s end.

The USDA will release the February 2022 milk production report next Monday followed by the monthly Cold Storage report on Wednesday. It could be another volatile week of trade as the market digests this data. Recent data has shown a steady drop in US cow numbers since the May 2021 peak along with tighter production across the country. Cheese inventories have been steady to higher, while butter inventories have been steadily on the decline. There will also be a lot of eyes watching to see if spot cheese can hold over the $2.00/lb handle. The powder and butter spot markets have cooled down in recent weeks. 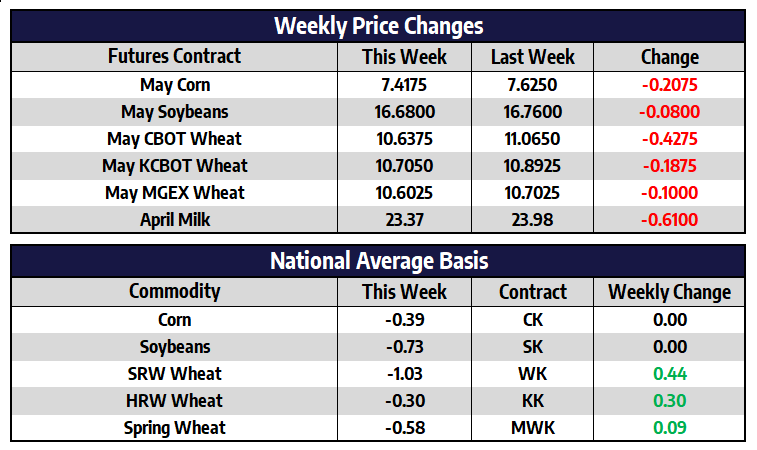