July CBOT corn futures added 11 cents this week to close at 573-3/4. December futures added 15-3/4 cents this week to close at 512-1/4. Corn planting across the Midwest is expected to be slow going over the next 10 days, as colder than normal temperatures are predicted to plague much of the US east of the Rocky Mountains. Many producers have reported soil conditions are near perfect for planting, but soil temperatures have trended lower in the last week, deterring producers from running planters full bore. Chinese corn imports January to March totaled 6.73 million metric tons, up 438% versus the same period in 2020. Even with these mammoth corn imports, Chinese corn is trading at a premium to the wheat, and this has encouraged a shift to more wheat and less corn usage for feed. The USDA estimated in last weeks WASDE report Chinese wheat for feed at 40 million tons up from 35 million last month and up from 19 million tons last year.

July CBOT soybean futures added 24-1/4 cents this week to close at 1422-1/2. November soybean futures added 10-3/4 cents this week to close at 1274. NOPA’s March crush numbers came in at 177.9 million bushels or 5.74 million bushels per day. This was 2 million bushels below the average pre-report estimate. March 31 soybean oil stocks came in above February at 1.771 billion pounds, which was in the range of expectations. The colder temperatures forecasts across the Midwest over the next two weeks should not be of a concern to soybeans as of yet given planting has yet to take off across much of the affected area. The USDA in a virtual data users’ meeting this week said it has launched a ‘top-to-bottom” review of the Grain Stock Report. The Stock report was a dominant topic in the meeting given the large revisions to corn and soybean stocks in the last 12 months.

Chinese soybean imports totaled 7.7 million tons in March up 82% from a year ago. Cumulative January to March imports now total 21.2 million tons up 19% from a year ago for the same period. China’s official imports for the first half of the marketing year, September through March, came in a record 47 million metric tons, up 5.2 tons from last year. China is also projected to receive record monthly soybean imports for the months of April and May.

After three strong down days in the middle of the week for class III milk, buyers started finding value mid-afternoon on Thursday and began getting active again. This buying pressure continued into Friday’s session in which contracts recovered a good chunk of what was lost the three days earlier. At week’s end, May class III milk was down 42c this week while June class III fell 33c. May class IV actually finished a penny higher this week while June class IV fell 13c. The market remains in an overall uptrend and the fact that buyers defended the support levels late in the week is a positive sign the rally could continue. High feed costs and questions about milk production growth this year are keeping a bid under milk. Nearby class III contracts are pushing over $19 again while the further out class IV contracts are back over $17.

Market trading early next week could be quiet as market participants await three important events. First, there will be a Global Dairy Trade auction next week Tuesday, the 20th. These auction events always have the possibility of moving the US market. Heading into Tuesday, the GDT Price Index is up 9 out of the past 10 auction events. Second, the USDA will release its March milk production report on Wednesday. The market will look to see which way milk production is trending. Will these high feed costs slow production yet? Finally, the USDA will release a cold storage report on Thursday, updating us most importantly on butter and cheese cold storage levels in the US. 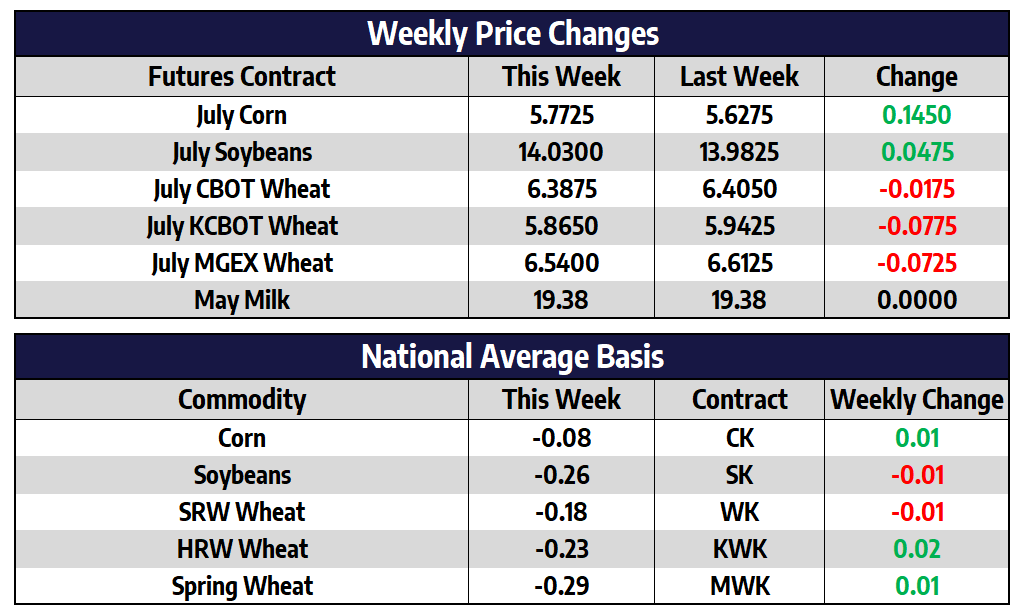