May corn futures exploded higher this week gaining 70 cents to close at 655-1/2. December futures added 38-1/2 cents this week to close at 550-3/4. China canceled 2 old-crop corn cargoes according to Thursday’s weekly export sales data release. Fund buying shook off the negative news however on Thursday sending May and July corn futures lock limit 25 cents higher. To close the week on Friday front month corn had rallied over 22% off its March 30th low, a $1.17 gain in just 17 trading days. Corn was already technically overbought at begin this week and is now extremely overbought and vulnerable to a rather large correction. After this week’s cold snap early on corn planters got to work to finish the week and should have a pretty favorable window the next few days until some much needed rain arrives the middle of next week.
The Rosario grains exchange on Wednesday raised Argentina’s corn crop to 50 million metric tons up from 48.5 million tons last month. If realized this would be the third largest crop on record. The exchange noted the increase to a higher planted area than previously expected and better yields in many spots. The USDA in their latest WASDE report had the 2020/21 Argentina crop pegged at 47.5 million tons. The Brazilian government announced earlier this week the suspension of import tariffs for grain imported from outside the Mercosul Trading block. The suspension will be in place through the calendar year 2021 and will include corn, soybeans, soybean meal and soybean oil. Tight domestic supplies, strong domestic demand and concerns about the second crop corn all played into the suspension of the tariffs.

May CBOT wheat futures were 57-3/4 cents higher this week to close at 710-1/4. May KC wheat futures added 64 cents this week to close at 673-1/4. May spring wheat futures added 54-1/4 cent this week to close at 718-1/2. Wheat was once again a follower of corn and soybeans higher this week. CBOT wheat at its peak this week had rallied over $1.20 since its recent low at the end of March. The early week cold and snow across much of Kansas and Nebraska may have damaged some of the growing wheat crop. Time will tell whether or not yield potential has been hampered. News broke Friday morning that China had purchased at least 500,000 tons of French wheat this week. A domestic corn shortage and rising global corn prices have caused China to look to other grains to fill their feed needs.
Dairy Markets Finish Choppy Week Higher

The dairy markets finished the week with three up days and two down days, as prices continue to weigh a balance of different factors in the market. We received two important fundamental reports this week with milk production and cold storage. Both of these reports looked to be bearish, as milk production finished just above trendline production growth at 1.8% YoY. Milk production numbers weren’t overly bearish, but the Cold Storage report was one of more concern. Growth of cheese in cold storage came in at the highest levels since 2019 at 7% growth YoY.

Milk futures finished the week at strong levels with May through August of Class III all finishing above $19.00/cwt. Class IV continues to make decent gains as the spread in the market between Class III and Class IV shrinks the further into 2021 you go. This shows that the futures market is optimistic that Class IV can continue to improve towards the latter half of 2021.  While spot market prices were mixed this week, the surge in grain prices this week also keeps an artificial level of support in the market. Price action in the whey spot market looks toppy as prices slammed lower from 70 cents to 62 cents. The non-fat powder market’s momentum on the breakout over $1.20/lb continues as the market finished at a new high for 2021 of $1.2525/lb. 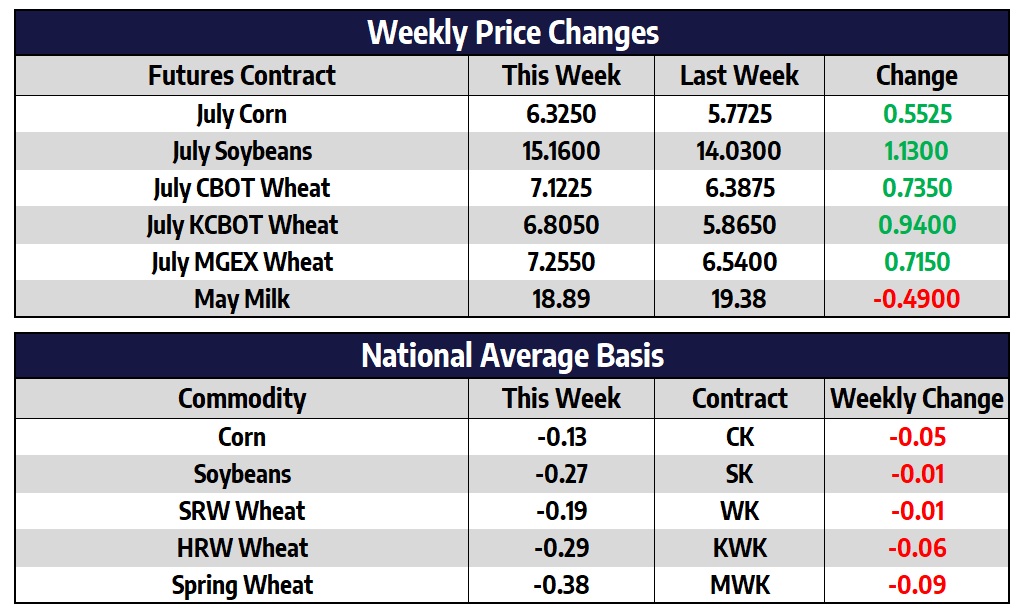