July corn futures fell 88-1/2 cents this week to close at 643-3/4. December futures tumbled 93-3/4 cents this week to close at 542-3/4. With planting nearing completion across much of the corn belt and an inch plus of rain forecast for a majority of the corn belt over the next week futures prices were under pressure this week. Aggressive selling from fund traders and speculators sent prices limit lower (40 cents per bushel) on Thursday. This amount of volatility in the market is more than likely here to stay in the coming months as the market trades US weather. This week’s drought monitor showed improving conditions from much of Iowa, Illinois and Indiana. Many feel consistent summer rains will be more important this year than previous years due to below normal sub-soil moisture levels.

China bellied up to the table in a big way this week booking over 147 million bushels of US new crop corn for deliver in 2021/22. China did cancel some old-crop corn that was booked according to this week’s export sales numbers but the new crop sales this week have well out weighted the old crop cancellations. It is unusual to have this many new crop, 2021/22 corn bookings this early on. As of May 6th, China had about 1.36 million tons of new crop US corn on the books, with this week’s sales that totals should be over 5 million tons, roughly 200 million bushels.

Beans Hold Up Well this Week Compared to Corn

July soybean futures lost 3-1/2 cents this week to close at 1586-1/4. November futures fell 32-3/4 cents to close at 1400-3/4. While corn futures were in freefall this week, soybean futures held up fairly well. The market remains overbought however and still vulnerable to a correction. Pressure was added to the soybean market this week as a cracked bridge over the Mississippi River halted vessel traffic. This slowed crucial movement of grains and soybeans to export terminals in the US gulf. Support on November soybeans should show up near the 1360 mark, this was the previous highs in April and the low during Thursday’s blood bath sell off.
Chinese state media reported this week that the countries sow herd grew 1.1% from the prior months and 23% from April 2020. The data showed that the sow herd in April stood at 97.6% of the pre-ASF end of 2017 level. Other data out of China will be more difficult to come by as an Influential Chinese farm consultancy, Cofeed, has suspended operations without explanation. Reuters found out on Wednesday that the door to their supposed address had been sealed by police on April 29th, the day they stopped updating their soybean meal stocks, crush margins, and other data.

July Chicago wheat shed 54-1/2 cents this week to close at 707-1/4. July KC wheat lost 79 cents this week to close at 657-3/4. July Spring wheat fell 56-3/4 cents this week to close at 740-3/4. Short-term weather looks favorable for improving crop conditions with plenty of rain for Kansas and Oklahoma. Some relief may also be in the cards for North Dakota in the two-week forecast. Weakness in corn this week spilled over into wheat as wheat remains a follower. SovEcon raised their forecast for Russian wheat production by 1 million tons to 81.7 million tons this week on an improved weather forecast. The weekly export sales report showed that for the week ending May 6, net wheat sales came in at 30,290 tons for the current marketing year and 268,042 for the next marketing year for a total of 298,332. Cumulative sales have reached 97.2% of the USDA forecast for the 2020/2021 marketing year versus a 5-year average of 98.2%. Sales need to average 44,000 tons per week to reach the USDA forecast.
Dairy Shows Weakness Late In Week

The trend for both class III and IV milk futures remains steadily higher, as dairy has been closely linked to the current run-up in feed. Although, some heavy selling pressure in grains later in the week started to spill over to the dairy trade as well. The second month June class III milk contract fell 2c lower on Thursday and another 22c lower on Friday. The July contract fell 20c on Thursday and 20c on Friday. The market remains at strong price levels, but if feed can’t sustain this rally, there could be trouble ahead for dairy. Milk production across the country has remained high all year and slaughter rates aren’t as strong as you’d expect, given the high feed cost situation. Taking advantage and protecting revenue at these higher milk prices in an incremental approach makes sense. Nearly all current 2021 milk contracts are over $19 per cwt and there are starting to be some $18’s popping up in the class IV strip as well. Dairy news was quiet this week, but next week there will be a Global Dairy Trade and milk production report. 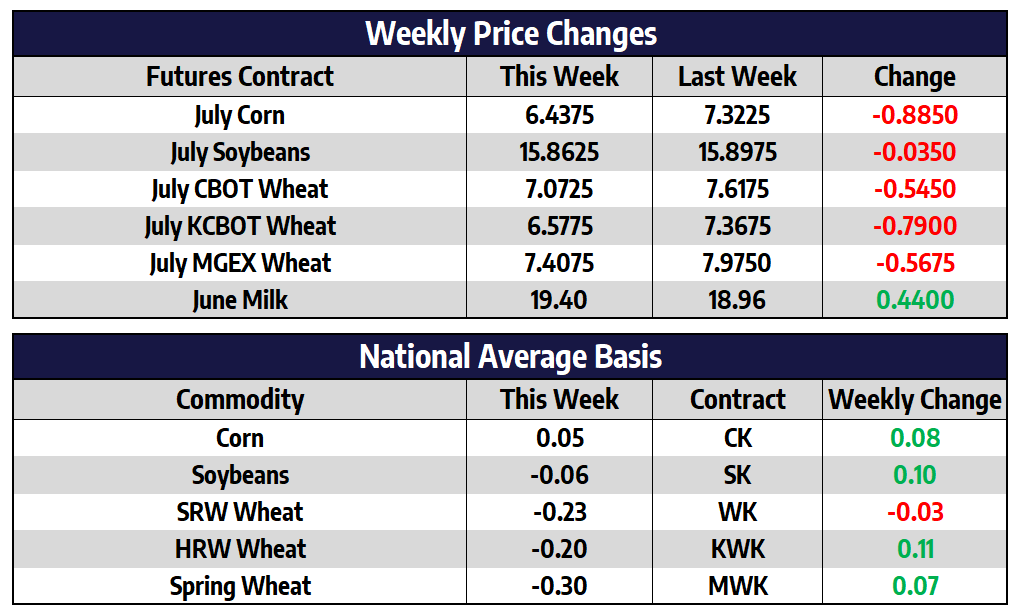