CBOT July corn futures added 59 cents this week to close at 732-1/4. New crop December futures added 72-3/4 cents this week to close at 636-1/2. Buying interest switched to new crop December futures this week, as the December contract saw its best week ever for the contract, adding over 70 cents. Dryness in Brazil continues to shirk yield potential as some area in the far South have gone more than 45 days without significant precipitation. Weather in the US seems to be improving, as planting keeps chugging along and rainfall is expected in the coming days for those who most need it in western corn belt.

The market remains extremely overbought but has defied gravity in the last three weeks, adding nearly a dollar and a half on front month corn. US corn for export is not competitive on the global market given this recent rally, but domestic demand has picked up the slack. Spot basis levels have strengthened in recent weeks as futures prices have continued marching higher; this is rather uncommon. Lack of farmer selling due to spring field work and fears of domestic corn shortages come late this summer are believed to be driving the recent basis strength. Ethanol demand has also been stronger as of late. March ethanol grind was up 25.7% from February as gasoline demand continues to inch towards pre-pandemic levels.

July CBOT soybean futures added 55-1/2 cents this week to close at 1589-3/4. New crop November futures added 93-3/4 cents this week to close at 1433-1/2. CBOT November soybeans continued their slide versus December corn futures this week, even as November futures added over 90 cents. The November soybean versus December corn spread traded down to 2.25 this week, implying the market is more worried about new-crop corn supplies rather than new-crop soybean supplies. Historically, when spring planting has gotten off to a quick start, farmers have planted more corn acres than initially intended. As corn prices have continued to rise, about 33% since March 1, most traders expect heavier corn acres than what farmers were expecting to plant back in March.

US soybean crushers crushed 188.2 million bushels of soybean during March; this was up 23.9 million bushels from February but below the March of 2020 record. Soybean crush needs to average 177.8 million bushels per month for the last five months of the marketing year to hit the USDA’s 2020-21 forecast. Brazil’s soybean exports are expected to decline in May after a record 17.4-million-ton month in April. A slowed crush pace in China due to resurging African Swine Fever is partly to blame for the expected slower pace. Brazilian ports are scheduled to load around 180 soybean vessels in May, down 70 vessels from the April record.

July CBOT wheat added 27 cents this week to close at 761-3/4. July KC wheat added 33-1/4 cents this week to close at 736-3/4. July spring wheat added 33-3/4 cents this week to close at 797-1/2. Oklahoma is likely to produce a wheat crop of about 110 million bushels this year, a 10% increase above the 10-year average for the state. Oklahoma’s crop has reportedly faired better than others in the region as drought and freeze stress seem to be minimal this year. The US spring wheat crop was 49% seeded and 14% emerged as of last week Sunday, that’s 17% ahead of normal for the seeding pace. North Dakota, the top spring wheat producing state has been very dry since last fall. Similar dry years to start include 2008 and 2018, both years saw decent yields, 2018 set a record. So, while moisture levels are very short currently this does not mean a death sentence for the spring wheat crop, timely summer rains will be the deciding factor.
Spot Markets Mostly Lower, Outside Markets Supportive

It was not a good week for dairy spot markets. Butter was the lone product that was able to eek out a slight week-over-week gain; otherwise cheese, whey, and nonfat all closed the week lower. As the US hits what should be the peak of the flush season this month, spot prices of Midwest milk are reportedly ranging from $4.50 under to $0.50 over Class, with the average around $2.00 under. Class III and Class IV markets were lower today and lower on the week: May C3 -36c, Jun C3 -97c, May C4 -14c, & Jun C4 -27c. Feed markets were significantly higher on the week with July corn +57c, July beans +59c, July meal +14.7d, & July wheat +30c. The US Dollar lost nearly a full 100 points this week from 91.28 last Friday, to 90.30 today. Much of that drop occurred today as the dollar fell 66 points following a disappointing US jobs report. This week’s dollar decline should help offset some of the competitive advantage that US dairy products lost earlier in the week, following a weaker GDT auction that saw prices for cheese and butter drop -4.5% and -12.1%, respectively. No major dairy reports are scheduled for release next week. The USDA will release it’s May World Supply and Demand Estimates at 11:00am CT on Wednesday, which will likely be a catalyst for additional grain market volatility next week. 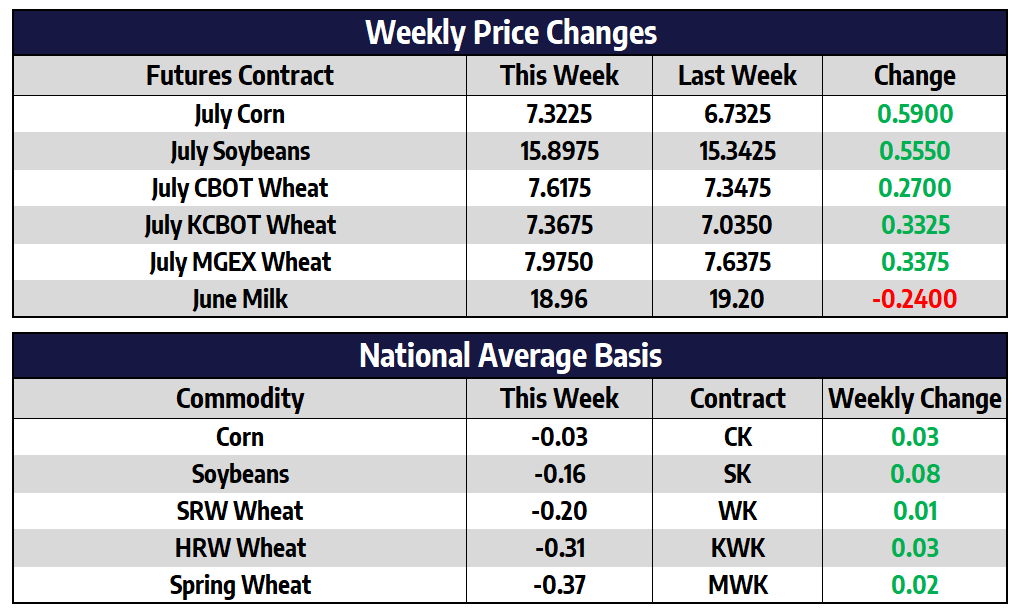