Soybeans push back near recent highs

Milk futures capped off a back-and-forth week with mostly red on the board as the September Class III price fell 30 cents to $19.80, but was still 50 cents higher on the week. Help came from spot cheese which garnered 7.75 cents to the topside to hurdle back above the $1.80/lb mark with a close at $1.86625/lb. Within the Class IV products, spot butter dropped 7.50 cents on the week to $2.9350/lb with powder up 1.50 cents overall, leading to a 19 cent drop for the second month September contract. Price direction remains lower for Class IV futures, while the Class III market is attempting to build a base after the recent selloff. The only fundamental update next week will be Tuesday’s Global Dairy Trade Auction, which has fallen nine out of the last ten events. 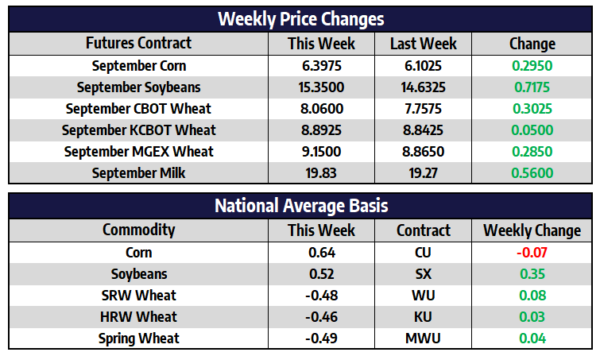