December corn futures added 16-3/4 cents this week to close at 553-3/4. As of August 19, the US has 759 million bushels of corn sold for the 2021/22 marketing year that will begin next week. This is the most US corn sold on the books for the date in at least the last decade. China accounts for about 45% of this total but has been quiet on the new crop corn buying front since about May. Without their purchases this corn sales total would look closer to average.

The EPA sent a draft plan for setting biofuel-blending quotas to the White House. This marks the start of formal interagency review process for how much renewable fuel such as corn-based ethanol and soy-based biodiesel must be mixed into gasoline and diesel in 2021 and 2022. The proposal could be released by the EPA within weeks. The review is not expected to fall in the favor of the ethanol industry according to many close to the matter. Ethanol is currently estimated to account for 35% of US corn demand in the 2021/2022 marketing year.

November of 2021 soybean futures added 32-1/2 cents this week to close at 1323-1/4. March futures added 32 cents this week to close at 1329-1/4. Rains fell across much of the drought stressed northern corn belt this week, as a frontal boundary parked itself along the Minnesota/Iowa border. Some localized areas have picked up over 10 inches of rain in far northern Iowa over the last 72 hours. While these rains may have come later than wanted by many, they will still help the soybeans fill pods and replenish soil moisture after spending nearly all of the growing season in a moisture deficit.

As we inch closer to harvest here in the US, trade attention will quickly shift to South America as they enter their growing season. The peak planting window across Brazil will occur between September 10 and October 10 for first crop soybeans. While drier-than-normal conditions persisted across much of Brazil into early November, the soybean crop still managed to come in at a new record for the country by nearly nine million metric tons. Brazil’s 2021/2022 soybean acreage is expected to increase by 4-5%, which would be at a record 100 million acres.

Class III milk futures worked to the downside for the second week in a row as the market gives back what was gained earlier in the month. For the week, September ’21 class III lost 30c to $16.76 while October fell 43c to $16.62. Some pressure is coming from the fact that the recent spot cheese rally has fizzled out right near trendline resistance. Demand for cheese lacked this week in the spot trade. Regional cheese reports across the country still show positive signs. There is talk that spot milk availability is not as readily available as it once was and the $2 or $3 discounts below market are gone. There is also talk that some cheese plants have had to turn away new orders. With production tightening up after the spring flush, this should be a supportive factor moving forward.

The class IV trade had a good week, with some contracts up for the third or fourth week in a row. September ’21 class IV milk added 28c this week to $16.17, and is currently 72c above the July low. The fact that spot butter and spot powder prices are curling higher again is a supportive factor there. Also, recent GDT auctions have shown better global demand for the class IV products. The next GDT auction isn’t until September 7th, though. 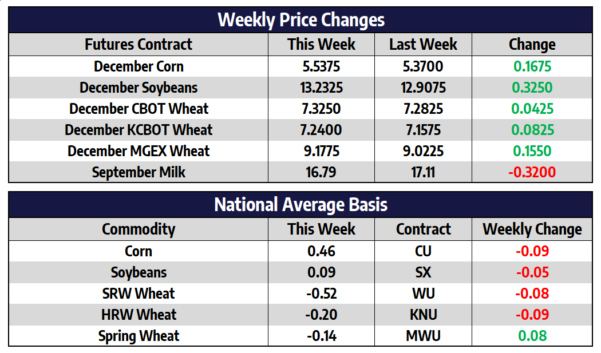