Corn futures stuck in a range

September corn futures were down 0-1/4 cent today to close at 555. New crop December corn futures finished 3-1/2 higher today to close at 556-1/2. The first week of August saw corn prices move slightly higher, but still in a sideways trend. The December corn contract is solidly wedged between the 100-day average (support) near 540 and the 50-day average (resistance) at 560. A breakout of this range should trigger some technical buying. It will take some widespread threatening weather, or bullish numbers out of the USDA next week to drive the market higher. For now, US weather forecasts for the next week to 10 days are calling for the Midwest to see scattered, isolated rains but hot temperatures. Two widely watched market analysts came out with their estimates for next week’s USDA Supply and Demand report. Their US corn yield estimates range from 176.5 to 176.9 compared to the USDA’s trend line estimate of 179.5 it has used in the past three reports. New-crop US corn sales last week were better than trade expectations at 32 million bushels and higher than last week. This helped to keep prices supported into the weekend.

September soybean futures finished 8-1/2 cents higher today at 1344-1/4. November soybean futures 8-1/4 cents higher to close at 1336-3/4. Despite the last three days higher closes, soybean prices finished lower on the week as weather forecasts look favorable for crop development. Some parts of the Northwest received rains overnight. Soybeans were able to recoup some of Tuesday’s losses as the last two days saw export sales announcements of a combined 431,000 mt (15.8 million bushels) t0 China and unknown destinations. Some pre-report estimates for the August WASDE report next Thursday show US soybean yield estimates from 50 bushels per acre to 51.5 bpa compared to the USDA’s 50.8 average on the last report. A Bloomberg survey has trade estimates running from 49.3 to 51.4 and the average of guesses at 50.3 bushels. The balance sheet for US soybeans is historically tight with latest estimates for carryout to be just 155 million bushels in 2021/2022. It would be unusual for the USDA to make a large reduction in yield on this report as August weather has a large impact on final yield. In six of the last seven years, the USDA has increased soybean yield estimates in their August WASDE. The seventh year, 2019, the soybean yield estimate was left unchanged.

The Class III Milk market finished the week on the right foot with three up days on Wednesday, Thursday and Friday. The second month September contract finished the week up 7c to $16.43, despite hitting an intraweek low of $15.75. October finished the week up 10c to $17.04, after hitting a low of $16.43. Positive price movement in the spot whey market may have spurred some buying demand. Whey finished the week at $0.54/lb, after adding a total of 6.50c over the past two days. The cheese price remains below $1.50/lb, which should add some resistance to Class III. The block market held steady all week at $1.6350/lb with no loads traded. Barrels fell 8.50c this week to $1.31/lb on 19 loads traded total.

For now, high feed costs and strong exports continue to support the market, while overproduction and a weak cheese price add resistance. The USDA reported export data this week for the month of June. Exports for June 2021 came in 4% higher than the same month last year. The past twelve months have averaged a 10% gain in exports on a year-over-year basis. The demand is still there globally, despite a weaker Global Dairy Trade auction market over the past few weeks. Be sure to log into your TFM360 client portal for updates on how current hedges are performing against the market. Let us know if you have any questions. 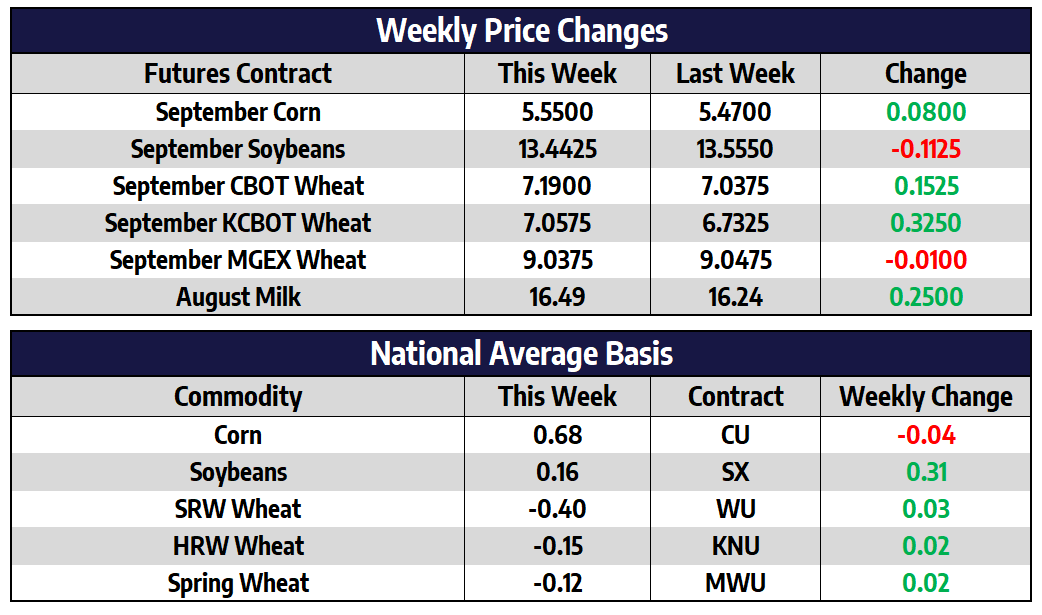